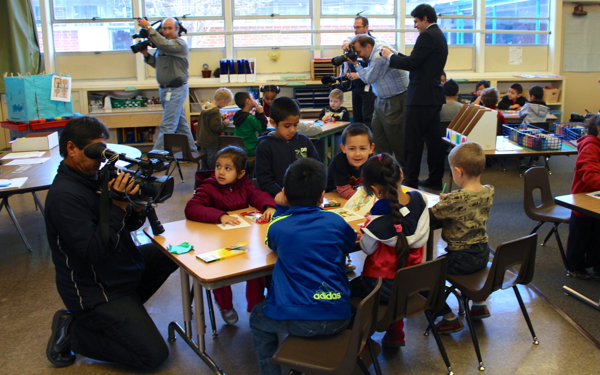 While Democratic leaders in both houses of the state Legislature have cited expanding transitional kindergarten as a top priority in the coming year, Gov. Jerry Brown’s proposed 2014-2015 budget did not mention the program – or include additional funding for early education of any kind.

“The budget speaks for itself,” Brown said in response to questions about the transitional kindergarten expansion at a news conference Thursday. “Wisdom and prudence (are) the order of the day. When you see this kind of (debt) liability (in the general fund) you have to hesitate before doing anything too major.”

Steinberg praised the governor’s fiscal prudence, but said it is time to consider new expenditures that would contribute to the state’s welfare.

“Expanding transitional kindergarten can be accomplished with just a fraction of increased Proposition 98 funds while saving billions of dollars in the long run by reducing the extra costs of special education, grade retention and juvenile crime,” Steinberg said in a statement. Brown’s budget proposal calls for an additional $10 billion for schools in 2014-15 under Prop. 98, the voter-approved school funding guarantee.

Calling Thursday’s budget release the “first act in a four act drama” before a state spending plan is approved, Steinberg told reporters that he and his colleagues hope that passing the Kindergarten Readiness Act of 2014 would become the Senate’s “signature accomplishment” in 2014.

Advocates have criticized Brown for a lack of support of early education during his tenure, even as he has ushered in reforms  restoring funding for K-12 programs. Advocates of the transitional kindergarten expansion said they will continue to lobby for the program. Assemblyman Al Muratsuchi, D-Torrance, chair of the Assembly Budget Subcommittee on Education Finance, said he plans to hold legislative hearings on the merits of investing in early education programs, including transitional kindergarten, this spring.

“I will remain optimistic that we can educate the governor on the merits of early childhood education programs,” Muratsuchi said.

Sen. Holly Mitchell, D-Los Angeles, was blunter in her assessment of the governor’s silence on early education. Chair of the Black Causcus and a supporter of Steinberg’s bill, Mitchell called for the cuts to early education programs – nearly $1 billion between 2008 and 2012 – to be restored. The governor has reinstated $55 million of those cuts.

“The governor missed a key opportunity to reinvest in our early care and education system,” Mitchell told EdSource.

However, even a supporter of the Senate bill praised Brown’s reticence to wholly embrace universal transitional kindergarten.

Chris Steinhauser, superintendent of the Long Beach Unified School District and an early education advocate, said Brown was smart not to commit to new spending that could put money from the state’s Local Control Funding Formula for schools at risk. The funding formula provides additional money to districts with high concentrations of low-income students; Long Beach Unified School District is set to receive an additional $60 million in the new budget, Steinhauser said.

“I’m a fiscal conservative,” Steinhauser said. “I would not want to do this (if it would) reduce the Local Control Funding Formula allocation” to Long Beach.

Transitional kindergarten can help students succeed in school, which is important to Brown, Steinhauser said. He’s optimistic that Brown will carefully consider the Senate and Assembly proposals.

“I don’t think (Brown) will shut the door on it,” Steinhauser said. “He’ll want to study it and look at it. He does believe in investment in kids and in closing the (achievement) gap.”