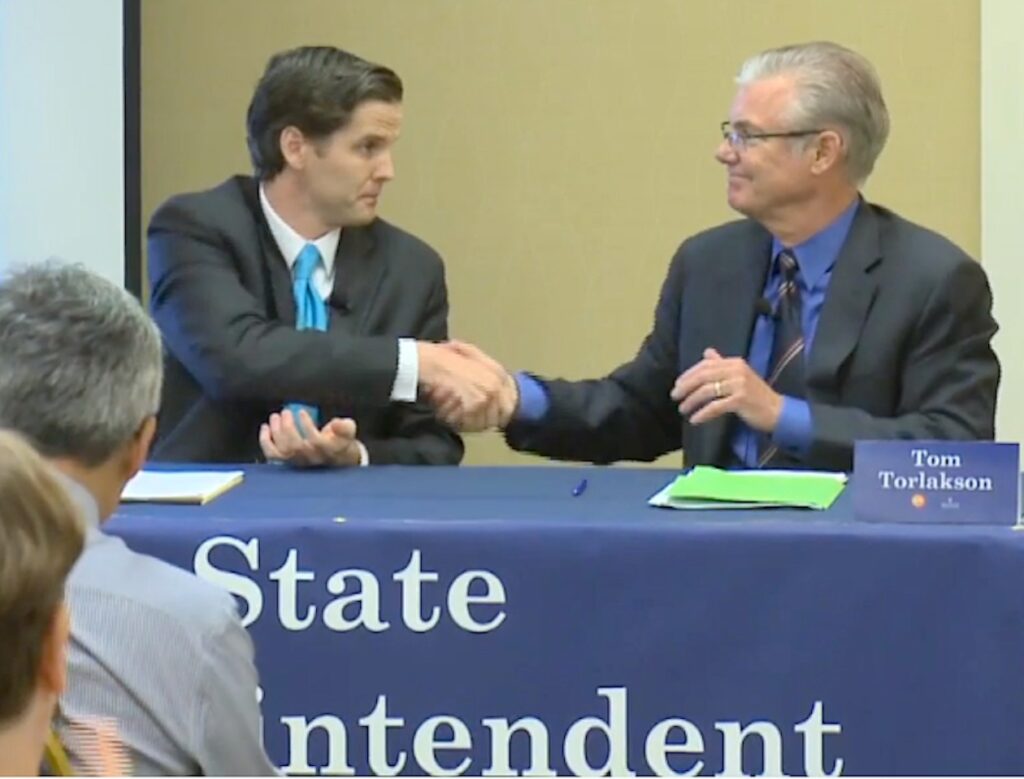 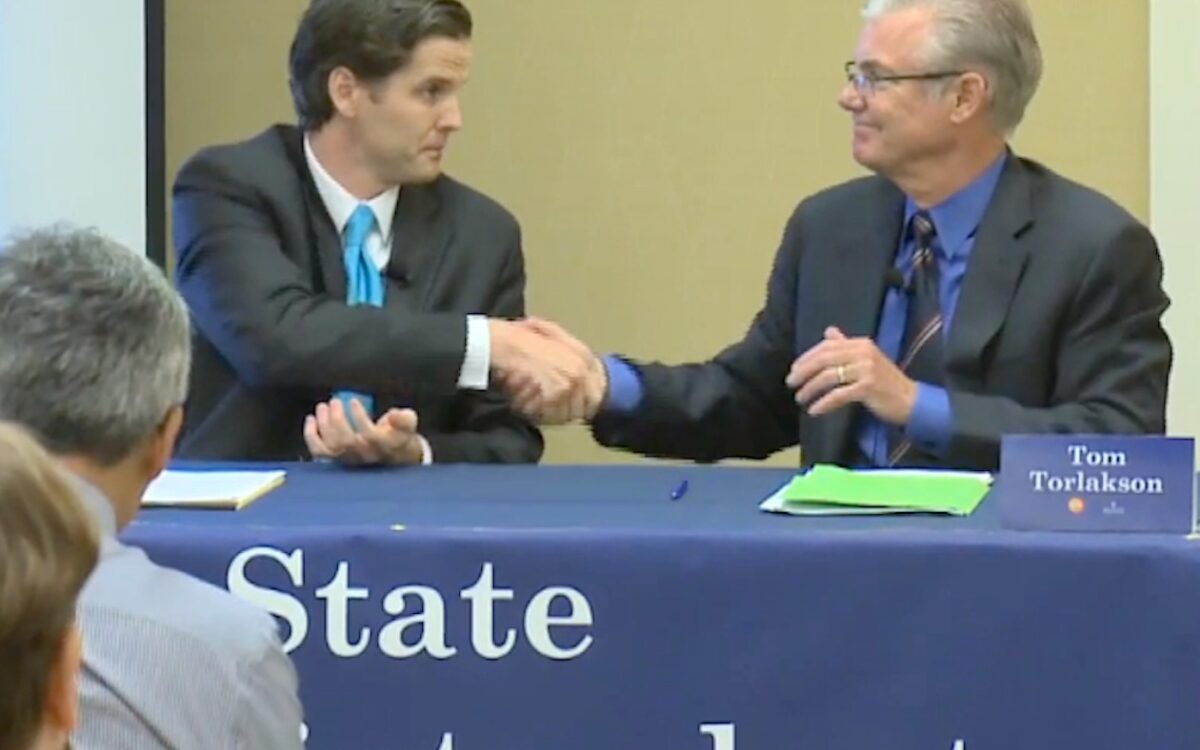 Spending in the race for California superintendent of public instruction has by far outstripped all other statewide races, including the campaign for governor. Although the superintendent has limited power, donors to incumbent Tom Torlakson and challenger Marshall Tuck are spending big sums to influence what they consider is at stake in this election: the direction of education reform.

At $30 million, the combined spending is triple what Gov. Jerry Brown and Republican challenger Neel Kashkari have spent in the governor’s race and it is the most expensive superintendent’s race since at least 2002, the earliest race for which online campaign finance data is available.

That puzzles David Menefee-Libey, a political science professor at Pomona College and co-contributor to the Education Week column “On California.” He said he can’t quite understand why there’s an arms race in donations for an office with little power under the state Constitution.

But the state superintendent is the spokesman-in-chief on education in California, said Raphael Sonenshein, executive director of the Pat Brown Institute for Public Affairs at Cal State Los Angeles. And he said although this race is non-partisan, it “reflects the biggest single conflict within the Democratic Party – school reform.” Tuck and Torlakson are both Democrats, and some of Tuck’s biggest backers, like Eli Broad, are too.

A barometer for reform

Torlakson, Gov. Brown and most Democrats in the Legislature have been aligned with teachers unions on labor issues, while leading the effort to make school funding more equitable, switch to the Common Core State Standards and revise the state’s assessment and accountability systems – sweeping reforms affecting schools. The California Democratic Party has contributed $325,000 through independent expenditures on Torlakson’s  behalf.

Tuck and his wing of reformers have clashed with teachers unions and their allies over increasing the number of charter schools, weakening teacher laws on tenure and dismissals, and using test scores to force school transformations, especially in low-income neighborhoods. However, Tuck also supports the Common Core and the Local Control Funding Formula.

Lately, the reformers in the Tuck camp  have been on the defensive, nationally and in Los Angeles Unified, where reformist superintendent John Deasy resigned after a series of crises, and candidates financed by Eli Broad and other Tuck supporters have lost school board elections. “The big wave of reform victories has crested and is receding,” Sonenshein said.

A win by Tuck “would be seen as a moral boost” for those supporting the reforms he is championing, he said. “If he loses, it would be a serious defeat, for he really had a big shot with a competitive campaign,” he said.

Andrew Rotherham, co-founder and partner at Bellwether Education, a Washington, D.C.-based nonprofit consulting firm and a frequent commentator on education reform, agreed that the outcome of the race should be a good measure of where voters are on the reforms Tuck and his supporters espouse.  “Is there a backlash against it?,” he asked.”Is it real?”

A win by Tuck “would be seen as a moral boost for reform folks. If he loses, it would be a serious defeat, for he really had a big shot with a competitive campaign,” Raphael Sonenshein said.

The latest Field Poll, the last before Election Day, calls the race a dead heat, with 28 percent of voters backing Torlakson or Tuck and 44 percent saying they’re undecided. With predictions of a light turnout on Election Day, supporters are spending a lot of dollars to reach a few voters.

Torlakson and outside groups spent about four times as much as Tuck in the June primary. Torlakson got 47 percent of the vote to Tuck’s 29 percent in a three-way race but fell short of the 50 percent required to avoid a runoff. Then came District Court Judge Rolf Treu’s decision in the Vergara v. California lawsuit, overturning the state’s laws on teacher tenure, dismissal and layoffs by seniority. Treu’s ruling, in which he said the laws “shocked the conscience,” gave Tuck a weapon to attack Torlakson, who is appealing the ruling. It also allowed Tuck to cast the state’s two teachers unions as a force resisting change.

“At this point, the anti-union Democrats who have real influence inside Democratic circles in a lot of places have not gained much power in California, where unions are still part of mainstream politics,” Menefee-Libey said.

“What the unions don’t want,” said Rotherham, a former board member of Democrats For Education Reform, “is someone the next four years talking honestly about what is working and not working in schools. Marshall understands education and can talk about it, and that makes him dangerous” to the unions.

Unions go all out

According to EdSource’s updated contributions and spending data on the race, the California Teachers Association has spent $11.2 million supporting Torlakson. The smaller California Federation of Teachers and the national American Federation of Teachers have spent at least $850,000 supporting Torlakson through independent expenditure committees. Other labor unions have given six-figure contributions to the CTA’s independent campaign fund for Torlakson, including $225,000 from the California School Employees Association, which represents bus drivers, cafeteria workers and other hourly school employees, and $950,000 from the state Council of Service Employees Political Committee.

“We see this as a key race determining the future of public education,” said Joshua Pechthalt, president of the California Federation of Teachers. “Tom Torlakson comes out of the teaching ranks, with a vision of public education consistent with ours.”

Under Gov. Brown and Torlakson, he said, California rejected federal policies like the reform-based Race to the Top grants and resisted standardized testing in the transition to the Common Core. “If Tuck wins, he’ll use his bully pulpit to disagree with Brown’s perspective, and wage a battle over Vergara,” he said. And, he added, those across the country encouraging similar Vergara lawsuits and anti-teacher reforms “will trumpet” Tuck’s election.

“We see this as a key race determining the future of public education,” said Joshua Pechthalt, president of the California Federation of Teachers. “Tom Torlakson comes out of the teaching ranks, with a vision of public education consistent with ours.”

A 30-second ad paid for by the California Federation of Teachers and the American Federation of Teachers, in which men in suits act like they’re repossessing a classroom, says that Tuck, “a Wall Street banker, is backed by interests that would turn our schools over to for-profit corporations motivated by money.”

The Tuck campaign called it an “over-the-top smear” that refers to a banking job Tuck had his first two years out of college.

Pechthalt said the ad “is intended to make a point about forces and money behind the Tuck campaign.” It’s “consistent with the corporate reform movement that, at the end of the day, looks to privatize and charterize public education and put hundreds of billions in their pockets.”

“The message is accurate even if elements are fanciful,” he said.

Twenty people have contributed at least $100,000 to Parents and Teachers for Tuck for Superintendent, the main independent expenditure committee backing Tuck that formed only this month and quickly amassed $9.6 million.

Most are Californians. They include:

Of these donors, only Bloomfield and Steve Chamberlin, on behalf of his wife Susan, who was out of the country, responded to questions about why they have donated to Tuck.

Bloomfield is at this point the single biggest donor to the campaign: a total of $3.5 million, including $2.25 million to Partners and Teachers for Tuck. A graduate of Palisades High School in Los Angeles and UC Berkeley, he ran a family-owned commercial laundry equipment company before retiring in 2006. He lives in Manhattan Beach and writes a blog that included a recent piece on why he and his wife give so much to political campaigns. It’s simple when it comes to Tuck, he said in an interview.

“I want great public schools that teach kids skills they need to have a good life in the 21st century – nothing more than that,” he said. He doesn’t have a solution to fixing schools and hasn’t given “a whole lot to charters,” he said, adding, “I have no skin in the game.”

But he said liked what he heard when he met Tuck and was impressed with what he did running Green Dot and the Partnership for Los Angeles Schools. Accused by Tuck opponents of opposing temporary taxes under Proposition 30, Bloomfield said he supported the alternative tax increase, Proposition 38. “I don’t mind high taxes if you get value for it – if kids in this state were getting an opportunity that my generation had.”

“I want great public schools that teach kids skills they need to have a good life in the 21st century – nothing more than that,” said William Bloomfield.  “I have no skin in the game.”

Steve and Susan Chamberlin each gave the maximum contribution – $13,200 – directly to the Tuck campaign, and Susan was listed as the donor of $100,000 to the independent committee for Tuck, though Steve said they both agreed on the contribution.

Steve Chamberlin co-founded Chamberlin Associates, a real estate development company in the East Bay, with Susan Chamberlin, an architect. He was an adjunct professor at the Haas School of Business at UC Berkeley. He said they decided to back Tuck after researching both candidates and meeting Tuck. “We are not casual people” when it comes to making political decisions, he said.

They live in Richmond and have been frustrated with the low academic achievement in the West Contra Costa Unified School District and what he considers the district’s wasteful spending on facilities. In part to prove that point, he bought and rebuilt a former private school in Richmond for Summit Public Schools’ new charter. The school moved in this fall and is leasing the campus, giving the couple a 1 percent rate of return, he said. His family foundation gives to successful charter operators and the Silicon Schools Fund, which gives grants to schools for blended learning, an academic approach that incorporates technology into learning.

Chamberlin favors Tuck, he said, because he will “rock the boat,” impact legislation and balance the power of the California Teachers Association. “He’s a fresh voice and won’t sing the party line.”

They would disagree with Tuck’s assertion that Torlakson embodies the status quo.

McMinn, a high tech entrepreneur turned vintner, served on Torlakson’s Education Technology Task Force and his transition task force in 2010. McMinn said that Torlakson has been a big supporter of the nonprofit to which McMinn commits much of his time, NapaLearns, which is seeding project-based learning and innovative use of technology in all schools in Napa County, he said.

Torlakson has visited the flagship school, NewTech High in Napa, and advocates providing students with technology, workplace skills and experiences through internships. “The problems with schools cannot be fixed one charter school at a time,” McMinn said.

CC Yin is a Chinese immigrant who worked as an engineer before buying his first McDonald’s restaurant. He now owns 32 restaurants in 12 California cities and is based in the East Bay, which Torlakson represented in the state Legislature. Yin invited Torlakson to events when he founded the Asian Pacific Islander American Public Affairs Association, which runs programs in youth leadership, voter education programs and health services. Torlakson was interested in better understanding the problems facing Asian Americans, Yin said, and offered good advice. “We need encouragement,” he said.