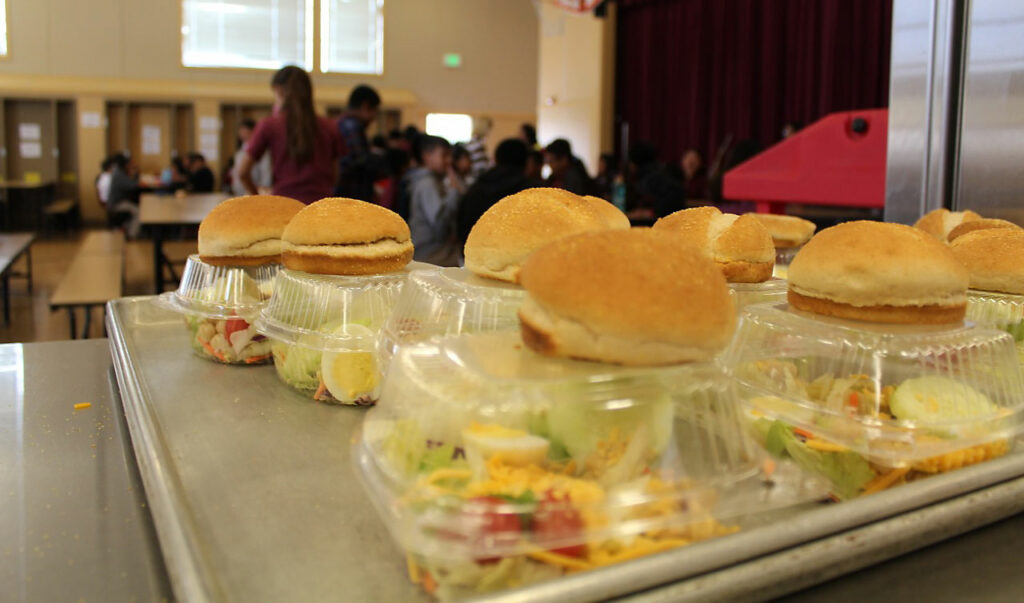 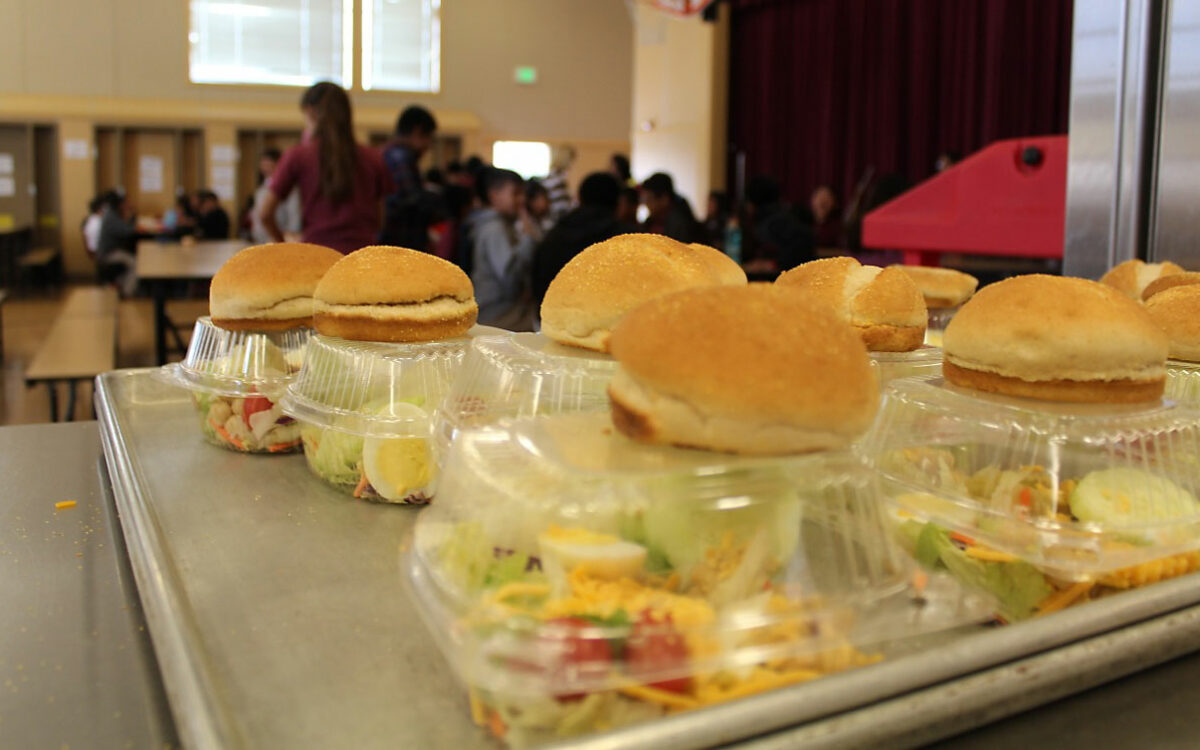 At long last, some school food service departments in California are going shopping, under orders from the California Department of Education to spend millions of dollars in federal and state school lunch funds that districts have failed for years to use for student meals, according to the department.

The spending plans were prompted by renewed financial oversight following last year’s report from the state Senate Office of Oversight and Outcomes, which stated that over a period of roughly a decade, the California Department of Education had ordered eight school districts to repay nearly $170 million to the school meals program. The report, titled “Food Fight: Small team of state examiners no match for schools that divert student meal funds,” said some of the districts were supplementing their tight budgets by diverting federal and state meal reimbursements, while others were building excess food service cash reserves. The U.S. Department of Agriculture, which runs the National School Lunch Program, stipulates that cash reserves may not exceed three months of operating expenses.

Now the California Department of Education is in the midst of a statewide effort to put dozens of non-compliant districts on spending plans and to train school administrators, business officers and food service staff about the regulatory requirements. The department said the scope of the misuse of cafeteria funds is unknown.

“There’s been a hue and cry nationwide: ‘We don’t have enough money,’” said Sandip Kaur, director of the Nutrition Services Division of the California Department of Education. “But other states have not done the financial analysis we have done in this state.”

“We are on the road to recovery,” said Christine Kavooras, a manager of the School Nutrition Programs Administration of the California Department of Education. In the 2013-14 school year, the department established the Cafeteria Fund Training Committee, which has launched a four-part training webinar, presented information at state conferences for food service directors and school business officers, hosted regional trainings and issued detailed management bulletins on food service accounting procedures and allowable expenses.

The food service spending plans, and the additional financial scrutiny, come as some districts across the state and the nation say they are struggling with the cost of meeting the new federal healthy school lunch standards. The nutrition standards, introduced in 2012, require that school lunches include more fruits and vegetables, whole grains and low-fat foods.

“There’s been a hue and cry nationwide: ‘We don’t have enough money,’” said Sandip Kaur, director of the Nutrition Services Division of the California Department of Education. “But other states have not done the financial analysis we have done in this state. What they need to look at is how much money they already have.”

The largest misuse of funds named in the Senate Office of Oversight report was in the Los Angeles Unified School District, which in 2012 repaid its food service department $158 million for expenses from 2004 through 2010 deemed unallowable by auditors. Those expenses included salaries for employees in the human resources, financial management, communications, environmental health and information technology departments who did no work related to food services, according to an audit report from the district’s Office of the Inspector General.

“The districts with excess funds saw this pot of money and they tapped into it,” said David Jang, an auditor with the Nutrition Services Division of the state Department of Education.

The Senate Oversight’s “Food Fight” report prompted the California Department of Education to review 31 districts last year. It issued to the state Legislature its own report, which found that 18 of the 31 districts reviewed were out of compliance in how they spent and accounted for their cafeteria funds. The California State Auditor also responded to the “Food Fight” report and issued a report in February about its audit of an additional 18 districts. The State Auditor’s report found that most of the 18 districts spent their cafeteria fund on expenses that were allowed but half of the districts had excess food service cash reserves.

The Senate Oversight report noted that the small team of examiners from the California Department of Education could not keep up with the task of monitoring districts and agencies that serve food. In many cases, the field examiners were nutritionists who focused on the nutritional quality of school meals rather than on the financial health of the food service department.

After a review of 330 school districts in 2013-14, the state education department ordered 45 food service departments to create spending plans to use all of the meal programs’ available funding. An additional 23 districts have been put on spending plans so far this school year, the department said.

The U.S. Department of Agriculture distributes more than $2 billion a year to California to reimburse school food service departments for meals served to eligible low-income students, including the National School Lunch Program, breakfast and after-school and snack programs, as well as for bulk commodities used by cafeteria staff in preparing meals, according to the state Senate Oversight report. California contributes about $145 million a year to the meal programs, the report said.

The California Department of Education oversees the free and reduced-price meals program for the federal government and as of July 1, 2013, is required to review district food service operations every three years, instead of every five years. In another federal regulation change, the review now must include the district superintendent and chief business officer, as well as the food service director.

After the reviews, some food service departments have found themselves with a sudden infusion of millions of dollars.

The Santa Ana Unified School District’s food service department was ordered to spend $13 million in excess cash reserves and misallocated funds from 2008-11, according to a 2014 report from the Fiscal Crisis and Management Assistance Team, a state agency that assists districts. The district’s shopping list includes 900 pieces of equipment, from warming trays to milk coolers, said Tony Wold, executive director of business operations for the district. The department has hired two additional registered dietitians, an accounting manager and other staff, has introduced salad bars at four high schools and is spending more to buy produce, including fresh strawberries.

Stockton Unified’s food services department has spent $6 million on walk-in freezers, ovens, kitchen flooring and other equipment, said Yvonne Migliori, director of Child Nutrition Food Services for the district, which has been on three different spending plans totaling $9 million in the last four years and has struggled to spend all the money it is required to spend. The food service department is planning to buy 96 mobile carts to serve breakfast to students on the go, including offering breakfast near where school buses arrive at school.

At Escondido Union, the food service department has bought walk-in refrigerators and freezers, upgraded computers and purchased a new computerized point-of-sale system as part of its plan to spend down $4.4 million in excess cash reserves in three years, starting this year, said Gail Gousha, director of nutrition services for the district.

In the Anaheim Union High School District, the food service department is on a plan to spend $3.7 million in excess reserves over three years. The district is looking to buy food delivery vehicles, ovens, refrigerators and freezers, said Terry Pangborn-Gerner, director of nutrition services for the district.

The financial reviews and the spending plans are a win for school lunches, which is the intent of the new school meal standards, said Kaur at the California Department of Education. “The goal was to improve meal quality and that’s what happening,” Kaur said.