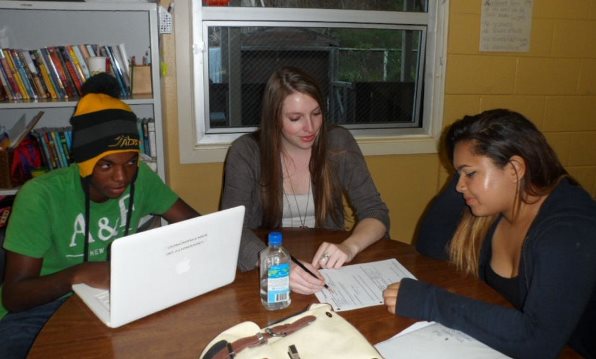 Located on the bottom floor of a housing project in one of the wealthiest counties in the country, a small after-school program is helping low-income students flourish.

Without activities, such as sports or the arts, that typically attract students to after-school programs, Bridge the Gap College Prep draws them in by offering one-on-one academic and emotional support. The program, which operates out of the Golden Gate Village housing project, serves about 130 primarily low-income students, close to 40 percent of the students who attend public schools in Marin City, an unincorporated city of 4,000 in Marin County.

A recent issue brief by the Afterschool Alliance, an advocacy group based in Washington, D.C., noted that the program supports the Common Core State Standards, the new math and reading standards most states have adopted.

The 4th-graders at Bridge the Gap have been focusing on the Common Core approach to learning fractions. Teachers ask students to illustrate what they are doing and explain their answers in writing, according to teacher Liz Bamberg.

She added that the students are also writing about big social topics, such as a recent article in Time Magazine for kids that asked, “Are you cheating?” They are writing more and are “lapping it up,” she said.

Fourth-grader Jeremiah (Bridge the Gap wouldn’t allow the use of students’ last names), a slim boy dressed neatly in a black sweatshirt and beige pants, said he was drawn to the program because of “all the books and learning equipment.” He figured the program would support his love of writing. He was right.

“I was a terrible writer, sloppy,” he said. “They said to take your time, don’t rush. Now sometimes I read it over and say that’s not good enough, and I make it better.” Jeremiah says he keeps a journal that has 100 pages filled with stories about “random topics.”

“I wrote a story about a pair of glasses meeting a face,” he said.

Building an academic vocabulary is a key component of the program. A recent lesson called, “Said is Dead,” challenged the students to replace “said” with more descriptive verbs. In one story, a 5th-grader wrote, “Nancy complained, I gasped, I panted” and “the class screamed.”

The lessons have been so successful that their school teacher thought adults were writing the kids’ papers for them, said Denni Brusseau, executive director of the program. “She didn’t know where these words were coming from,” she said.

Fifth-grader Jade, her black hair pulled back in a ponytail and wearing a green and beige school uniform, credits the program with giving her confidence and improving her grades. “Here they make me feel like I am able to do the work,” she said. “Now I’m getting some A’s.”

Bridge the Gap tracks its students, and program officials say students have improved academically and socially, particularly in writing and behavior toward others. Of the 13 seniors served by the program in the past four years, all have graduated and gone on to college.

“They know there’s accountability at Bridge the Gap and at home,” she said.

A key to the program’s success is the strong relationships staff members build with students and their families. Brusseau greets each student who enters the center, even if it means interrupting a conversation with an adult. The ratio of teachers to students is about 1 to 8, with one or more volunteers in each classroom to tutor students in small groups or one-on-one.

Teachers and other staff from Bridge the Gap attend open houses at the students’ schools and will meet with school staff if students are having problems.

When a student is having trouble, “often the families don’t feel as comfortable with school personnel,” Seekins said. “They prefer to talk to Denni (Brusseau) or their child’s after-school teacher.”

Seekins said one student’s father died in January and he “just couldn’t be in class.” Bridge the Gap set up an independent study for the student on a topic he was interested in – the history of popular music. “He completed the assignment before spring break and was able to transition into the regular classroom,” Seekins said.

Students see their after-school teachers as people they can confide in.

“This place has helped me a lot,” said Katelin, a high school freshman who has long blond hair and carries a purple phone with a monkey on the back. “Just knowing that people really care about me and my education, knowing that I am able to get help has made a difference,” she said. “Without it, I’m pretty sure I would be lost.”

She considers her science teacher, Sarah Rizzo, who also grew up in a low-income neighborhood, her friend.

Alvin Gilmore, the program’s educational director, said staff members are often chosen based on their ability to be role models.

Isaias Franco, who teaches English language arts to high school students in the program, grew up with a single mother and was the first in his family to graduate from college.

“In high school, I had behavior problems,” he said. “I share my stories with the students, and we talk about how they would handle the situation.”

“We talk about just because you’re angry now, that doesn’t determine your life, about how you can come from a family without resources and be successful,” Franco said.

Rizzo, Franco and the other high school teachers eat dinner with their students. Each teacher also spends 10 minutes alone with a small group of students each day.

“In the smaller groups, they know it’s a safe place to talk about things that are bothering them,” Rizzo said. “One student’s brother was shot. A gang is trying to get another student to join. Some don’t have health care. For many, this is the only place they can get dinner. A child shouldn’t have to worry about that.”

Bridge the Gap began in 1995 as “Little Readers,” an ongoing program in a local church that matches a tutor/mentor with a child in grades 1 through 3. Now with a budget of about $880,000 a year, Bridge the Gap has expanded to include a program for grades 4 through 8 from 3:30 to 5:30 p.m. and a high school program from 4 to 8 p.m., both located in the housing project. The center provides a substantial afternoon snack (on one recent day, the snack was vegetarian chili, corn bread and salad) and dinner for the high school students.

Bridge the Gap is predominantly supported by wealthy individuals, Brusseau said, though the center does get some grants from foundations. The funds pay for the teachers, three directors, an administrative assistant and a manager for about 130 volunteers.

The move to the housing project in January 2012 was “a game changer for us,” Brusseau said. “It’s accessible, the rent is reasonable, and we have twice the space we used to have.”

Simply furnished with warm cinnamon and yellow cement walls and a gray linoleum floor, the center is in a two-story, motel-like building built in the 1960s. Apartments are on the second floor, and a playground and grassy area with shade trees is in the front. Newer four-story brick apartments for low-income families are scattered below hills covered with conifers and eucalyptus trees.

Students are starting to make the center their own by painting murals on the walls. The young artists each fill in the outline of a human figure and also include a favorite quotation. The figure by “Yahemmi Stay Chill <3” is black with brightly colored globes that look like planets in the night sky. Part of the torso is painted white as a backdrop for the quotation: “If people are trying to bring you down, it only means you are above them.”