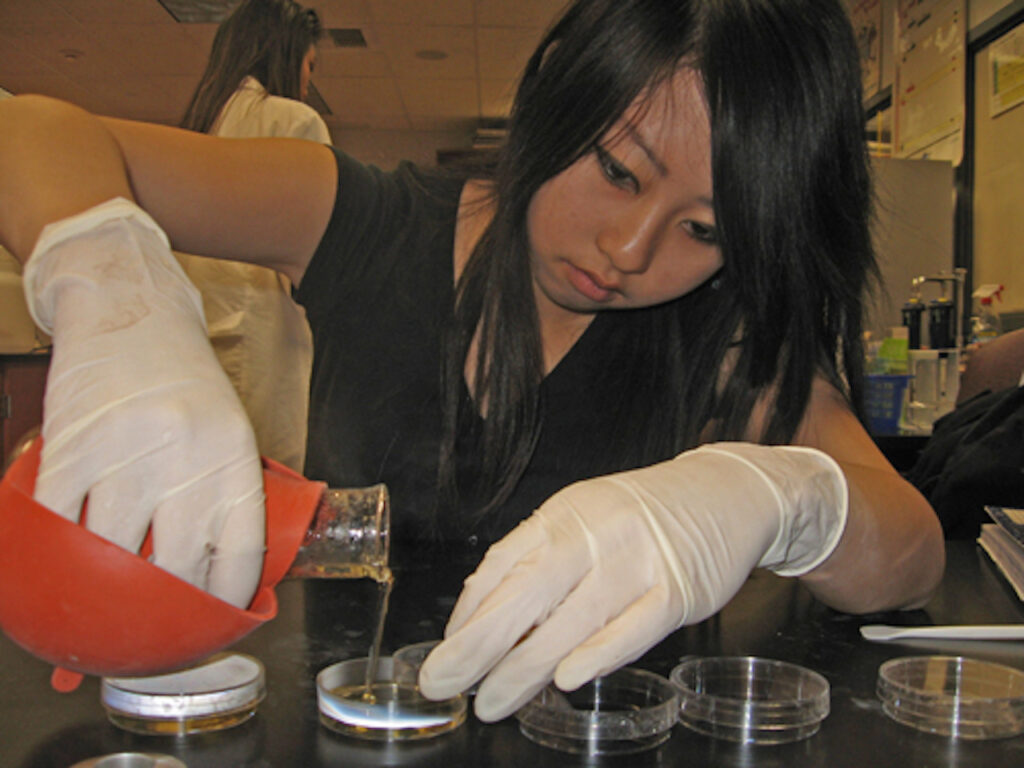 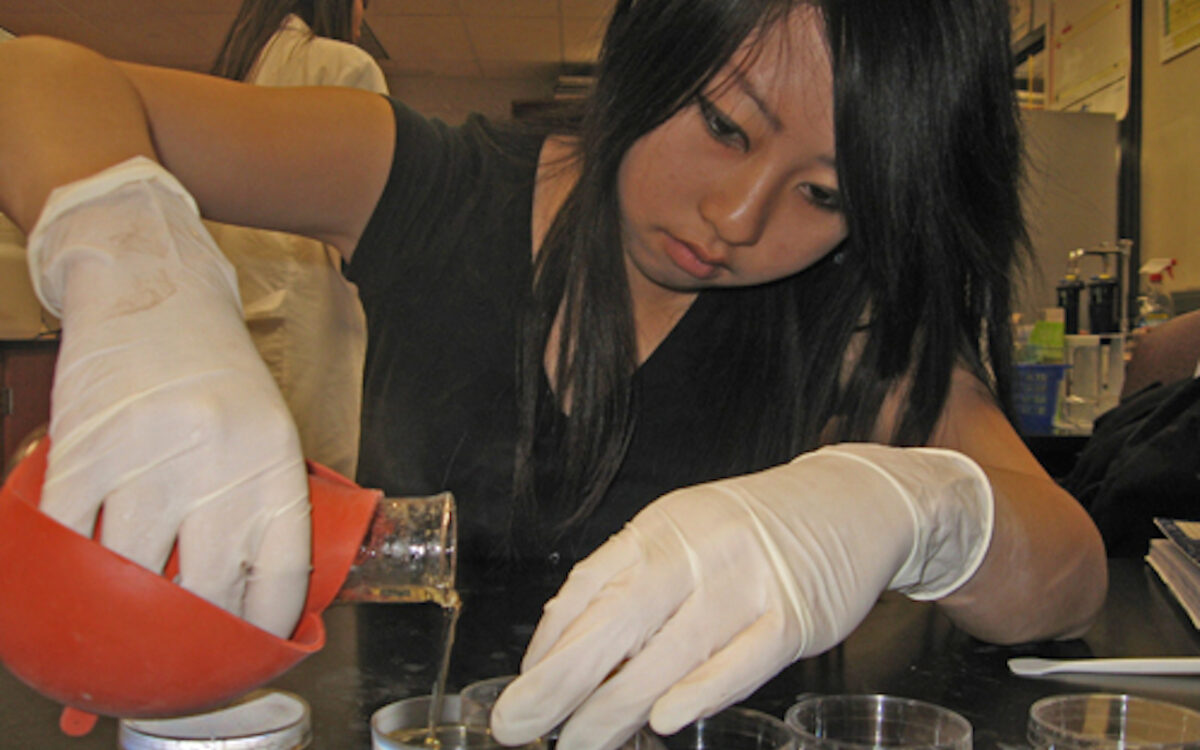 No bells ring at this high school, and you won’t find monitors roaming the halls or restless students asking fitfully for permission to use the restroom.

But you might find biotechnology students cloning carrots in the lab, or see public policy students researching ballot propositions in preparation for a community-wide town hall forum they’re organizing, or watch a group of budding computer scientists hunched over a computer monitor, creating a video game they’ve designed from scratch.

“We think we are a special place,” said Rick Watson, chief executive officer at the Center for Advanced Research and Technology.

The center is a public high school program located in the Central Valley city of Clovis, where about 1,400 students a year participate in half-day career-based courses featuring cutting-edge technology and equipment.

CART is more high-tech campus than high school campus, and it’s become a state model for how to deliver project-based, linked learning education. The model blends academics into a career-themed curriculum, providing students with real-world work experience and a complement of college-preparatory courses.

“CART is definitely not a secret,” said Hilary McLean, deputy director of the Sacramento-based Linked Learning Alliance. “It was one of the early adopters of the linked learning approach and we have held it up as a great example of really great implementation.”

What makes CART noteworthy isn’t only its approach, but also its composition. The program is a partnership between two neighboring districts. Juniors and seniors from both the Clovis and Fresno unified school districts attend courses at CART, and the teaching staff is comprised equally of teachers from both districts.

“We have 15 different high schools from throughout both districts that feed into us,” Watson said. “We have a lottery process because we have so many applicants.”

As high school reform efforts increasingly focus on better preparing students to succeed in college and careers, CART and programs like it are seeing increased interest from those interested in replicating what it offers.

“We probably have two sets of visitors a week,” Watson said, ticking off researchers and policy analysts among recent campus visitors.

CART programs are organized around four career clusters, in professional sciences, engineering, advanced communications and global economics. Within those sectors, students can select from among 16 career-specific laboratories that interest them, where they have the opportunity to work with professionals in the fields and experiment on equipment they might find in the workplace. The laboratories span a wide range of high-tech and high-demand fields, such as robotics, forensic research, psychology, graphic design, biotechnology and biomedicine, among others.

All the laboratories include an integrated English component that directly connects with the career theme students are studying. In a genetics class, students read “Frankenstein,” for instance.

The program is open to juniors and seniors from participating districts, and students spend half their day at CART – participating in either a morning session from 7:30 to 10:30 or an afternoon session from 12:30 to 3:30 – and the remainder of the day at their home school. Students who don’t have their own cars are bused to and from their home campuses.

“These are the students I think are largely sort of ignored by the system, where school just failed them,” said Bruce Cuthbertson, an innovation researcher at IngenioMind.

Students from participating districts can apply for CART in their sophomore year; recommended course prerequisites are successful completion of biology, Algebra I and two years of English. To be eligible, students should hold a 2.0 grade point average, although Watson calls that a “soft” requirement that can be altered on a counselor’s recommendation.

“We do believe there are students out there that can benefit from the experience here at CART,” he said.

Some students who don’t fit in at comprehensive high schools find a home at CART, where they can pick laboratories that appeal to their interests and work on real-world problems, Watson said.

The school’s model has caught the attention of IngenioMind, a California-based research collaborative focused on creative thinking and innovation. Researchers at IngenioMind are studying CART, intending to make it a case study on education innovation.

“I think this school probably doesn’t cater to the 4.0 student at the highest level,” said Bruce Cuthbertson, an innovation researcher at IngenioMind. “It’s the more middle-of-the-pack students. These are the students I think are largely sort of ignored by the system, where school just failed them. The education system in general sort of succeeds for about 10 percent of the people and fails for the rest of the 90 percent.”

CART opened in fall 2000, when the superintendents of Fresno and Clovis Unified were looking for an innovative educational reform model that would meet both district needs and the needs of area business, Watson said. Founders built on the idea that students learn better when they see their education is relevant to the world around them.

The center opened in an old pump factory in Clovis that has been extensively renovated. The result is an airy, 75,000-square-foot facility that looks more like a high-tech company than a school, where large windows offer a glimpse into classes where students work on the latest laboratory equipment, or practice oral presentations in a theater-type setting with professional-grade audio-visual equipment.

“Our motto is that the projects we design can be picked up and taken out into the real world and actually be done,” Watson said. “We have an expectation that the technology the kids are learning is the most relevant and up-to-date technology for today’s workplace.”

Students are treated as they would be in the workplace, he said. Some lab courses require students to wear office attire – hoodies and baggy jeans won’t cut it – and bells don’t ring to prod students from class to class. No one raises their hand to ask permission to use the restroom, and students are expected to keep track of their own projects and time. Small-group work is a major component of the labs, which students say helps their communication and leadership skills.

“They’re treated like adults,” said Karin Mann, president of Concierge Wealth Management Services Inc. in Clovis and a business partner in the school’s finance, economics and marketing labs. “They love the fact that they have to think for themselves. They’re not hand-fed the answer.”

Mann lectures in classes several times a semester and provided input into lesson plans teaching students how to start a stock market portfolio, design a business plan and obtain a starter bank loan. She also hires students as interns in her business.

Students said the program is exposing them to experiences they’d never have in their home schools, and they appreciate the freedom and rewards they receive from studying at CART.

“They (connect) everything you’re learning to the real world,” said 17-year-old senior Haley Vertson. “It really allows me to work to my full potential.”

Vertson, whose home school is Clovis East High School, said she became intrigued by CART after learning she could study forensic research. “The television show ‘Bones’ is my favorite,” she said. And she quickly became hooked on biotechnology through experiments that helped her learn how to identify DNA evidence, reconstruct crime scenes and study genetics.

She and a group of fellow students are currently working on a bioprospecting project, trying to find natural antibiotics in everyday foodstuffs, such as honey, basil, turmeric, garlic and rosemary.

Vertson and classmate Jordan Jensen, 18, a senior at Clovis High School, serve as student ambassadors at CART, where they take some of the campus’ frequent visitors on tours.

A Model for Success, 2011 study on CART college-going rates

Beyond High School, 2014 report by the Alliance for Excellent Education

Jensen said he looks forward to coming to CART each day. He’s worked on experiments cloning carrots in the laboratory and even dabbled in drug testing, testing samples of other students’ urine for tetrahydrocannabinol, or THC, the mind-altering ingredient of marijuana.

“They really take the blinders off here,” he said.

Jensen said he appreciates the depth of what they’re studying at CART. In chemistry, for instance, the work is challenging, but teachers help students understand concepts, and working in groups with other students helps them work out problems and find answers.

“In math class at (my home school) school, you just kind of check out,” Jensen said. “But here, they don’t let you do that.”

Aside from academics, CART is helping students develop an intangible set of skills that will help them in the future, Watson and Cuthbertson said.

“It teaches kids those soft skills we need in the workplace,” Cuthbertson said. “How to get along with other people, how to work in a team. Those are skills that high schools in general just don’t do a great job of teaching.”

For Jensen, who intends to enroll in Clovis Community College next year before transferring to a four-year university, the benefits are obvious.

“I know it’s a gift,” said Jensen, who’d like to go into a research field studying viruses and bacteria. “I feel like I’ve learned so much more here.”