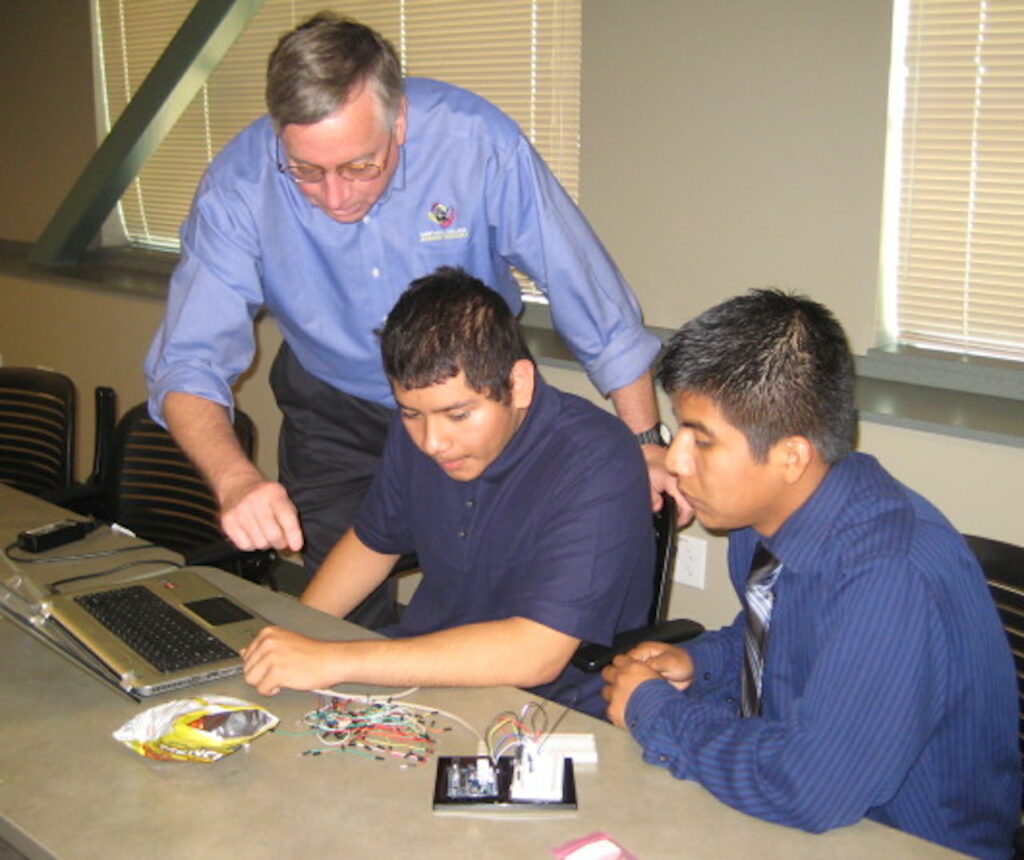 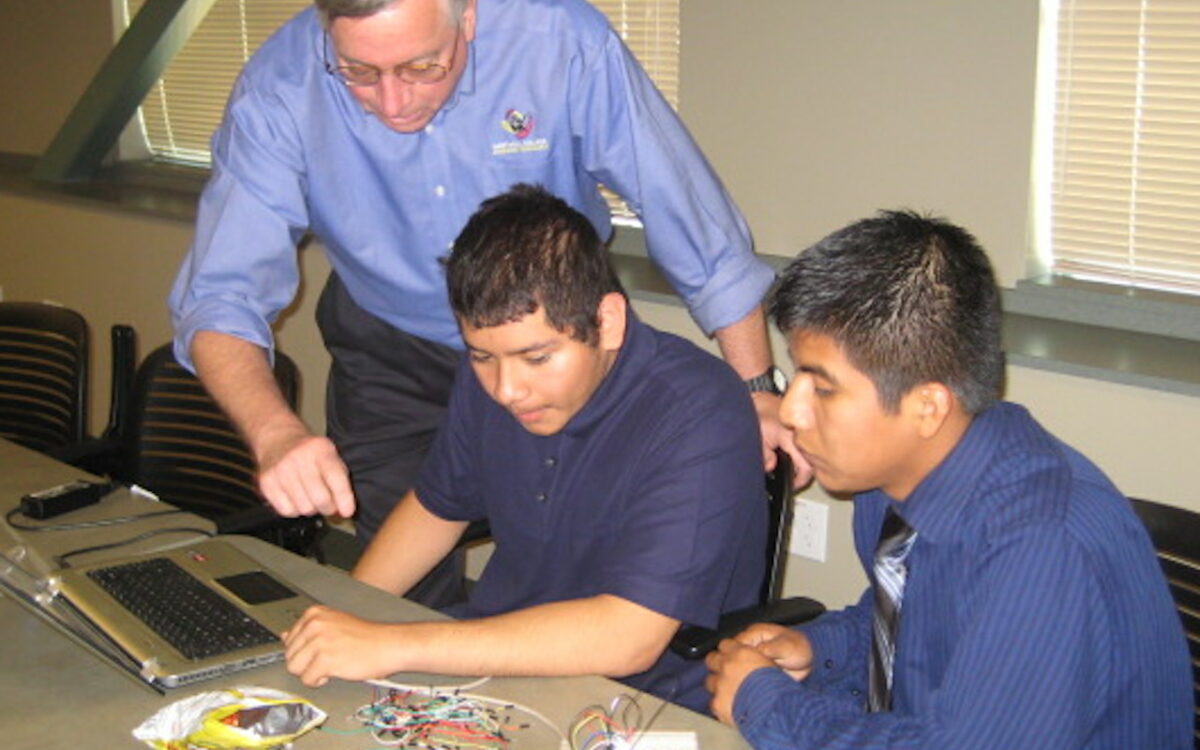 Heads together over a laptop computer, Jose Sanchez Garcia and Benito Sanchez worked to bring a jumble of multicolored wires and a patch of computer hardware to life.

“Look, we did it,” Garcia said as the machinery before him blazed into a series of flashing white lights. With a few clicks on the keyboard and a tweak of the computer program they had just written, they could make the lights blink faster or slower or flash in a different pattern, Garcia explained.

The project earlier this month was the first time either had worked with Arduino open-source software and computer processor boards, which they programmed to control an LED light display.

A year ago, neither Garcia, 18, nor Sanchez, 19, knew much about computer programming, but now both young men are enrolled in an intensive college program that puts them on a fast track to a career in the industry.

Giving back – or maybe just plain giving away – is in Andy Matsui’s nature.

“I think one of the things that truly delights my father is to give away money,” said Teresa Matsui Sanders.

In 2004, Matsui – a Japanese immigrant who parlayed 50 acres in Salinas into a multimillion-dollar flower nursery that revolutionized orchid growing in the United States – started his Matsui Foundation to offer scholarships to deserving students.

“He wanted to use the wealth that he had created from his business to give back to the community that supported his business all these years,” Sanders said.

Over the next eight years, the foundation handed out some $5 million in scholarships – at $40,000 a pop – to high school and community college students in Monterey County.

However, Matsui was disappointed in the low college graduation rate of many of the scholarship winners, Sanders said, and wanted to channel more funds to something that would be more career-oriented.

That desire ultimately led to the creation of CSIT-in-3, a three-year bachelor’s degree program in computer science. The foundation has committed to funding $30,000 scholarships for every CSIT-in-3 participant through 2016, an investment of more than $1 million, said Sanders, who serves as the vice president of the Matsui Foundation and is the chief financial officer of Matsui Nursery.

Matsui’s early business focused on selling chrysanthemums and other flowers. But when cheaper flowers from Latin America began flooding the market in the 1990s, Bronson wrote, Matsui, then 63, took a drastic step to save his business: he began growing orchids, previously available only through import, and sold them in pots. Matsui Nursery is now the largest producer of potted orchids in the world, according to the nursery website.

As his company thrived, Matsui wanted to do something to help others, especially the farm workers who helped his nursery grow, Bronson wrote. The Matsui Foundation soon followed.

Matsui, 79, can still be found at the nursery seven days a week, Sanders said. One of his happiest moments, she said, was the day not too long ago when the nursery handed profit-sharing checks to employees.

“We consider this to be college done right,” said Joe Welch, a computer science instructor at Hartnell College and co-director of the Computer Science and Information Technology Bachelor’s Degree in 3 Years program, or CSIT-in-3.

Garcia and Sanchez are among the second group of students to begin the program, launched last year with funding from Salinas Valley orchid grower Andy Matsui. The grower’s Matsui Foundation gives $30,000 scholarships to participants in CSIT-in-3, and will continue to offer scholarships to each incoming class through 2016.

The Matsui scholarship is more than enough to cover tuition, estimated to be about $12,000, over the course of the three-year program. The size of the scholarship ensures that students who qualify won’t have to work and can keep up with the rigors of the studies. To fit the degree program into three years, Welch and co-director Sathya Narayanan built a curriculum that requires students to attend school year-round – classes are mandatory in the summer and winter breaks, in addition to courses during the traditional school year.

Students move through the program together, taking all the same classes and working at the same pace. The rigor ensures that students receive all the general education courses required for their degree, while also keeping them on track to graduate in three years.

Classes are offered at Hartnell for the first half of the program, then students move over to Cal State Monterey Bay to finish the program.

Welch and Narayanan speak passionately about CSIT-in-3, which opens doors to students who otherwise might never consider careers in tech.

But they also see CSIT-in-3 as an incubator for addressing the lack of diversity plaguing the technology industry. All 60 students in CSIT-in-3 are low-income and 82 percent of them are the first in their families to attend college. The students are overwhelmingly Latino (90 percent) and 43 percent are women – both groups whose numbers lag in tech jobs.

CSIT-in-3 enrollment reflects the demographics of the Salinas Valley, where agriculture is the region’s primary industry and many of the students are the children of farm workers.

The students are vetted and provisionally admitted to the program after an hour-long interview. Most are required to take an intensive math remediation course on weekends to get their skills up to par before they’re fully accepted into the program. Students who don’t show the dedication required to complete the three-year program are dropped.

Lopez, who carries a 4.0 GPA, was accepted into University of California, Santa Cruz, but ultimately chose CSIT-in-3 for its accelerated curriculum and financial support. He aims to secure a job at a Silicon Valley tech firm when he graduates, and in the meantime is honing his skills at area hack-a-thons.

At a recent hack-a-thon, Lopez and two of his fellow CSIT-in-3 students built an Android app for Salinas-area substance abuse treatment center Sun Street Centers. The app features information on drugs and alcohol, a news feed, and a blood-alcohol level calculator.

For Sanchez, the program offered an opportunity he never expected while growing up in nearby Greenfield.

“I didn’t think about going to college,” he said. “But then I heard about this program and all the opportunities it can offer me. This program has helped a lot. And most people in here are just like me.”

Welch and Narayanan, the director of the computer science and information technology bachelor’s degree program at Cal State Monterey Bay, are working to build relationships with some of Silicon Valley’s top firms, seeking internship opportunities when their students are ready for them next year, as well as employment opportunities when students graduate.

The program “is a way to establish a vitally important pipeline from underrepresented populations to high-speed companies,” said Welch – who is working to convince top companies that his students can stack up against any of their applicants from powerhouse computer science schools such as Stanford University, Carnegie Mellon and others.

“What we want to assert is that we want students who can compete,” Welch said. “Our program is not successful if our students simply graduate. If they graduate and they’re viewed (as top applicants) by leading tech companies, then we’re successful.”