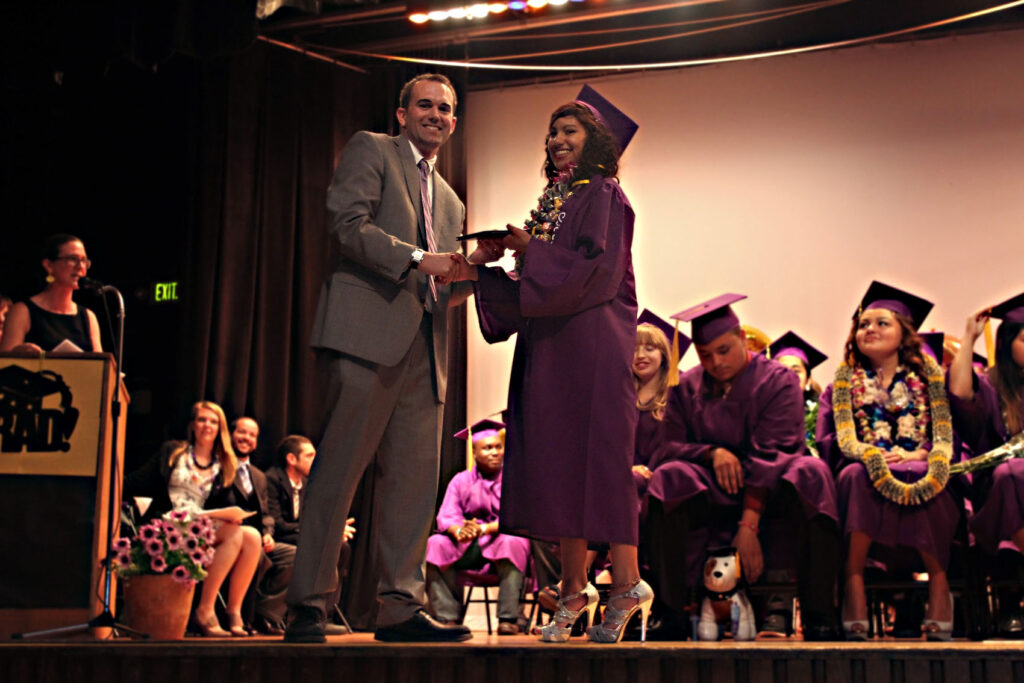 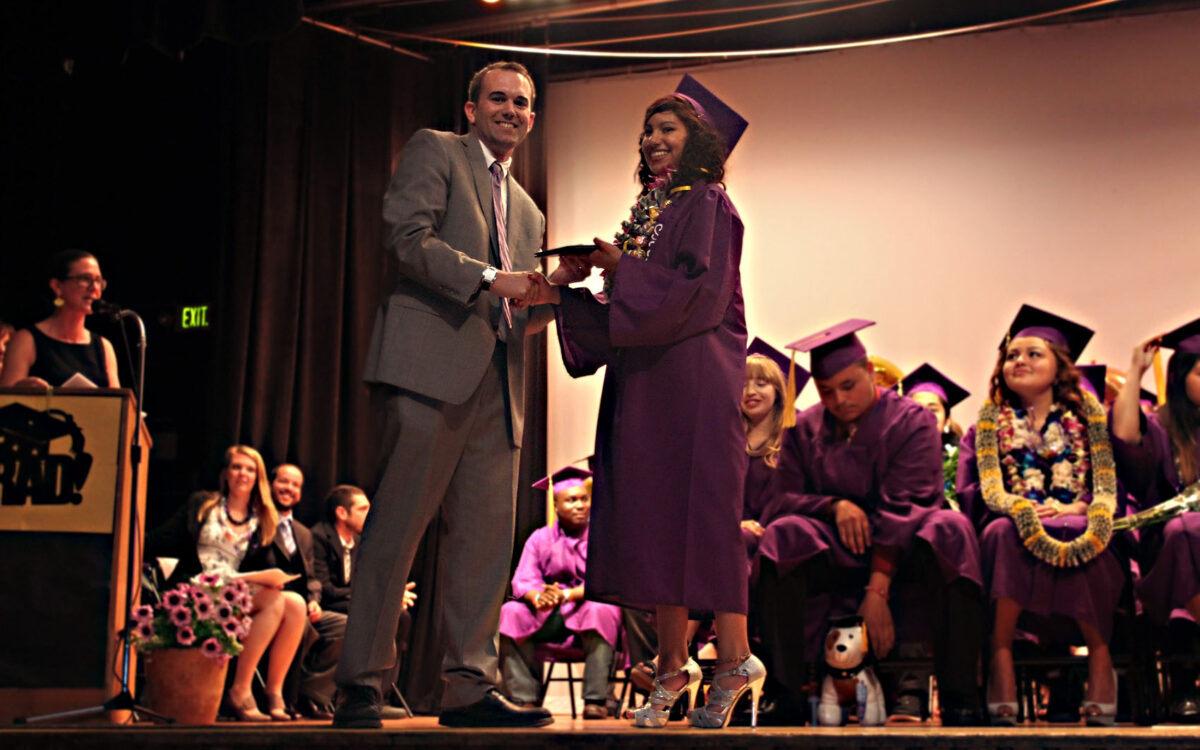 When Destinee Brigham, a senior at City Arts and Technology High School in San Francisco, presented her “College Success Portfolio” in front of a panel of teachers and administrators this past spring, she was participating in a rite of passage every senior must go through to graduate.

In her 90-minute presentation Destinee discussed her analysis of the book “Things Fall Apart” by Chinua Achebe, a research paper on abortion law, and her experience working at a charter elementary school. In the development and presentation of their College Success Portfolios, students like Destinee demonstrate the “deeper learning” skills they’ll need to succeed in college – and beyond.

Deeper learning is an education concept that’s received increasing attention in recent years; it’s woven into the Common Core State Standards and is being implemented in a growing number of schools nationwide. In its simplest terms it means just what the name implies: learning that goes beyond rote memorization and the superficial mastery of facts to promote a deeper level of understanding. More specifically, deeper learning is an umbrella term for a set of skills and knowledge that a growing number of experts argue is critical for success in college and careers in the 21st century. Deeper learning defines not just academic skills, but social and emotional qualities that many educators believe are also essential for education success – including self-awareness, perseverance and the ability to cooperate with others.

At City Arts and Tech, one of three high schools in the Bay Area-based Envision Schools charter network, deeper learning has been integrated into all aspects of the school curriculum.

Signs of deeper learning are everywhere in the school, which is located in in a wing of the June Jordan School for Equity, an alternative public high school in San Francisco’s Excelsior District.

Classroom walls are inscribed with the Envision philosophy: “Know. Do. Reflect.” A poster in the main office defines the word “perseverance” in bold letters: Steadfastness in doing something despite difficulty or delay in achieving success.

“The term ‘leadership skills’ resonates with students,” said Bob Lenz, co-founder of the Envision Schools charter network. “So we were already there when educators began talking about deeper learning. People use different terms but there is general agreement that these are skills that all schools should be helping students develop.”

“The idea of deeper learning grew out of a general sense of disappointment in our education system,” said school principal Daniel Allen. “There was a sense that it’s too narrow, and that it isn’t providing a beautiful and inspiring learning experience for students. Kids are being taught to ‘do school’ – not to develop as engaged learners with a mastery of essential skills.”

“You could go to almost any school and find a teacher who is using deeper learning techniques,” Allen said. “These ideas have been around. But there are not many schools – like City Arts and Tech – where the entire school embodies deeper learning. People are just beginning to realize that this is a movement, and more and more educators are adopting this approach.”

“The term ‘leadership skills’ resonates with students,” Lenz said. “So we were already there when educators began talking about deeper learning. People use different terms but there is general agreement that these are skills that all schools should be helping students develop.”

These skills are evident in City Arts and Tech’s College Success Portfolio defense, when seniors stand before a panel of teachers and peers and analyze some of their best high school work. During their portfolio presentations, students discuss three examples of their work, called “artifacts,” and present a research paper and a multimedia project.

Seniors are expected to demonstrate comprehensive understanding of their material, identify connections between the themes in their work, describe their sources, analyze their own learning process, and then respond to tough questions from the panel. The process is demanding – and it’s the culmination of years of work. In fact, students start to prepare for their college success portfolio from their freshman year and have a practice run at the end of 10th grade, when they must give a more limited “benchmark” defense.

“I can’t believe how far she’s come,” Destinee’s mother marveled, as she watched her daughter carefully check her notes before her presentation began. “She was just a little girl and now look at her up there, doing so well, just about to graduate. “

The concept of deeper learning has been heavily promoted for the past several years by the Menlo Park-based Walter and Flora Hewlett Foundation, which has contributed more than $4 million in grants to the Envision schools since 2010.

Barbara Chow, the foundation’s director of education programs, contrasts classroom strategies “where the student is passive, and the school essentially opens up a student’s head and pours the information in” to those of deeper learning: schools where students take an active role in learning and are deeply engaged with what they learn. “The goal is for the student to not only understand a topic, but to be able to apply it to different situations in school and in other areas of their lives,” Chow said.

Researchers at the Stanford Center for Opportunity Policy in Education (SCOPE) found that in 2011-12 Latino and African-American students at City Arts and Tech completed their course requirements (known as A-G requirements) for California public universities at far higher rates then the statewide average. One hundred percent of African-American students and 82 percent of Latino students completed the A-G requirements – compared to 28 percent and 29 percent respectively statewide.

City Arts and Tech students also persist in their college studies, according to the Stanford research, which showed that 85 percent of college-bound students from the school’s class of 2009 stayed in college for at least four years, for example. Nationally, 65 percent of all students and 47 percent of Hispanic students graduate from college or are still enrolled after six years.

“The College Success Portfolio is wonderful college prep,” said Daniel Allen, principal of City Arts and Technology High School. “Our students get to learn and practice perseverance in a place where they are supported and encouraged. What you don’t want is kids of color, kids whose parents didn’t go to college, to get there and discover that they don’t have the skills to make it. “

Eddy Poot, who graduated in the spring, is going to UC Santa Cruz to study bioengineering. His parents didn’t go to college, while his older siblings attended community college.

“I do feel ready for college,” he says, pointing to skills that he learned at City Arts and Technology, including public speaking – and most importantly its emphasis on critical thinking skills. “It’s important to look beyond the obvious,” he said.

It’s impossible to say how much the school’s emphasis on “deeper learning” has contributed to the higher college-going and success rates of its students. But Allen believes the school’s approach, particularly the College Success Portfolio, gives students the skills and, perhaps as important, the confidence they need to succeed in college.

“The College Success Portfolio is wonderful college prep,” he said. “Our students get to learn and practice perseverance in a place where they are supported and encouraged. What you don’t want is kids of color, kids whose parents didn’t go to college, to get there and discover that they don’t have the skills to make it. “

A close bond between student and teacher is also “an essential element of deeper learning,” Allen said. “If there is anything that sets this school apart it’s the quality of the relationships between teachers and students. This is what keeps students engaged.”

Learning how to learn

Another key dimension is the emphasis on learning how to learn – which means that students are constantly asked to reflect on their own academic process and progress. Throughout their four years at City Arts and Tech, students are taught increasingly rigorous study, research and communication skills, which are reinforced in frequent meetings between students and their academic advisors.

To see a student presenting her College Success Portfolio, check out this video

What is deeper learning? See the Hewlett Foundation’s website for more details and resources

As part of their College Success Portfolio defense, students are required to reflect on what they’ve learned, what they would have done differently and how they’ll apply that experience to future work. During Destinee’s portfolio defense, for example, she identified her own areas of academic growth. Her writing had become stronger, she observed, and she also had made more of an effort to participate in class.

Destinee said that she works hard when she is interested in a particular topic, but struggles when she finds a subject boring. When it came time for questions, City Arts and Tech principal Allen asked her what she planned to do in college when a course or assignment didn’t hold her interest. “I’ll just suck it up,” Destinee responded, with a shrug. Allen pressed her to go deeper. “It’s easy to say you’ll suck it up, but what does that mean, exactly? What will you do when you find yourself in that situation?”

Destinee held his gaze and didn’t answer for a moment. Then she responded with a plan for dealing with what she sees as her biggest challenge: procrastination. When she puts projects off, they become harder to tackle. “I’m going to start assignments as soon as I get them, and not wait for the last minute.”

When Destinee had finished her presentation and answered all the panel’s questions, panel members left the room to confer. In Destinee’s case, the panel had disappointing news. They had many positive things to say about her presentation. They commented on her confidence,  the competence of her defense and her overall growth as a student. But they concluded that she hadn’t demonstrated proficiency in two areas of her defense, and so she hadn’t passed. Destinee listened in silence, and then gathered her things quickly and left for home.

“She was disappointed and angry,” Allen said later. “I couldn’t get her to look at me for a couple of days. It was a learning experience for her: What do you do when your best isn’t good enough? You have to push yourself that much further, and she did; she worked with her advisor and fixed the areas that weren’t working.”

Six days after her initial presentation, Destinee defended her portfolio again, and this time she passed. Next fall, she’ll head off to Santa Monica College, and Allen believes she’s ready – not just because she meets basic academic requirements, but because of the deeper and less tangible skills she learned along the way. “Every school emphasizes grades and test scores and academic requirements, and we do that too,” Allen said. “But we also promote an academic identity. For our students, we hope that school isn’t just what they do, it’s who they are.”

Connie Matthiessen is a freelance writer and editor who lives in San Francisco.