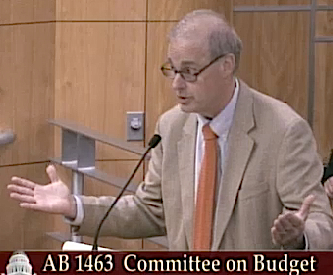 Check out our graphic explainer on the budget.

The Legislature passed a state budget Sunday with a big funding increase for K-12 schools that pleased school district leaders and a last-minute statutory change that angered them.

The $61 billion in fiscal 2014-15 for Proposition 98, the formula setting K-12 and community college revenue, includes $4.75 billion more for implementing the Local Control Funding Formula that will raise per-pupil spending nearly 10 percent, on average.

During a hurried hearing before the Senate Budget and Fiscal Review Committee on Sunday, even the committee chairman, Sen. Mark Leno, D-San Francisco, who led the budget negotiations with the governor’s office, acknowledged, “I can’t tell you why the governor made it (the cap on district reserves) such a high priority; that this is part of our overall agreement on the budget.” He said he would have preferred if the proposal had gone through the normal legislative process, where the potential impact could have been explored. “There’s no way I would have done it this way, but this is where we are now,” Leno said, before he and other committee members approved the language in AB 1463, the trailer bill on K-12 issues, by a 12-3 vote, sending it to the full Legislature for passage.

For years, the Legislature has required that districts keep minimum reserves to stave off fiscal crises. Relaxed during the recession, next year it will be restored to between 1 percent of their budgets for Los Angeles Unified to 5 percent for small districts, with the average being 3 percent. But it has never imposed a maximum reserve, leaving it to each district to determine what’s appropriate. The new maximums, in years in which the cap is activated, would range from 3 to 10 percent of the district budgets, with 6 percent for most districts.

The cap on reserves would be tied to voter passage in November of Gov. Brown’s revised plan for a state rainy day fund, and even then only in years when the state actually puts money into a new reserve for Prop. 98. The rationale for the cap is that in revenue-healthy years, when the state puts aside money into its reserve for education, districts also wouldn’t need to accumulate big reserves of their own, and so should spend down anything above the maximum allowed. Districts that can justify reserves above the maximum will be able to get a waiver from county offices of education under AB 1463, said Todd Jerue, chief operating officer of the California Department of Finance. He testified Sunday that some districts currently have reserves of 30 to 50 percent.

Employee unions, whose support Brown is counting on for his re-election and for passage of the rainy day ballot measure, are the chief advocates of the cap on reserves. Steve Henderson, a lobbyist for the California School Employees Association, testified Sunday that districts tend to follow the state’s lead. If the state puts money in a rainy day fund, districts will add to their reserves, even when not necessary, he said. A representative from the California Teachers Association, which also pushed for the reserve limit, did not testify on Sunday. On Friday, Josephine Lucey, president of the California School Boards Association, accused the teachers association of pushing for the cap so that more money would be freed up for pay raises.

As EdSource has noted previously, it would be at least seven years before the state could begin diverting money into a Prop. 98 reserve, and even then strict preconditions would have to be met to trigger the cap on district reserves. Because the cap would be years away, supporters argued that legislators would have time to fix it. “No harm, no foul,” as Leno put it. But opponents threw back the same argument: If it’s not going to happen for years, “why the rush to enact it now?” asked Andrea Ball, a lobbyist for the California School Boards Association.

Other critics said districts would have to draw down reserves potentially by hundreds of millions, if not billions of dollars, regardless of the amount, however small, the state filled the Prop. 98 reserve. Jennifer Kuhn, deputy legislative analyst with the Legislative Analyst’s Office agreed that the lack of a linkage between the sizes of the state and local reserves is a concern.

Michael Hulsizer, chief deputy for government affairs for the Kern County Superintendent of Schools, said a 6 percent cap would “contradict the best practices of national organizations,” which recommend 15 to 17 percent reserves in order to cover two months of district expenses. “We have learned during the recession that districts’ reserves were  the biggest protection from fiscal insolvency and the need to come to you for loans,” he told senators. “Every education management group has agreed this is bad public policy.”