CSU Chancellor Joseph I. Castro resigns in fallout over his handling of sexual misconduct claims 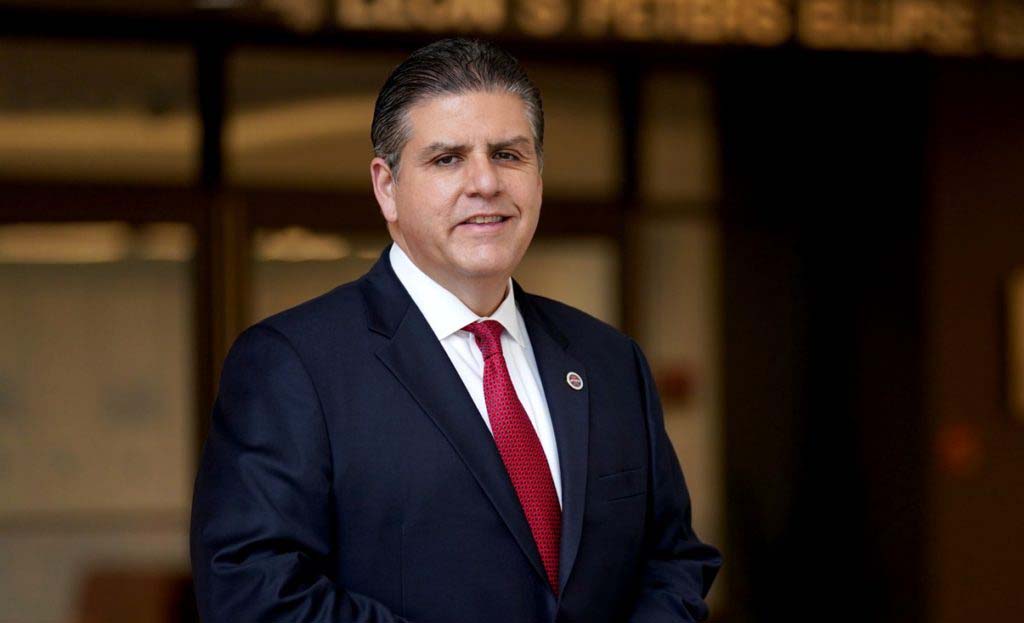 California State University Chancellor Joseph I. Castro resigned late Thursday amid allegations that he mishandled sexual harassment complaints against a university official while he was president of Fresno State.

Castro’s announcement followed a closed daylong meeting of CSU’s board of trustees. Calling the resignation decision “the most difficult of my professional life,” Castro said he was leaving his job as chancellor to preserve the goals of CSU.

“I have been honored to serve the California State University for more than eight years, including as its eighth chancellor, and the decision to resign is the most difficult of my professional life,” Castro said in a statement. “While I disagree with many aspects of recent media reports and the ensuing commentary, it has become clear to me that resigning at this time is necessary so that the CSU can maintain its focus squarely on its educational mission and the impactful work yet to be done.”

Fresno State received “at least a dozen” harassment, bullying and retaliation complaints against Frank Lamas, its vice president of student affairs, during Castro’s time as university president, but Castro repeatedly failed to take disciplinary action, USA Today reported earlier this month. Castro wrote Lamas “glowing performance evaluations and endorsed him for a prestigious lifetime achievement award, which Lamas won,” the newspaper found during a six-month investigation. At least one complaint came from a subordinate.

State Sen. Connie Leyva, D-Chino, chair of the Senate’s education committee, said Friday that while Castro’s resignation is “certainly a step in the right direction,” the board of trustees should still move forward with a “prompt and thorough investigation” into Castro’s actions at Fresno State. Leyva had called for such an investigation when the USA Today story first broke.

“Survivors of the abusive conduct and harassment—as well as the entire CSU community and public at large—deserve to know exactly what happened under Chancellor Castro’s watch at Fresno State. I am hopeful that the Board of Trustees will do the right thing by swiftly moving forward with an independent investigation into the shocking findings of the USA Today report,” Leyva said in a statement.

Leyva added that if the board doesn’t initiate an investigation, she will convene a hearing in the education committee “to examine the extent of inappropriate behavior that endangered the safety and well-being of students and other members of the Fresno State community. ”

The California Faculty Association, the union representing faculty across CSU’s 23 campuses, agrees that an investigation is necessary and said in a statement Friday that it should be carried out by the Legislature. It’s important to find out “what happened at Fresno State, what happened during the former chancellor’s hiring process, and why the CSU continues to hire administrators with little regard for student safety and human dignity,” the union said in its statement.

“Only a public, open, and independent investigation by the state legislature can produce impartial results, which can lead to the systemic changes we need to see.  It is also the only way to restore the public trust in the leadership of the CSU,” the union added.

He said he “chose to retire from Fresno State December 31, 2020. I received an outstanding letter of reference from my supervisor then President Joseph Castro and positive evaluations every year I was at the university.”

“To end by giving him a large settlement and a favorable reference to work somewhere else sends a message to the victims of the harassment that they’re more interested in protecting him, especially given how long the harassing behavior had been going on,” Shiwali Patel, senior counsel for the National Women’s Law Center, told the Chronicle of Higher Education.

The Chronicle of Higher Education obtained a 43-page report dated April 7, 2020, on a CSU investigation of one complaint made by a subordinate of Lamas in which the victim said Lamas touched her repeatedly, made comments about her body and made comments of a sexual nature.

The woman told a CSU investigator that she “left a job I loved and was good at” because of Lamas’ conduct.

A “preponderance of the evidence” against Lamas showed he “engaged in inappropriate behavior” that included “adjusting her bra strap,” and attempting to “meet (her) behind closed doors and closed blinds.”

Lamas made “repeated denials he engaged in any such conduct,” the report states.

“We appreciate Chancellor Castro’s cooperation with the Trustees and his decision to step down for the benefit of California State University system,” CSU board of trustees Chair Lillian Kimbell said in a statement.

The resignation was welcome news to Cathy Sandeen, president of Cal State East Bay. “I am extremely grateful that the CSU Board of Trustees has taken a strong and decisive stand against gender-based harassment, misconduct and retaliation through their action yesterday. As a woman president, a first-generation college grad, and a double CSU alum, I thank them for restoring my faith in our system,” she said in a statement.

Before the board meeting, faculty and staff from Fresno State and Cal State Long Beach spoke out against Castro and called for his resignation.

The statements against Castro came as the CSU board of trustees met behind closed doors to consider calls by legislators for an independent investigation into Castro’s handling of allegations against Lamas.

While Castro on Feb. 4 said that he welcomed an independent investigation, there were increasing calls for him to resign or be removed from office.

The academic senate of Fresno State drafted a vote of no confidence in Castro, according to the Fresno Bee. It asked for Castro to be put on leave without pay while an independent investigation was conducted into his actions. It called for him to be fired if the investigation corroborated reporting from USA Today or additional evidence, such as whether Castro hid his actions from the search firm in his bid for chancellor.

Over 200 faculty and staff members at Cal State Long Beach signed a petition calling on Castro to resign. The petition said there is no question of what happened, and there is no need for an investigation.

“We already know those facts. We already know what Castro did. We already know that he admitted that he reacted how he did, which was not to react and basically reward this individual,” Cal State Long Beach professor Emily Berquist Soule told the Los Angeles Times. “To us, that’s all the facts we need. We don’t have confidence that he would protect ourselves or our students from violence and sexual discrimination.”