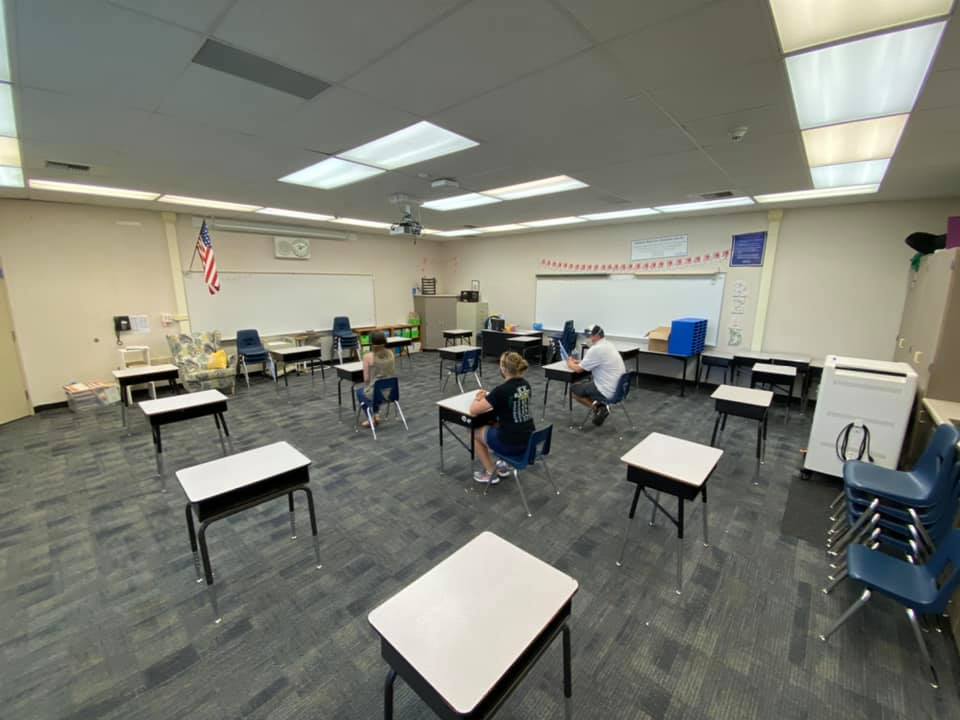 Surging Covid-19 cases pushed three more California counties into the most restrictive tier on the state’s tracking system Tuesday, causing some school districts to put their plans to reopen on pause.

Sacramento, San Diego and Stanislaus counties moved from “red” status, or Tier 2, to “purple” status, or Tier 1, after Covid-19 cases in the counties increased over two weeks. Schools ready offering in-person instruction in those counties can continue to do so, but they must increase Covid-19 testing for staff, according to state guidance.   But moving to purple can keep schools closed that are currently teaching children remotely, at least until the rate of infections decrease.

Two large districts — Natomas Unified and Elk Grove Unified — had more tentative plans to reopen if Covid-19 infection rates went down. Elk Grove Unified, the fifth largest district in the state, had announced it would reopen campuses for pre-K to third grades student on Nov. 17, but only if the county was in the Tier 3, or orange status.  Being in Tier 3 means that there is moderate spread of the virus in the county. Natomas Unified officials also wanted to reopen some of their schools in November, but only if infection rates dropped.

As a result of state guidelines announced by Gov. Gavin Newsom earlier this summer, districts can still reopen elementary schools for in-person instruction if they receive waivers from the county department of health, said Sacramento County Superintendent Dave Gordon. Waivers only cover K-6 students, even in California schools that include other grades, according to the California Department of Health.

“Districts all have paid very close attention and worked with public health officials,” Gordon said. “We have a good relationship with Sacramento Public Health. My guess is they would meet the criteria that public health has set forward.”

However, so far mostly private schools have been granted waivers to reopen in Sacramento County.

Two of the county’s school districts reopened their campuses this week — just the day before Sacramento County moved into the more restrictive “purple” status, and thus are allowed to stay open.  Arcohe Union Elementary School District, a one-school K-8 district of 457 students; and Folsom Cordova Unified School District, which has 20,605 students, both opened Monday.

Folsom Cordova Unified elementary school students will actually only return to classes on Thursday this week (Nov. 11), but the schools were open for a teacher workday on Tuesday, which under state regulations means the district is regarded as already being opened, Gordon said.

The schools reopened just in time, said Angela Griffith Ankhelyi, director of communications for the district. “We couldn’t have predicted what the county or environment would do. We were simply moving forward with our plans.”

Beginning Thursday the district will have 4,900 elementary students back on campuses two days a week.  They’lll study via distance learning for another two days.

The announcement Tuesday that San Diego County was once again in “purple” status affected only a few schools, as most school campuses had already reopened, at least for some students.  One notable exception is San Diego Unified, with over 100,000 students by far the county’s largest, which remains firmly in a distance learning mode.

But two school districts in San Diego County that had planned on reopening for in-person instruction this month will no longer be able to: La Mesa-Spring Valley Unified and Fallbrook Union High.

La Mesa-Spring Valley Unified, which serves around 12,000 students, was planning on beginning to offer in-person instruction to most of its students Nov. 30, said Superintendent David Feliciano. But given San Diego County’s status change, that plan has been pushed back to around January, he said.

Even schools in “purple” counties that are allowed to remain open are required to close when at least 5% of staff and students test positive for Covid-19 within a 14-day period.   The entire school district must close if one-quarter of schools in the districts are closed due to Covid-19 cases. Schools can usually reopen within 14 days after campuses have been thoroughly cleaned and disinfected, public health contact tracing is completed and the county public health department has given its approval.

Several other counties moved to more restrictive tiers Tuesday.  But unlike the three counties that are now classified as “purple,” the change does not affect school opening or closings, but rather regulations regarding commercial activities in the county.  Amador, Contra Costa, El Dorado, Placer and Santa Cruz counties moved from the orange, or “moderate” tier back to the red tier. Modoc, Siskiyou and Trinity counties moved from the yellow, or “minimal” tier to orange.