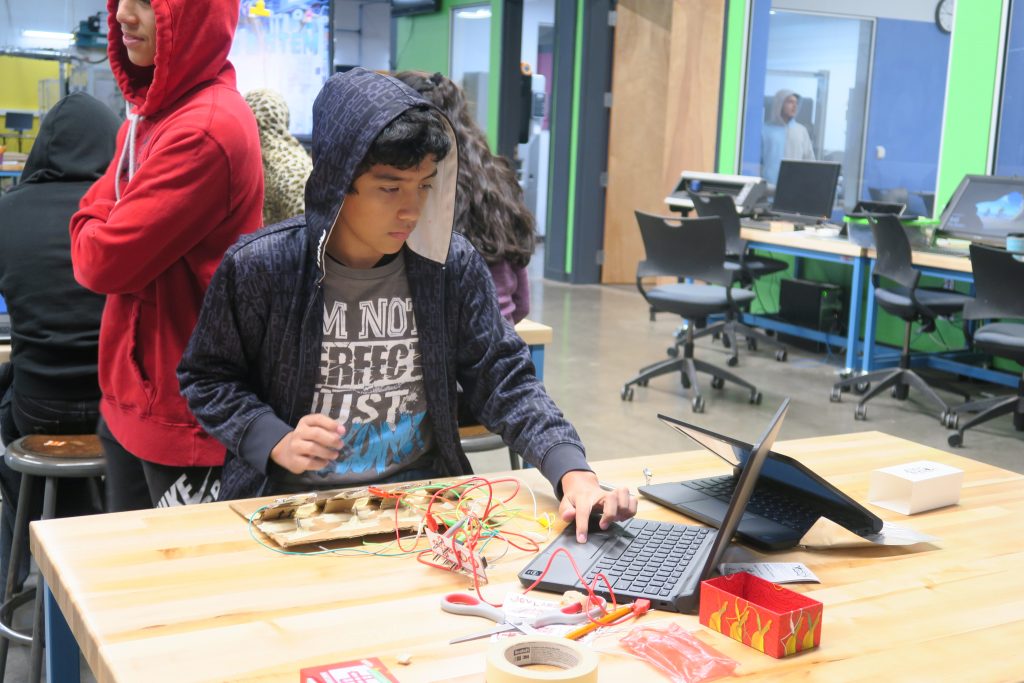 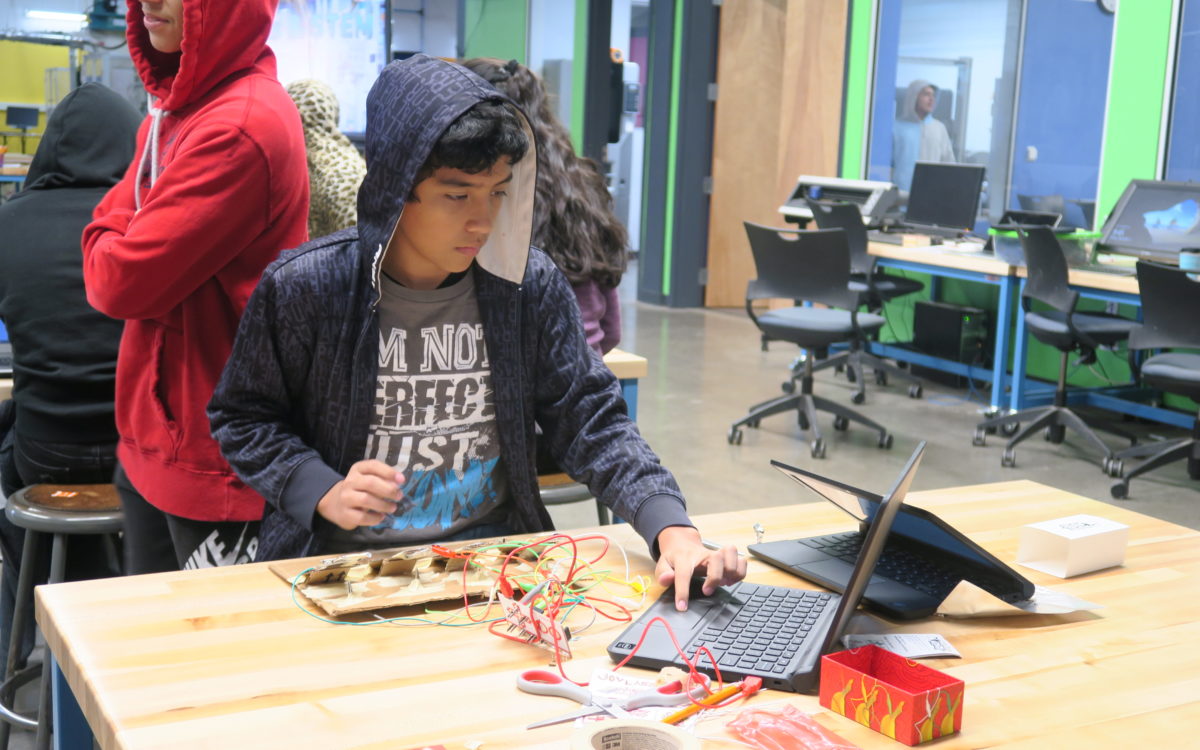 In an effort to bring the latest innovations in science education to students in some of the most remote parts of California, some county offices of education are investing in engineering labs, science camps, mobile classrooms and other initiatives to help rural students compete with their urban counterparts.

California’s 58 county offices of education, almost all headed by elected superintendents, provide a range of services to the districts in their counties, including support for districts where students are lagging academically.

Kirk Brown, director of science, math, engineering and technology at the San Joaquin County Office of Education in Stockton, said Central Valley students don’t have the same opportunities as those in places like the Bay Area, such as trips to science museums or tours of tech companies. “We want to make sure our kids — especially the needy ones — have opportunities to engage in the latest science innovations,” he said.

Statewide, students in small towns and rural areas scored significantly lower than their suburban and urban peers on the most recent standardized science test taken by students in certain grades. In 2015, the California Standards Test in science was administered for the last time as the state began developing a new test aligned with new standards, known as the Next Generation Science Standards. On that test, 58 percent of urban and suburban 5th-, 8th- and 10th-graders scored at or above the proficient level, while only 51 percent of students in small towns and rural areas did.

Students in small towns performed the lowest of any group, with only 48 percent scoring at or above proficient. The U.S. Census defines small towns as having populations between 2,500 and 50,000 and not within a large metropolitan area. The statewide average for all groups was 57 percent.

The San Joaquin County Office of Education in March unveiled a $1 million fabrication laboratory, or fab lab, a shop classroom in Stockton where students from throughout the county can experiment with laser cutters, 3-D printers, design software, robots and other modern technology.

The 7,000-square-foot facility, in a refurbished storage warehouse, also includes a small arena for robotics competitions, more than 100 computers, large tables where students can work collaboratively, rolling computers and virtual reality stations. The lab is available for teacher training as well as field trips for the county’s 147,000 K-12 students, who come from nearby schools and from as far away as Farmington, population 207.

The new science lab has been a boon for schools that lack the funds for field trips or the newest equipment, said Kelly Castillo, a middle school science teacher at New Hope Elementary, a K-8 school in Thornton.

With 200 students, New Hope Elementary School District — located amid the grape, olive and cherry farms between Stockton and Sacramento — is the smallest district in the county and has one of the highest percentages of low-income students. Ninety percent of New Hope students qualify for free or reduced-price meals.

Castillo has taken her students to the fab lab several times. They’ve built robots, created game controllers, made 3-string guitars and produced their own wooden bookmarks using design software and a laser cutter. One popular project was building towers with playing cards and plastic pieces cut from a laser cutter, testing how much weight the tower could hold, then trying it again with different materials.

Before the fab lab, Castillo would do the same lesson but use marshmallows and toothpicks, or popsicle sticks and tape. Sometimes it worked, usually not.

“It’s not just a field trip. It’s something to look forward to, because they’re excited to do the engineering, to be part of the robot team that wins, to find their own answers,” she said. “I love that they’re being exposed to so much stuff that we couldn’t do otherwise. I almost can’t put it into words. It’s knowledge. It’s experience. It’s intrigue. It’s just been amazing.”

The County Office of Education paid for the fab lab with $500,000 from its general fund and $500,000 in prison mitigation fees related to the opening of an inmate medical facility in Stockton.

The undertaking was part of a broader effort to improve science and technology education in the county, said Superintendent James Mousalimas. In addition to the fab lab, the County Office of Education is funding low-cost summer camps for 2nd-through-12th-graders in coding, biotech, robotics and other scientific topics; additional science training for K-12 teachers; an environmental education school for 4th-graders at a 200-acre property along the San Joaquin River and a coding school for high school graduates.

“High-quality STEM education is absolutely critical for students, especially in San Joaquin County. Our job is to provide those opportunities,” Mousalimas said, noting that one of the county’s long-term goals is to prepare more students for science careers — especially in agriculture, one of the primary job sectors in the Central Valley. Agriculture scientists study soil, plants, pests, irrigation, animals and other topics related to farms and food production.

Rural counties in other parts of California are also expanding their science offerings.

In Sonoma County, the Office of Education opened a small $30,000 design laboratory in 2015 outfitted with laser cutters, 3-D printers, a mill and other equipment at the agency’s main office in Santa Rosa. Located in a refurbished hallway, the 800-square-foot facility hosts field trips and teacher trainings and allows teachers to check out equipment to take back to their schools.

Sonoma County includes about 40 school districts, the largest of which is the 11,000-student Santa Rosa High School District. But its northern portion is mostly rural, encompassing, for example, the 24-student Fort Ross Elementary School along the Pacific coast and the 59-student Horicon Elementary in the rugged coastal hills, as well as small multi-school districts like Cloverdale Unified, with 1,400 students.

To reach the county’s most remote schools, the County Office of Education is creating a mobile science lab on a 30-foot trailer that will bring science equipment directly to students and their teachers.

“Before 2015, it was hit or miss. It really depended on the individual teacher,” said Casey Shea, who runs the STEM lab. “But this has been incredibly popular. There are times when I wonder how I’m going to meet all the demand. … The tools and technology have never been more affordable, so even rural areas can become innovation hubs.”

In Tuolumne County in the Sierra foothills, the County Office of Education funds free science camps, field trips to local ecological sites, robotics competitions and — through a partnership with the San Francisco Public Utilities Commission, operators of nearby Hetch Hetchy Dam — a “dinner with a scientist” program where 6th-through-12th-graders can meet agency scientists.

The Office of Education also spent $45,000 in 2015 to open a “think space” in an old storage room for science field trips and teacher training and created a new director of innovation position to organize and promote science education initiatives countywide.

The hope is to give students the skills they need to compete in the modern job market once they leave Tuolumne County, said Cathy Parker, associate superintendent for educational services.

“Our kids often leave the community after they graduate and we want to make sure they can enter the global job market and compete with students who have had these opportunities already,” she said. “Having these skills, in many ways, makes them citizens of the world.”

Another goal is to improve the job skills of the local workforce, so Tuolumne County will be a more attractive place for technology companies to locate, she said.

“We’re never going to get Google or Amazon to move here, but there’s no reason we can’t get smaller tech companies to locate here — software, engineering, design, smaller cottage industries,” she said. “They’re more likely to come if we have young people who have the skills they need.”

Rural schools might face challenges in teaching science — distance from major science centers, lack of funding, staff and equipment — but in some cases rural schools might be better positioned to teach science than their urban counterparts, said Beverly DeVore-Wedding, rural science education expert for the National Science Teachers Association and a science teacher in northwestern Colorado for 26 years.

Rural schools are often located near public agencies with science missions, such as national forests, parks, water agencies and agricultural extensions, that either offer science programs directly to K-12 students or have scientists who can work with students on special projects like forest management or invasive species, she said.

In Wyoming, for example, students at rural schools have worked with biologists at Yellowstone National Park to survey bighorn sheep and study pikas. In Colorado, rural students have worked with the state water board on river studies, monitoring alkalinity, metals, macro invertebrates and pH levels.

“A $1 million fab lab sounds awesome, but not every rural county will be able to afford that,” she said. “A lot of rural schools will take advantage of what they have available locally — and there’s usually a lot. The key is to connect with other organizations.”

The internet is also a great resource, especially for teachers who might be the only science teacher at their school or who need help with curriculum, she said. NASA, Smithsonian and other science-focused organizations have a plethora of free lessons online and even offer Skype lessons for classes to meet with scientists virtually, she said.

Venturing out of the classroom is also important, she said. Weather, geology, biological diversity and most other science subjects can be taught right outside the classroom doors. A rural school may seem geographically isolated, but can be ideally situated when studying science, she said.

Still, rural science teachers can get frustrated by the lack of resources. Brown, San Joaquin County’s STEM director, said he was often stymied when trying to teach robotics or programming when he was a science teacher at Tracy High, where he worked for 25 years before taking on his current role.

“I tried, but there just weren’t that many places to turn,” he said. “On opening day at our fab lab, it was so wonderful to see all the parents working with the kids, students building things, adults learning how to use robots, high school students demonstrating their latest creations … The whole community was involved. It was just electric in there.”