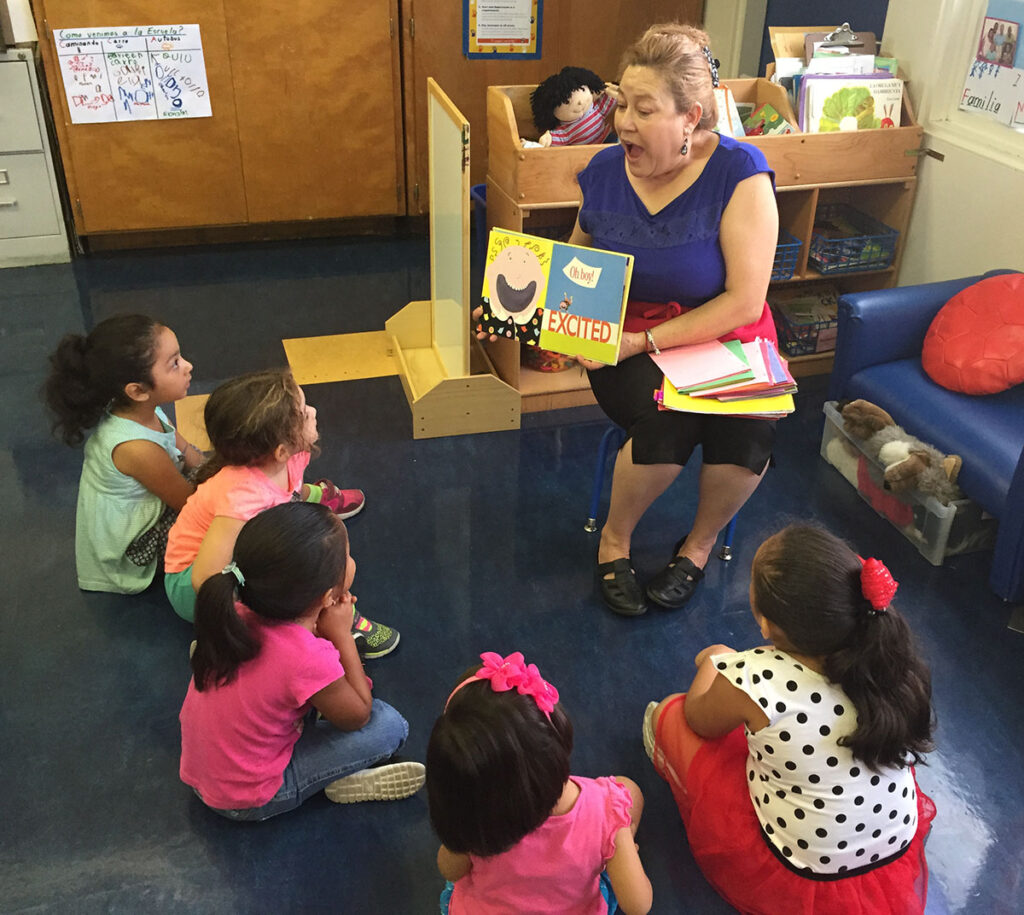 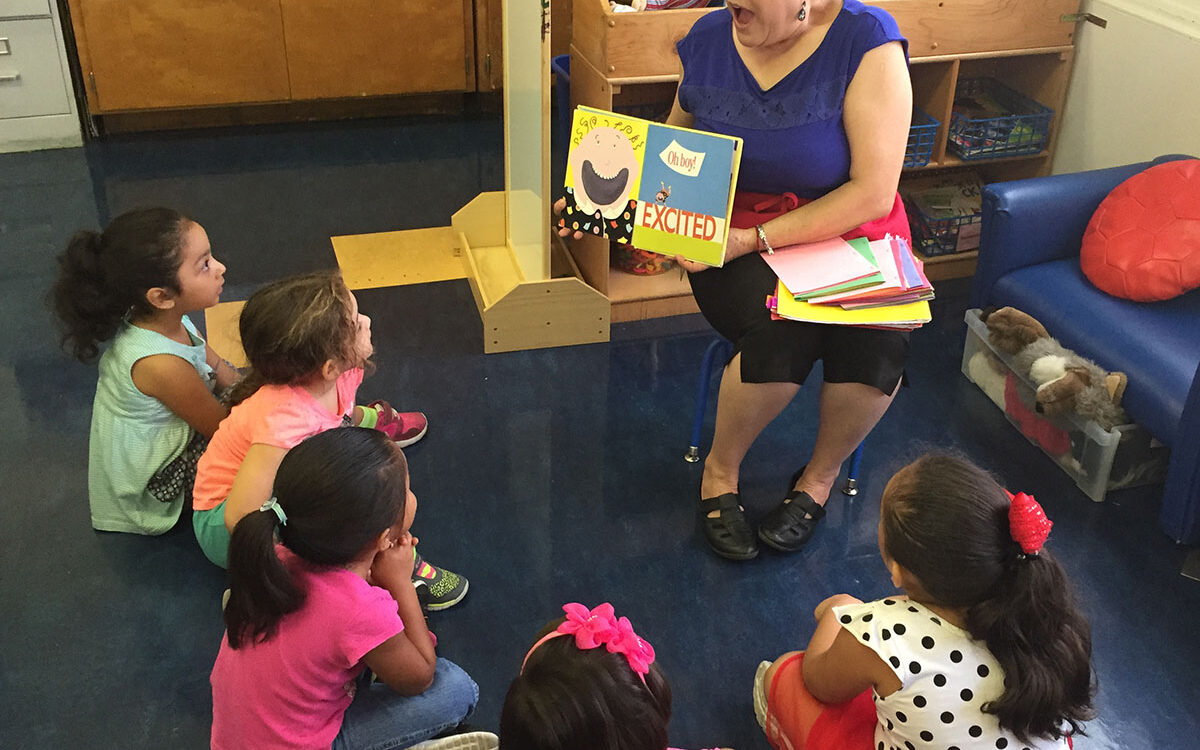 When Laurel Parker, who directs preschool programs in the Norwalk-La Mirada Unified School District southeast of Los Angeles, assigns children to classes, she knows most come in speaking a language other than English at home.

What happens next is central to a major challenge facing California education: how to make sure that preschool children with limited English-speaking abilities enroll in kindergarten ready to learn.

It is a goal that experts say preschool programs across the state have only partially been able to fulfill.

Laurie Olsen, a long-time researcher and expert on English learners who directs the Sobrato Early Academic Language Initiative, said that providing access to quality preschool should be a major part of any strategy to close disparities in school readiness. “That’s true for all children,” she said. “But it’s particularly true for children who are coming to our school systems from homes where English is not their home language.”

She said that awareness of preschool’s role is growing, but that California still has a long way to go. “We’re really far behind in mounting the kinds of programs and services that are needed” for English learners, she said.

nts released in September. Two-thirds of English learners in grades 3 through 8 and grade 11 failed to meet the standard on the assessments, falling into the lowest of four achievement levels on the tests.

Preschools have such an important role to play in getting children prepared for kindergarten because about half of the children in the state’s largest publicly funded preschool programs – Head Start and California State Preschool Program – come from homes where a language other than English is spoken. The two programs together enroll nearly one-quarter of all 4-year-olds in California.

However, it’s unclear how well these children can speak English by the time they enroll in preschool because the programs don’t publicly report the numbers of children by their English-speaking ability – only those who report having another home language.

While the numbers aren’t regularly collected, a Public Policy Institute of California report estimated that 20 percent of California’s 4-year-old children were “linguistically isolated” in 2007. Such children are described as those who have at least one parent who is an immigrant, the primary home language is not English and the parents don’t speak English well.

The need for preschool

Research shows that how well English learners are educated before they reach school-going age can be crucial to their future academic success. Those children start out academically behind classmates whose first language is English when they start kindergarten. But those who speak little or no English at home improve their reading skills if they attend preschool, according to the PPIC report.

Video on working with English Learners in preschool

At the same time, the report noted that children of U.S. born parents enrolled in preschool improve their skills at about the same rate as English learners in preschool – which “means that the gaps in achievement levels between the two groups does not appreciably change.”

A recent analysis by Oregon State University researchers of students in Los Angeles Unified found that English learners who started kindergarten with strong academic language skills – vocabulary and abilities needed to be successful in school – in either English or their native language, were more likely to be on par with their English-fluent peers by the time they left elementary school.

Click here for definitions and examples of academic vs. social language.

“This suggests that preschool programs that are working to develop students’ academic language and literacy skills in the primary language are very beneficial to their long-term outcomes,” said Karen Thompson, the Oregon State assistant professor of cultural and linguistic diversity who led the study.

Over the past decade especially, early educators and researchers have done considerable work in California and beyond to integrate the needs of English learners into the preschool curriculum.

In 2008, the California Department of Education produced the Preschool Learning Foundations – essentially a guide for what children should be able to know and do during their preschool years, along the lines of academic standards developed for children in kindergarten through 12th grade.

As the preschool learning foundations were being considered, California officials at first did not include specific preschool standards for English learners, despite their large numbers, said Marlene Zepeda, professor emeritus at California State University Los Angeles in child and family studies. She was among those who pushed to make sure the preschool standards were included to cover English language development – the process by which English learners acquire English proficiency. There is now a full chapter in the first volume of the preschool foundations that describes the listening, speaking and writing skills children should acquire in preschool.

California was the first in the nation to produce such preschool standards for English learners, and they have been used as a benchmark for other states, Zepeda said.

The state followed up in 2010 with the California Preschool Curriculum Framework, which provides strategies for preschools to help English learners.

“We’re really far behind in mounting the kinds of programs and services that are needed,” said Laurie Olsen, a longtime researcher of English learners.

Both recommend that children be taught in their native language, alongside English, to improve vocabulary, as research shows that the native language serves as a bridge for students’ success in English.

As the Preschool Learning Foundations noted, “Children who have the skills to understand and communicate in their home language will transfer that knowledge to their learning of a second language, resulting in a more effective and efficient second language learning process.”

The framework offers specific suggestions for preschool classrooms working with English learners. They include:

The state also produced the California’s Best Practices for Young Dual Language Learners in 2013 as a compilation of research papers to serve as a guide “for the formulation of best practices for supporting the learning and development” of English learners.

Despite the wide recognition of preschools’ central role in preparing children for kindergarten, they face multiple challenges in helping English learners succeed. Classes often lack teachers or staff members who speak the children’s native languages or lack training on how best to instruct them. Preschool programs are often disconnected from the K-12 system, with preschool teachers not knowing what elementary schools expect or do, and vice versa.

The preschool program at the Norwalk-La Mirada Unified School District illustrates the challenges it and other centers throughout the state face – including serving children speaking a range of languages, at different levels of ability.

The district runs both Head Start and state preschool programs, which means it receives funds from the federal government for Head Start children, and from the state for its preschool children. Some children are enrolled in both simultaneously.

The district’s preschool program has doubled in size in about a dozen years, now serving about 1,200 children, 60 percent of whom speak another language at home. The vast majority of children come from Spanish-speaking families, but a few speak other languages, such as Korean and Tagalog.

The program, southeast of Los Angeles, is the largest under the Los Angeles County Office of Education. It operates classes out of nine schools, including the standalone Ramona Preschool campus, which serves solely young children and their families near the Interstate 5 freeway.

While the program tries to group children in classes by their language abilities, classrooms don’t always end up with a neat division of children speaking the same languages.

On a recent Monday in September, a class at the Ramona Preschool had mostly children who spoke English, with two who spoke Spanish. One was bilingual and the other had just recently arrived from Mexico and spoke only Spanish.

A second classroom was filled with children who were mostly Spanish-speaking.

In that class, teacher Marisol Garcia Del Ruiz taught in Spanish in the morning, moving to English in the afternoon. The goal was to strengthen the children’s primary language so they could transfer their skills – reading, writing and counting – to English.

While children were on the rug, Garcia Del Ruiz taught the word “libros,” or books. She asked the children to spell it out. “L!” shouted one child. In Spanish, she said that L is in English, but “El –eh” is how to pronounce the letter in Spanish. When children talked to her in English, she usually answered in Spanish much of the morning.

To help ease children’s path to kindergarten, the district’s preschool and kindergarten teachers meet two to three times a year to make sure what children are learning in preschool lines up with what they need in kindergarten.

Laurel Parker, the district’s preschool director, said she believes the low Smarter Balanced scores of English learners in grades 3 and higher are causing district officials to look deeper at what preschools can and must do for English learners. “We can’t just send kids over (to kindergarten) not being as prepared as we can make them,” Parker said.

This article is the first in an occasional series of reports on the challenges facing preschools in preparing English learners for kindergarten and beyond.