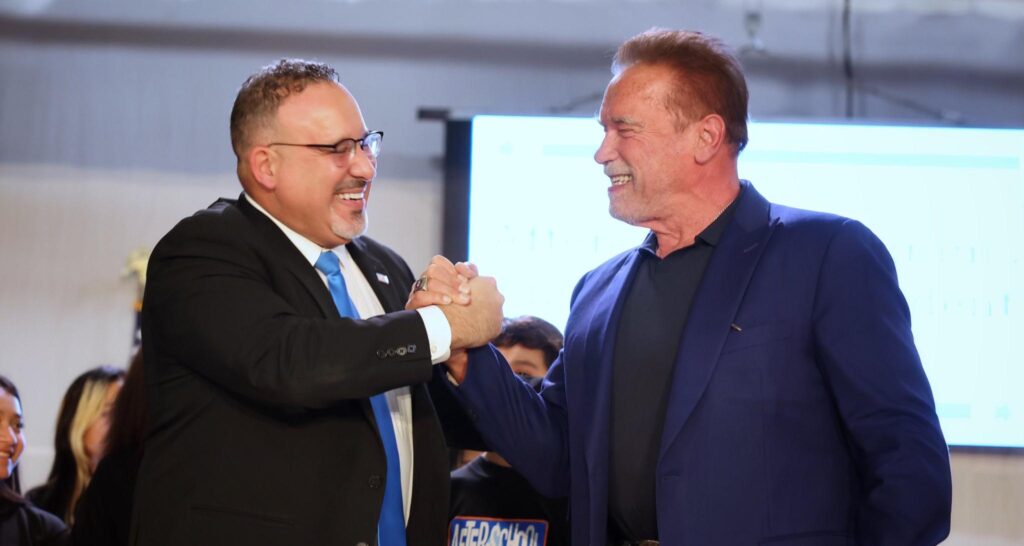 U.S. Secretary of Education Miguel Cardona and former California Gov. Arnold Schwarzenegger joined students at a school in Los Angeles County on Wednesday to promote Cardona’s efforts to expand after-school programming and celebrate the 20th anniversary of a California measure led by Schwarzenegger that dedicated more funding to it.

Cardona is pushing schools to allocate their federal Covid-19 funds toward extracurriculars like those showcased at the Bell Gardens Intermediate School, which is in the Montebello Unified district in the Southeast Los Angeles area. Students welcomed the two with a dance performance and showed off their drumming and robotics skills acquired in the after-school program.

Schwarzenegger championed Proposition 49, which California voters approved in 2002 to allocate more than $400 million to elementary and middle schools to provide safe spaces and activities for students after school.

According to Cardona, California spends more on after-school programming than the other 49 states combined. He said he is urging other states to follow suit and prioritize it. As the midterm election brings change to Congress, including a Republican majority to the House, Cardona said he hopes Congress will not view education as a partisan issue.

“Our goal is not just to recover from the last two years, but to really give students more opportunities to thrive, to be engaged, to go on to postsecondary education,” Cardona said. “That takes a commitment on both sides of the aisle.”