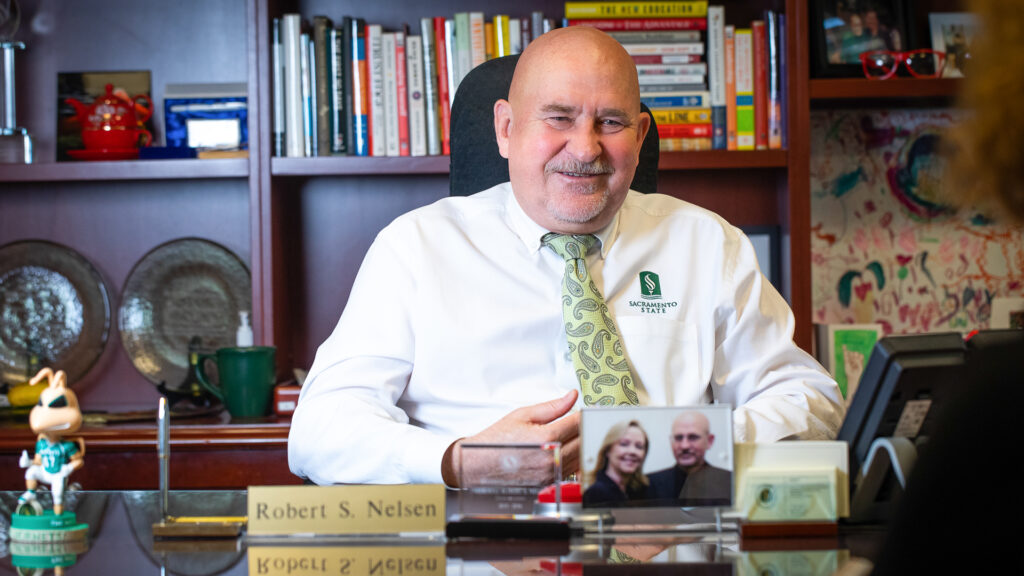 Nelsen, who came to the university seven years ago from Texas, brought the university, long considered a commuter school, a sense of community. During his tenure, he oversaw the expansion of the university including the building of new residence halls, parking garages and classroom buildings.

“When I came here, I said that this was such a great university, even I couldn’t screw it up,” said Nelsen in a video message to the community.  “You proved me right. We didn’t screw it up. We got stronger and better. We have the Tschannen Science Complex, we are going to have a new engineering building, the Student Union has an additional 77,000 square feet. The WELL has been expanded, especially for mental health. And, we can’t forget the arts. The art sculpture lab is just about to begin to be built.”

The university also has doubled the number of scholarships given to its students and improved graduation rates by 187% since Nelsen became president.

California State University interim Chancellor Jolene Koester said Nelsen is “a brilliant, compassionate, and student-focused leader who has successfully guided Sacramento State through a period of remarkable growth and transformation.”

“Retirement is not easy,” he said in the video. “I’m not looking forward to July. But, change is good. We need new blood. We need new ideas. These are times when we must move forward. Remember, we are On the Rise, and we must continue to rise.”

Nelsen is known for being accessible to students. He often walks across campus greeting students with the Sacramento State Hornets salute —raised pinkies and a resounding “stingers up.” During speeches, he has been known to become emotional and choke up when talking about a student’s struggles and achievements.

The video message was no different. This time, with his wife, Jody, by his side he raised his pinkies, “Sac State is No. 1. Stingers Up.”