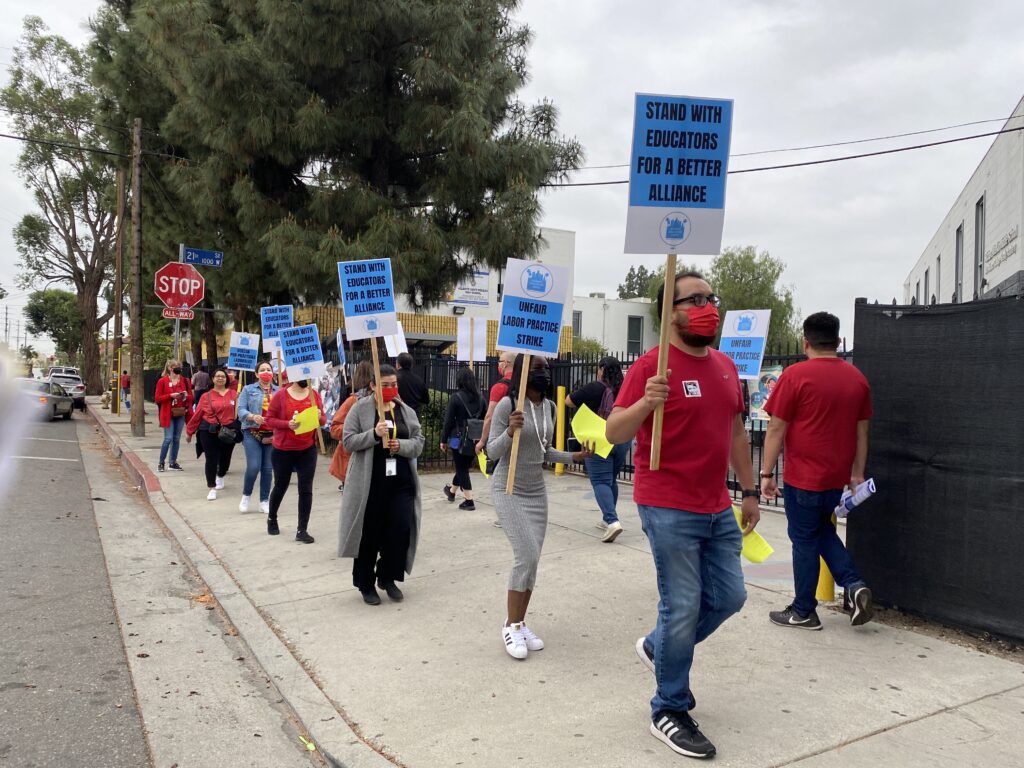 Educators at the schools have attempted to unionize with United Teachers Los Angeles since 2015 and were given the green light to do so in 2020 by the California Public Employee Relations Board, but they say the charter network continues to stall those efforts for negotiation. The charter network is appealing the 2020 decision in court.

“Over the last two years, they’ve repeatedly ignored us at board meetings; they’ve ignored the letters that we sent to them; they’ve ignored our walk-in; and they continue to appeal and appeal decisions,” said seventh grade teacher Brittany Cliffe, a bargaining team representative at Richard Merkin Middle School. “They’ve been ordered three times to bargain with us, and all three times they have appealed it to the next level they could.”

In February, the employee relations board announced that Alliance was in violation of the Educational Employment Relations Act for refusing to recognize and negotiate with the union following changes to its governing structure. Between 2018 and 2019 schools filed and got approved separately to unionize but the reorganization merged the Alliance schools into one entity. Despite that, the employee relations board held that the charter network would have to recognize the initial unionization efforts.

Alliance said it cannot legally bargain because of the appeal but has offered to connect with UTLA.

Cecily Myart-Cruz, president of UTLA, which represents more than 35,000 educators across Los Angeles Unified and includes educators from several charter networks, called out Alliance management for anti-union tactics and for driving out educators amid a shortage.

Alliance Educators United is pushing for more professional development, more social emotional support and additional psychologists and social workers to support the campuses. But the largest issues, according to many of those who attended the rally near Alliance Gertz-Ressler/Richard Merkin 6-12 Complex, were staff retention and class sizes.

“If you can’t keep teachers, your students are never going to learn,” Alliance Leichtman-Levine Environmental Science High School visual arts teacher Erin Belefski said. “They need those relationships. Researching systemic issues in a community like this that’s underserved. That’s the number one problem: kids cannot learn when they do not have teachers.”

According to EdData, teachers at Belefski’s school in particular averaged three years working at the campus during the 2018-19 school year.

In a statement, Alliance opposed the decision to strike, calling it a disruption to the education of students and pointed to the appeal that is currently ongoing.

“For two years, UTLA has known that Alliance intends to appeal to the California State of Appeals regarding the ruling that UTLA can bargain contracts at individual alliance schools,” the statement read. “Yet they continue to use our legal right to appeal as an organizing tool to strike at four Alliance schools. A strike harms scholars and families and does nothing to speed up the court’s ultimate decision.”

The strike has been one of many attempts to push for negotiation with the charter network. Though it will only last a day, efforts to continue that push will go on, said Enrique Vasquez, a bargaining team representative who teaches government and economics at Alliance Gertz-Ressler High School.

“We’re going to continue, but we just had to find different methods to get their attention and get the board to start bargaining with us,’ Vasquez said. “Because with how things look in our society right now in the community due to the pandemic, we see more people are organizing. … We see this revival of organized labor. We got history on our side.”

For high school teacher Tyler Kenney, who joined Alliance Leichtman-Levine Environmental Science High School in 2020 when the union was just approved, the recent unionization was a motivating factor for taking the position, which has made the delays difficult.

“It really motivates me to call on Alliance to do what they’re obligated to,” he said. Majority of teachers at all schools have been demanding this for years. I see really good teachers leaving because of the cognitive dissonance that Alliance is showing in claiming that they’re a social justice institution and yet being unwilling to respect labor rights.”

Note: This piece has been updated with comments from Alliance College-Ready Public Schools.