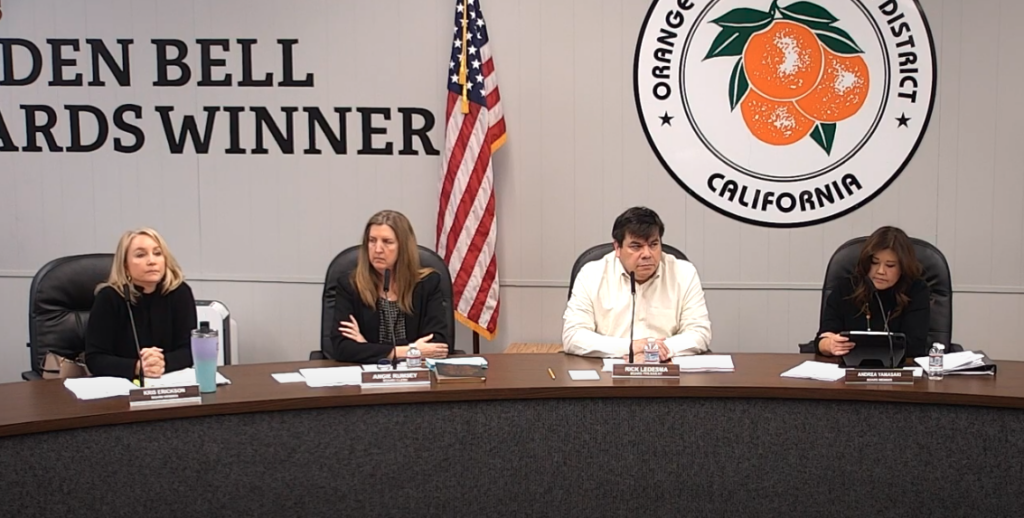 With one day’s notice during winter recess, a conservative majority on the Orange Unified school board fired respected Supt. Gunn Marie Hansen with no explanation after a closed-door meeting Thursday night.

The vote followed impassioned public comments from parents, teachers and community members who pleaded with them to change their minds on what they anticipated was coming. They warned them of the consequences, including expensive litigation and hundreds of thousands of dollars in severance payments. As the board members were voting, parents began circulating petitions for a recall election that will plunge the 26,000 student district into further conflict.

“Give this time and thought, for your future, our future. This is really ill-thought through move,” said Jeanne Matson, an elementary teacher and resident of the district.

Reflecting sharp divisions in the community, the board flipped in November when Madison Klovstad Miner, a former speech therapist with Santa Clara Unified, defeated 22-year board member Kathy Moffat, by 0.2% – 221 votes out of 61,845 votes cast. Three incumbents, board President Rick Ledesma, who led the dismissal effort, and two who backed Hansen, Kris Erickson and Andrea Yamasaki, won re-election. Ledesma and conservative candidates had run on a “parents’ rights” and complained about masks and school closures during Covid and about classroom instructions on race, critical race theory in particular, and gender.

Among the supporters she cited in her Ballotpedia answers, Miner listed the three other board members who ousted Hansen and described herself as “an educator, mama bear of four children and active participant in the Orange Unified community for the last 37 years.” Her top three priorities if elected would be to “cut wasteful spending and return tax dollars to the classrooms,” “protect our parents’ rights with medical and school choice decisions,” and  “adopt better options to replace the current ethnic studies and sex ed curriculum.”

In a comment in which she left the dais with the other board members to comment from the audience, Erickson responded, “Just because can do something does not mean you should do something. Elections have consequences; 221 votes not make a mandate and don’t pretend it does.”

As did others, she called Hansen a “qualified and loved” superintendent who brought the district back to normal, earlier than other districts in the county, following Covid. “Now, are you going to burn it down by firing the CEO?”

Only one of five-dozen speakers, amid two hundred in the audience defended the pending dismissal. She identified herself as a Hispanic parent who complained that low-income schools were not receiving enough funding and that test scores had dropped for several years.

The others, in comments from furious to tearful, alternated from castigating to trying to reason with the board. One woman cited Scripture and appealed to board members’ faith. Hansen and Corella “care and are devoted to students,” she said. “Reach deep and think about your integrity.”

Neither Hansen nor Corella was at the meeting. Both were said to be out of the country during winter vacation, with Hansen treating an ailing parent.

Sara Pelly, the principal at Fletcher Mandarin Language & GATE Academy, told board members, “I work for you and this is your decision but I suggest you not make it in haste. Collect information for what is best for kids.”

The board members appointed Edward Velazquez, a former superintendent of Montebello and Lynwood unified school districts, as the interim superintendent.