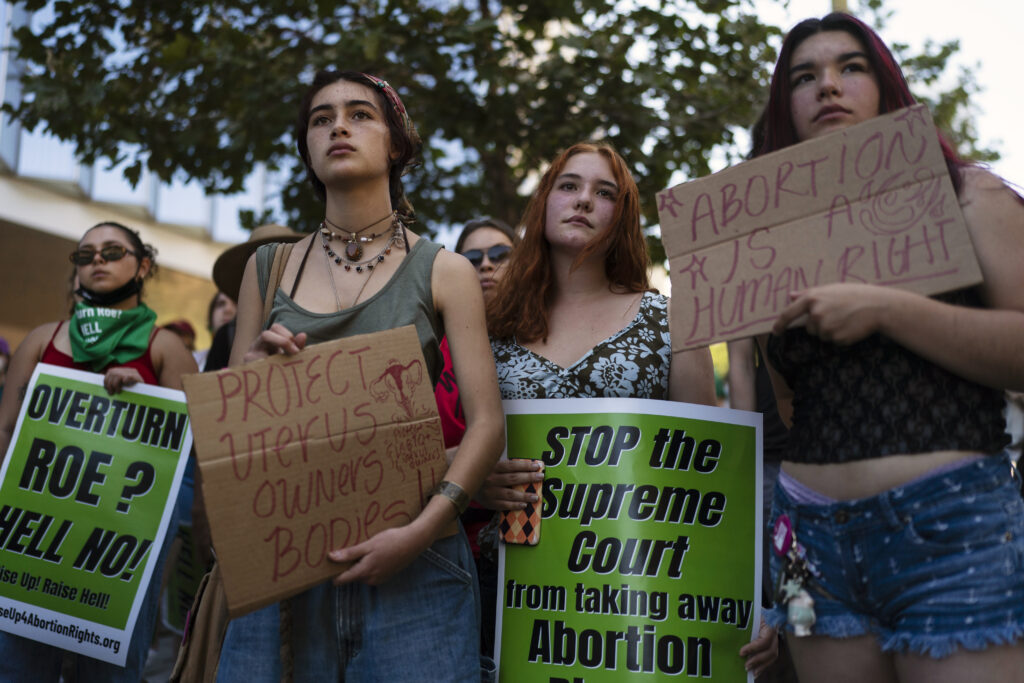 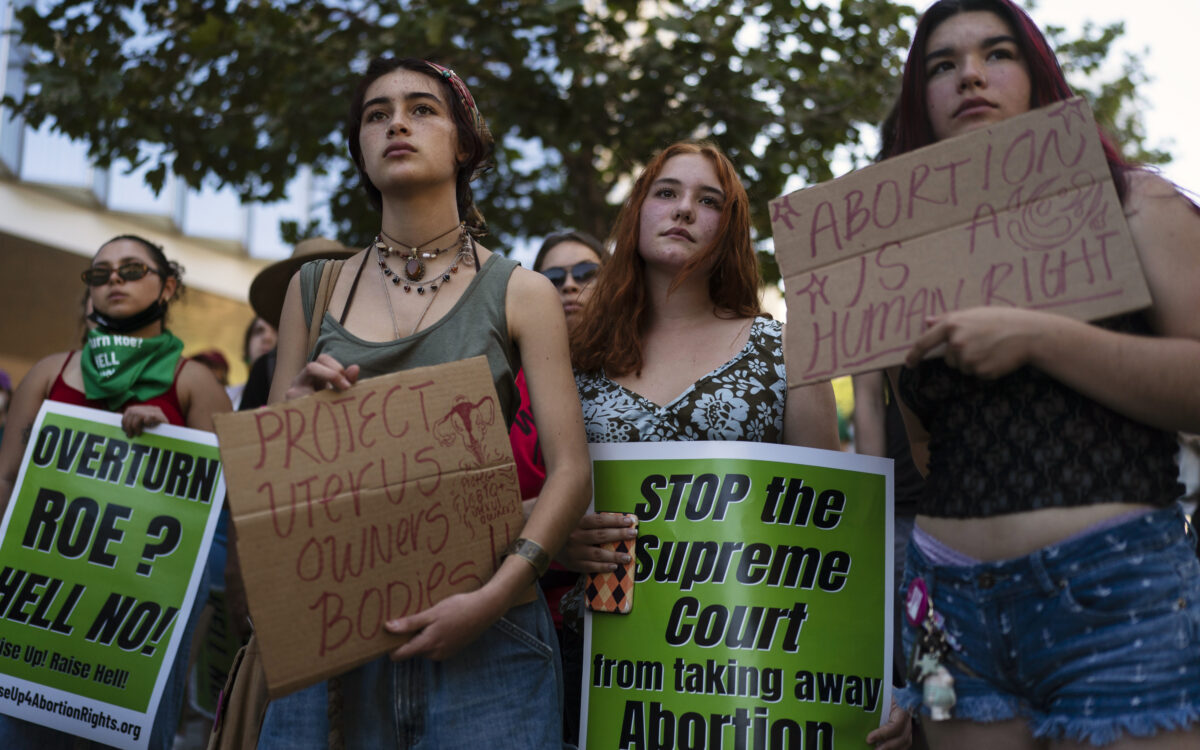 Credit: AP Photo / Jae C. Hong
A group of young women listen to a speech during a protest outside a federal courthouse in Los Angeles on June 24, 2022. The Supreme Court has ended constitutional protections for abortion that had been in place nearly 50 years in a decision by its conservative majority to overturn Roe v. Wade.

Credit: AP Photo / Jae C. Hong
A group of young women listen to a speech during a protest outside a federal courthouse in Los Angeles on June 24, 2022. The Supreme Court has ended constitutional protections for abortion that had been in place nearly 50 years in a decision by its conservative majority to overturn Roe v. Wade.

Californians’ constitutional rights to abortion may be protected, but questions abound over what effect the Supreme Court’s Friday decision to overturn Roe v. Wade will have on out-of-state students who come to the state’s universities.

Jodi Hicks, the president of Planned Parenthood Affiliates of California, said young people outside of California seeking abortion will now be faced with the daunting prospect of having to travel outside their state and navigate a new health care system.

As for the young Californians who leave the state to attend college in the 26 states expected to ban or severely restrict abortion, Hicks asked, “What rights do they have when they go there?”

Unintended pregnancy and abortion rates are highest among those 18-24 years old — the ages of most college-going students. A 2017 study found that college students faced many barriers in obtaining abortions, including cost, transportation and wait time. That was part of the impetus behind a 2019 state law that requires student health care services clinics on California State University and University of California campuses to offer abortion by medication. It goes into effect in 2023 but does not include the state’s community colleges.

Many university campuses say it’s still too early to examine the decision’s effect on out-of-state students, but a UC system spokesperson said the system would be monitoring the situation.

Gov. Newsom champions California as a sanctuary for those seeking abortion

In Los Angeles, 17-year-old Ixchel Sanchez Jiménez is reaching out to close friends in Georgia to check in on how they’re feeling given that the ruling paves the way for the state’s six-week abortion ban bill to go into effect.

“I don’t understand how the Supreme Court was able to make this decision, even though so many people are against it,” said Sanchez Jiménez, who is a high school senior and plans to attend community college either in the Los Angeles area or San Francisco.

She moved from Georgia while in elementary school, but she has visited nearly every year since then and witnessed the drastic difference between her growing access to sex education versus that of her friends.

Knowing that access to reproductive rights is important to her is a crucial reason she’s remaining in California in the near future after graduating from high school.

Out-of-state providers are already receiving medical training that they can’t receive in their state. University of California San Francisco has hosted and funded residents from Texas in the wake of a law that severely restricted access to abortion, according to Dr. Josie Urbina, a UCSF family planning fellow and clinical instructor in obstetrics and gynecology at San Francisco General Hospital.

UC President Michael Drake said he was “gravely concerned” that the decision removes the right for people to make private, informed health care choices for their futures.

“Despite this decision by the Court, we will continue to provide the full range of health care options possible in California,” Drake said in a statement. “We will also continue to offer comprehensive education and training to the next generation of health care providers, and to conduct life-saving research to the fullest extent possible.”

CSU interim Chancellor Jolene Koester said she was “deeply concerned” about the impact the decision will have not only on people’s ability to make an informed decision about their personal health but their ability to pursue educational and occupational opportunities.

Larissa Mercado-López, a professor and department chair of women’s, gender and sexuality studies at Fresno State, said she’s following the implications the decision will have for birth control, same-sex marriage and the possible criminalization of miscarriage.

“Few people will remain untouched by this decision and its rippling effects,” she said. “I’m also concerned about what this means for Title IX and its protection of students who need time off for abortion recovery.”

She said going forward in her department at Fresno State, “We will be doubling down on education about reproductive justice, the intersections of queer identity and health care, the law under patriarchy, and the connection between the assault on reproductive rights and gender and family inequality.”

Fresno State student D’Aungillique Jackson said she woke up to the “soul-crushing” news on Friday, feeling “like I was in a whirlwind.”

The sociology major and former student body president led Black Lives Matter rallies in Fresno in 2020 when she was president of the Fresno State chapter of the NAACP. She said the weight of it all feels similar to that summer.

“Waking up, (feeling) like, on top of the color of my skin, my body is being attacked, you know, my privacy, my data, is being attacked. It kind of just feels like I haven’t really woken up yet.”

Gov. Gavin Newsom and other state leaders held a news conference Friday where they championed a vision of California as a sanctuary state for those seeking abortion and reproductive care.

Shannon Olivieri Hovis, the director of NARAL Pro-Choice California, advocated for a raft of state legislation from this legislative session — 16 bills in all — that will not only cement reproductive access in California but also for those seeking abortion from other states. That includes the 16 states where abortion is illegal or will soon be illegal now that Roe v. Wade has been overturned.

One of those bills, SCA-10, will allow voters this November to enshrine the right to reproductive freedom, including abortion and contraceptives, in the California Constitution. Another bill specifically seeks to protect a patient’s right to privacy when seeking abortion services. On Friday, Newsom signed into law AB 1666, which seeks to protect those seeking abortion out of state or those who provide aid or provide them with services from civil actions.

“We will not aid, we will not abet in their efforts to be punitive, to fine and create fear for those that seek that support,” Newsom said. “We are proud to provide it — and we do.”

Everyone in California has the right to choose an abortion under state law, said Catherine Cohen, a legal scholar at the UCLA Center on Reproductive, Health, Law and Policy. But what is less clear is whether this can stymie a law, such as the Texas law that empowers private citizens to sue those who are aiding or abetting out-of-state abortions.

Residents in California would be most strongly protected, Cohen said. Those who live in Texas are at greater risk legally. The most legally vulnerable situation would be an abortion provider who flies from California to Texas.

“It’s a really complicated question. It doesn’t have a clear answer,” Cohen said. “It would have to be worked through the courts.”