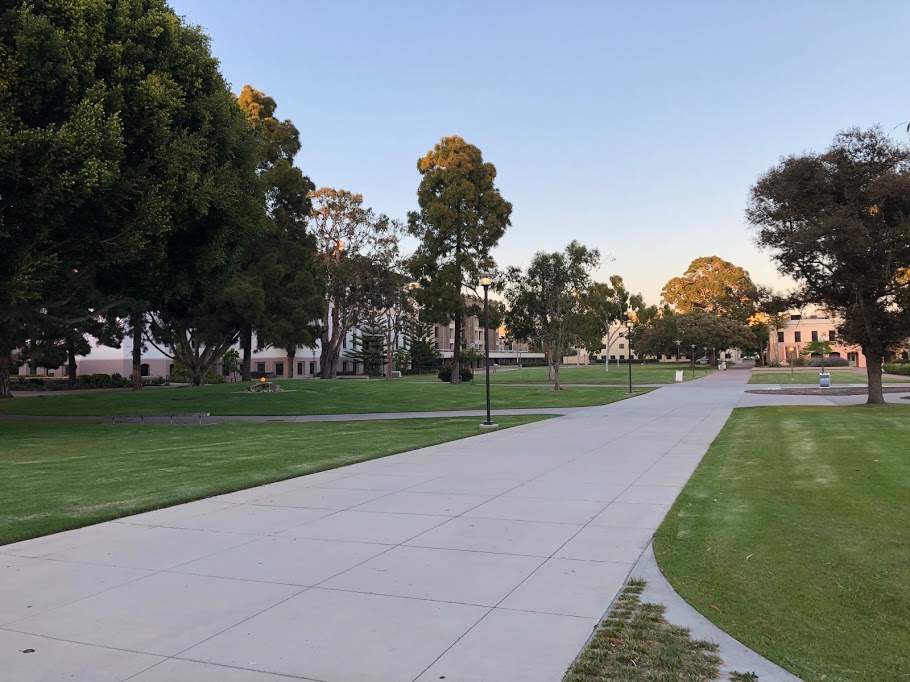 Another academic term at California colleges and universities has been upended by the coronavirus.

At campuses across the University of California and California State University systems, in-person classes have been suspended and won’t resume until the end of the month — or later in some cases — because of a surge of Covid-19 infections brought on by the omicron variant.

For some students, the current shutdown is reminiscent of the initial suspension of in-person classes in March 2020, when campuses announced they were shutting down for just a few weeks but ultimately ended up doing so for the remainder of the academic year.

In some ways, this term is already similar to 2020. For example, seven UC campuses where classes started Jan. 3 initially announced that they were suspending in-person classes for two weeks. At six of those campuses, the pause on face-to-face instruction has been extended until the end of the month. (UC Santa Barbara is allowing faculty to decide whether to teach their classes online between Jan. 18 and Jan. 31.)

The two UC campuses on the semester schedule, Berkeley and Merced, start classes Jan. 18 and will also be primarily online until Jan. 31. At CSU, one campus, Cal Poly San Luis Obispo, chose not to shift classes online and welcomed students back for face-to-face classes on Jan. 3. The campus is now dealing with a spike in infections.

Meanwhile, among the other 22 CSU campuses, the vast majority of them have chosen to delay in-person instruction.

But officials at some campuses say there is reason to be optimistic that the shutdown will indeed be a temporary one this time around. Covid-19 vaccines are required of UC and CSU students, who also must get booster shots. In 2020, there were no vaccines. More important, officials project that Covid-19 cases in California will soon peak, followed by a steep decline in cases. If that prediction holds true, the public health situation will be much more manageable by late January.

“I don’t understand anyone who can’t tell the difference between this and March 2020. If this were a class of mine, we would slow down and do an analysis of how we’re not in the situation that we were in two years ago,” said Jody Greene, associate vice provost of teaching and learning at UC Santa Cruz.

Getting back to normal delayed

Getting back to face-to-face classes and regular campus life is especially important to many juniors and seniors who have now endured years of Covid-19 disruptions to their college experience.

Benjamin Cheng is a fourth-year student at UC Davis studying managerial economics and will graduate in June. During his first quarter at Davis in fall 2018, classes were canceled for two weeks because of poor air quality stemming from the Camp Fire, a deadly wildfire in Butte County. Cheng was a sophomore when Davis shut down in spring 2020 because of the initial Covid outbreak. His junior year classes were online. The latest pause on face-to-face classes is nothing new.

“I was hoping that there would be some sort of normalcy this year. I miss the interaction with my peers and in-person events,” he said. Cheng had planned to go on retreats this month with campus organizations that he’s involved with, but that’s off. Now he’s even fearing a worst-case scenario where online classes get extended for the rest of the academic year and he isn’t able to participate in an in-person commencement in June.

“It would be a big bummer if we stayed online,” he said, though he added that he agrees with the university’s decision to temporarily move classes online given the number of Covid-19 cases in the Davis area.

One reason that Cheng and other students with similar feelings may be able to feel hopeful, however, is the nature of the current surge. The sharp increase in cases that California is currently experiencing will likely be followed by a “very steep decline” in cases similar to what happened in South Africa, said David Souleles, the director of UC Irvine’s Covid-19 response. Dr. Rochelle Walensky, the director of the Centers for Disease Control and Prevention, has said the United States as a whole may also see a similar type of steep decline. The omicron surge appears to already have peaked in the U.K. and may also be peaking in parts of the Northeast in the U.S.

“Models from many experts – at UCI, within the University of California, and across the country – suggest that the omicron surge may be relatively short-lasting, with high levels especially in our area for a few weeks to be followed by a return to lower (and manageable) levels,” UC Irvine Chancellor Howard Gillman wrote in a message to the Irvine campus community. “Of course, models are not facts, but they are also not random guesses. They are based on the best scientific evidence, and the best evidence available to me at this time is that we will be able to return to in-person instruction on January 31.”

At Cal State East Bay in Alameda County, President Cathy Sandeen has similar expectations for the upcoming semester, which begins Jan. 18. The campus has delayed in-person classes until Jan. 31, and Sandeen said campus officials will continue monitoring infection data, hospitalization numbers and county positivity rates to determine if the delay should be extended. But she sees resuming classes on Jan. 31 as a realistic possibility.

“We know our students do better when they have some in-person contact … so we didn’t want to reduce the amount of their in-person experience too much if we didn’t need to,” Sandeen said. “And in looking at the projections of when this surge was going to end, we thought that a two-week window through the end of January would be a pretty safe bet.”

Daniel Disaia, a politics major in his third year at UC Santa Cruz, has received his booster shot and, because of that, is not too worried about being exposed to the virus. In fact, he was frustrated by in-person classes being suspended, noting that college-age students are generally not at high risk from Covid, especially when vaccinated and boosted.

When classes were online in 2020 and 2021, Disaia said he struggled with his mental health due to the lack of socializing, and now he fears that will happen again as long as classes remain online. “I was looking forward to in-person classes because I had begun to find a sense of normalcy again,” he said.

Some students, though, are in support of virtual classes. Isaac Alferos, president of the Cal State Student Association and a student at CSU Fullerton, said he had been anticipating classes shifting online because many students traveled during the busy holiday season in December.

And he wasn’t alone. As early as October, student leaders across the CSU campuses had been urging university leaders to start the spring semester virtually, he said.

“We’re going into year three of Covid. This is nothing new for us, and we as students get it,” Alferos said. “Students by and large are in support of a virtual start, especially if it keeps students safe and healthy.”

Alferos added that he’s frustrated by the situation at Cal Poly San Luis Obispo, the one campus in the system currently holding face-to-face classes. He said he’s been taking complaints and calls from students nearly nonstop every day since the start of their winter quarter. “They really needed to start virtually,” he said.

Matt Lazier, a spokesman for the campus, said officials are confident they can maintain a safe in-person experience for students, pointing to evidence that omicron is milder than other variants. He also noted that the campus has mitigations including high vaccination rates, indoor mask requirements and a robust system of testing, isolation and quarantine.

The university tested all 20,000 students within the week of their arrival, Lazier said.

“We understood from the outset that we would detect a high number of positive students through mandatory testing,” Lazier said. “This mass testing and early identification of those positive essentially compresses and pulls forward the infection curve, allowing the university to minimize its peak and the spread of infection.”

Some of those students in isolation are being housed in “double-occupancy” rooms that allow two people to isolate themselves together. Lazier said the university’s isolation space was approved by the State Fire Marshal and public health officials.

More than 3,500 Cal Poly faculty, students and alumni have signed a petition demanding the campus administration mandate the use of N95 or KN95 masks on campuses, provide in-person classes in spaces that allow for social distancing and end practices that leave residential students in living situations with roommates who have tested positive.

And although some faculty members have chosen to make their classes virtual for the first two weeks, it’s only because their union allows 25% of instruction a quarter to be virtual, said Lewis Call, a history professor at the university and president of the campus’s faculty union.

“The faculty know what they need, and they know what their students need, and many faculty want to continue teaching virtually next week,” he said. “And they want to do so either out of concern for the health and safety of themselves or their students.” Lewis said the administration hasn’t responded to repeated requests. The faculty union is holding a meeting Monday to discuss their next steps. “I’m really proud of our faculty for stepping up to take the necessary actions to keep our campus community safe when management has been unable to do so,” Call said.

Souleles, the Covid-19 response director at the UC Irvine campus, said decisions like whether to keep classes online require a balancing act. Officials need to consider public health but also take into account the consequences of shutting down. In this case, it made sense to suspend in-person classes in Irvine because of the strain on hospitals in the region and because so many students and faculty are testing positive that being in person was implausible. But Souleles added that circumstances could soon change if cases decline and if students get their boosters.

Another key will be getting students back on campus before the start of in-person classes — and keeping them there — so that campus officials can identify positive cases and isolate them to prevent further spread. Irvine is asking residential students to return to campus seven days before their first in-person class so they can be tested twice five days apart and be sequestered for seven days if necessary.

At the Davis campus, Chancellor Gary May implored students in a letter to the campus community to “stay in the Davis area.”

“We need to stabilize our community, and that means staying put so that we can reduce the risk of introducing new Covid cases. We have the right tools and resources here in Davis, and restaurants and other local activities are still available. But we really need your cooperation so that we can return in-person,” he wrote.