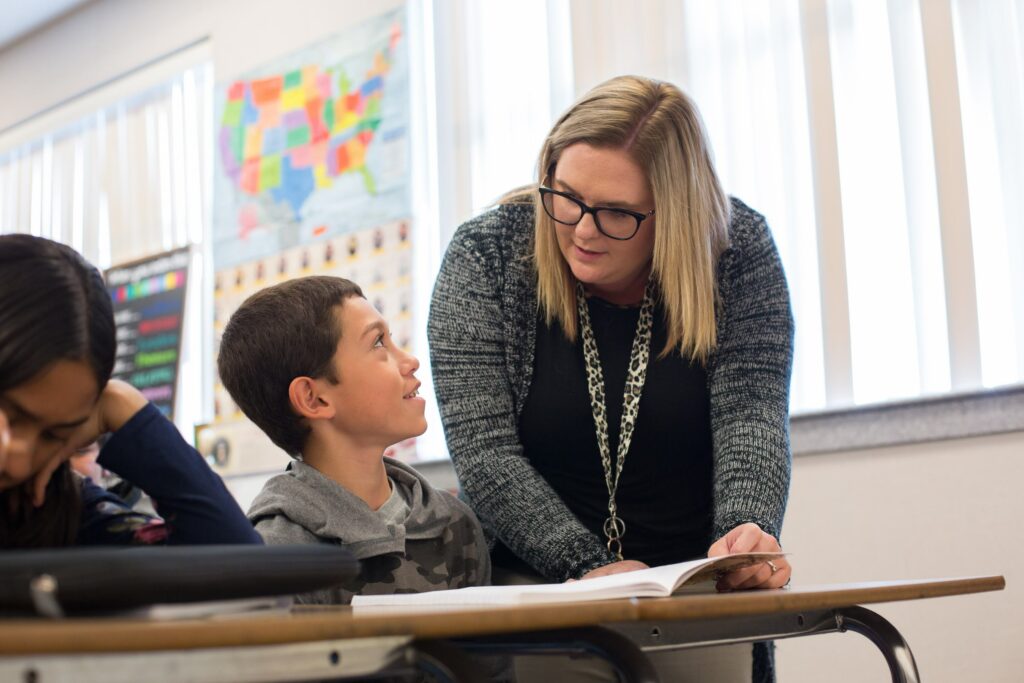 Tutoring options vary across schools in the district 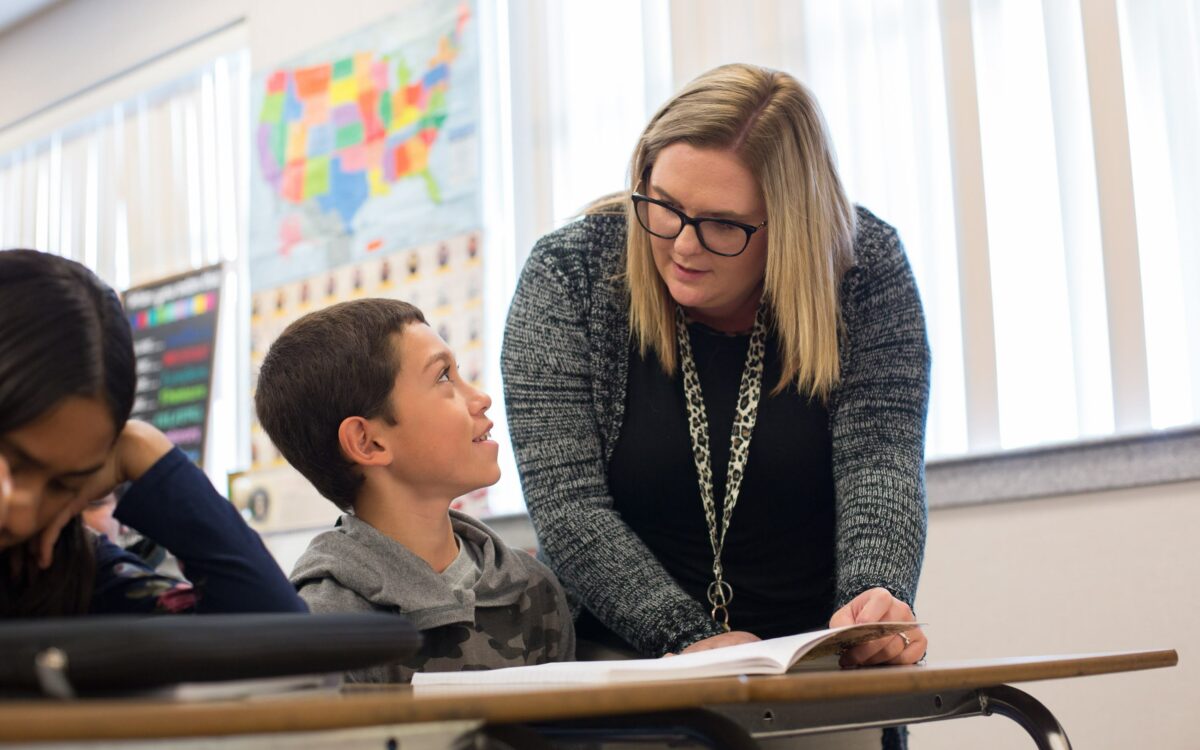 Julie Leopo/EdSource
While some schools rely on the district’s collaborations, others have relied on teachers to provide tutoring or relied on other online offerings meant to aid with homework or provide asynchronous guidance.

Julie Leopo/EdSource
While some schools rely on the district’s collaborations, others have relied on teachers to provide tutoring or relied on other online offerings meant to aid with homework or provide asynchronous guidance.

In response to the learning loss students across L.A. County have dealt with as a result of the pandemic, LAUSD has largely left tutoring up to the local districts and their schools, which has satisfied some and frustrated others. While also leaning on outside contracts, LAUSD reached less than 10% of students through its tutoring and small group instruction by March, and the district has since provided updated numbers that indicate 20% of students have now received tutoring

“I know not all the children are going to need the same tutoring,” Sanchez said in Spanish, noting her frustration that her son’s school didn’t have the same tutoring options as others. “But I hope they do truly support us and change the protocol.”

Schools across California received state and federal funding this year meant to be used toward academic recovery. The $54 million the district initially marked for tutoring and small group instruction was not spent, according to nonprofit advocacy group Innovate Public Schools, which works with parents in the district. A budget presentation from March indicates LAUSD adjusted that original amount downward to $24 million.

Some of the Covid-19 funds — $395 million with more expected next year — were in the form of Expanded Learning Opportunities grant funding. The district has spent 41% of that funding on recovery support.

Though LAUSD would not comment on whether it had spent the money allocated for tutoring, the district said the money categorized under tutoring only represents a small portion of the money set aside for it. Money has also been dedicated toward tutoring from the Student Equity Needs Index category, Extended Learning Opportunities grant and other sources, according to the district. That money was not included under tutoring to avoid double counting dollars.

“State and federal funding allows the expansion of tutoring programs and small-group instruction during the traditional school year and summer school,” the district wrote in a statement. “This is a part of a larger strategy to accelerate learning for students. Los Angeles Unified is committed to ensuring these one-time funds are invested into programming that is impactful and measurable.”

It is unclear how much money LAUSD spent on tutoring during this school year. However, the district did launch contracts with tutoring companies BookNook and Springboard Collaborative to provide tutoring to elementary students outside the allocated $24 million. It also helped launch Step Up Tutoring in January 2021 for similar age groups. Those collaborations have reached more than 7,500 students across the district this year.

But families are looking for more. An increase in tutoring is something Innovate Public Schools as well as several parent committees within the district are pushing for, especially as LAUSD plans to dedicate more money to it next year. The proposed budget indicates the district will spend an additional $4 million as well as dedicate money from the $822 million in Expanded Learning Opportunities Program funding that will be available for after-school and summer programming for elementary school students.

Innovate Public Schools said it’s happy to see more money go toward tutoring but emphasized that there needs to be a clear plan as to how the district will use that money, saying the large carryover in money allocated for tutoring this year points to implementation issues. The organization is pushing for a clearer definition of tutoring and a data-driven approach.

Hannah Gravette, regional vice president of Innovate Public Schools Los Angeles, said inconsistency has been one of the biggest issues. While some schools rely on the district’s partners, others have leaned on teachers to provide tutoring or relied on other online district offerings meant to aid with homework or provide asynchronous guidance, meaning quality differs, she said. That’s why Innovate Public Schools, alongside southeast L.A. parents, is advocating for a more centralized approach to tutoring and clearer monitoring of results.

“Some families have said, ‘Oh, my principal has a tutoring program and it’s great, so call your principal.’ And then the parents call other principals and they’re like, ‘No, we don’t have anything like that,’” Gravette said. “The district did make resources available, but again, it’s all on the principals.”

Along with Innovate Public Schools, data is something board member Nick Melvoin is also pushing for since the varying approaches have made it difficult to compare and measure success at the schools. He’s been advocating for a more centralized data tracking system as LAUSD looks to next year.

“I want to give schools that flexibility, but I also then want to make sure that kids in most schools are getting served adequately, and if not, have that course-corrected,” Melvoin said. “This is true with tutoring, it’s also true with regular curriculum, with after-school programs or offerings.”

For those like Jacobo Lopez, school support has helped immensely. Because her daughter’s elementary school is one of the more than 30 schools that’s partnered with Step Up Tutoring, she was able to access support in reading throughout the school year through its sessions — something her son was also able to take advantage of briefly when it first launched in spring 2021, before he moved on to middle school.

“Things have gotten a lot better,” Jacobo Lopez said in Spanish. “They’re barely recuperating, but it’s a slow process — getting used to it and improving.”

Those like Jurado’s first grade daughter have been able to rely on tutoring from their teachers. Along with a group of four other classmates, Jurado’s daughter was able to review reading, writing and math. The after-school support was a resource Jurado hadn’t considered signing her up for initially because she didn’t consider her daughter behind. The daughter was referred for the tutoring, and Jurado figured it was an extra resource that wouldn’t hurt.

But for some like Sanchez, that level of support feels like wishful thinking. Sanchez wants her son to have access to resources that go beyond the homework help offered to him at school. She wants support in pinpointing strategies to improve the areas he struggles with.

“Imagine a teacher trained or capable of individualized tutoring — it’d be the best that we could get,” she said in Spanish. “It’s a dream and I hope to reach it, even if it’s not in time for my son.”

That’s something that was also echoed by Judith Larson and Aida Vega, who both shared their families’ experiences at a southeast L.A. event earlier in June advocating for more widespread tutoring across the district. Neither Larson nor Vega, whose children attend middle and high school respectively, were happy with the options present at their children’s Southeast L.A. schools. The frustration actually led Vega to take on a second job to pay for private tutoring for her daughter, whose dream is to attend UCLA.

“We want a better future for our children,” Vega said at the event. “We care about their education because they’re the future of this great nation, and they deserve better. They will be our leaders, our professionals and future citizens in this society.”

Chief Academic Officer Alison Yoshimoto-Towery said the district remains committed to providing tutoring both outside of school and throughout the school day as part of a larger system of support. The district has provided generic tutoring as well as tutoring for a small student-teacher ratio and high frequency.

“It’s not something that happens in isolation,” Yoshimoto-Towery said. “It’s something that builds on top of, supplements their high quality, first good instruction.”

Aside from its locally designed tutoring programs, LAUSD has also focused on action through Title I intervention programs as well as Primary Promise, which guides students who need extra support in literacy and math. The program has seen considerable progress among students this year but has lagged in staffing. As of March, 29% of literacy teacher positions remained vacant as well as 54% of math teacher positions.

For now, some residents in Huntington Park and South Gate have turned to their cities to find the academic support they’ve been pushing for: small group high-dosage tutoring. The two cities have allocated a combined $226,600 to a pilot program that launches this summer. Each city will enroll 30 students for a six-week program beginning in June, which will grow to 12 weeks with an additional 60 students in Huntington Park and 90 in South Gate once school resumes. The program will be staffed by tutors from Southeast Community Foundation.

Parents welcomed the city support earlier in June holding white and neon green signs conveying a mix of city pride and district frustration as officials from both Huntington Park and South Gate announced their commitment to their school-age residents at Huntington Park City Hall.

“That’s what it takes — a village to raise our children,” said South Gate Mayor Al Rios Wednesday at the event. “That’s what today is about: this investment where everybody — the community — is coming together to make that change and to get other partners like L.A. Unified and the county and other entities to come forward and help our kids.”

Gravette said she hopes the pilot program will serve as an example to the district of what parents are looking for. She, along with city officials, hopes for future potential for the community to partner with LAUSD to better serve the students. There are at least five tutoring providers in southeast L.A. ready to support the district, if they reach out, Gravette said, who applauded LAUSD’s partnerships with other outside organizations.

“If LAUSD needs to start somewhere, they need to start here,” she said. “This is where there’s the most need. And then also, because we know that structurally, it’s just always left behind, because it’s not the City of L.A.”

On the district’s end, Yoshimoto-Towery said LAUSD is reviewing the efficacy of its current tutoring programs and evaluating their uniformity and coherence going into next year.

“We not only need to continue to provide the tutoring, but that can’t be the only focus of the district,” she said. “We also have to improve student outcomes as a result of that first good instruction that students are getting in the classroom, so fewer students actually need tutoring in the long run.”