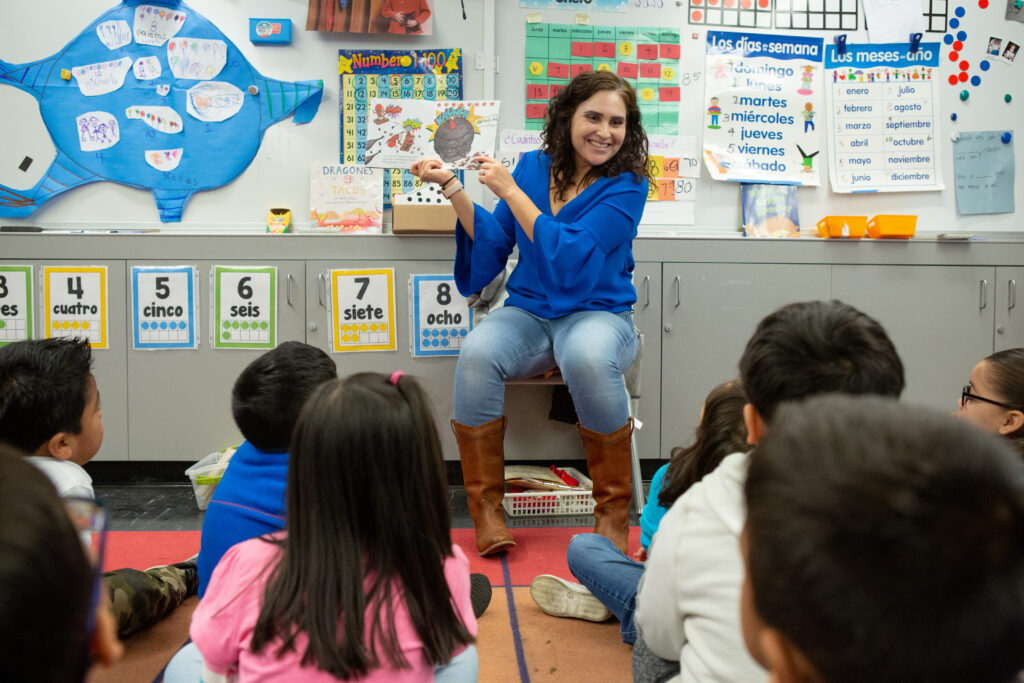 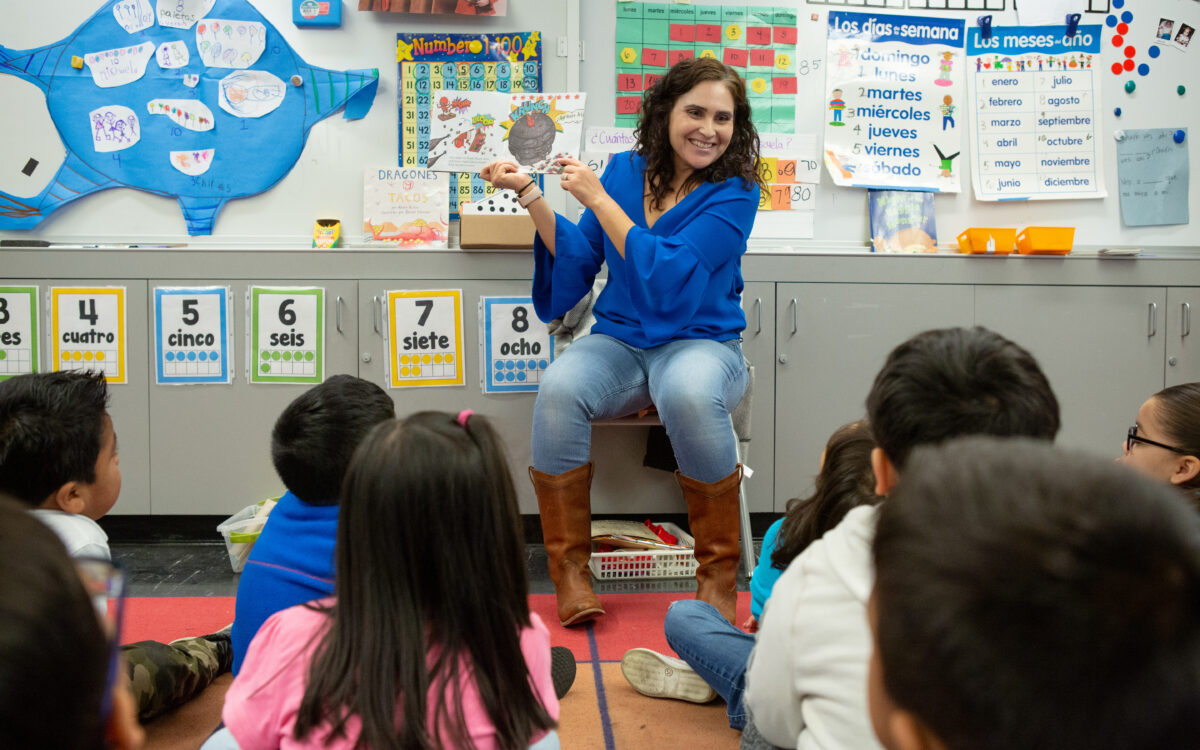 After years of prioritizing English-only classes for students who spoke other languages at home, California is now pushing to expand bilingual programs for all students. But the state has a huge hurdle: It needs more bilingual teachers.

In part, the low number of bilingual teachers is a lingering legacy of Proposition 227, which voters passed in 1998 and then repealed in 2016. Proposition 227 required English learners to be taught in English-only classrooms unless their parents signed a waiver.

Today, only 42 of 80 teacher preparation programs in the state offer bilingual authorizations – a specialization in addition to the general teaching credential. The number of teachers receiving bilingual authorizations in California has grown some each year since 2016, but districts still struggle to find bilingual teachers, and demand is growing as more schools plan to open more bilingual programs.

“We are looking for teachers in the wrong places. We’re not going to find the number of teachers that we need at universities. We need to find these folks in our communities,” said Guillermo Castillo, director of Future Educator Support.

A new bill, Assembly Bill 1701, would fund a program for California State University campuses to recruit and retain college professors for bilingual authorization programs. The CSU system issues about 45% of teaching credentials. About 49% of credentials are issued by private colleges. The University of California system provides 6%. Another bill, Assembly Bill 2465, would pay for preparing and credentialing 500 new bilingual teachers.

Some experts say the state needs not only to expand the number of programs that offer bilingual teaching authorizations, but also to encourage current teachers who teach only in English to be trained in bilingual education and to recruit new potential teachers.

“We are looking for teachers in the wrong places. We’re not going to find the number of teachers that we need at universities. We need to find these folks in our communities,” said Guillermo Castillo, director of Future Educator Support, a program of the Butte County Office of Education.

Future Educator Support helps people who already work in education, like bus drivers, cafeteria workers and teacher’s aides to get their teaching credential and, for those who are bilingual, their bilingual authorization, with funding from the California Classified School Employee Teacher Credentialing Program.

Ed’d Luna Bhagwandeen was working as a school library media specialist and thought their dream of becoming a teacher was far out of reach, when they heard of this program. After college, Bhagwandeen was discouraged by the credentialing process.

“When I tried to do it on my own, there were all these different tests, and hours that you had to meet. I was like, ‘How do people do this when they’re working to survive?’ It became further and further away from being feasible,” Bhagwandeen said.

With the help of Future Educator Support, Bhagwandeen was able to take the classes and tests needed to get a teaching credential with a bilingual authorization from San Diego State University and is now working as a teacher on special assignment at Centralia Elementary School District, teaching children Spanish and helping organize a dual-language program that will open next year.

Bhagwandeen says the impact of bilingual education is clear. Parents say that their children now attempt to speak to their grandparents when they hadn’t before. Students say, “This class has helped me. I know I’m bilingual now.” To Bhagwandeen, who has family roots in Mexico and whose grandfather was prohibited from speaking Spanish at school when growing up, this is particularly significant.

“At a time when we’re so isolated during Covid, them finding an appreciation of themselves and feeling good about themselves is super important,” Bhagwandeen said. “I know that I’m doing the kind of work I want to be doing.”

Offering personalized support for getting through all the requirements for a bilingual authorization is crucial, said Future Educator Support administrator Holly Harding.

“The thing they report so often is that our program feels like familia. They can reach out to us at any time of day. We meet on weekends, we meet at night, we meet early in the morning. We individualize our support to them, and they love that,” Harding said. “They feel they can be vulnerable with us. Many are English learners themselves. We help them to overcome language barriers, financial barriers, just self-doubt, no matter what it is that they are feeling is a barrier to getting their credential.”

Many potential bilingual teachers have not even considered the possibility, said Guadalupe Díaz-Lara, who teaches child and adolescent studies at CSU Fullerton. She said many of her students want to be teachers, and the vast majority are bilingual in Spanish and English, but they are not aware of the possibility of getting a bilingual credential or working in bilingual education. Díaz-Lara believes that is partly because they attended English-only programs themselves.

“They acknowledge the impact of having those experiences in school where their home language wasn’t valued,” Díaz-Lara said. “They are definitely passionate about working with minority families. A lot of them want to go back to their communities and give back to their communities, but they don’t know that bilingual education is an option for them.”

This was the case for Alejandra Silva, another graduate of the Future Educator Support program, who received her credential from San Diego State and now teaches in a dual-language program at Escondido Union School District. She was finishing her bachelor’s degree and working as a school speech therapist aide when she found out about the classified employee grant program.

“We need to make teaching overall a desirable, important and valuable career. We need to do more promotion of that in K-12 and in the public sector,” Lavadenz said. “We need a tuneup.”

In addition, many teachers who currently teach in English are in fact bilingual and could receive a bilingual authorization with the right support.

The  Bilingual Teacher Professional Development Program, which began in 2018 and ended in 2021, helped prepare about 350 teachers for bilingual credentials, according to the California Department of Education. After the program ended, some school districts, particularly smaller ones, are struggling to prepare more teachers.

“We’re still being asked by our districts, especially those that are building up their bilingual programs, ‘Can you help us?’” said Martha Martinez, director of research and evaluation at SEAL, a nonprofit organization that provides training and assistance to help elementary schools and preschools across the state implement strong bilingual programs.

Some school districts have partnered with colleges themselves to set up residency programs where students work in classrooms as student teachers for a full year, while they get their credential. One such district is Oak Grove Unified, in San Jose, which has partnered with San Jose State University. Both student-teachers and the teachers working with them take classes with SEAL on best practices for bilingual education.