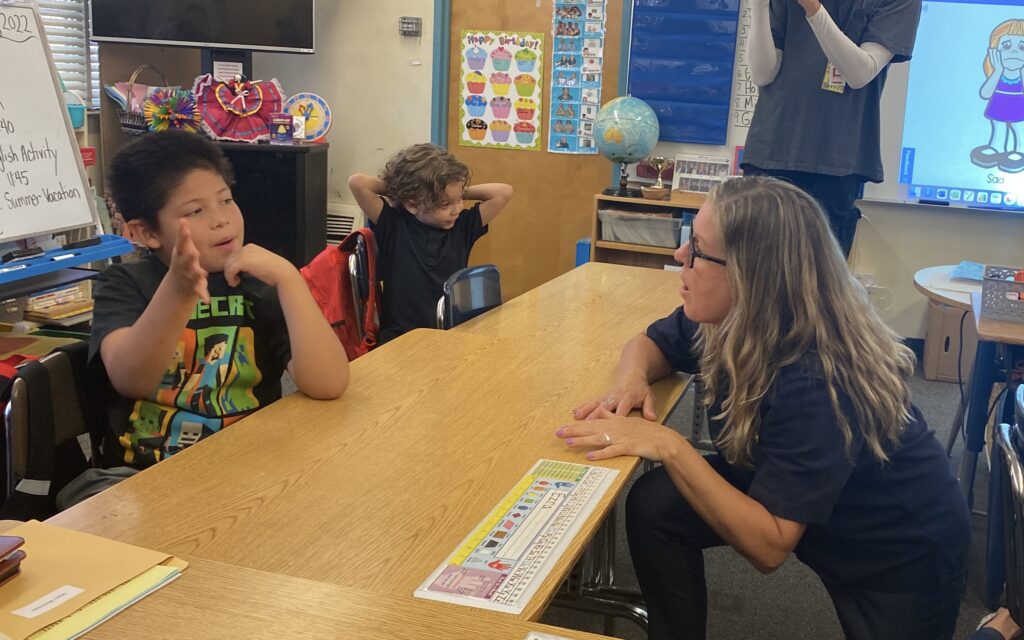 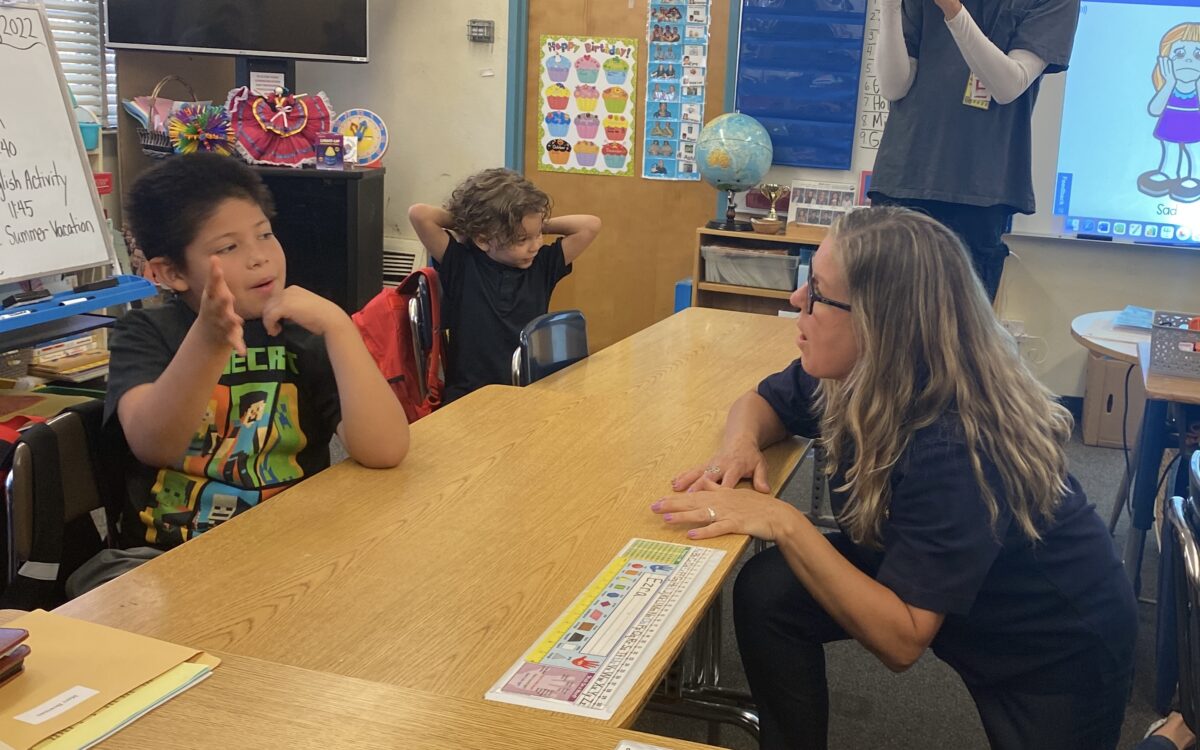 KATE SEQUEIRA/EDSOURCE
The Marlton School for the deaf and hard of hearing is one of the 296 schools hosting students during the district's two additional learning days.

KATE SEQUEIRA/EDSOURCE
The Marlton School for the deaf and hard of hearing is one of the 296 schools hosting students during the district's two additional learning days.

In one of its largest efforts to get students back on track academically, Los Angeles Unified is offering students an optional two additional days of learning and catch-up over winter break next week. But teachers and families say they’re uncertain about how these days will unfold and whether the plan will really help students.

Some educators and families argue that the extra days of instruction won’t do much to catch students up academically, especially since some logistics remain confusing to them. Others say they hope to see results from the new intervention designed to reverse some of the learning loss students suffered during the pandemic and the switch to online classes.

Educators received some training from the district, but preparation has varied across schools, according to participants. LAUSD released a sample schedule last week focusing on literacy, math, enrichment and academic support but how those blocks are used will depend partially on the teachers. The district has shared optional lesson plans, but teachers are also welcome to use their own.

Adding to the complications, many students will attend at schools other than their usual home campuses and will be assigned to teachers they never met before. The effort is voluntary for both students and teachers, with relatively low participation rates among students so far.

“I’ve been teaching for 29 years, and I have kids in the district. I’ve just really never seen anything like this,” said transitional kindergarten teacher Marissa MacDonald Mateo, who will be participating in the additional days next week.

Despite working next week, she’s chosen not to sign up her own daughter because of the uncertainty that still clouds next week. “If you expect teachers to do an excellent job, you don’t give them one week to prepare,” she said. But she is hoping for the best.

The extra two days of acceleration, which will take place Monday and Tuesday, have been controversial since their announcement. Initial plans to host these optional days during the school year as opposed to during vacation days received backlash after the teachers union filed a complaint because it was not consulted. That led to some changes, including the dates of the intervention.

As of Wednesday, nearly 70,000 students — equivalent to over a seventh of students enrolled in the district — have signed up to attend the first two of four acceleration days spread across winter and spring breaks. The district will open 296 of its more than 1,000 campuses to host those students. The district is relying on 8,00 certificated school site employees and 6,000 classified employees. Around 650 substitutes will be working these days.

Employees who participate will receive additional compensation for working next week.

The need for the extra days is clear, the district says. The district sees these days as a way for students to reinforce skills and improve their grades for the semester.

State testing last school year demonstrated a drop across students in both English and math in comparison to 2019 scores, with the largest drop across both subjects in 11th grade. The acceleration days are one of several post-pandemic intervention efforts, including a push to expand summer school as well as tutoring, though families say access to tutoring has varied.

“We have an opportunity and a professional and moral responsibility to do all that we can to assist our students,” Superintendent Alberto Carvalho said at last week’s board presentation on the acceleration days. “This is one of many strategies that we are employing, one that we cannot squander.”

He said the district will analyze the impact of these two days next week to possibly improve things for the remaining two optional days in April.

The district’s initial plan was expected to cost $123 million, including additional professional development days for teachers offered at the beginning of the school year. But because of the changes, district officials say the cost has gone down, though it’s not clear by how much.

There’s been information overload for administrators over the last few weeks, according to Associated Administrators of Los Angeles president Nery Paiz, as principals have set up plans. He said principals’ main concern is whether campuses will have the appropriate amount of staff, especially if attendance and needs fluctuate last minute. The staff will include teachers as well as special education aides, cafeteria workers and others who have signed up to participate.

“It’s a new concept, and there’s so many pieces that are not within their control,” Paiz said. “It’s difficult to be accountable for something that is not really within your grasp. They’re hoping that they’re going to do the best they can.”

LAUSD’s official sign up deadline was last week, but families have continued to register their students this week, and the district expects to receive unregistered students on both days. That’s something that’s also worried MacDonald Mateo, who said she still doesn’t know which or how many students she’ll have in her classroom at Noble Avenue Elementary School in North Hills. The school is one of the campuses hosting the acceleration days, and it’s expecting students from a nearby school as well.

District officials said schools would be getting their rosters at the beginning of this week.

MacDonald Mateo said she is relieved to have received some clarity on how the days will go after squeezing in a Zoom training while sitting in the waiting room of her doctor’s office Tuesday. Elementary school teachers were sent packages with resources to prepare math and literacy lessons as well as enrichment activities. They have the option of using the provided lessons or creating their own. MacDonald Mateo isn’t sure which she’ll do yet.

At Clinton Middle School in Historic South-Central, resource teacher Kirk Downey is feeling a bit more confident about how the acceleration days will play out now that teachers have received additional information. His school is one of the campuses hosting students. Though Downey initially signed up to participate, he isn’t planning to any longer after learning that he was assigned to a class that already had three other staff members. However, he’s still looking forward to the results of the experimental day.

“This turned out to be what I was hoping it might become — that’s what it seems like,” Downey said after attending the training. “The only thing that will tell will be the experience of it.” Still, some campuses and teachers may find this “daunting and frustrating,” he added.

At both the middle and high school levels, the district has extended grading periods to allow students to turn in assignments and improve their grades for the semester. Teachers are expecting students to have assignments waiting for them in the classroom management platform Schoology. Their teachers can then adjust their grades when they come back from break Jan. 9.

Special education assistant Danielle Murray is worried there won’t be enough support for special education students. At Maclay Middle School in Pacoima, there aren’t students with severe disabilities, but she’s unsure whether to expect some from other schools who do have them. With the days so close, that makes her feel unprepared, she said.

Murray has two sons who are in special day classes, but she decided not to sign them up since it takes them a bit to adjust to new environments and that the days may be ineffective for them. She worries about the same thing for other special education students.

“I just feel like some of the kids are gonna get lost in the shuffle,” Murray said. “Other kids that are more independent just need somebody to say, come on, let’s do this, and it’ll be great for them. But other than that, I really just think we’re just gonna be, I hate saying it, babysitting.”