Students fear losing aid as grades are withheld during strike 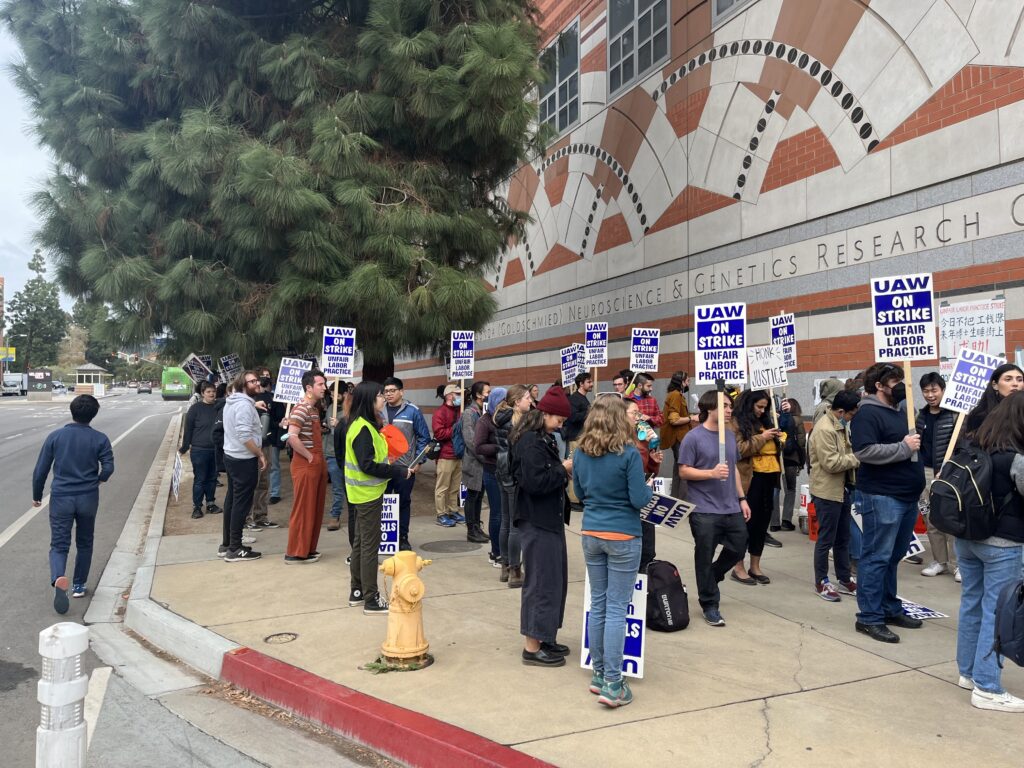 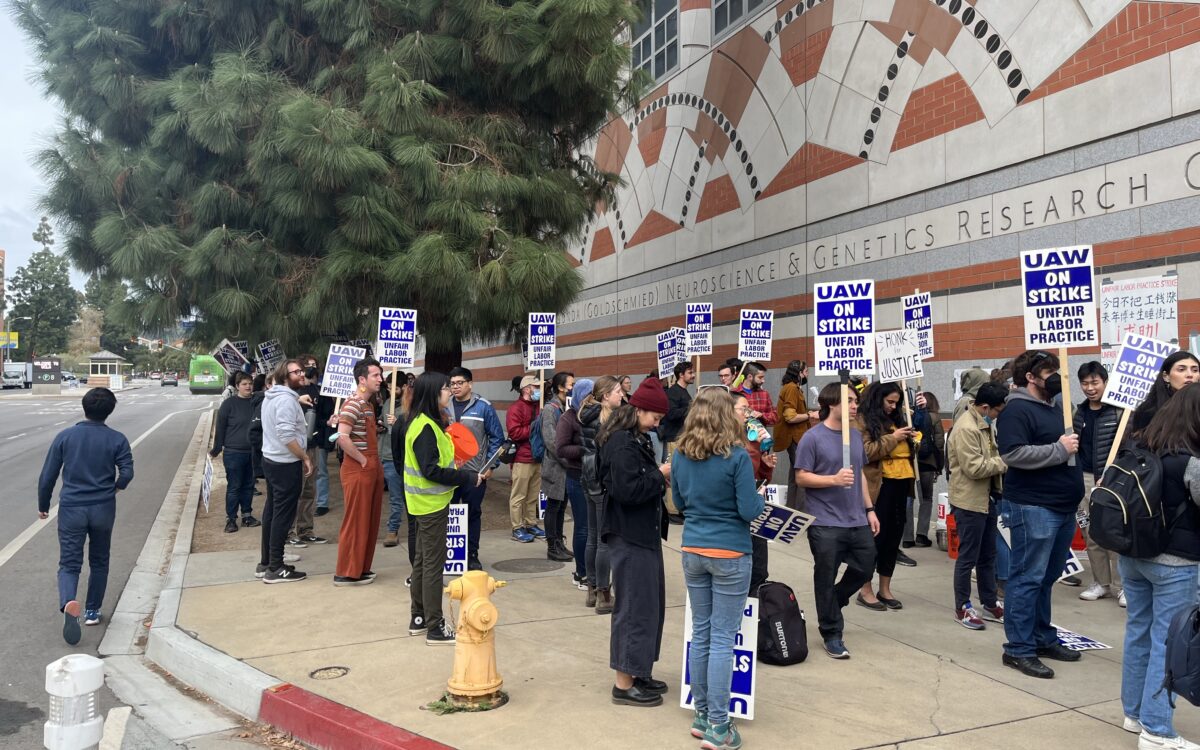 Michael Burke/EdSource
Graduate student workers rally on UCLA's campus as they seek better wages to keep up with the cost of living in California. Their strike is now in its fourth week.

Michael Burke/EdSource
Graduate student workers rally on UCLA's campus as they seek better wages to keep up with the cost of living in California. Their strike is now in its fourth week.

The strike by University California academic workers may soon hit some undergraduates in a vulnerable spot: their grades.

With the strike in its fourth week and no end in sight, faculty across the system are now planning to withhold tens of thousands of grades this fall in solidarity with those workers. That could have significant and dire implications for some undergraduates, such as those who need a certain grade point average to maintain federal financial aid and students planning to graduate this fall or soon apply to graduate school.

Allie Jones, a senior at UC Santa Barbara double majoring in English and philosophy, relies on her grade point average to keep her financial aid. She is confident she’ll keep her aid in the long run, but she’s yet to receive clear guidance and is concerned it could be temporarily withheld. That’s problematic because she relies on that federal aid to pay for her off-campus housing.

“For someone like me, who lives off campus, withheld aid could literally mean losing my housing,” said Jones. She blames UC leadership for her predicament and says the striking workers have reasonable demands.

UC officials say very few students — maybe less than 1% of its 230,000 undergraduates — might have aid withheld if grades aren’t submitted on time and that the university is taking steps to mitigate those possible impacts.

As of Tuesday, UC faculty have committed to withholding more than 30,000 grades until the strike ends. That number is based on self-reported information that faculty organizers have collected using an online form.

Teaching assistants as well as student researchers are striking for better wages and remain far apart from UC officials in efforts to reach a settlement. The strike also involves postdocs and academic researchers, but UC has reached tentative agreements with them, although they have not returned to work out of solidarity with the workers who have yet to settle.

The pledge from faculty to withhold grades comes during current finals week at UC’s seven undergraduate campuses that are on the quarter calendar. The other two campuses, Berkeley and Merced, hold finals next week on the semester calendar. Some professors have canceled their final exams altogether, while others are holding the exams but won’t grade them, post them for students or report them to their campus registrar.

Several campuses have already extended their deadlines for grades until later this month or January.

UC leadership has urged faculty to submit grades on time, even threatening to withhold pay if they don’t. In a recent letter to UC administrators, UC Provost Michael Brown wrote that faculty have the “responsibility to maintain course and curricular requirements,” including the “timely awarding and submission of grades.” He added that UC could “withhold their compensation” for faculty who “choose to withhold their labor during the strike.”

Withholding grades could also mean federal financial aid is withheld for students who need to make satisfactory academic progress. That includes student who receive awards such as Pell Grants, federal loans or federal work-study. Graduations may also be delayed for students planning to complete their degree this fall.

When it comes to financial aid disbursement, UC says fewer than 2,300 or so of its roughly 230,000 undergraduate students would be impacted. UC also plans to help those students in the event aid is withheld, including by offering UC-administered aid when a student can’t get federal aid.

“The vast majority of students will be unaffected by a potential delay in grades. A very small number of students who did not meet federal Satisfactory Academic Progress in a prior term and were counting on fall grades to clear their record may be impacted. At most this group represents fewer than 1 percent of UC undergraduates,” UC spokesman Ryan King said in a statement to EdSource.

Faculty who are withholding grades say they are simply exercising their legally protected right to not pick up work responsibilities of striking employees, since grading is often the job of teaching assistants. They also say it’s the university’s responsibility to ensure that students aren’t negatively impacted by the lack of grades.

“This is a dispute between the university and the union representing graduate student workers. And this actually has little to do with us as individual faculty,” said Kevan Aguilar, an assistant professor of history at UC Irvine. Aguilar is one of the faculty who organized the pledge to withhold grades and this fall is teaching a class on the Mexican Revolution. Since grading in that class is done by the teaching assistant, grading won’t happen until after the strike is resolved.

Aguilar added that it’s up to university officials to resolve the situation by “listening to the union and their demands.”

Jones, the UC Santa Barbara student, agrees. She said she supports the striking workers and said financial aid is being threatened because UC negotiators “refuse to play ball.”

“Rent here is absolutely astronomical, and inflation is absurd across the entire state and country,” Jones said. “A livable wage should not be something that people have to beg for.”

Campus officials across the system have encouraged faculty who can’t submit grades this fall to leave grades blank, which will allow them time to add a grade in the future. At UC San Diego, for example, instructors have been notified that they will have one year to change grades that are submitted as blank grades this fall.

Some students won’t suffer immediate consequences if grades aren’t submitted on time this fall but remain frustrated with the situation. Soren Larsen, a senior at UC Santa Cruz studying computer science, is taking Principles of Computer Systems Design, an upper-division course in his major. The class, which is required for the Bachelor of Science in computer science, involves building a web server from scratch.

Larsen said he nailed the course’s first two assignments, but then the strike started and other meetings of the class were canceled. Since then, he’s had little contact with the professor and teaching assistants. The professor eventually communicated to Larsen and the students in the class that they would get to argue for the grade they deserve based on the work they did while the class was active.

Larsen is confident he can argue for a B-plus or A-minus but said he’s unsatisfied because there have been no classes or assignments since the strike started. He said he wishes he could’ve been evaluated “to the same strictness as someone who took the whole class” without disruptions.

“The grade I get in this course is always going to feel illegitimate, and it’s frustrating to me because I want a real grade,” he said. Larsen added that he’s especially frustrated because several of his classes in past terms were disrupted by the Covid-19 pandemic and now the strike is another interruption, making much of his experience at Santa Cruz feel inadequate.

Kareem Majeed, a senior in international development studies at UCLA, said he understands why many of his peers are unhappy with the disruptions brought by the strike. Majeed himself has felt the ramifications: All four of his classes have been completely canceled since the strike began. He’s not sure when he will receive grades, something he acknowledged is worrisome.

But Majeed supports the strike and said he wishes other undergraduate students could see “the bigger picture” and do the same.

“Many of my friends feel like it’s gone on for long enough, but that’s the point of the strike. We’re in a really key moment for labor. People are hurting. I hope they are able to get the cost of living adjustment,” Majeed said, referring to the striking workers’ push to get salaries that match the cost of living along with annual adjustments, one of their key demands.