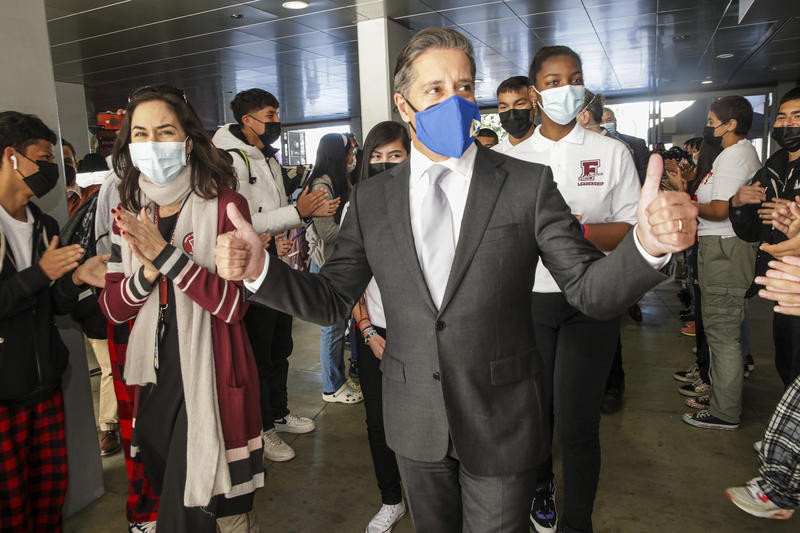 The plan will shape district priorities for the next four years

Los Angeles Unified will spend the next four years building an environment to prepare students for life beyond the classroom.

The district’s strategic plan, adopted unanimously alongside the budget Tuesday, will not only focus on providing support for the student through a focus on academic achievement and wellness, but also on creating an environment that will foster that success by equipping community, staff and district with the necessary information and tools to supply that foundation.

The plan is set around four specific goals defined by the board in June 2021: literacy, numeracy, college and career readiness, and wellness.

The plan’s adoption marks the end of Superintendent Alberto Carvalho’s first 100 days in charge of LAUSD, which he primarily spent learning about the district and its needs. His findings were compiled in a report released last week. He joined the district in February after 14 years at Miami-Dade County Public Schools marked with academic growth and an expansion of school choice. Now, he’s looking toward embarking on his first full school year in Los Angeles.

“By sharing this plan today, we are declaring a first but very important first step in creating alignments between our system, what we represent, what we value, how we prioritize it, the appropriations we approve and, ultimately, the goals we expect to achieve,” Carvalho said as he presented the strategic plan at Tuesday’s board meeting.

LAUSD is honing in on its effort to close gaps as the district continues to navigate the lasting impact of Covid-19 on learning, using the strategic plan to ensure alignment of goals across the district and its schools. The plan took in feedback from community members and organizations across the district through town halls, listening sessions and surveys.

But, as noted both by Carvalho and Chief Financial Officer David Hart, LAUSD must remain careful in its spending moving forward. The district is preparing for the near future when extra Covid-19 relief funding is no longer available, while also navigating continued declining enrollment, which is causing funding — calculated per student — to fall. Attendance has also taken a heavy hit since the pandemic. However, in light of that, the state will consider the average attendance of the last three years when calculating the 2022-23 school year funding.

“[We must] most importantly deliver on the promises and investments but also be guarded, cautious and proactive in addressing the long term liabilities facing our school system,” Carvalho said at a budget workshop in May.

LAUSD has prioritized recruitment to tackle declining enrollment in the strategic plan, with the goal of increasing the annual percentage of new students enrolled in the district to 16%. To aid in that, it also plans to create more targeted community-based initiatives to draw in students and develop tool kits for schools to recruit more effectively.

The district’s biggest goals revolve around building academic excellence and closing achievement gaps among students, which have only been exacerbated by the pandemic. Like in Miami, Carvalho is pushing to expand access to programs and learning pathways, something he’s been vocal about since arriving at LAUSD.

Through the strategic plan, the district aims to increase the number of students participating in programs involving the arts, STEAM and dual language as well as increase the number of students involved in thematic and choice learning options to at least 65%. The district will also focus on building more partnerships with community based organizations throughout Los Angeles to provide access to arts and extracurricular opportunities to students.

Part of LAUSD’s plans for the next four years considers how the district will provide an environment for achieving these goals. The district is taking a data-driven approach, with the goal of implementing quarterly budget reviews to provide the opportunity to pivot quickly if certain strategies appear to not work. LAUSD is also transitioning to a multiyear budgeting plan as it maps out its priorities for the coming years.

As LAUSD focuses on improving literacy and numeracy in particular, it will track such progress through assessments, focusing on increasing the proximity to proficiency of overall averages on the Smarter Balanced Assessments.

The district also aims to increase the percentage of high school students on track to graduate with a C or better in their A-G requirements from 42% to 70%, to expand access to college information and application support and to grow opportunities for career pathway explorations.

“We’re on the verge of social cohesion and coherence, it’s really exciting,” board member Nick Melvoin said, happy that the plan is charting a specific course toward its goals. “If we do execute this plan for the next four years, we will see a real acceleration in achievement.”

Looking to promote wellness, the district will track growth in socio-emotional learning and focus on increasing the number of students and staff accessing mental health support. LAUSD also plans to focus particularly on attendance by identifying root causes for students missing class, providing incentives to students to show up and further personalizing outreach.

Weeks of students voicing concerns at board meetings over the role of police in schools also led the school board discussion to turn to the district’s goals for safety. School police were not present on campus this year, which has caused those in support of and opposed to the arrangement to come forward at board meetings throughout the school year. Board members have mixed thoughts on the extent to which police are necessary on campus.

Students in advocacy group Students Deserve are pushing the district to defund the Los Angeles School Police Department completely and put that funding toward the Black Student Achievement Plan, which emerged after board members voted to decrease the department’s budget by a third two years ago and create the initiative. The initiative is intended to address disparities between Black students and their peers.

Carvalho emphasized that the district has been able to direct funding toward the Black Student Achievement Plan without having to take away more funding from the school police, saying that it wouldn’t make sense to do so without proper analysis and planning.

“We cannot close our eyes to, look away from, or simply say, let’s move away from everything we’ve done without having the solution for the day after,” he said.

The district is also planning to ramp up staff recruitment and focus on retention as it navigates a teacher shortage that has hit schools across the country. In an effort to combat the impact of the shortage, Carvalho redeployed non-classroom staff from across the district to vacant classrooms following spring break and assured the community positions would be filled coming August.

The strategic plan aims to ensure that vacancies at high and highest need schools — which are dealing with the most vacancies — won’t exceed 6%. It also prioritizes expanding professional development for current teachers as well as increased training and support for new hires.

LAUSD also plans to increase engagement with parents and the community by establishing a family academy to help families build skills and obtain necessary information — something that initially emerged as part of Carvalho’s 100-day plan. LAUSD is also planning on expanding the number of school volunteers and creating more advisory councils comprising parents, staff and students as well as further growing its relationships with community partners and relevant governmental agencies.

Looking at the LAUSD’s priorities for the next four years, board member Kelly Gonez cautioned that the district further narrow its strategies as it implements the plan, noting that trying to do everything at once might make it difficult to succeed. She referenced how last year’s promise to provide psychiatric social workers at all school sites wasn’t met in part because hiring goals were spread across the board.

“Even as we commit to pursuing everything, we have to think about what we need to prioritize first,” she said. “​​We can’t do everything at once and trying to do so will mean that we don’t do anything well.”

Moving forward, LAUSD plans to consistently monitor results and continue to engage with the community to ensure its priorities are on track. The district will also make sure all parts of its system — including budgets and reporting structures — are in alignment with the strategic plan.