Above: Sixth graders work together on a science project.

Across California, low-income students are more likely to have unqualified teachers, but what has been a longstanding problem of inequity between rich and poor schools may be showing progress.

Among all schools statewide, the rate for unqualified teachers is lowest in the wealthiest schools and higher in the rest.  There are 40% more teachers in poor schools who lack the required qualifications than in the richest schools, an EdSource analysis found.

But the analysis of newly released state data also shows there may be reason for optimism.

The state’s largest school districts showed an equitable distribution of qualified teachers across low- and higher-income schools. At the five largest districts in the state, there is little to no gap in teacher qualifications between the wealthiest and poorest schools.

While inequalities exist, the disparities among schools and districts in staffing classes with fully prepared teachers don’t appear as stark as 20 years ago, said John Affeldt, managing partner of Public Advocates, a public interest law firm that has tracked inequities in teacher qualifications in California for two decades.

“I think districts are aware and may be doing a better job, but have not erased the disparities,” Affeldt said. “It’s a statewide problem that needs to be addressed.”

In recent years a pervasive teacher shortage has resulted in school districts hiring more teachers on emergency permits or waivers to teach classes they are not officially qualified to teach, exacerbating efforts to ensure every student has a fully qualified teacher.

The problem has been especially dire in middle and high schools, which have had a particularly difficult time finding teachers with the appropriate credentials to teach science, math and world languages. Special education teachers are in demand at all grade levels.

Nearly half of Oakland teachers not qualified

Among the larger school districts, Oakland has the lowest percentage — 57% — of teachers assigned to classes they are credentialed to teach. The district also shows the highest disparity between rich and poor schools among the largest districts statewide and among all districts in the Bay Area. 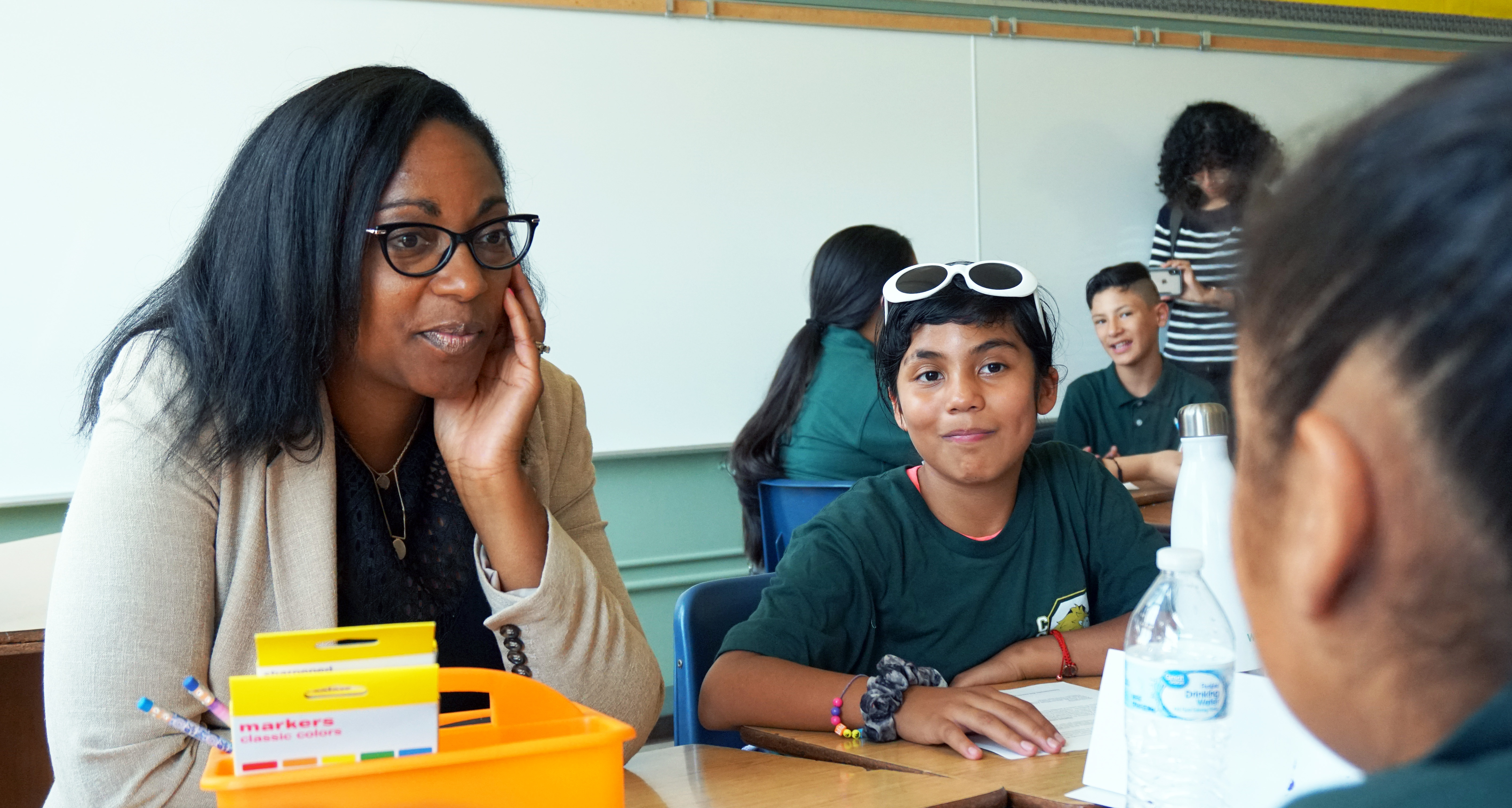 The reasons for the constant churn and difficulty finding teachers in Oakland with needed credentials varies, depending on whom you ask. The cost of housing in Oakland and the Bay Area is among the highest in the state, and Oakland’s salary scale, as of 2020-21, was among the lowest in Alameda County, from $50,600 for new teachers to $95,000 for the highest-paid veterans.

Why do low-income schools have more uncredentialed teachers?

EdSource · Why do low-income schools have more uncredentialed teachers?

Indeed, salary disparities among districts play a role in attracting teachers to some districts and away from others.

Marisol Leyba, a six-year teacher in the Alum Rock Union School District in San Jose, says experience and training matter. In first grade last year, which she taught, two of the four teachers lacked a credential; one had an emergency permit as a substitute teacher; the other was an aide who took over from a teacher who quit early in the year.

“They don’t know how to teach reading; they had no classroom management. The paraeducator was overwhelmed,” Leyba said. “We provided support, which helped. I don’t feel right for the kids. They deserved a person with experience and training.”

In Alum Rock, a 9,200-student TK-8 district in East San Jose made up mostly of low-income students, 78% of classes are taught by teachers with the appropriate credentials, the lowest percentage in Santa Clara County except for a one-school district in San Jose.

“Teaching excellence, like any resource in education, should go where it is needed the most,” said Jana Luft of The Education Trust-West, a non-profit education advocacy organization. “We should provide rigorous, high-qualified instructors to all students, especially students who have been shut out of opportunity.”

Los Angeles Unified is one of a handful of school districts with both wealthy and poorer school communities that has managed to distribute teachers across campuses equitably. In some LAUSD schools, all the students qualify for free and reduced-price meals, while in others as few as 6% of the students are eligible for the meals. But an average of 83.8% of the teachers at schools that served lower-income students were qualified to teach the courses they teach, compared with 82.5% at schools that served the district’s highest-income students in 2020-21.

Behind EdSource’s analysis of teacher credentials

Our statewide totals include all 8,784 non-charter schools that were included in teacher assignment data provided by the California Department of Education. Statewide socioeconomic analysis was done by matching 8,746 of those schools with their percentage of students eligible for free and reduced-price meals in the 2020-21 school year, the same as the teacher assignment data, and dividing that into quartiles. The remaining 38 schools had no free and reduced-price meals (FRPM) data available.

Analysis of individual districts followed a similar methodology – the list of schools was merged with FRPM data from the appropriate school year – but rather than quartiles, each district’s schools were divided into thirds. While quartiles would have worked for the largest districts, most had few enough schools that dividing them into quarters would allow outliers to shift the collective total by too much. Accordingly, thirds were used in all instances for consistency.

Deputy chief human resources officer Frank Serrato said the district has been focused on ending these types of inequities for several years. The district’s strategy will eventually improve the overall percentage of teachers — 83% — in the district who are credentialed to teach the courses they are assigned to teach.

Shortly after taking the reins of LAUSD last spring, Superintendent Alberto M. Carvalho filled 420 empty teaching positions with credentialed staff including administrators, coaches and teachers on special assignments who had been working outside the classroom.

The district focused on its most “fragile schools” when redeploying the experienced teachers, Serrato said.

The district has filled 1,091 teacher vacancies for the coming school year but still needed more than 984 teachers, librarians and counselors as of July 27. If there still aren’t enough teachers at the beginning of the school year, the district will redeploy credentialed staff on campuses until replacement teachers can be hired.

“We are such a large district, we can remobilize efforts to ensure our students have the appropriate teacher in place,” Serrato said.

To help recruit new teachers, the district is offering a $5,000 incentive to credentialed teachers who agree to teach at a “high-needs” school, according to the district website.

“We want to be the district of choice, for not just students, but for staff,” he said.

La Mesa-Spring Valley School District, in San Diego County, has the same goal and already has had much success. The district is a 12-minute drive from the beach, but Meg Jacobsen, assistant superintendent of human resources, says it is the culture of collaboration between administrators and teachers, and partnerships with local universities that brings teachers to the district.

A teacher residency program with San Diego State University and a program to prepare classified staff to earn a teaching credential through Point Loma Nazarene University brings about 40 new teachers into the district each year.

The district also has been successful at retaining teachers, with 80% of its staff working there for more than 20 years. The result has been fewer underprepared teachers, allowing the district to have teachers with the appropriate credentials teaching 92% of its classes in its lower-income schools and 91% of the classes in its higher-income schools.

“We are the Goldilocks of school districts,” Jacobsen said . “We aren’t so big that you get lost in the shuffle.”

Although rural school districts historically have had the hardest time recruiting and retaining teachers, Buttonwillow Union, a rural one-school district in Kern County, has found a way to attract new teachers even though its salaries are among the lowest in the county, and it has to compete with 47 other county districts.

But last year 93.8% of the district’s classes were taught by teachers with the appropriate credentials. Superintendent Stuart Packard says the district is able to attract and retain qualified teachers on what he calls “intangibles.” The district invests in programs and support that make a teacher’s job easier — and are good for students.

For example, there’s a teacher who is dedicated to physical education, which takes an important duty off teachers’ plates and gives them more time for preparation. Recognizing the effect the pandemic has had on young students, this year’s second-grade class had just 11 students.

“We want to treat it more like an intervention class,” Packard said. “We had the funding to be able to do that.”

Many teachers have long commutes, including some who come from Bakersfield. When gas prices soared, the district offered a gas stipend. To attract teachers, Buttonwillow Union offers 10 years of service credit to teachers from other districts. 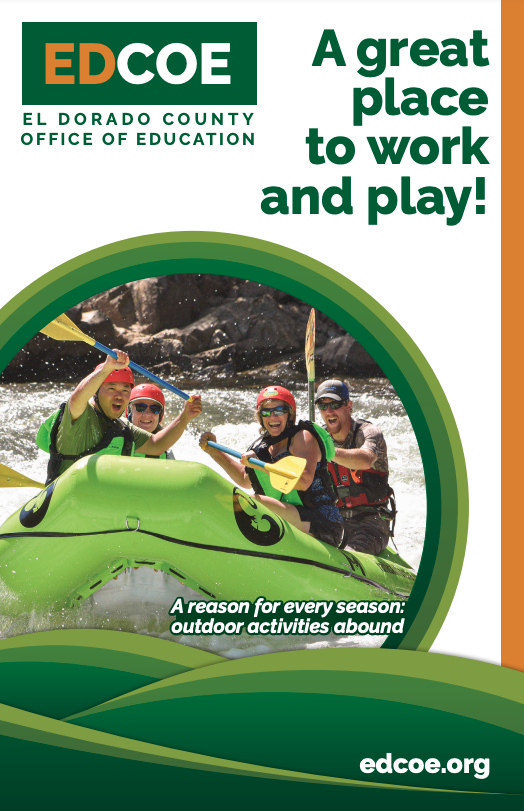 A glossy eight-page brochure from the El Dorado County Office of Education is helping to attract teachers to the 15 school districts in the semi-rural county just east of Sacramento. The brochure features smiling people whitewater rafting, enjoying water sports and skiing, and proclaims the county “A great place to work and play!”

“We have intentionally worked to recruit people who want to live here because of the lifestyle,” said Amy Andersen, executive director of human resources for the county office.

As a result, all but one district in the county falls below the state average of 83% of classes being taught by qualified teachers.

What can be done to ensure all students have a qualified teacher?

But there is still more that can be done, said Luft, of The Education Trust-West. To ensure California schools have enough qualified teachers in the classroom it should cover the full cost of teacher preparation and credentialing, as well as student teaching, she said. Strategies to retain teachers could include increasing salaries and assisting with housing, transportation and child care costs, she said.

“I think it is time for the state to take bold, thoughtful action and have a concrete plan for how we are going to recruit and retain a well-prepared education workforce for the long term,” she said.

On the map, click on each district for a breakdown of all categories:

The district is hoping a "grow your own" approach to recruiting teaching candidates from the community will pay dividends OUSD. But living costs are high, and nearby districts can compete with offer higher salaries.