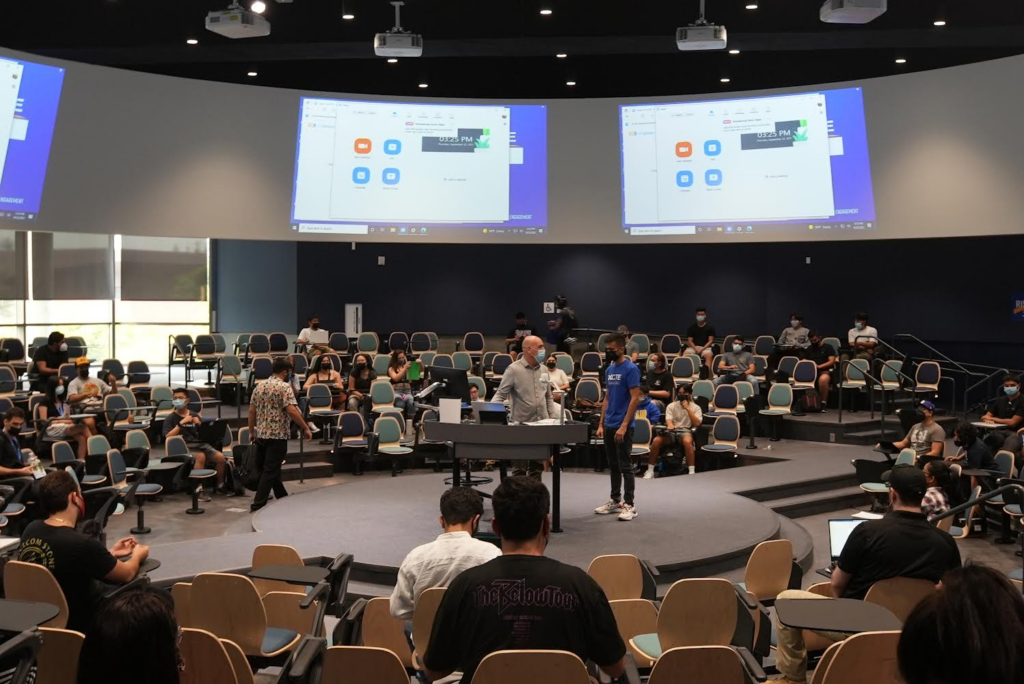 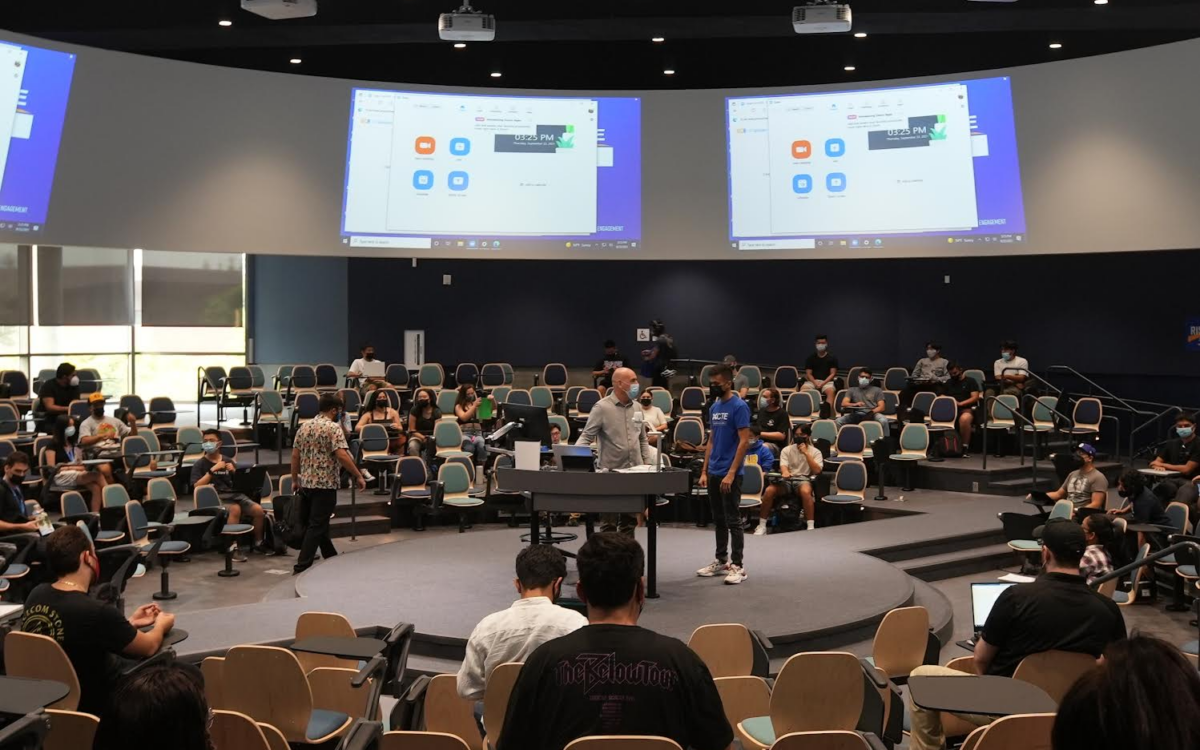 In an Intro to Machine Learning computer class last fall at the University of California Riverside, some students attended in person. Others joined remotely, tuning into the class on Zoom from home. Students even had the option of watching a recorded version of lectures on their own time rather than attending in real time.

The class was one of dozens across the campus taught in what Riverside officials call RISE classrooms — or Rooms for Increasing Student Engagement. The classrooms, if approved by the instructor, give students the flexibility to attend lectures in a way they’re most comfortable. One-third of all classrooms at Riverside were upgraded before the fall term with new technology, including microphones and cameras, to allow for the possibility of mixing in-person students with remote students. The campus paid for the upgrades using federal Covid relief aid.

Salman Asif, professor of the machine learning class, said he had some students based in China who weren’t able to travel to California for the fall term, so he allowed them to join class via Zoom or watch recorded versions of his lectures. Once he gave them that option, he decided to afford the same flexibility to the rest of the class.

One Monday in the fall, about 25 students were on Zoom for a lecture. About the same number of students were physically in the classroom.

“Once I made an exception, I asked everybody if they want to attend; they can come or they can attend on Zoom,” Asif said. “And I also post the videos online. So, there are three options.”

The types of classrooms used for Asif’s class are becoming more popular not just at UC Riverside but at several universities in California, such as California State University Long Beach, CSU Northridge and St. Mary’s College in Contra Costa County.

The idea behind the classrooms is that not all students learn most effectively in the same way, said Jennifer Brown, UC Riverside’s vice provost and dean of undergraduate education. Student parents, for example, may prefer to take classes from home. The same is true for some disabled students. And some students may just like having the ability to watch recorded versions of class at their convenience.

“It helps to expand the opportunities for what our faculty and our instructors can do by giving them these different tools that elevate the level of interaction that students can have,” Brown said.

The classrooms also make it possible for students who have been exposed to Covid-19 to continue attending classes. That’s something that may prove especially useful during the winter term, with cases increasing as the omicron variant spreads. The term began Jan. 3, and the campus plans to have remote-only instruction through Jan. 28 but plans to resume in-person instruction after that.

Riverside has three sizes of classrooms, called A, B and C classrooms — with A being the smallest, B medium-sized and C being large lecture halls. Installed in the ceilings of the A and B classrooms are 26 microphones. Those microphones amplify the sound of whoever is speaking, allowing not only those physically in the classroom to hear them but also anyone attending via Zoom. The same is true if a student on Zoom asks a question or makes a point — the entire class can clearly hear them.

The ceiling microphones don’t work as well in the large lecture halls, so instructors teaching classes in those rooms can use a Catchbox, a microphone cushioned inside a foam box so it can be thrown around. Instructors and students can toss the Catchbox around the room depending on who is speaking.

Simultaneous class participation between students in person and those on Zoom may take getting used to in some cases.

Ryan Morales, a bioengineering major, said that in one of his bioengineering classes this fall held in a RISE room, a guest speaker one day joined the class on Zoom. During a question-and-answer session at the end, the instructors shared the time for asking questions between students in person and those on Zoom, Morales said.

“There was confusion regarding whose turn it was to ask a question and through what format,” he said.

The classrooms are also equipped with other technology, including cameras allowing instructors to broadcast their lectures to students on Zoom and record them for students who can’t attend the class live. The cameras are mounted in the back of the classrooms and are capable of panning around the classroom and zooming in on specific locations. The cameras, which can be controlled by the instructor, can capture things like notes on a whiteboard and PowerPoint presentations in high definition.

Many of the classrooms also have new dual projectors that let instructors simultaneously share their screen with students on Zoom and project the screen to the classroom.

For Asif, the machine learning professor, getting used to all the different technology was “not a seamless transition,” but he eventually found something that works — his iPad. He writes his notes and keeps his lessons on the iPad and projects them to the screen for the class and Zoom participants to see.

“I’ve found that to be easier” than using other technology like a computer, he said.

Professors like Asif have plenty of discretion when deciding whether to change their teaching habits when teaching in a RISE classroom. They don’t have to use the technology provided to them, and they also don’t have to permit students to attend remotely.

In some cases, professors prefer their students to be in person as much as possible, believing that students’ engagement and focus are better in a face-to-face setting. Some research has indicated that college students in online classes perform worse than students taking classes in person.

Alexander Duggan, a political science major at Riverside, said he had a political science class in the fall in one of the RISE classrooms, but his professor said the Zoom access was to be used primarily by students who have been exposed to Covid-19.

“The teacher actually has expressed a lot of frustration with using Zoom access. He emphasizes a lot that the class is in-person first. That should be the rule and that you should only be allowed to use Zoom if you have a Covid exposure or some other extenuating circumstance,” Duggan said.

Duggan added he prefers to attend in person anyway and said he was “totally fine” with that rule.

Brown, the dean of undergraduate education, said she’s hopeful that staff at XCITE, Riverside’s center for teaching and learning, can “help faculty understand the power of what we’ve put into the classrooms, what the technology can do.” She also said that, “in theory,” it’s possible that eventually students attending a class in any RISE room would automatically get the option of attending in person or remotely.

She also acknowledged, though, that there is value to in-person instruction and said it makes sense that some instructors would want to prioritize a traditional classroom setting.

Leave a Reply to Joey Kedsiersi