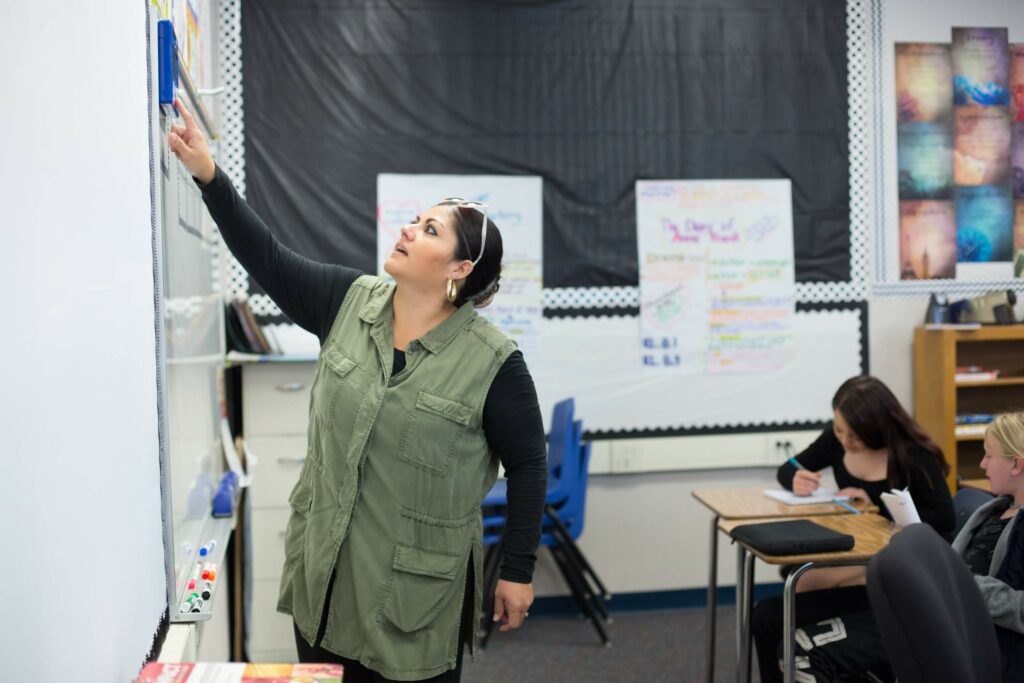 LAUSD will continue to redeploy staff from other parts of the district to fill the classroom vacancies. 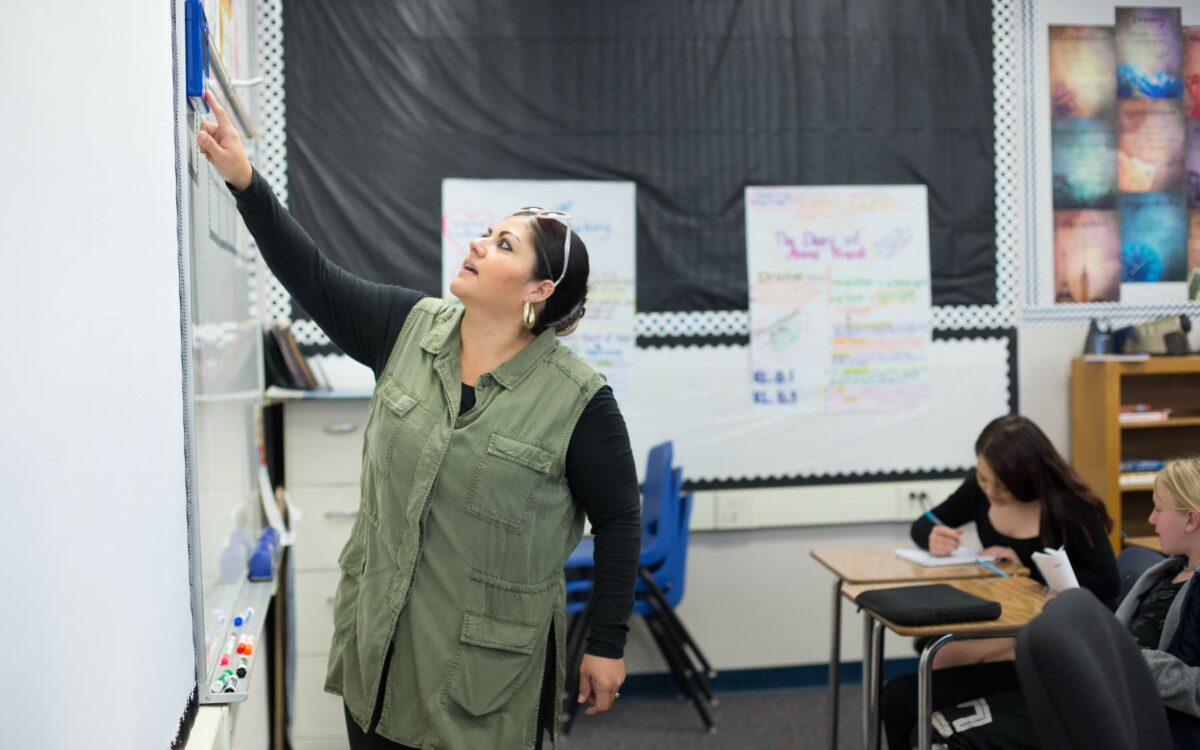 Credit: Julie Leopo/EdSource
There are about 200 teacher vacancies in Los Angeles Unified, the district says.

Credit: Julie Leopo/EdSource
There are about 200 teacher vacancies in Los Angeles Unified, the district says.

Just over 200 classroom teaching positions remain open across LAUSD’s nearly 1,000 schools following a summer of ramped-up recruitment. That leaves the district at a 99% fill rate as it welcomes students back to the classroom Monday to start the new year amid a nationwide staffing shortage that’s ongoing since before the pandemic.

“We are doing very, very well, even when comparing ourselves to small districts,” Los Angeles Unified Superintendent Alberto Carvalho said when discussing staffing Monday at a news conference.

The district began the summer with 2,100 vacancies. Those hired include fully credentialed teachers as well as those on provisional and intern permits. About 700 of those positions were officially filled in the last week following the return of principals and assistant principals to their schools on July 20 and 29, according to the district.

The sudden drop in vacancies, however, has left United Teachers Los Angeles, the primary union representing LAUSD teachers, with questions.

“We find it improbable that the district was able to fill 700 vacancies in less than two weeks considering that LAUSD continues to fall behind other districts in terms of the pay, class size and working conditions offered by comparable districts. The fact that we have sizable vacancies year after year is the real issue at hand,” UTLA Secondary Vice President Julia Van Winkle said in a statement to EdSource.

Last summer, the district started the school year with about 500 open positions, with 900 positions filled in June and July.

More than a quarter of the remaining vacancies consist of special education positions, followed by elementary school, math and science positions, according to LAUSD’s vacancy list, last updated Tuesday. A third are situated across Local District West, which includes parts of the South Bay and South and West Los Angeles. Half are in schools ranked as high- or highest-need by the Student Equity Needs Index the district uses to allocate funding based on need.

Looking at current staffing levels, Carvalho said he considers the district adequately staffed, saying the remaining positions go beyond necessary ratios due to schools’ flexibility in opening additional positions. He said LAUSD’s struggle with vacancies has been an issue of teacher distribution rather than shortage, adding that the district has not had trouble getting enough applicants but in getting applicants who are willing to work where needed.

“If you have somebody who lives in East L.A., and the call comes from a school in the Valley, sometimes there’s a challenge there,” Carvalho said. “We have a lot of applicants, a lot of people on the eligibility roster, but sometimes the match is not that easy.”

Still, the district has 500 staff members on standby for redeployment in the first week of school as LAUSD continues its dependence on administrators and out-of-classroom teachers to fill any gaps as the new school year begins. It’s a practice the district began using to address the teacher shortage in April, shortly after Carvalho joined LAUSD as superintendent. By the end of last school year, LAUSD redeployed 700 staff members to vacancies across the district, replacing both long- and short-term substitute teachers. Redeployed staff were assigned to classes aligned with their credentials, Carvalho said.

“This was a promise we made, a promise we are going to keep,” Carvalho said, referring to the district’s goal to start the school year with credentialed staff in every classroom.  “Going into the first day of school, I guarantee to this community every single student will have a remarkable teacher in front of them.”

LAUSD is also continuing its hiring freeze for teachers looking to move to out-of-classroom positions, meaning that teachers will have to remain in their current positions until a new one is hired to replace them.

Over the last few months, LAUSD has hosted daily hiring fairs across schools, held webinars and information sessions, and conducted in-person recruitment throughout the community, California and beyond.

As the fall approaches, district officials will continue to reconnect with local universities in person and are planning on reaching out to student organizations and affinity groups, according to the district. It has also focused on building its relationships with historically Black colleges and universities across the country as it aims to increase the number of Black educators.

Incoming Hamilton High School senior Maleeyah Frazier is hoping to see the impact of district hiring at her school as the new year shortly approaches. Vacancies haven’t been hard to fill at Hamilton, Frazier said. Though all of her own classes were staffed last year, she watched her friends and her twin sister navigate the instability of not having a permanent teacher. The AP English language class, for example, would either have substitutes or be taught by another AP teacher during her conference period before an administrator stepped in to teach while also handling administrative work, she recalled.

“It’s really detrimental to student learning because they don’t get to create those relationships or have student-teacher relationships with their teachers,” Frazier said. “We know that those are really important in order for students to thrive within the educational system — to have real student-teacher connections.”

Frazier’s had her fair share of classes without a permanent teacher too, remembering back to seventh grade, when her English class was taught for months by a long-term substitute. It made her feel like she was missing out on honing her writing skills before high school, she said.

Since launching its hiring spree a few months ago, LAUSD said it would prioritize filling positions at its highest-need schools. The district is offering a $5,000 signing bonus to new teachers who work at identified fragile schools. That includes Crenshaw High School, which ranks as a highest-need school, according to the district’s formula.

Crenshaw High School alumna Kamarie Brown dealt with staffing changes toward the end of her senior year in 2021 and remembers watching peers in other classes manage the shift from permanent teachers to substitute teachers as well. As the student board member during the 2020-21 school year, she also remembers discussing the issue of vacancies and instability with students at town hall meetings.

“While at school, I was kind of happy some days that we had a sub,” Brown recalled. “But at the end of the day, looking back, it’s kind of like, we really don’t know the effect it has on us, right?”

Crenshaw High School no longer has open teaching positions listed on the LAUSD website but had four open in mid-July.

UTLA’s Van Winkle said she believes focusing on new hiring is only part of addressing the teacher shortage. She said in a statement to EdSource that the focus needs to be on retention, since the district continues to deal with shortages year after year.

“Only focusing on yearly vacancies at the start of the school year ignores the real issue of long-term teacher retention,” Van Winkle said in the statement. “Until LAUSD can provide teachers with the pay and working conditions necessary to thrive in the classroom long term, our ability to maintain veteran teachers in the classroom will continue to disrupt student learning and school culture across the district.”

UTLA is currently in negotiations with LAUSD over their new contract, pushing for a 20% salary increase over the next two years, smaller class sizes and more. Negotiations are picking up again after UTLA’s summer hiatus, and it’s the first time negotiating with Carvalho at the district’s helm.

LAUSD said it plans to direct more efforts toward retention, which Carvalho said he recognizes as the next step. It’s one of the goals listed in the district’s new strategic plan, which will guide priorities for the next four years. The district is aiming to diversify the workforce, build new pipelines for teachers and expand professional development opportunities and wellness support, according to the plan.

Teachers like Nicolle Fefferman, who is taking a leave from teaching after 15 years with the district, hope the promises of the strategic plan aren’t too good to be true, as they await the results of the district’s bargaining with UTLA. The pandemic hit hard for her and others, she said, as teachers dealt with virtual learning, the mental health toll and learning loss.

“The push to make it business as usual this last year was what sort of killed me,” said Fefferman, a co-founder of the Parents Supporting Teachers group. “There was all this conversation about self-care and social-emotional learning. And even before we hit the school year, I was begging my administration, please tell us exactly how we’re going to help each other … and nobody would answer me.”