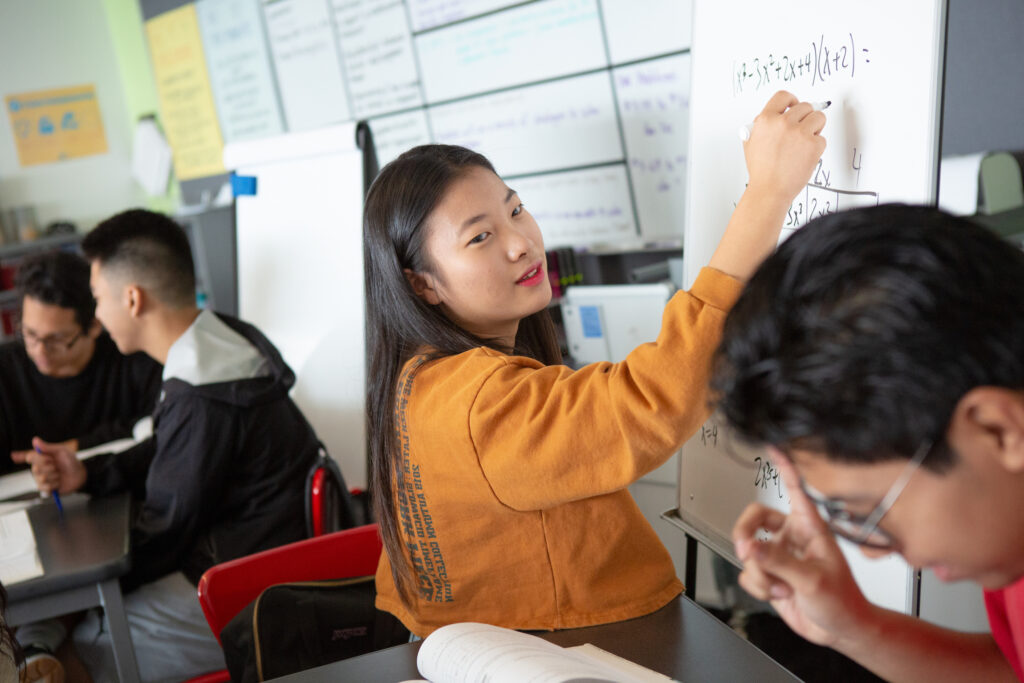 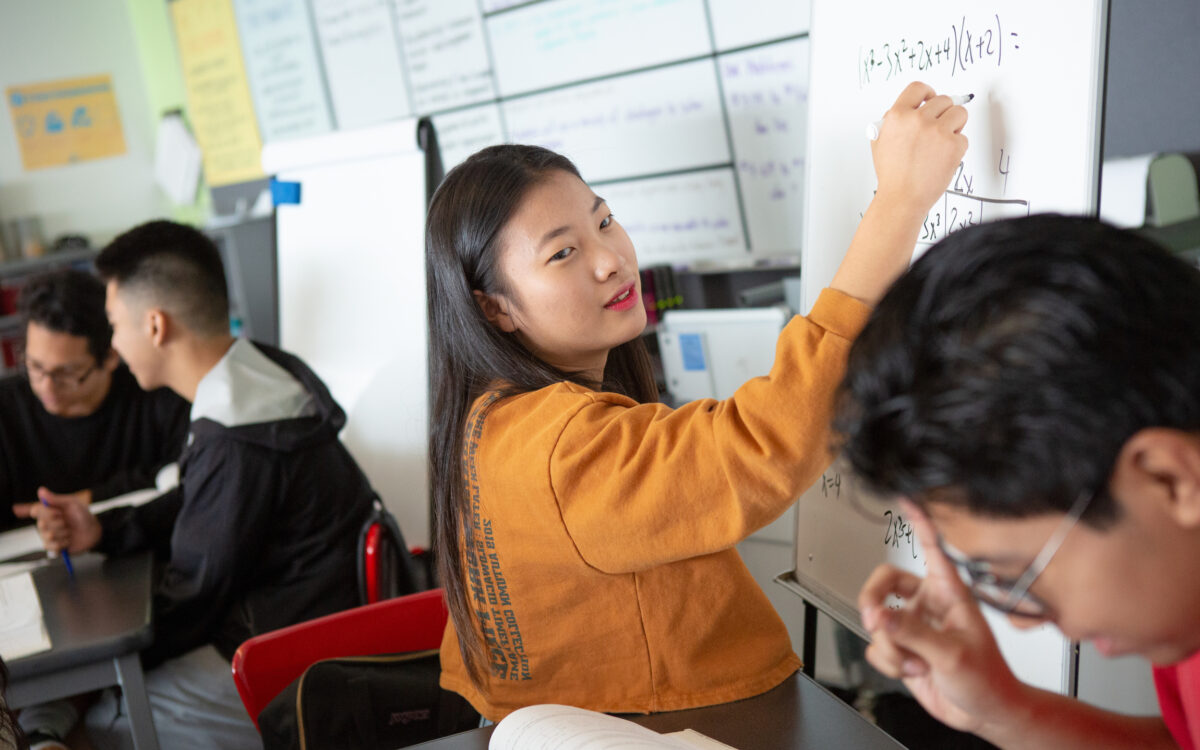 Photo by Allison Shelley for EDUimages
A high school student writes out the answer to a math problem on a whiteboard.

Photo by Allison Shelley for EDUimages
A high school student writes out the answer to a math problem on a whiteboard.

Operating a “pay to learn” summer school through a third party is an end run around the state constitution’s guarantee of a free public education, the lawsuit says. It was filed on behalf of two unnamed juveniles, who assert that hundreds of dollars in fees for summer courses denied them equal access to courses that other families could afford.

The system “propagates a dual school system that deliberately preferences students from families of means over students from financially disadvantaged households,” the lawsuit charges.

The state, the California Department of Education, State Superintendent of Public Instruction Tony Thurmond and the State Board of Education are named in the lawsuit. Attorneys from the Sherman Oaks law firm Vanaman German joined Public Counsel in filing it.

The lawsuit cites 17 Southern California school districts with more than 200,000 students that charge for summer school, although it indicates the practice is likely much more widespread. Those districts whose websites include links to for-fee educational foundations or summer school programs include Arcadia, Irvine, Manhattan Beach, Palos Verdes Peninsula, San Marino and South Pasadena Unified, along with Beverly Hills, Carlsbad, Mira Costa and La Cañada high schools.

The district foundations charge hundreds of dollars for courses, from $150 for driver’s education in South Pasadena to $775 for Spanish language in La Cañada High and $798 for U.S. history in Beverly Hills High — with assurance students will receive course credits or be able to replace poor grades.

In many cases, the foundations lease district buildings, use district curricula, hire district teachers and then return funding beyond costs to the district, the lawsuit said. In 2020, South Pasadena Education Foundation, for instance, sent back $666,016 to the district from its tuition-based private school, the lawsuit said. Along with enrichment courses “Academic Decathlon” and “Internship Program,” the foundation offers “UC Bootcamp” for $850 to prepare students to apply to the University of California. The course uses materials developed by UCLA that help with writing four personal application essays and correct grammar, the lawsuit said.

Some foundations offer partial scholarships or fee reductions, while others don’t, forcing economic hardship for low-income families and difficult choices that other families don’t face. The lawsuit cites plaintiff XT, a public high school student, who, along with friends, could not afford a summer course this year. This hindered their academic progress and also “evoked feelings of shame and resentment” among families, the lawsuit said.

However, the lawsuit argues that neither a full scholarship nor a fee-waiver policy would satisfy the constitutional requirements for a free education. A system of waivers for low-income students is “undeniably stigmatizing and degrading,” it says.

Districts argue that for-fee summer school run by a district foundation is necessary because the state does not fund summer school or noncredit enrichment courses.

But that’s still improper, said Mark Rosenbaum, director of Public Counsel’s Opportunity Under Law program. A legal alternative would be for a school foundation to raise money for the district for a summer school program that would be open to all students without charge.

The California attorney general’s office issued an opinion in 2020 that students cannot be charged for summer school, and there have been other rulings prohibiting student charges. Rosenbaum said he initiated a complaint several years ago that produced guidance that schools cannot charge extracurricular fees and the costs of athletic equipment.

The lawsuit claims the state Department of Education should have been aware of the illegal summer school fees because districts and school foundations have actively promoted them on their websites. When served notice of the practice, the department sent out a Sept. 1 letter to county offices of education, school districts and charter schools. The guidance, by Deputy Superintendent of Operations and Administration Abel Guillen, listed factors that districts should weigh when evaluating third-party summer school operations to see if they comply with the “constitutional prohibition against charging impermissible pupil fees.”

What the letter didn’t say is these types of operations are illegal, Rosenbaum said. Instead, the department is relying on individual parents to file complaints with districts and, if not satisfied, to appeal to the state, he said.

The burden shouldn’t be put on parents, he said. “Districts don’t have a leg to stand on; the state does not want to be held accountable.”

On Friday, the department defended the local complaint process, which the Legislature and then-Gov. Jerry Brown created in 2012 in response to a pupil fees lawsuit that Rosenbaum filed. It permits complaints to be filed anonymously “to alleviate concerns about stigma or retaliation,” the department said in a statement.

“As always, we remain interested in receiving any and all constructive ideas focused on protecting student rights, and accordingly are perplexed by why counsel in this matter have chosen to run to court rather than file local complaints and continue to engage in ongoing discussions that brought about the recent guidance,” the statement said.