LA schools grapple with ban on nearby homeless encampments 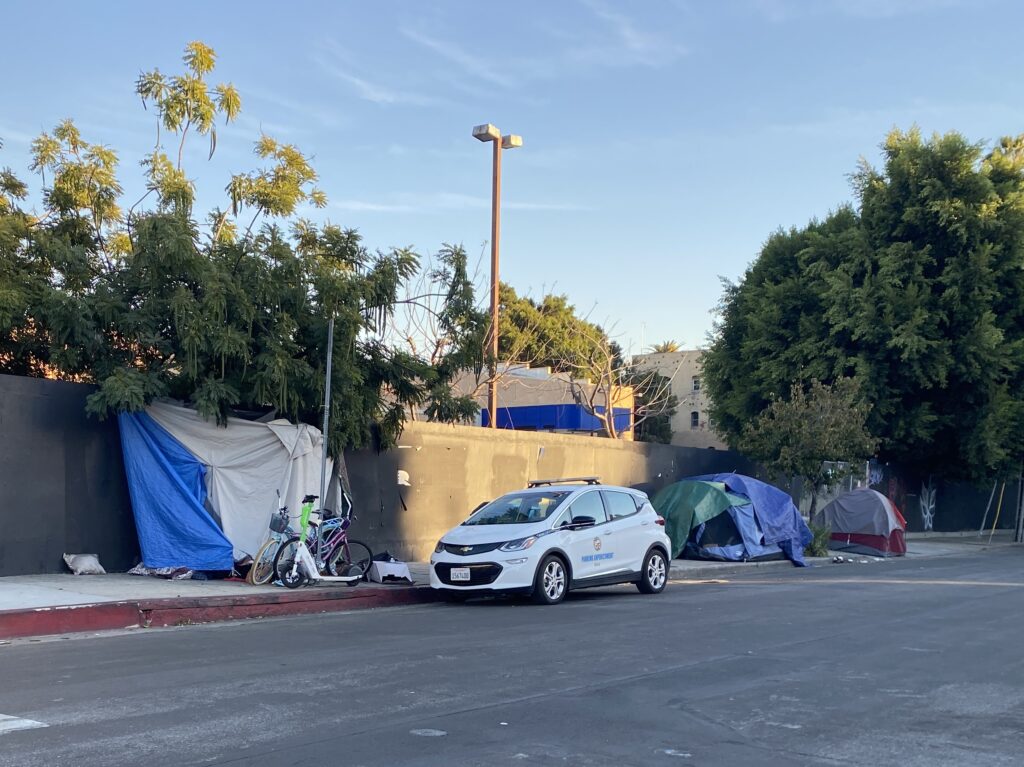 New rule against adjacent camps is controversial and unevenly enforced. 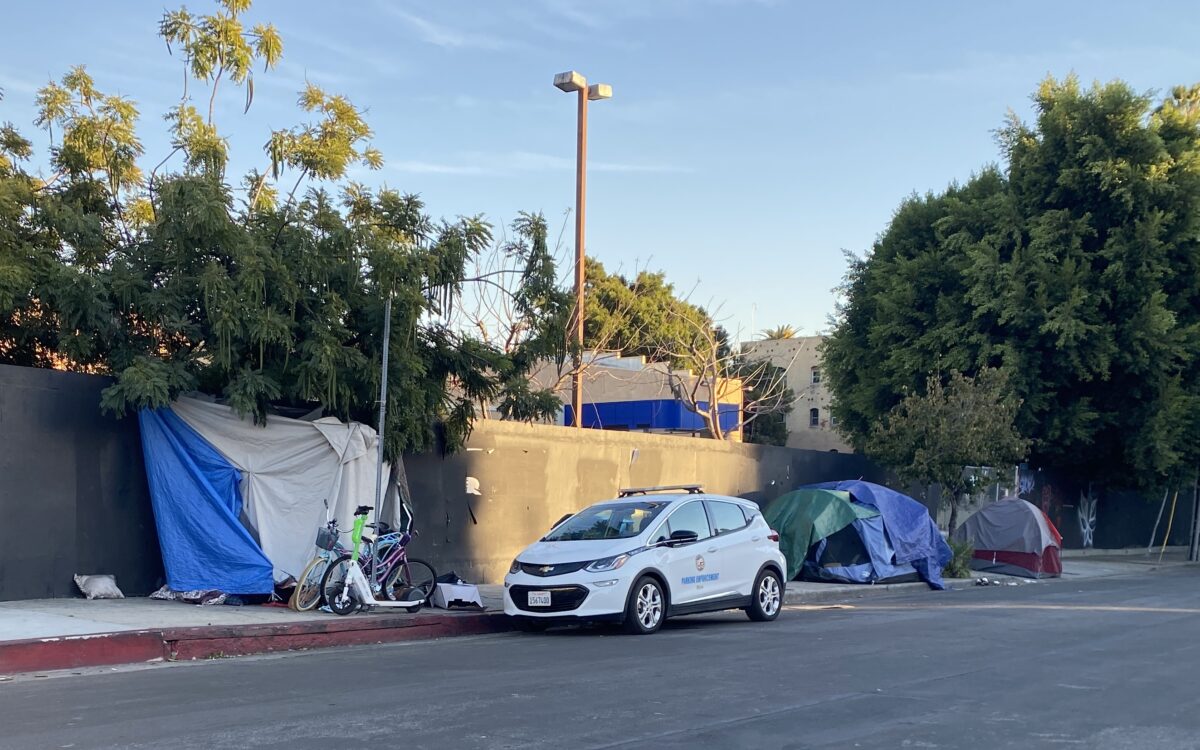 Principal Andrew Conroy ran down to the lower field at Virgil Middle School in Los Angeles’ Koreatown. It was a Wednesday in November during the middle of the school day, and he had just received notice that smoke was blowing over the fence from the homeless encampment that lined the field’s fence. There, at least 10 tents crowded the sidewalk, packed with bikes, tarps and personal belongings as its residents went about their day.

It was the second time over a few days that a cooking fire had to be put out in the encampments. And it had been just a few months since the Los Angeles city council expanded a ban on encampments to include those within 500 feet of schools and day care centers.

It’s been difficult having encampments so close, Conroy said. When Los Angeles city municipal code was expanded in August, it was a step in the right direction, he said. He’s happy the problem has been acknowledged, even though the new rule hasn’t been fully enforced.

When students walk by an encampment, they might get exposed to danger, especially if a homeless person might be high on drugs, Conroy said. “I think parents are just really worried about their kids. They don’t want to have to worry about it; they just want to get their child to school on time.”

Enforcement has been sporadic, though, throughout the sprawling Los Angeles Unified School District. That is controversial in a city where, according to the Los Angeles Homeless Services Authority’s most recent count, more than 40,000 people are homeless.

At Virgil Middle School, one of the two sets of encampments bordering the campus appears to have dispersed, but the one where the cooking fire occurred still remains, according to Conroy. The fire had already been put out by those in the encampment by the time he made it down to the field, but on other occasions, he’s had to call the Los Angeles School Police to respond and put them out.

The encampment ban, pushed by LAUSD, was passed by a City Council vote of 11-3 after days of protest by opponents at the meetings. Proponents said they hoped the new buffer would ensure more safety for children on the commute to and from school and shield the youngsters from the intimidation some feel by seeing drug use and nudity in the camps. Opponents said the new rule would do nothing to ease homelessness and would make the lives of the unhoused more difficult by limiting encampment options and criminalizing the inhabitants.

City Controller-elect Kenneth Mejia estimates that the ban makes 20% of the city’s sidewalks off-limits. However, enforcement largely depends on City Council members to see it through.

The school district expects a school to call 911 for the police if there is a disturbance. For violations of the new distance rule, campuses are supposed to contact a special school district office, which will then file a service request with the city for enforcement, social service help with new housing and sanitation efforts.

However, LAUSD Superintendent Alberto Carvalho, who pushed for the 500-foot buffer, said he’s heard from principals frustrated that their requests that the city move adjacent encampments have not been answered.

That’s been disappointing for parents like Monica Arrazola, who spearheaded an effort to gather 130 signatures from Hollywood High School’s parents in hopes of getting the district to address safety issues at the school. The school underwent lockdown in September after shots were reported on campus. Though police say the shooting was a hoax, it’s led Arrazola and other parents to think twice about the school’s surroundings.

Tents are scattered across several of the streets on the south side of Hollywood High School. A block away, a group of men sits in a circle on a Highland Avenue sidewalk alongside a couple of tents chatting animatedly. A burnt crate lies a few feet away with the green tarp behind it also charred.

“They take up the whole sidewalk. That boy has to get off the sidewalk to cross,” Arrazola said in Spanish, pointing to a student making his way around the group. “What happens if a crazy driver comes?”

Arrazola said she always picks up her two high school daughters from school rather than allow them to make it home on their own. Encampments along the path don’t leave enough room to pass on the sidewalk, and she’s heard some individuals yell profanities at students.

Arrazola has been able to share her frustrations at weekly meetings with a group of Spanish-speaking parents from across the district. At Our Voice/Nuestra Voz, safety has been a large discussion point among parents.

Rocio Elorza worries about her daughter, who walks by herself to and from King Middle School in Los Feliz every day. The school lies in Council District 4 overseen by Councilmember Nithya Raman, one of the three members who voted against the encampment ban.

Elorza said the number of homeless encampments has lessened, though she isn’t sure whether that’s because of the ban.

“My daughter is one of thousands of children who come alone, and I always say, imagine someone pulling her into one of those encampments,” Elorza said in Spanish. “She tells me that I’m crazy and that that doesn’t happen, but the fear is in us as mothers.”

At the Camino Nuevo Charter Academy high school, which is located near the Silverlake neighborhood and falls in outgoing Councilmember Mitch O’Farrell’s district, the number of encampments around the school has eased since a ban was first implemented in the area, according to junior Yessenia Castaneda. The school has signs surrounding its perimeter, noting the encampment ban, which was actually instituted in December 2021, earlier than the citywide action, as a special enforcement zone.

Before the law’s most recent expansion, the City Council could pass resolutions to enforce bans in specific areas. O’Farrell’s office, which supported the new rule, said that many of the unhoused surrounding the school have been relocated to transitional housing.

Still, encampments line a nearby side street and the underpass of the 101 freeway where many students walk to and from school.

Castaneda said she hasn’t had any major issues with the school’s unhoused neighbors but said it was sometimes uncomfortable to be approached by unhoused people who try to talk to her.

However, not all families support the ban.

A co-founder of Facebook group Parents Supporting Teachers, Nicolle Fefferman, is one of those who is hesitant about it. There are homeless encampments near Walter Reed Middle School in Studio City, where her son attends, but she said it hasn’t been a large topic of conversation among parents. The ban, Fefferman said, puts the burden on school administrators, and she’s worried about how it may impact unhoused students.

Homeless advocates are also protesting it. Dexter O’Connell, who does policy work for two local organizations, Safe Place for Youth and Hollywood Homeless Youth Partnership, said he understands parents’ worry. However, he doesn’t believe that criminalizing homelessness and moving unhoused individuals from place to place is the answer.

“If people aren’t camping outside School X today, but we keep moving the problem around and not solving the crisis of housing, then we’re going to continue to have this for years,” he said. “We have to be a lot more intentional about what we do to actually create the housing and services-based solutions that actually work.”

As LAUSD moves to ensure safe passage to school for students as a part of its strategic plan, district officials are also making strides to make more connections with community members and local organizations, Carvalho said. “The issue of homelessness is difficult, and we need to approach it in a very tactful, compassionate way,” said Carvalho, who had been homeless for a period in Florida after emigrating from Portugal.

For now, Principal Conroy hopes for a more permanent resolution to the safety concerns his school faces as the city implements the encampment ban.

“It’s a real issue,” Conroy said. “We definitely appreciate it being heard and definitely are hopeful about what it could mean if it could be continued to be enforced.”