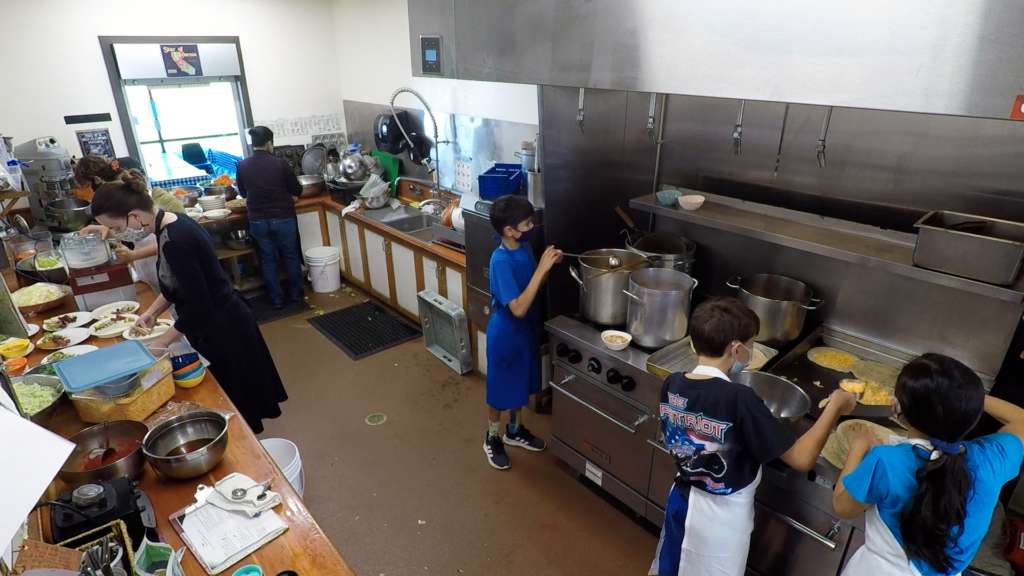 It’s no wonder that families from nearby Santa Cruz fill up many of the seats in the seaside town of Davenport’s only public school, intrigued by the food and the school’s renowned chefs: their own 10- and 11-year-old children.

For more than three decades, sons and daughters of farmworkers and farm owners, along with out-of-town kids, have taken turns making lunch for each other, their teachers and staff. Doing so defines the school as well as sustains it financially.

Kids enroll in this school just for the lunch

John Fensterwald takes us for school lunch, cooked from scratch by fifth and sixth graders.

EdSource · Kids enroll in this school just for the lunch

If fact, if not for Food Lab, as the meals program is called, there’d be no school. Davenport, population 368, is too small to populate a pre-K-to-sixth-grade school. About two-thirds of the students are interdistrict transfers, mainly from Santa Cruz and the mountain town of Bonny Doon.

“Having that sense of service to the other students in the school is important to me but also the skills that she learns in the kitchen,” said Doña Bumgarner of Santa Cruz, explaining why she enrolled her daughter, Stella, in Pacific Elementary.

Several fifth and sixth grade students rotate for a three-hour shift one day each week in the kitchen, Stella among them. The bustle begins at 9 a.m. in a compact kitchen, wide enough for two students to pass without bumping — as long as they look around and shout, “Opening oven!”

On the menu this day was pozole, a traditional Mexican pork soup, garnished with fresh cilantro. It was served with quesadillas, a salad and beans. Chefs Logan Franks, Moses O’Riordan and Shyon Johnson sliced vegetables, used food processors and cooked chicken while baking pumpkin bread for the next day’s breakfast.

They work with sharp knives under the watchful eye of Emelia Miguel, who chose the school for her daughter 14 years ago because of Food Lab and has directed it for the last eight years.

“The first few weeks, we just really focus on safety in the kitchen,” she said. “We try not to use a lot of equipment to chop and dice and slice. So we teach them how to use knives.”

Mishaps happen. The worst accident so far was when Miguel cut her finger, requiring stitches. A student mistook salt for sugar, spoiling a dish. “There is always a Plan B and a Plan C,” Miguel said. One time, the power went out in the kitchen, and (the principal) put out a call to parents. Grills from home soon appeared, and lunch was served in the parking lot.

Each year, Miguel sees students’ confidence build. “It’s a huge, huge task to produce all this food for 140 people, keep them safe, and we trust them to do that. They’re so empowered and feel good about themselves that they can do these things.”

“This is not superficial work. It’s meaningful, important, and they have to succeed. Otherwise, we don’t eat,” said Eric Gross, who is the one-school Pacific Elementary School District’s combination superintendent/principal.

One minute Miguel is suggesting to Shyon what he can do when the batter clogs a mixer; the next, she is reviewing with Logan how he calculated the ingredients for the pozole.

“I like how fresh the food is,” Logan said. “Not some packaged food with preservatives in it. I like working with the food. I also like skipping math.”

The teachers plan for students’ absences from class and see that they make up for the time they spend in Food Lab, Gross said.

“We exposed kids and myself to so many different things that I’d never cooked before. That was really fun. It was a great, great challenge,” Miguel said.

And also a challenge for picky eaters and kids who eat a lot of junk food. For them, “Emelia’s Rule” applies: “I ask, ‘How old are you?’ ‘I’m 5.’ ‘Well you have to take five bites of your food before you get up.’ And it generally works for students 5 to 11,” Miguel said.

“Generally, if we can start them in preschool and get them all the way through sixth grade, they are so less picky,” Miguel said. “I have a lot of parents who come and tell me, ‘I’m so thankful my child is eating their salad at home.’”

“Miss Emelia and the fifth and sixth graders are very clever in trying to figure out how not to disguise things, but to prepare them in such a way that they’re more kid-friendly,” Gross said.

Served with plates and silverware

Students don’t stand in line for food. To reinforce that lunches are special, the student chefs and Jerry Adame, a 27-year employee of the school, bring meals to lunchroom tables; students dine with silverware on plates. While students gulp down their meals before recess in many schools, at Pacific Elementary, kids eat after recess, tired and hungry, and have a longer time to eat than in many schools.

Miguel, an evangelist for student-centered programs, believes other schools can create their own versions of Food Lab. “It’s absolutely possible,” she said.

But Bumgarner and Gross said it would be hard to duplicate one big ingredient: Miguel. Bumgarner, who works in the school library with an insider’s view of the kitchen, said, “I know from having my own child in my own kitchen, it’s really hard to keep kids on task. Emelia gets plated meals on tables day after day with excellent food. That’s really mind-boggling to me.”

“Not a lot of people are suited for the job, who can design a menu, order, cook and supervise kids with knives, flames and boiling water,” Gross said. “Most cooks just want to cook.”

Then there are other factors: Many schools lack kitchens because, for decades, the state encouraged central kitchens in a district with meals delivered to outlying schools.

And there’s the added expense. Quality meals cost more, Gross said. Pacific Elementary is not a wealthy district; it receives less-than-average state funding per student. Pre-Covid, the district’s general fund annually subsidized Food Lab’s cost by $20,000 to $30,000 — $1 to $2 per meal. Since the start of the pandemic, the federal government has funded breakfast and lunch for all students, and soon the state will subsidize meals for all students, and Food Lab should nearly break even, Gross said.

Food Lab embodies the school’s spirit. “Most students consider it an honor to be part of Food Lab,” Gross said. “They take pride in saying, ‘I made lunch today.’”

“We do a lot of things differently as a school, and we attract people who think differently or want a different experience,” he said.