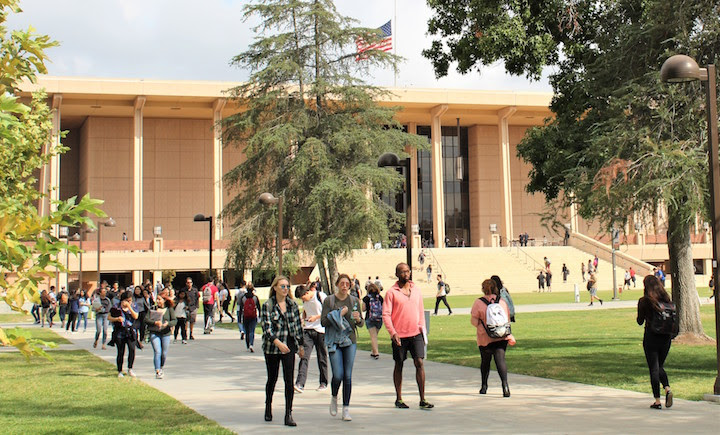 Newsom proposed a total of $39.6 billion for the University of California, California State University, California’s community colleges and the California Student Aid Commission, which administers financial aid. That includes hundreds of millions in new spending for each of those segments. With the proposal, Newsom signaled a commitment to creating more spots at UC and CSU for California residents, making it easier for those students to pay for college and pushing UC and CSU to increase graduation rates, especially for underrepresented students.

The governor pledged annual 5% funding increases to UC and CSU for the next five years, but with a caveat. The university systems must make several commitments, including reducing college costs, raising graduation rates, eliminating achievement gaps and preparing more students for the workforce.

“It’s about access and alignment. It’s about closing equity gaps,” Newsom said during a news conference Monday. “It’s all about more Californians getting into the UC and CSU. More enrollment, more opportunity, more alignment, better utilization of our dollars.”

The governor’s proposal also establishes a statewide college goal of achieving 70% degree and certificate attainment among working-aged Californians by 2030. He proposed a similar goal in his May budget revision last year, but nothing more happened. California is one of a few states that hasn’t adopted a statewide college attainment goal over the past several years, according to research by the Lumina Foundation, which promotes post-high school learning.

Newsom’s proposal goes to the state Legislature, which must approve a budget by the end of June. The proposal is just the first step in a process that includes a governor’s revision in May, when negotiations with lawmakers go through an intense period.

Newsom proposed that UC and CSU each receive annual increases of 5% to their base funding through the 2026-27 state fiscal year. But that funding is contingent on the two systems committing to achieve a number of goals agreed to between them and the governor under what Newsom is calling a “multiyear compact.”

CSU’s goals include increasing enrollment of California residents by about 1% per year, eliminating gaps in graduation rates for underrepresented minority students, improving four-year graduation rates by 30%, reducing the cost of instructional materials by 50% by 2025 and increasing the number of students who go into high-demand careers like climate action and health care, two priorities that Newsom focused on elsewhere in his proposal.

The offer, even with its demands on CSU, drew support. “This compact aligns with our ambitious Graduation Initiative 2025 goals of increasing graduation rates while promoting equity by eliminating the differences in completion rates between our students from underrepresented communities and their peers,” CSU Chancellor Joseph I. Castro said.

The goals for UC are similar. That university system is also expected to increase enrollment of California residents by 1% each year, increase graduation rates, eliminate gaps in graduation rates for underrepresented students, offer more undergraduates a path to a debt-free degree, and help more students move into careers where they earn a living wage.

The two systems are also expected to collaborate more with each other and the state’s system of 116 community colleges, including by participating in the Cradle-to-Career data system, a statewide education data system that California is creating to provide trend information to help students and their families with college and career planning.

For CSU, the annual 5% base budget increases will boost the system’s funding by $1.2 billion by 2026-27, said Robert Keith Collins, chair of the CSU’s Academic Senate, in a statement. Collins added that the resources would help CSU meet goals for student success, college affordability and preparing students for the workforce.

California’s system of 116 community colleges would receive $840 million in new, recurring investments and another $982 million in funding for one-time projects.

The colleges, which have suffered from enrollment declines during the Covid-19 pandemic, would receive a total of $150 million in one-time funding to retain current students and re-engage students who have dropped out during the pandemic.

Newsom also proposed $100 million to fund Cal Grants for community college students who are newly eligible for those financial aid awards and an increase of $65 million in one-time funding for the colleges to implement Assembly Bill 928, which passed last year. That bill requires the community colleges to help students who want to transfer to CSU or UC. Those students would be put on an associate degree for transfer pathway for their intended major. The ADT, as it is commonly called, is the most popular method of transferring.

“Recognizing that higher education is still the best path to social mobility, the governor’s proposed budget for 2022-23 provides the investment and support needed to help achieve our shared student success goals,” Eloy Ortiz Oakley, chancellor of the system, said in a statement.

Newsom also emphasized the importance of increasing the state’s workforce, particularly in health care, science and climate action fields. He proposed an increase of $130 million in one-time money, of which $30 million would be used this year, $50 million for 2023 and $50 million in 2024, to support health-care-focused workforce pathways for English language learners.

Another $20 million would support a grant that offers incentives to public-private partnerships to prepare students from high school through community college for high-skilled science, technology, engineering and math careers.

The budget would also support community college part-time faculty, or adjuncts, with an increase of $200 million in annually recurring money to expand health care covered to those employees.

“Gov. Newsom understands that the best way to ensure a quality education for our nearly 2 million community college students is to invest in the health of part-time faculty,” said Jeff Freitas, president of the California Federation of Teachers, the union representing 120,000 teachers, faculty and school employees in the state’s public and private schools and colleges.

CSU and its 23 campuses would receive $537 million in new money under the budget proposal, with $304.1 million in annually recurring dollars. That includes the $211.1 million increase in base funding for the system.

Separate from the base funding, about $81 million would create 9,434 more slots for undergraduate students this fall.

The state’s largest public university system could also see $233 million in one-time money: $100 million for maintenance and energy projects, $83 million to build an energy innovation center at CSU Bakersfield and $50 million for infrastructure improvements to CSU’s university farms, which are located on Chico, Fresno, Pomona and San Luis Obispo campuses. The investment in farming and energy innovation reflects Newsom’s priority to tackle climate change. The overall budget includes $318 million in one-time funding for five climate initiatives across the CSU and UC systems, including $100 million in matching grants at the UC for applied research.

“With graduation rates at all-time highs, the CSU continues to be one of California’s best investments,” Castro, the Cal State chancellor, said. “I am optimistic that the economy and the state’s coffers will continue their expansion. … It is incumbent upon us to ensure that the CSU receives appropriate funding, from both recurring and one-time sources, in 2022-23 as well as future years.”

UC would get about $99 million in recurring dollars to increase enrollment of undergraduate California residents by 7,132 students this fall across the system.

Newsom said he also wants to focus on reducing the full cost of attendance for college students, especially when it comes to housing.

Last year, the state promised $2 billion to a new Higher Education Student Housing Grant and allocated $500 million to the program. Funding for the program was divided among the three higher education segments with 50% promised to the community colleges, 30% to CSU and 20% to UC.

Newsom proposed adding $750 million for the second year of that program. All three systems submitted a total of 114 affordable housing projects in October for about $3.2 billion. In March, the state’s Finance Department will update the Legislature on which projects will receive funding.

The budget also increases funding for financial aid to $3.8 billion, of which $3.4 billion supports the Cal Grant program and the Middle Class Scholarship. Cal Grants are the main source of state-funded financial aid available to students. The Middle Class Scholarship is for undergraduates and students pursuing a teaching credential who have income and family assets of up to $191,000.

“To meet its ambitious new attainment goal, California must also continue prioritizing expanded access to increased state financial aid,” said Sameer Gadkaree, president of The Institute for College Access & Success, which advocates for college affordability. “That aid must aspire to meet students’ financial need up to the full cost of attendance by increasing support for nontuition costs.”