High school graduates eager to move ahead to college and jobs, leaving Covid behind 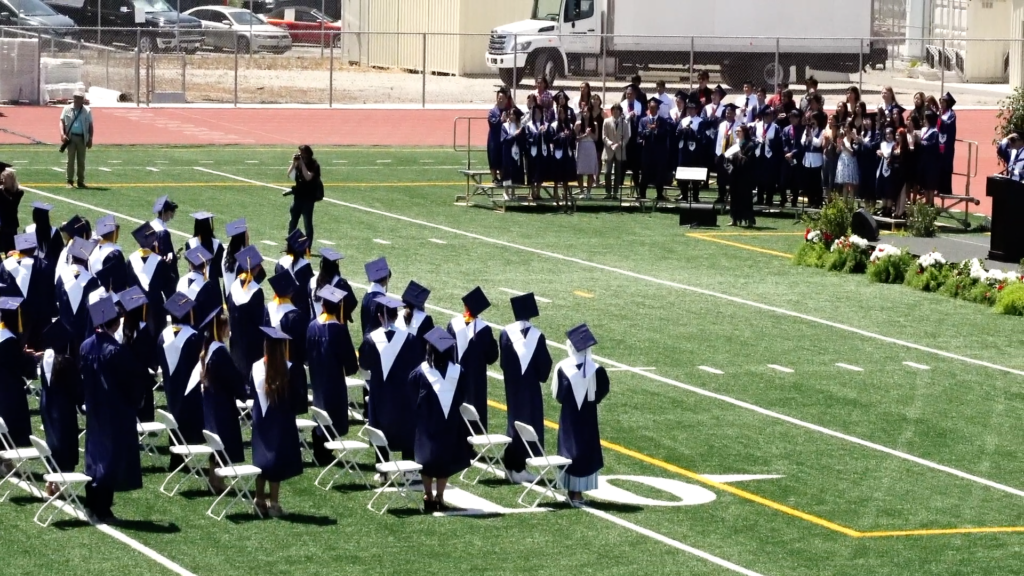 Class of 2022 excited and anxious as they move forward

High school is over for most in California’s Class of 2022, and it couldn’t be soon enough for some graduates. After more than a year of distance learning and another year of Covid restrictions on campuses, many are looking for more independence.

“I’m mentally prepared to move out,” said Kayla Merkel, a recent Elk Grove High School graduate. “I’m ready. I’m the oldest sibling. I have four little siblings and I think it is time for some quiet.”

But will the newly minted adults, many who fell behind academically and socially, be ready for college and careers after a pandemic dramatically shortened their high school experience?  Of the 12 students EdSource is following this year, 5 are going to community colleges, six to universities and one is deciding whether to start a job.

This is the second in an occasional series on the Class of 2022, their experiences through Covid and their plans for the future. Join EdSource as we follow these 12 students over the next year into career or college and tell their stories. Story by Reporter Diana Lambert; videos by Jennifer Molina and Andrew Reed; map illustration by Yuxuan Xie. Rose Ciotta, EdSource projects and investigations editor.

Merkel wants to move into an apartment with her boyfriend as soon as she turns 18. Next fall she plans to study photography at Cosumnes River College in Sacramento. She wants to attend a four-year university after community college, possibly to become a teacher.

Diego Camacho, 18, is excited about attending the University of California Los Angeles next school year, although it means he will sleep in his car most nights. Camacho will take the often more than two-hour commute to his family home in East Los Angeles a few times a week to do laundry and take showers.

He can’t afford to rent an apartment or live in the dorm, so Camacho doesn’t believe there is an alternative to sleeping in the car. He doesn’t think it is against campus rules or that it is uncommon. 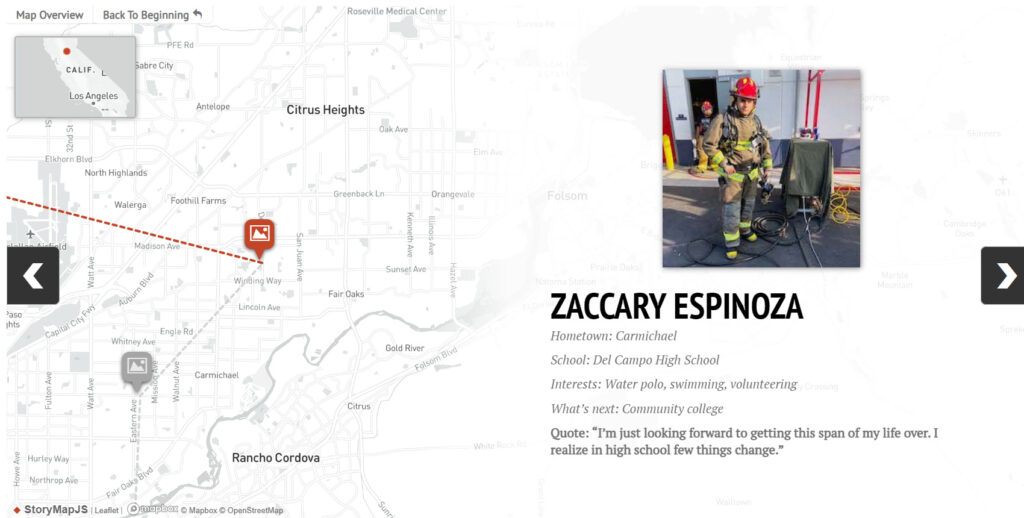 Camacho, who will graduate from Collegiate Charter High School on Wednesday, is determined to graduate from UCLA in three years in order to cut down on college debt. He will work on campus and study after school. There won’t be a lot of time to battle LA traffic, he says.

“I want to save as much money as I can,” he said. “It is going to be hard. I understand it will be really hard. It’s not something easy, but I feel I can challenge myself. I feel I have the perseverance to accomplish that.”

Camacho, a member of a boxing club in East Los Angeles, missed a lot of matches during Covid but used the extra time to get a jump-start on his college education by taking community college classes online — something he would not have been able to do during the pandemic.

He is excited about the potential to meet new people at the university. The science communications major worked on the LA Times High School Insider and would like to be a science writer for a news organization in the future.

Recent Edison High School graduate Gannon Peebles also is excited, but nervous, about moving 3,000 miles away from his Fresno home to attend Columbia University in New York  City next school year. He is anxious about making new friends.

“I hope, as I move away, I can retain some social skills that were pre-pandemic and make long-lasting friendships,” he said.

Peebles selected Carman Hall at Columbia as his new home because the first-year residence hall is considered to be the most social, according to online accounts. He put his bio on an Instagram page for incoming freshmen, ultimately finding a roommate he believes will be a good match.

The self-proclaimed “math nerd,” who graduated with a 4.0 grade-point average, plans to study applied mathematics and computer science. He was awarded a scholarship by Columbia that pays almost all the $84,000 annual cost of his tuition, room and board.

Peebles doesn’t think he is behind academically because of distance learning. During the pandemic he took courses virtually at UCLA and a Fresno community college, earning A’s in each class.

“I think I’m a pretty motivated student and I feel like I’m doing well right now in my classes,” he said before graduation.

Payton Zarceno, who recently graduated from Mt. SAC Early College Academy in West Covina, is excited about studying biochemistry at UCLA but nervous about moving away from her family. She wants the college experience but isn’t too happy about sharing bathroom facilities and finds using a communal washer and dryer “unnerving.”

“I’m more nervous than I thought it would be,” Zarceno said. “I’ve really gotten accustomed to being at home and being with my family and having all my immediate friends around me. I’m not sure who I will be living with. I’ve never met these people before.”

Zarceno and Nicholas Harvey were still shopping for dorm roommates last month. Both were asked to fill out lifestyle questionnaires to help them find compatible matches. The forms ask questions about the time students go to bed, whether they smoke or drink, what room temperature they prefer and whether they turn on music or the television while studying.

Harvey also will be required to write an essay before he is matched with a roommate at Stanford University in Palo Alto. The California High School graduate plans to major in both history and a public policy-oriented major, although he’s not quite decided which one.

Zarceno, a self-proclaimed homebody, has never wanted to leave Southern California, but the pandemic solidified her decision to stay close to home. Despite only being 35 miles from UCLA, the LA traffic makes the family home in West Covina seem far away, she said. Getting home is made even more difficult by a common problem for many recent high school graduates – a lack of a driver’s license.

Zarceno isn’t concerned about her ability to manage academically, but she has concerns about navigating the school socially.

“I am worried about the two years of socializing that I lost, but I’m confident that college will give me the time and space to make up for it,” she said.

Heritage High School graduate Tatiana Torres credits the pandemic and distance learning with helping her decide to go to college.

“Now that I was at home, I was able to think about my future and maybe I had a chance to go to college,” the East Bay resident said. “It helped slow down life for me and allowed me to think about how I would like my future to look like.”

Before that Torres worried that she would never go to college. She suffered a severe concussion during a basketball game in middle school. The accident left her with headaches and sensitivity to light and sound so severe she could only attend her Brentwood high school part time during her freshman and sophomore years. Much of that time was spent in the office being dispensed medication.

Torres was unable to get into any of the colleges she wanted to attend, so next fall she will attend community college with the hope that she gets a spot at UC Berkeley, UC Davis or UC Santa Barbara the following school year to study political science.

She isn’t worried about being behind academically because she missed so much in-person instruction. Her time at home taught her how to learn alone and to advocate for herself, she said.

“I’m actually better prepped for college than if I didn’t have these events happen to me,” she said.

Torres didn’t attend many of the senior class activities offered by the school because of concerns about Covid-19, particularly because she has an aunt with a chronic illness. She did attend homecoming, Senior Scholarship Night and her graduation.

“Being at home made me OK to not do the regular things in life because my priority was keeping everyone safe,” she said. “But, when Covid was dying down a little bit, I was excited to do more ‘normal things.’”

Torres created Calm4You, a website to help children struggling with mental health issues after hearing about children impacted emotionally by the pandemic. Torres plans to continue her mental health work, and also would like to play a part in ending gun violence.

“Advocating for mental health was the steppingstone to feeling like I can actually do something about these problems,” she said. “I think that is the worst part of being a kid; all you can do is feel bad, I guess.”

Jennifer Tran also would like to continue the advocacy work that she began during the pandemic. She wrote or advocated for more than a dozen legislative bills to aid California students as the policy director for GENup, a student-led social justice organization, while attending Bolsa Grande High School in Garden Grove. She also completed a term as the student member of the Garden Grove Unified School Board.

Tran will study public policy at UC Berkeley in the fall. That wasn’t her original plan. She wanted to attend an out-of-state school so she could gain a little more independence after two years at home. But she started to change her mind about moving so far away as things began to get back to normal, she said.

“I think that the first instinct that so many students are experiencing after Covid-19 and isolation for two years is to move as far away as possible,” she said. “While valid, it is a reaction that some may come to regret sticking to, and I realized that I would have regretted.”

“People start to understand they are breaking off from each other,” he said. “Some try to cling on. Some try to break it off early. No matter what, it is hard for both parties. The school year is very difficult to get through. Everything I’ve heard from every single senior is that if school ended right now they would cry tears of joy.”

Like many new high school graduates, Fu isn’t sure what career path he will follow. So, next year he will stay home and attend nearby American River College while he explores possible career paths.

The senior picnic, senior sunset, even graduation, didn’t quite stack up to graduation events of previous years, according to some seniors. They attributed this, in part, to constantly changing Covid-19 restrictions, which made it difficult for members of student government to plan the events.

Victor Contreras, a recent Cosumnes Oaks High School graduate, doesn’t think Covid played a part in his decision to move across the state to attend San Diego State. He always wanted to move away from his hometown of Elk Grove, near Sacramento.

But it did sap his motivation to begin applying to colleges, he said. It wasn’t until he was back in school and prompted by some of his teachers that he began applying.

A spike in Covid infections canceled the homecoming dance earlier this year, but Contreras was able to attend other school events, although he found them anticlimactic — even graduation.

“I was always thinking that day is so far away, and then it’s yesterday,” he said. “It’s never what you expected.”