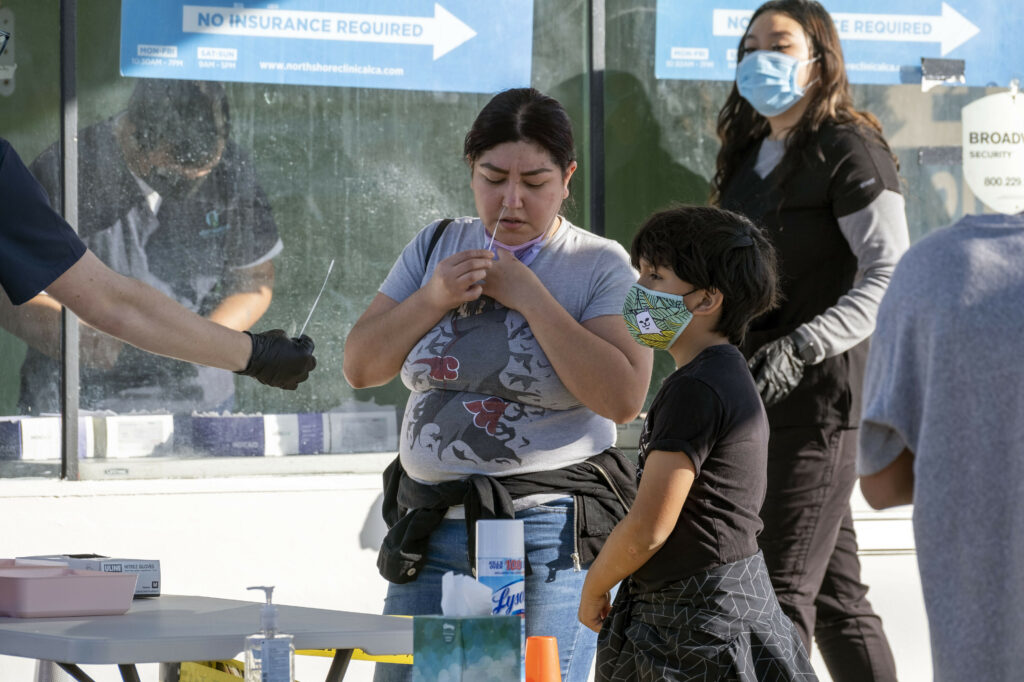 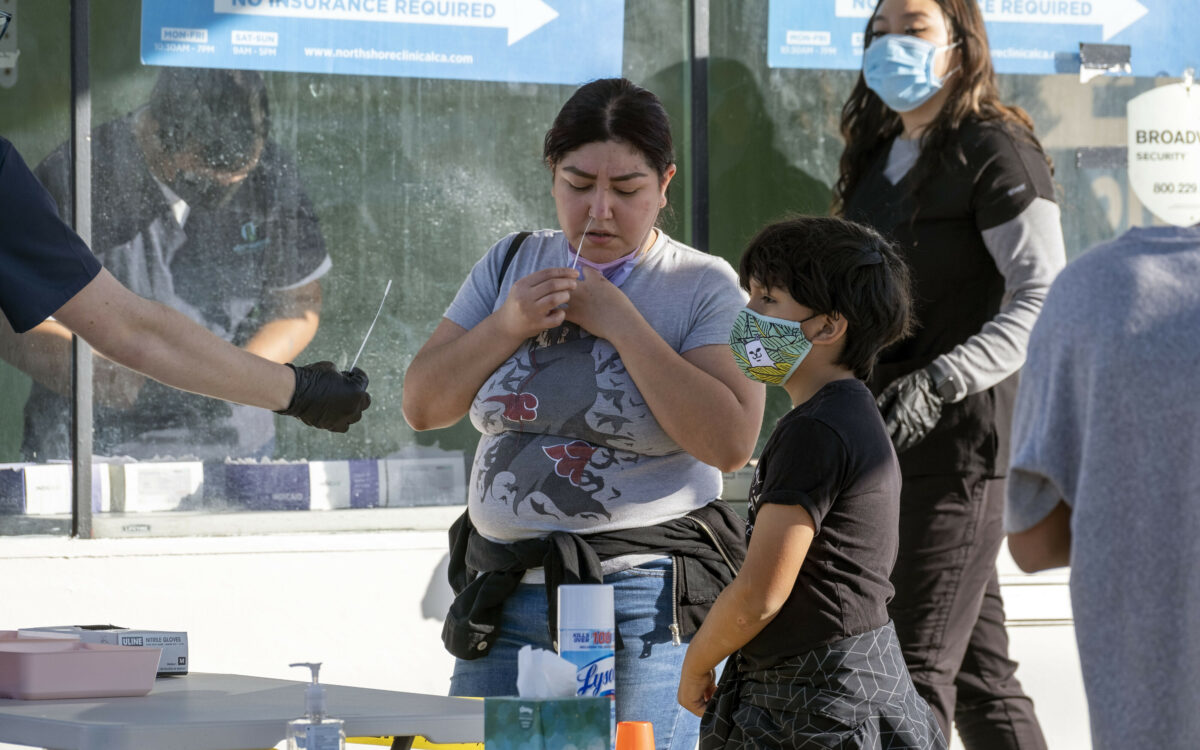 Credit: Hans Gutknecht / The Orange County Register via AP
A woman self-administers a COVID-19 test at a testing site in Van Nuys on Jan. 4, 2022.

Credit: Hans Gutknecht / The Orange County Register via AP
A woman self-administers a COVID-19 test at a testing site in Van Nuys on Jan. 4, 2022.

California’s schools are reopening after the holiday break amid a sharp spike in Covid cases and test scarcity, but some school officials are concerned that outbreaks and staffing shortages will make it difficult to stay open in the coming weeks.

Complicating matters are conflicting messages from state and county officials about closing schools and the number of days school staff must quarantine after a positive test or exposure.

Superintendents facing the prospect of closing a school or the entire district report they’re confused about whether they will get state aid for the days campuses are shut down. That’s because last June, the Legislature passed a law to make it difficult for districts to close schools. The law requires district officials to consult with both the California Department of Education and their county office of education before closing schools. And they would have to file a plan for how the school or district would provide independent study for the students who would miss time on campuses.

Districts would get funding if schools are closed because of staff shortages due to Covid infections and quarantines, but not if students are absent. The state clarified Wednesday that the funding can be obtained retroactively, a relief for those districts facing emergency situations, officials said.

There are still hurdles.

Schools must apply for an emergency exception and prove that they had “exhausted all options” for obtaining staff coverage, such as finding substitute teachers and assigning administrators to classroom duty, in order to receive funding.

Nevada Joint Union High School District Superintendent Brett McFadden said officials in his district would close schools to protect the health and safety of students and staff — and would sort out the funding implications with the state and federal governments later.

“It could come to a point where we don’t have enough adults to sufficiently oversee the safety of our students,” McFadden said.

Edgar Zazueta, senior director of policy and governmental relations for the Association of California School Administrators, said meeting all the state’s requirements in an emergency would be impractical.

“The policy was written in anticipation that districts could plan for this, but the practical reality is that a lot of them are worried on any given day because of absences, they would not be able to operate,” Zazueta said.

“There’s a lot of nervousness around the state,” he said.

Some of that nervousness is because California school districts saw higher-than-normal staff absences after schools reopened this week. Between 12% to 15% of the teachers in Sacramento City Unified were absent each of the first four days of the week. San Francisco Unified had 11% of its teachers missing on Monday, 17% on Tuesday. Long Beach Unified reported 11% of its teaching staff were out Monday — triple the normal level after a holiday. In Kern County, school districts said 10% to 15% of their staff were absent, double the usual average, and at Oakland Unified, 9% of its teachers were out Monday.

California has seen a dramatic increase in the number of people infected with Covid-19 because of the highly contagious omicron variant. The state has had 5.5 million cases of Covid, resulting in more than 76,000 deaths since the pandemic began in 2020. The seven-day test positivity rate Thursday was 21.4%.

Because of substitute shortages, other district staff with teaching credentials are being called upon to cover classes. Los Angeles Unified, for example, has about 4,000 administrative employees ready to staff classrooms, cafeterias and other positions at schools next week if too many teachers and other staff are absent, according to a district spokesperson.

West Contra Costa Unified Superintendent Chris Hurst shut down the district’s administrative office and taught a high school physics class Monday because 300 teachers were absent from district schools – many in isolation after testing positive for Covid-19. The district is still working on a long-term strategy to address the staffing shortage, Hurst said, but for now, it’s “all hands on deck.”

That strategy wasn’t quite enough this week, forcing the district to decide to close completely Friday and next Monday. The closure won’t affect its state funding because the district will use two “smoke days” — flexible days off that are built into the school calendar that are typically used when air quality is poor due to wildfires.

The district had already closed King Elementary in Richmond on Monday afternoon because of 10 student Covid cases. The school pivoted to remote instruction through Jan. 11.

“There’s so much strain on the system right now, so many educators and students are out sick, it’s a really challenging situation for our schools,” said Ryan Phillips, the district’s spokesman.

The extra days away from school will also allow those who are sick to heal, Hurst said in a message to parents Wednesday afternoon. The decision to temporarily shut down the district, the superintendent added, is “an action we take very seriously and will only do when it is absolutely necessary.”

A lack of promised tests from the state may have added to the reluctance of teachers and students to come to school. Last month, California Gov. Gavin Newsom promised the state would supply two Covid-19 tests to every K-12 student to make the return to school safer and ensure schools stay open. By the first day of school on Jan. 3, though, only half of the 6 million tests had arrived, said Kindra Britt, spokeswoman for the California County Superintendents Educational Services Association.

The tests are being distributed to county offices of education for pickup by local school districts.

Morgan Hill Unified School District didn’t receive its share of Covid tests until Sunday — the day before school started, said Lanae Bays, district spokeswoman. On Saturday night, district officials hurriedly sent emails to parents and asked for staff volunteers to distribute the tests. By noon Sunday, parents and children were lined up in front of district schools waiting for the tests.

The delays are due to delivery problems brought on by the weather, said Superintendent of Public Instruction Tony Thurmond at a press conference Wednesday. Despite that, he said, between 400,000 and 800,000 tests have been delivered to Los Angeles County. He said the county would likely need another million tests.

Los Angeles Unified plans to distribute most of the tests Friday, so that students would have them before school begins Jan. 11, according to Thurmond. The tests will be distributed at 63 locations.

The California Department of Education is encouraging families to report test results at the Primary.Health website so that health officials can collect data on the impact of the pandemic on California schools.

Recent California Department of Public Health guidance reducing the length of quarantines to as few as five days with a negative test could help with the staffing challenges. But district officials are confused about whether to follow that guidance or California Occupational Safety and Health Administration regulations for employees, which require a 10-day quarantine. Local health jurisdictions may have more restrictive isolation or quarantine requirements.

“We desperately need an update from Cal/OSHA,” Britt said. “We have been told they will make a statement soon, but nothing official — so the 10-day quarantine stands.”

High rates of infection have prompted teachers in San Francisco, Oakland and Chicago to call for sickouts, a move that could further hamper efforts to keep schools in those cities open.

A group of Oakland Unified teachers set a sickout event for Friday, calling on the district to purchase and distribute N95 and KN95 masks for all students and staff, provide weekly PCR testing for all students and staff, and take other measures while closing campuses for two weeks. The group said withholding their labor is the “only solution” to winning “the pandemic response we deserve.”

Oakland Unified warned parents Thursday that the potential loss of additional teachers amid this week’s shortage would be “devastating” to efforts to keep campuses open this week.

California Health and Human Services Secretary Dr. Mark Ghaly said his department is working with the California Department of Education and local public health authorities to make sure schools have what they need to remain open. That means ramping up testing and providing resources for schools to offer well-fitting masks with filters.

On Wednesday, Thurmond announced the launch of a workgroup to study school staffing shortages and to come up with solutions. The group will consist of school district leaders, school staff and representatives from the California Commission on Teacher Credentialing, among others, Thurmond said.

The Legislature passed the legislation limiting school closures in June, when it looked like the worst of Covid had passed. It requires that districts that want to be funded during a closure first file a Form J-13A, which has long been used to recover funding in the wake of closures caused by natural disasters like fires and floods.

The clarification issued Wednesday by the California Department of Education in response to questions from EdSource specifies:  “There is no specific deadline for submitting a Form J-13A.  A Form J-13A should be submitted as soon as possible once the emergency is over. This way the (district) can determine the exact number of school closure days and/or material decrease in attendance for the request.”

Elizabeth Dearstyne, director of the Education Department’s School Fiscal Services Division, confirmed Thursday that, although the J-13A form can be submitted later, the multilevel consultation must happen before closing a school or part of a school. The department will check to see that it has been done when considering funding. There may be “limited instances” when prior consultation couldn’t be completed before closing, such as when there’s a bus driver shortage and students couldn’t attend school, she said.

Some funding uncertainties over closures could be resolved in a bill that Assemblyman Al Muratsuchi, D-Torrance, introduced this week. Recognizing that Covid has continued to lower school attendance and increase chronic absenteeism, Assembly Bill 1609 would guarantee districts’ funding levels in 2022-23 for the third consecutive year at the pre-pandemic year of 2019-20.

Muratsuchi said details of his bill still need to be worked out but that his “intent is to continue to keep schools open and kids in the classroom to the extent possible, but also to recognize realities that schools are facing from student absences and staff shortages.”