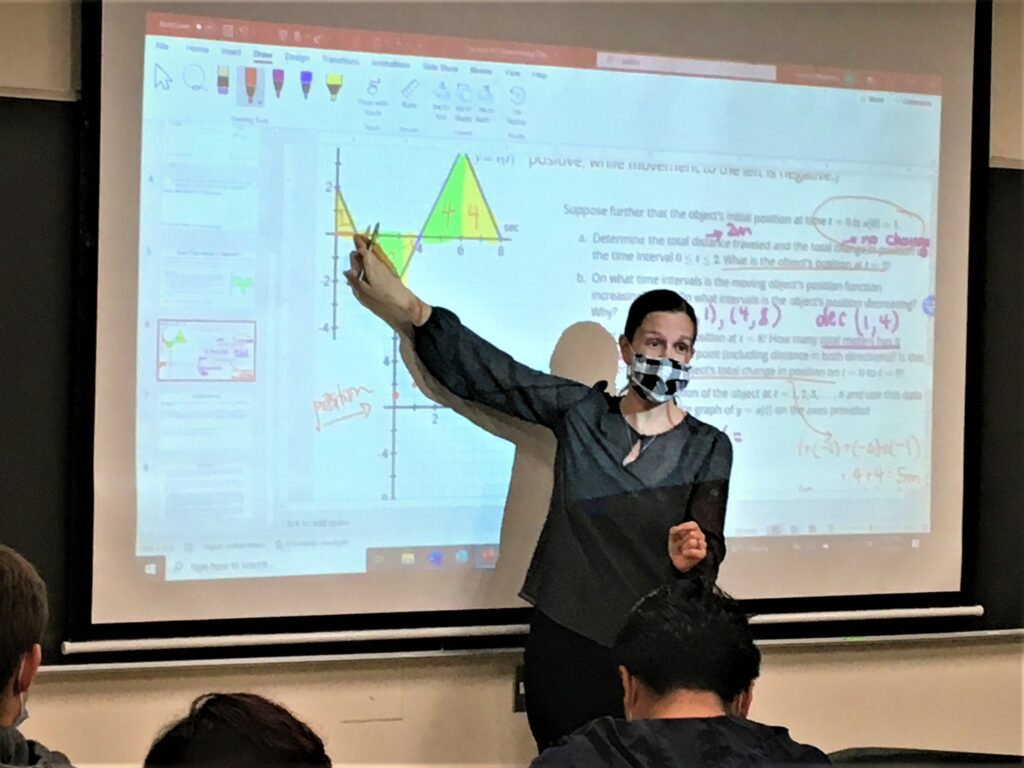 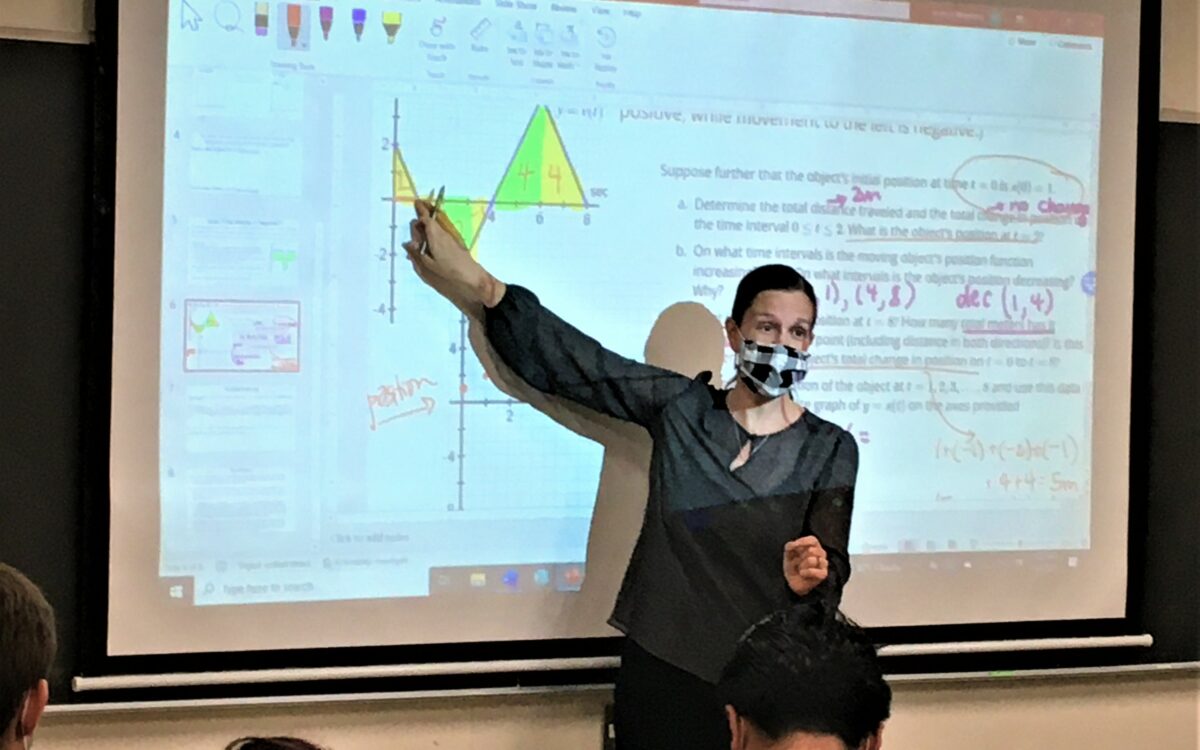 At 8 a.m. in a Salazar Hall classroom, Cal State Los Angeles instructor Jennica Melendez was leading her Calculus 1 class through a lively group discussion about the virtual distance a stationary bicycle rider would cover while changing speed over an hour’s workout. From a projection screen, students studied a graphic showing the curve of the accelerating and slowing pace supposedly set by an aerobics trainer.

The calculation was part of an important lesson in Calculus 1, which itself is extremely important to many students. The course is usually required for anyone pursuing careers in science, engineering and medicine, but it has one of the highest rates of failure and withdrawal across California State University campuses statewide.

With active student participation rather than just lectures, Melendez and other Cal State LA calculus professors are trying to get more students to pass Calculus 1 and qualify for majors in the so-called STEM areas of science, technology, engineering and math. The Los Angeles campus and some others are seeing some success with that new teaching approach. But big challenges remain in teaching calculus — the branch of math that studies rates of change.

At 21 of the CSU’s 23 campuses, at least 20% of students on average in Calculus 1 received D or F grades or withdrew over the past three years, according to an EdSource analysis of data from the schools. Administrators consider “DFW” rates of 20% or higher a matter of great concern. At 10 of those campuses, including Los Angeles, the DFW rates have been 30% or higher in Calculus 1.

Trying to break that pattern, Cal State Los Angeles faculty have changed textbooks and teaching methods, emphasizing “active learning” and class camaraderie over lectures. They have added extra review hours for students and are coordinating material and tests. The aim is for students to “discover things rather than being told things,” Melendez explained.

Since Calculus 1 is among the courses with the highest rates of failure/withdrawal across the CSU, these efforts can have significant consequences, both for students and the entire CSU system.

Failure can mean extra semesters to graduate if frustrated students then switch their majors out of science or engineering. That’s why Calculus 1 is a hurdle for the CSU initiative seeking to improve statewide graduation rates and shorten time to degrees. As EdSource reported, CSU has focused on reducing failure rates in required courses enrolling large numbers of students systemwide.

The failures thwart too many potentially promising scientists and engineers, according to Pamela Burdman, co-author of a new statewide report,  which urges reforms in teaching of college calculus.  California is “missing a huge opportunity to bring in a huge pool of talent to the STEM field – which we can’t afford to do,” said Burdman, who is executive director of Just Equations, a Berkeley-based nonprofit that advocates for improved and more equitable math education.

Calculus success, especially for Black, Latino and other underrepresented students, is “central to ensuring equitable opportunities for the next generation of Californians as well as a thriving economy,” said the report titled “Charting a New Course: Investigating Barriers on the Calculus Pathway to STEM.” It was created by Just Equations and by the California Education Learning Lab, a state-funded grant-making organization charged with improving learning outcomes.

One of the biggest problems is how to build up weak math skills from high school without watering down calculus material or inflating grades, faculty say. Those concerns were heightened given significant declines in recent standardized math test scores for K-12 California students, most of whom spent 2020-21 in distance learning.

CSU Bakersfield reports that 35.5% of students on average have been failing or withdrawing from Calculus 1 since 2018. That is among the worst such outcomes in the CSU system. To help students get over the bumps, the campus now offers more specialized tutoring and recorded online lectures with more class time devoted to problem-solving; class sizes have been reduced for pre-calculus courses, often a prerequisite students must pass.

However, even with extra help, too many students lack basic algebra and arithmetic skills, according to math professor Yangsuk Ko, coordinator of calculus courses at CSU Bakersfield. Some students grasp calculus concepts but then “mess up” in working out equations. “Their mastery of basic algebraic skills is very, very low,” Ko said.

Ko said he hopes future reforms, such as more active learning, will build students’ skills. Campus faculty and administrators “realize that calculus is a bottleneck course, especially for engineering majors,” he added.

One potential issue is the controversial proposal to change the state’s framework for K-12 so that all students take the same math classes through sophomore year of high school, rather than placing some into advanced courses early. Some experts warn that rushing students into high school calculus could be harmful because they need more foundational math. Others object, saying putting all students on the same path means holding back advanced students.

Another problem is the unequal offerings of calculus and Advanced Placement math courses among California high schools, the new state study co-sponsored by Just Equations found. That can result in difficult splits in college classrooms between the ill-prepared and those already familiar with calculus.

At the college level, the report suggests smaller calculus classes; more co-requisite classes, which add an hour or two a week for extra review and homework help; and more active group learning rather than just lectures and tests. It advocates tailoring calculus for majors such as biology, engineering or economics and using more relevant real-world problems.

At Cal State Los Angeles, the 28 students in Melendez’s class were mainly engineering majors who had finished a summer pre-calculus course. The fall course entailed four hours of regular class a week and an extra two hours a week for review. Trios of students stood at the board to present solutions to assignments and, like contestants on a quiz show, received applause. For example, one question involved the changing rates of water levels as a cylinder-shaped swimming pool was being filled up.

Before these course changes, Calculus 1 failure rates at CSU Los Angeles were above 40% in 2018 and then improved in 2020, falling to 17% last summer. The reported drop may not be a reliable indicator, faculty say, because it came during the pandemic when many fewer students tackled the courses. And the switch to online learning might have allowed cheating by sharing answers or looking up answers online.

“I believe if you teach calculus like you would teach a lecture class in a law school, then you will fail,” he said. “Calculus is more like sports, something you learn by practicing little by little, with continuing coaching and working with peers. That is how you learn baseball and how to play the violin.”

Freshman electrical engineering major Alejandro Duran said he was worried at first about Melendez’s calculus class because his athletics schedule too often took him out of high school senior year pre-calculus class. Calculus “is a little scary. It is actually hard and difficult to learn even with all the resources,” Duran said.

Duran, first in his family to attend college, felt the university’s summer pre-calculus course “got me more prepared.” He “struggled a bit” at the start of fall semester but now expects to receive a good grade.

His classmate and fellow electrical engineering major Sergio Arredondo agreed that the summer class bolstered algebra skills and “took my fear away.” Arredondo also praised the vibe of classmates working together for calculus success. “We came in here not knowing one another, and now we all know each other. We know our strengths and our weaknesses,” he said.

At CSU East Bay, calculus failure and withdrawal rates have been cut to 19% last spring from 33% three years before.

East Bay used grants from the National Science Foundation and the CSU Chancellor’s Office to re-envision calculus, emphasizing active learning and faculty collaboration. For problem-solving, examples are pulled from other STEM disciplines as well as “real life.” Professor Jesús Oliver, who is co-leader of a team of calculus faculty, uses rising housing and rental prices as one example of changing rates and acceleration.

Without watering down material, CSU East Bay seeks to create a less threatening atmosphere for students who might be anxious about calculus, Oliver said: “It is possible to increase student success and engagement in a pretty dramatic way.” However, he emphasizes that there is no single “magic bullet.”

Many new Cal State East Bay students “struggle with foundational and essential algebraic skills,” according to CSU East Bay Math Department chair Julie Glass. But rather than shut them out altogether, the reformed calculus classes try to strengthen those basic math skills while teaching the more advanced calculus topics, she said.

For example, an assignment might give separate credit for showing understanding of a calculus concept, setting up and explaining a problem, rather than awarding credit only for the final answer. This allows students to learn from the problem-solving process, she said. “It is not the case that students don’t need to use algebra. Rather, it is not the main purpose of the assessment,” Glass said.  Then students are shown the algebra calculations and how “to rebuild these skills in the context of their calculus class.”