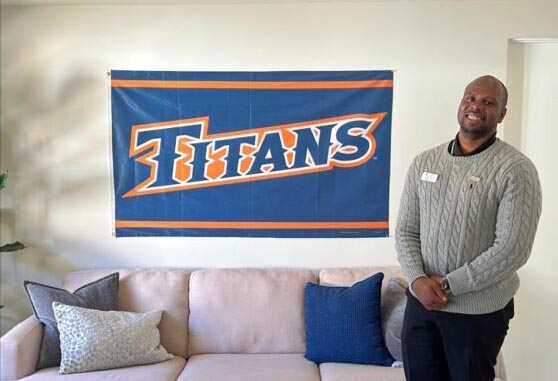 It’s been Jimmie Conner’s home for nearly three years as he works toward his bachelor’s degrees in sociology and business. It is official university housing for up to nine students but was founded and run by Project Rebound, a campus-based student program dedicated to helping students meet their goal of graduating from the CSU system upon their release from prison.

Such a housing option is rare for students with an incarceration experience, and the John Irwin House, named after the program’s founder, is believed to be the first of its kind in the country. Given its success, Project Rebound programs at other campuses, like CSU Sacramento and CSU Fresno, are looking to soon open similar housing initiatives.

“I have aspirations of obtaining a degree and living a different lifestyle, but that’s hard to accomplish when you live in an environment that is not conducive to wanting to see you succeed or without the tools necessary for you to build out a better future,” said Conner.

Like many of the students who join Project Rebound, Conner, who grew up just a few miles west in Compton, learned about the program while in prison. At the time, he was enrolled at Cuesta College in San Luis Obispo where he was being held at California Men’s Colony.

“Project Rebound is advocated heavily in prison,” said Conner, who was recently eligible for a Pell Grant and paid for his academic materials through that funding. “Contact with Project Rebound is like your best chance of getting assistance enrolling into a CSU.”

Upon being released, he completed his transfer requirements at Los Angeles Trade Technical Community College and was accepted into CSU Fullerton.

But not all students learn about the housing opportunity in prison. Sergio Torres found Project Rebound by chance.

He couldn’t afford to attend the CSU Fullerton orientation in person, so he attended online. As he scrolled through the website, a description of Project Rebound caught his attention and he called to learn more.

“That’s probably the best call I’ve ever made,” said Torres.

Prior to the pandemic, 1 in 10 CSU students were facing housing insecurity, including homelessness. Access to secure housing can be further challenging for students who have been incarcerated due to a lack of credit history, gaps in employment, criminal records and more.

He went on to live at the John Irwin home for about three years as he completed his undergraduate degree. Since then, he has secured his own apartment, gotten married, was accepted into a master’s program, and now works as the housing coordinator for the home he once lived in.

“By living in that house, I was able to rewrite my story,” he said. “I certainly would not have accomplished as much as I did in my time there, and that’s because it took me out of the environment I was in and placed me in a beautiful home with all the resources that I needed to be a successful student.”

The program’s success is illustrated by maintaining a statewide recidivism rate of less than 1% between 2016 and 2021, meaning that the great majority of the students who enroll in the program do not return to prison, according to the program’s most recent annual report. By comparison, California has averaged around a 50% recidivism rate for the past decade.

“Our students don’t turn back to prison because education opens the eyes of individuals, and having a safe space to live is crucial,” said Aaron Michael Greene, director of Sacramento State’s Project Rebound and a graduate of the program.

Over two-thirds of Project Rebound students, who range in age from 25 through 44, maintain a 3.0 or higher GPA, and the number of students in the program proceeding to graduate studies within the CSU has more than tripled in the last three years, according to the program’s annual report.

“We’re supporting some of the most marginalized, underrepresented groups in the [CSU] system, and their academic performance really just speaks for itself,” said Brady Heiner, executive director of the Project Rebound Consortium.

Project Rebound was founded in 1967 at San Francisco State. With a mix of philanthropic, state and campus-based funds in recent years, it has expanded to 14 CSU campuses, with plans to include two additional campuses in the next 18 months.

The program has seen exponential growth since 2016 when it secured seed funding from several foundations, followed in 2019 with $3.3 million in state funding. At the height of the Covid-19 pandemic, the program received a one-time $5 million state grant to not only assist students with immediate financial needs related to the pandemic, but also purchase a home in Fullerton and set aside funds for similar housing initiatives at Sacramento State and Fresno State.

At Sacramento State, there are at least seven students on the housing waitlist, but the process of purchasing a home is complicated and requires finding space for eight to 12 students, searching through what’s available on the market, and finalizing the timeline for accessing allocated funds.

As the director, Greene is helping to lead the housing initiative there, and it’s an option that he said would have made his life much easier when he was a university student himself.

He learned about Project Rebound in prison, but upon being released in 2015 he was sent to Fresno County because the terms of his release required being sent to a county where his family lived. At the time, Project Rebound had yet to expand beyond San Francisco State. He stayed in touch, however, and got early word of the Fresno State program.

But the housing aspect of the program doesn’t exist there, so he struggled to secure a home for himself and his two children while in school. He got lucky after a former professor rented him a three-bedroom apartment at a very low rate, but he said he wouldn’t have graduated without that option.

Greene has since earned bachelor’s and master’s degrees in psychology and is now the director of Sacramento State’s Project Rebound.

Increasing housing initiatives through Project Rebound would be life-changing for many, he added. “It’s transformative; it doesn’t just affect the individual who is actually receiving the education and making a change in their life, but it also affects the family,” said Greene, proudly noting that his children, despite both parents having gone to prison, are currently university students themselves.

“We try to really help remove barriers and help with systems navigation and admission support, and once we do that, our students — they’re hungry for opportunity and they’re grateful for support and access because many of them have been dreaming about these opportunities for many years in cages,” said Heiner, who previously led the program at CSU Fullerton.

In 2016, Romarilyn Ralston was hired to develop Project Rebound at the Fullerton campus. She soon received multiple letters from incarcerated men who were not only interested in enrolling at CSU Fullerton but also needed housing.

That’s when the housing idea was born. Her team visited homes that other organizations provide, such as the Anti-Recidivism Coalition and A New Way of Life, worked with a group of Scripps College students who conducted research on other re-entry housing models, and created focus groups — all to learn what made re-entry homes successful and apply that to an academic environment.

By late 2018, Ralston and her team had rented a home in Fullerton that housed up to six students plus a housing coordinator. That coordinator was James Cavitt, who goes by JC and at the time was in the final year of study for his bachelor’s degree in sociology.

“Part of what makes our housing initiative so successful is that it’s student-centered first,” said Cavitt, who is now working toward a marriage and family therapy doctorate degree. “Everything from the layout and design of the house is very intentional, and making sure the color scheme of the house doesn’t resemble that of correctional spaces.”

How long a student lives there depends on their needs and room availability. Plus, each student must go through an interview and screening process to ensure they get along with all other housemates and remain committed to the mission of furthering the careers of everyone in the home.

Every student is required to work, pay rent and save money. Some students have on-campus jobs funded through their financial aid package, others work for Project Rebound, and some work off-campus. Project Rebound takes 30% of each student’s monthly income, so the rent each student pays depends on what they earn at work. The program then takes 33% from that monthly rent and deposits the amount into a student savings account set up by the university.

When a student is preparing to move out of the John Irwin home, they receive a check with the amount in their savings account in order to pay for an apartment’s security deposit, first and last month’s rent and other basic necessities for living on their own.

“We wanted to create something that was not available. We didn’t want our students to live in anything like we had experienced,” said Ralston. “We want people to wake up and know that they’re in a safe space where they can thrive and see the possibilities of their future.”