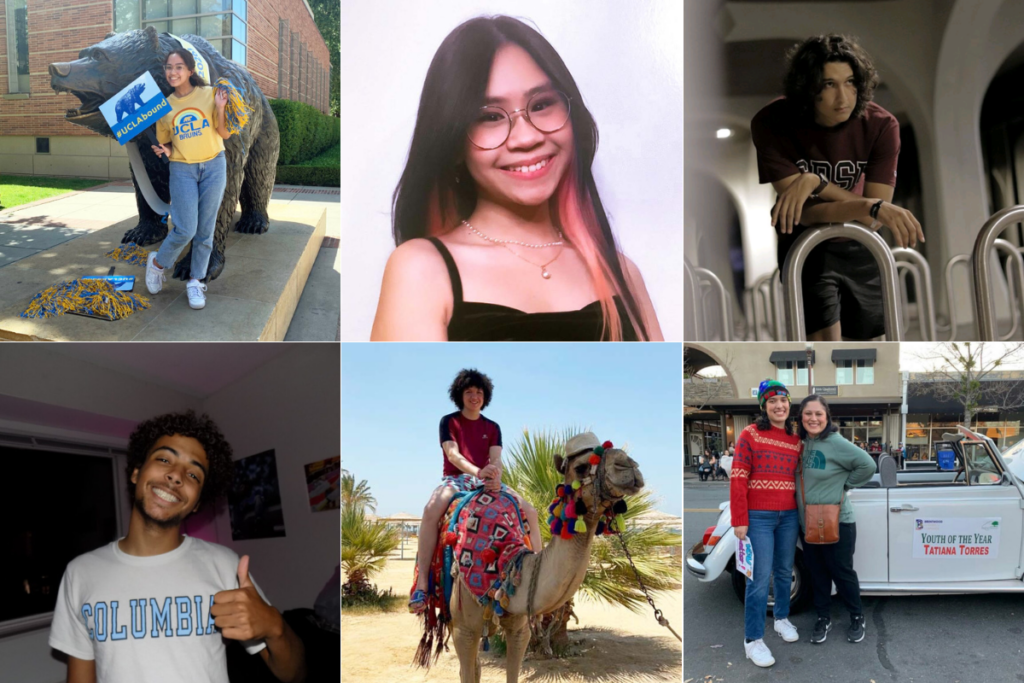 First-year college students started this school year with a lot stacked against them.

On top of moving away from home for the first time, many had to face a tough reality: Covid robbed them of learning, especially in math, after more than a year of attending high school from home.

San Diego State freshman Victor Contreras fell behind in math in high school during the pandemic and is still struggling with it in college. Taking calculus online as a senior at Cosumnes Oaks High School in Elk Grove ruined math for him, Contreras said.

“One year of math taken away,” he said. “I never got back into it.”

Before the pandemic closures, Contreras said he earned mostly A’s and B’s in math. After returning to in-person instruction in high school, his math grades dropped to mostly C’s and D’s.

UC Berkeley freshman Jennifer Tran has a front seat to the academic troubles of her peers as a student representative on the university Academic Senate’s Admissions, Enrollment and Preparatory Education Committee. First-year students are struggling to catch up academically after the pandemic, individually and as a group, she said.

“Students are really, really behind in terms of curriculum,” she said. “What was considered a lower-level math class is now the norm for what is considered difficult for UC Berkeley students,” she said.

This is the third in an occasional series on the Class of 2022, students’ experiences through Covid and their plans for the future. Join EdSource as we follow these 12 students into career or college and tell their stories.

“Berkeley is having to make up for what students didn’t learn in high school,” she said.

Berkeley’s first-year students are being surveyed online to determine where they have knowledge gaps, according to Janet Gilmore, a university spokesperson. Along with tutoring, Berkeley has started a three-week math review program in the summer and winter to prepare students to take introductory math courses.

“We are seeing that math and other subjects that are more linear, where content builds on other content, can be a struggle for those who missed pieces during the pandemic,” she said.

Frey and other university officials began talking about remedies to learning gaps early in the pandemic. The problem wasn’t just with incoming students: Those who missed school because of Covid-19 were being impacted as well, she said.

The university also began offering review videos to students enrolled in math classes to ensure they know all the prerequisite information needed to understand the new concepts being introduced in their classes each week.

Interventions on the nine undergraduate University of California campuses vary and are determined by each campus.

California State University announced last month that it will update its Early Start program with the goal of preparing at least 90% of first-time students to complete communications and math general education classes successfully in their first year, said Michael Uhlenkamp, a spokesman for the university. The program helps high school students prepare for college-level math and English classes before enrolling at the university.

Payton Zarceno, who is majoring in biology at UCLA, was a little surprised to discover how difficult her biology classes are at the university.

The classes have the same content as her high school courses, but are much more in-depth, she said.

“There are moments I say, ‘Oh my gosh, why didn’t I change my major to something easier?’” she said.

Gannon Peebles, a self-proclaimed math nerd who attended Edison High School in Fresno, isn’t struggling with math at Columbia University in New York, but he says that isn’t true of many of his classmates.

Peebles says all of his coursework at Columbia is challenging, but distance learning in high school helped prepare him academically for a university that requires students to be independent.

“In college, they don’t wait for you to understand like in high school,” he said. “I have to learn it on my own, outside of class time.”

The math and computer science major, a straight-A high school student who is at the university on a full scholarship, wasn’t really too concerned about whether he would perform well academically at Columbia when he arrived. So, he continued his high school habit of doing homework, with no additional studying outside of class. His grades dropped slightly, and he quickly changed his habits.

“My high school self would say, you got a B and you have to step it up,” Peebles said. “It’s very competitive. Everyone here wants to be the best of the best.”

Coping with Covid and flu

Peebles and his classmates at Columbia also have been struggling with illness since school started in September. The university dropped its mask mandate after the first month of the school, he said.

“I don’t think I’ve gone a week and not been sick,” Peebles said in early November.

Everyone at UCLA also seemed to be sick the first few weeks of school, Zarceno said. “Everyone was partying.”

She and her two roommates agreed not to bring anyone into their dorm room during the first two weeks of school because of the outbreaks. After that, they agreed to gain permission from the other two before allowing others in the room.

Zarceno had been concerned about contracting Covid-19, as well as general cleanliness, when she moved into the dorm, but relaxed when she saw her roommates also had packed Clorox wipes and assorted sanitizing sprays.

Tran reports a back-to-normal culture on the Berkeley campus, with most students forgoing masks, although most wear them on public transit. As the semester wore on, their biggest worry was the flu.

She had wanted to go to school on the East Coast before the pandemic but decided to stay a little closer to home as it progressed. Berkeley is an eight-hour drive or a one-hour flight from her Garden Grove home in Southern California.

“I think that the first instinct so many students are experiencing, after COVID-19 and isolation for two years, is to move as far away as possible,” Tran said earlier this year. “While valid, this is a reaction that some may come to regret sticking to, and I realized I would have regretted.”

Many students decided to stay home and to attend community college. American River College student Tamiya Williams is living in Sacramento with her parents. She isn’t ready to move out quite yet. She felt enough anxiety and depression during Covid-19 shutdowns to see a therapist. Returning to school has brought new anxiety.

“There is more pressure,” she said. “I felt like going to high school I didn’t have to work, now I work and go to school and make sure my grades don’t drop because of nursing, and maintain happiness and put myself first.”

Williams, who hopes to earn a spot in one of the competitive nursing programs at a California State University campus, attends school in person and online and runs a small online business that sells body butters, scrubs and other personal care products.

“I got used to classes online. In person, I get more social anxiety,” she said. “I wanted to balance it out.”

Williams says she is earning straight A’s in her college courses, although she expects finals to be challenging.

Fellow American River College student Miles Fu is finding community college isn’t much of an improvement over high school distance learning. He enrolled in college late and ended up with two classes on campus and two in distance learning. A psychology class is entirely videotaped with no Zoom instruction, he said. The teacher doesn’t show her face, he added.

“I tried to get into it and there was no connection at all,” he said. “… I have to at least see their face and know they exist.”

Fu, who aspires to be an environmental journalist, hopes to move from Sacramento to Cal Poly Humboldt or UC Santa Cruz when he completes two years of community college.

Tatiana Torres attends Los Medanos College in Pittsburg online and in hybrid classes. Torres is used to studying from home. She spent a few years before the pandemic studying from home after an accident in middle school left her with persistent headaches and sensitivity to light.

After another year of studying from home during the pandemic, she is determined to take part in as many on-campus clubs and functions as she can. In October, Torres dressed as a Hogwarts student (from the Harry Potter series) and helped students with pumpkin painting at a table at a club’s Halloween party.

“I forgot how much I do enjoy talking to people and hearing their stories,” she said.

Some members of the high school Class of 2022 haven’t yet decided which path to take. Moussa Owaidat is working in a fast-food restaurant and saving money for his future.

The Konocti Unified graduate is torn between applying for a government job and attending community college. He’d like to go to college in Santa Rosa but can’t afford to move away from his family home in Clear Lake, he said.

Along for the ride

Despite the struggles facing the newly minted adults, most are embracing college life. They are learning new things, meeting new friends, testing their independence and learning to balance school and social lives.

Nicholas Harvey has filled his calendar with mixers and panel discussions. He also meets weekly with students at another dorm at Stanford University to practice Italian and enjoys late-night student study sessions over quesadillas, burritos and tater tots at a campus dining hall.

Peebles has joined several on-campus clubs at Columbia University and immersed himself in New York City, attending concerts, going to clubs and seeing the sights.

Contreras, a graphic arts major and avid bicyclist, is riding around the campus, the city and the coast soaking in all that San Diego has to offer. But he still misses home.

“It was all I expected,” Contreras said of his move to San Diego. “I guess I didn’t expect to miss Elk Grove. Sometimes I’m walking around campus and biking around campus, and I think – how did I get here? This time last year I was at home. Now I’m in San Diego. Last year I was with friends in Elk Grove doing nothing. At this point last year I didn’t know where I was going and what I was doing. Now I’m here. I’m along for the ride.”