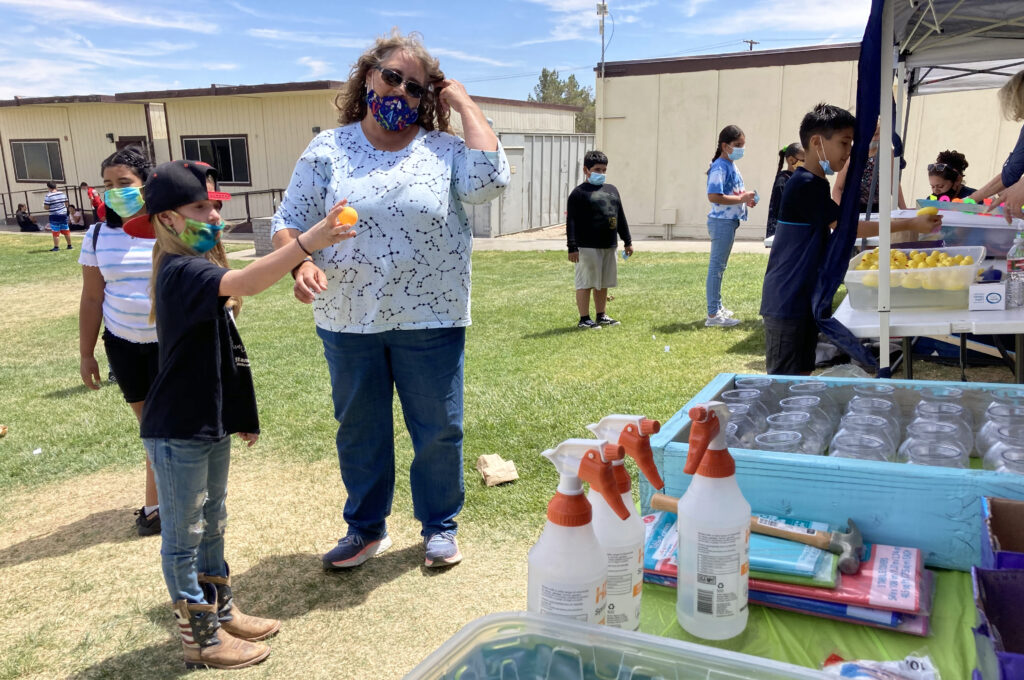 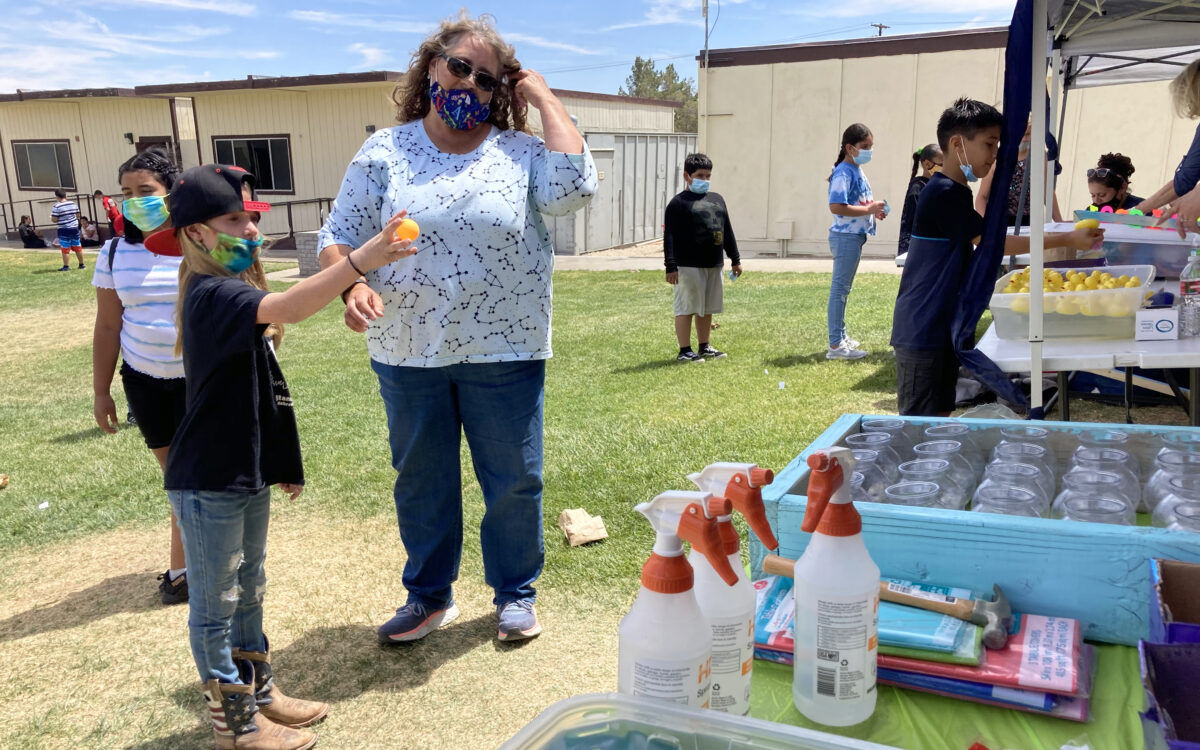 Credit: Courtesy of SARAH COURTNEY
A student at Lucerne Valley Elementary aims to sink a ping pong ball into a glass jar at the school's end-of-the-year carnival.

Credit: Courtesy of SARAH COURTNEY
A student at Lucerne Valley Elementary aims to sink a ping pong ball into a glass jar at the school's end-of-the-year carnival.

Gov. Gavin Newsom’s school vaccine mandate is at least five months away, but some school boards, particularly those in small, rural, mostly conservative areas of California, are already saying they won’t enforce it.

The vaccine mandate, meant to slow the spread of Covid-19, will prohibit unvaccinated staff and students from coming onto school campuses for in-person instruction, although students can enroll in independent study. The executive order is expected to go into effect July 1.

Since the announcement in October, school boards for districts like Mark Twain Union Elementary School District in Calaveras County and Oakdale Joint Unified in Stanislaus County have passed resolutions saying they will defy the state mandate. The school board of the Happy Valley Union School District in Shasta County did not pass a formal resolution, but voted 4-0 on Oct. 12 “to refuse to comply with non-voluntary Covid-19 vaccine mandates now or in the future,” according to board minutes.

Officials from other districts, like Lucerne Valley Unified and Hesperia Unified in San Bernardino County and Calaveras Unified in Calaveras County, also have indicated they may allow unvaccinated students to come to school for in-person instruction after the mandate takes effect.

Soulsbyville Elementary School District in Tuolumne County initially passed a resolution stating that it would not enforce the vaccine mandate, but the board rescinded it after its insurance provider, the Tuolumne Joint Powers Authority, informed the district it would not cover any future claims related to Covid-19, according to the Union Democrat. The resolution also would have made masking optional.

School boards that defy state mandates are putting their state funding and liability insurance in peril, and trustees could face fines or jail time for ignoring the law, according to lawyers and insurance providers.

How the state will enforce the vaccine mandate remains to be seen. The role of the California Department of Education could be limited to reducing funding if external audits show a district didn’t meet state immunization requirements. The California Attorney General’s Office or a local district attorney’s office could prosecute individuals if they ignore the law, said Leslie Jacobs, a University of the Pacific law professor.

The California Department of Education is “taking this matter seriously,” but hasn’t sent any letters to districts that intend to defy the mandate, department spokesman Scott Roark said via email.

School board resolutions against the vaccine invoke similar arguments. Most say that parents should decide whether their children are immunized, districts should be able to make decisions like this based on local conditions and that the mandate discriminates against people of color because they have lower rates of vaccination, among other things.

Lucerne Valley Unified’s school board was one of the first to pass a resolution proclaiming its opposition to the mandate, although it stopped short of refusing to adhere to it. The resolution states that the mandate would infringe on parental rights and the rights of students to a free public education, that children are at lower risk of dying or getting seriously ill from Covid-19, and that people have the right to deny unwanted medical treatment, among other things.

Since March 2020, when schools were closed in response to the pandemic, the deaths of 51 California children 17 and younger have been associated with Covid-19, according to the California Department of Public Health.

The Lucerne Valley Unified six-page resolution also questions the district’s legal authority to mandate vaccinations because the Covid-19 vaccination is not included in the list of 10 vaccinations already required for children to attend school in California. That could change soon. Sen. Richard Pan, D-Sacramento, announced recently that a newly introduced bill would add the Covid-19 vaccine to the list, eliminating the personal belief exemption and adding oversight to those who issue medical exemptions for it.

Superintendent Peter Livingston said the district will follow the state vaccine mandate, but followed that statement by saying that he would allow unvaccinated students to come back to school if a large number of students don’t get vaccinated.

“If the mandate is implemented in 2022-23, half of our students won’t comply with it,” Livingston said. “I can’t let them sit at home and do nothing.”

Hesperia Unified Superintendent David Olney said the district’s school board passed a resolution opposing the state vaccine mandate and supporting personal belief exemptions, but district officials haven’t decided whether they will enforce the vaccine mandate when it begins.

“We will cross that bridge when we come to it,” he said Tuesday.

Mark Twain Union Elementary school board President Jenny Eltringham also said she expects half of the district’s students will leave school if the mandate is enforced. She is more concerned about parents “yanking their kids out of school” than about losing state funding or being fined.

“You can’t run a school with no kids,” Eltringham said. “Parental choice, that’s what I’m for.”

Although parents have threatened to pull their children from public schools if the vaccine mandate isn’t rescinded, it’s not clear where they would attend school. Charter and private schools offering on-site instruction are also subject to the vaccine mandate. Virtual schools could be an option, but spots are limited because the state has put a temporary moratorium on opening new virtual charter schools. The only other option for parents would be to home-school their children by filing a private-school affidavit with the state.

“We’ve had quite a few cases, but the children come out of it, you know,” she said.

Ignoring state mandate could be costly for districts

School districts that eschew state mandates could have more to worry about than state funding. Most California school districts’ insurance policies do not cover lawsuits or other losses if someone contracts a communicable disease. Districts with insurance policies that do cover that could still be at risk of losing coverage for infections and lawsuits related to Covid-19 if they ignore state mandates and allow students and teachers to go to class without being vaccinated or wearing masks.

“Generally speaking, if you intentionally break the law you can’t count on insurance to cover the consequences,” said Cindy Wilkerson, executive director of Schools Insurance Group, a joint-powers authority that insures 30 school districts in Northern California. “We aren’t unique in this. The coverage exclusion is probably in every coverage document or insurance policy.”

Almost all school districts in California are part of a joint powers authority that allows a group of districts to pool their risk and insure themselves. Each board is made up of representatives from member school districts. Many of these groups have sent letters to districts warning that snubbing state mandates, including those requiring masking and vaccines, could leave those districts without coverage if someone gets ill and files a lawsuit.

In a letter to members last year, Wilkerson advised school officials that if they don’t follow state, federal or local mandates, districts would likely have to pay their own attorney fees and any possible judgments that occur as a result of a lawsuit.

Wilkerson recommends that districts collaborate with their legal counsel and local public health officials to decide how they can remain in compliance with California Department of Public Health guidance. She hasn’t been informed that any of the districts covered by the Schools Insurance Group intend to ignore the vaccine mandate.

Last year, Assemblymember Patrick O’Donnell, D-Long Beach, attempted to pass legislation that would have exempted school districts and their employees from liability and damages due to Covid-19 infection as long as districts established health and safety policies and procedures consistent with federal, state and local requirements. The bill did not pass.

The decision to ignore the state mandate also could affect a district’s workers compensation coverage if members of the staff contract the disease at work. Districts could also lose coverage for Covid-related actions like discrimination, wrongful termination and failure to educate, said Doug Ross, vice president of Keenan & Associates, which manages the Regional Liability Excess Fund and other joint powers authorities that provide insurance to school districts.

“I think if school district leadership blatantly disregards state and local guidelines and directs their employees to do the same, it definitely could compromise what coverage they would otherwise have available,” Ross said. “However, if an employee simply forgets to do something, or is unclear on what the requirement was, and an otherwise covered loss occurs, insurance would still cover it.”

The Regional Liability Excess Fund serves 442 California school districts. It also is recommending that its members follow state mandates. Ross said he hasn’t been informed that any of the districts covered by his organization intend to disregard the state vaccine mandate.

School board members could open themselves up to lawsuits, be charged with a misdemeanor and be fined up to $1,000 each or receive jail terms of up to six months, or both, if they willfully fail to follow the state’s public health order, Funderburk said in the letter. She also warned that school districts could lose both state and federal funding if officials fail to comply with the governor’s order or any new legislation that adds the Covid-19 vaccine to the list of required immunizations.

An analysis of the potential liability Calaveras Unified could face if it failed to follow the state mandate was spelled out similarly by Lozano Smith, a Sacramento law firm. Along with opening itself up to lawsuits, it said the district could face fines and penalties issued by the Division of Occupational Safety and Health or public health officials. Better known as Cal/OSHA, the division is the state agency that sets and enforces workforce safety standards.

“The most damaging thing a school district can do is to go on record at a public school board meeting or elsewhere explicitly stating that the district will not follow or enforce the law,” states the analysis. “Schools that do not follow executive orders, public health orders and public health guidance are likely to be targets of litigation. Given that most or all school districts do not have insurance coverage for infectious diseases, the potential liability is very high.”