Dual enrollment: who’s in, who’s out?

Above: Daylarlyn Gonzalez organizes a class project among freshmen at Arvin High taking a dual enrollment course through Bakersfield College.

Faith Serna said it was hard to picture herself going far from home for college before she took college courses at her high school, Wonderful College Prep Academy, a charter school in Delano. Now that she is in the home stretch of graduating from high school with an associate degree, she has her sights set on attending college at the University of California or a private college.

“Now I’m not scared to enter college,” she said. “It’s made me more comfortable.” 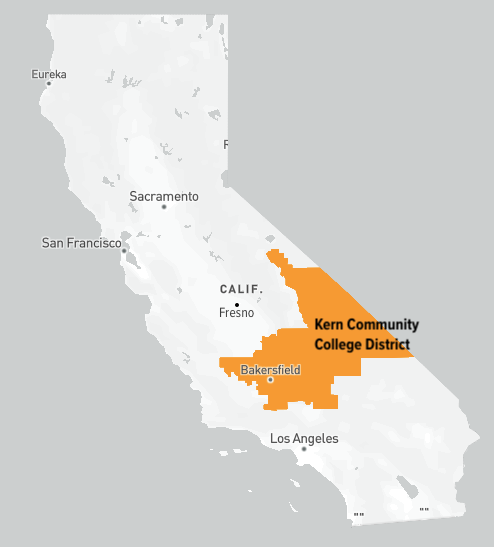 For many who live in the area served by the Kern Community College District, college can feel far away — and it is. The district sprawls over a region larger than West Virginia that encompasses the San Joaquin Valley, the eastern Sierra and the Mojave Desert. It is served by just one public university, Cal State Bakersfield. High school seniors in this district are less likely to attend college than most in the state.

“We are not a college-going county,” said Kylie Campbell, the director of dual enrollment programs for the college district.

Enrolling high school students in college courses encourages all students to see themselves as “college material,” she said. The district targeted dual enrollment courses in rural communities where students were less likely to be college bound.

The dual enrollment program is notable not only for its sheer size but for its success in enrolling high numbers of Latino high school students.

Dual enrollment has been increasing across California over the past six years, but who enrolls in those college courses varies across the state. A recent EdSource analysis of community college dual enrollment programs found that most districts are enrolling a lower percentage of Black and Latino students than are attending the high schools within their boundaries. Fifty-nine of the 72 districts analyzed had a lower percentage of Latino high school students.

Though dual enrollment programs are present at most high schools in the district, Campbell credits the district’s success to starting the program in the rural, Latino communities of Kern County.  In California, 35% of adults over 25 hold a bachelor’s degree; in Kern County, it’s 17%.

This is the second of three stories on the growth in California of students earning college credit while they are in high school, a program known as dual enrollment. An EdSource analysis shows that not all students have access to these courses.

This interactive map shows each community college district and how closely the students enrolled in these programs reflect the demographics of their feeder high schools. To create the map, EdSource compared 2021 California Department of Education high school data to California Community Colleges data on dual-enrolled students to determine student representation by racial and ethnic groups.

Going to college qualifies as an extraordinary feat in Arvin, a small, mostly Latino agricultural town at the base of the San Joaquin Valley where just 2% of adults have a bachelor’s degree.

Professor Helen Acosta teaches freshmen at Arvin High how to research and speak with confidence in college-level public speaking courses. She notices that the message her students get about college is vastly different from what she heard growing up as an “average white kid” whose parents went to college.

In 2015, the Kern district began to roll out dual enrollment programs as a part of a larger push into rural communities. The goal of this effort, called Rural Initiatives, was to bring college directly into communities, such as Delano, Arvin, McFarland, Wasco and Shafter, where college-going rates are especially low and bachelor’s degrees are rare. One way to do that was to bring college onto high school campuses. Today dual enrollment has its largest presence on rural campuses where students opt for a range of courses from skills training to liberal arts.

High school students can complete an entire associate degree, which requires 60 units with a minimum GPA of 2.0, without leaving their high school campus. They typically do so by taking a combination of classes during the day, after school and during summer. Some of these courses earn students high school and college credit simultaneously.

These are largely agricultural communities where the student population is almost entirely Latino. Most students’ parents speak Spanish and did not attend college. Poverty rates are high — in Arvin, it’s 32% and in McFarland, it’s 29%, per census data — and many students feel pressure to start earning a paycheck quickly.

Many see dual enrollment as a path to a better life. Money is tight in Serna’s family of six girls supported by her dad, a truck driver.

Taking college courses early can also have an immediate effect on the way students see themselves. Serna said that college-level courses, like history, have opened her mind in ways that high school-level classes haven’t. Courses in leadership and agricultural business have helped her become more confident and better at communication.

Enrolling in college courses instills a strong sense of pride among students who are the first in their families to attend college.

Daylarlyn Gonzalez took one of Acosta’s courses in her freshman year at Arvin High. She laughs as she describes the course as “torture.” She said she pushes through knowing that it will pay off in the future and make her family proud. But just one semester in, she said feels like she is growing already.

“These classes make me go at a higher level,” Gonzalez said.

Dual enrollment students are entering the workforce in Kern County. Brianna Zatarain graduated from Cal State Bakersfield this spring in just three years — an achievement she credits to college courses that she took in high school. During the school day, Zatarain and her classmates at Robert F. Kennedy High School in Delano would walk next door to Bakersfield College’s satellite campus to take college courses.

Zatarain is now a reading assistant at an elementary school in nearby McFarland. She’s working on her master’s degree in education when many of the students who began college with her still haven’t completed college.

“Taking dual enrollment classes helped me get ahead of the game,” Zatarain said.

On track to earn a degree

As dual enrollment was first rolled out in high schools, college courses were limited and demand was high. But with each passing year, high schools in the Kern Community College District are offering more college courses layered throughout the high school curriculum and more pathways to obtaining an associate degree or certificate.

Serna and her older sister took classes on the first dual enrollment pathway offered at Wonderful College Prep Academy, an associate degree in agricultural business, but she is pleased to see that her younger sisters will have more options, such as education and health care. She’s also glad that there will be more spots on these pathways available. Demand outpaced slots, which made the process to get onto the pathway competitive.

Campbell said the community college district strives to make sure that offerings are not reserved for honors or exceptional students. But putting that principle into practice is a tricky balance, especially when there are more applications than seats.

“I don’t think anyone has that answer: How do you get away from tracking, open it up to all students, but also ensure students are successful?” Campbell said. “If anyone has that unique formula, I’d love to hear it, but we’re trying.”

Appealing to students outside of the honors track is key to improving college-going rates in the community.

“They’re bored of what high school has to offer them,” Campbell said. “Getting started on college is the best thing to do, so they don’t burn out and not continue after high school.”

Courses are designed to avoid locking out students with prerequisites. The community college aims to admit students who are interested in the programs — whether that’s industrial automation or the liberal arts.

“It’s really more about that ambition and their plans for themselves,” Campbell said.

Because the district is trying to keep the courses as accessible as possible, college counselors are key. They check in to make sure students are continuing to get good grades in their high school classes, as well as their college courses.

Promotion is a key part of ensuring dual enrollment is offered equitably. Arvin High heavily promotes dual enrollment opportunities to the parents of freshmen through its Parent University program, said Ed Watts, the principal. It works: Freshman dual enrollment students at Arvin overwhelmingly said it was their parents who pushed them to sign up.

“It’s now gaining momentum, because we’re in year six of it, so the community knows it’s here now,” Watts said.

Since 2015, the Kern Community College District has added more dually enrolled students than any other district in the state, and it plans to keep on growing.

Having enough high school teachers qualified to teach dual enrollment courses is crucial. The newly created Kern Regional K-16 Education Collaborative will be key, said Ryan Coleman, director of education services for the Kern High School District. The collaborative, modeled after a similar program in Fresno County, will provide tuition and mentorship for two groups of 25 teachers to receive their master’s degrees in their content area — particularly English, math and science.

Satellite campuses — such as the one Zatarain attended in Delano — have also been a boon for dual-enrollment efforts. A crosstown campus in Bakersfield opened in spring and serves as a major hub for dual-enrollment courses. A campus is slated to open in Arvin in fall 2024.

The pandemic hit Arvin and its students hard, which caused a decline in dual enrollment, said principal Watts. But he said the future of dual enrollment is bright. Teachers are working on their master’s degrees, which are required for them to teach the college courses. When the satellite campus opens across the street, Arvin High plans to synchronize its schedule, so students can take courses there. Watts compares the school’s efforts with the Kern Community College District to a proverbial snowball.