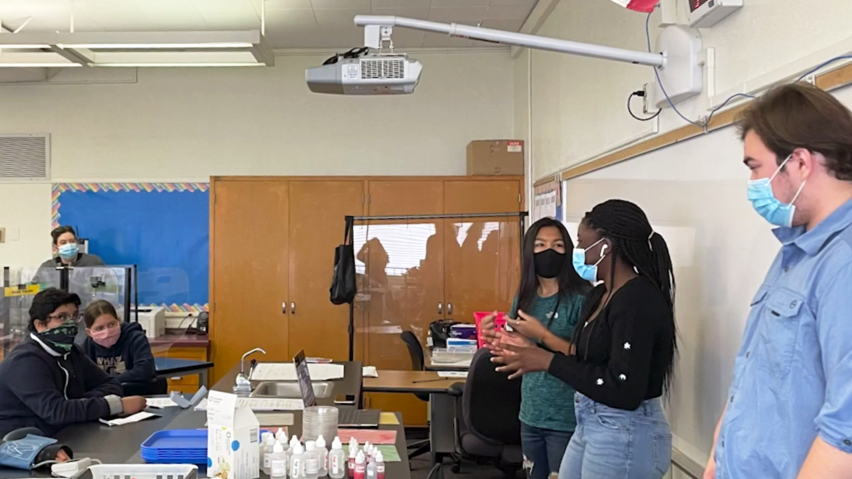 Fresno Unified is among the school districts encouraging students to become civically engaged and in the process earn a seal affixed to their high school diploma that recognizes their involvement. The State Seal of Civic Engagement recognizes not only that students understand the democratic process but also apply their knowledge to address issues or problems they care deeply about in school or the community.

“In a time of rancor, the seal in my mind could not have a greater importance,” Superintendent Bob Nelson said. He spoke last week the morning after the president of his school board shut down a raucous meeting when one board member and a member of the public engaged in a shouting match and a contingent of vaccination opponents showed up to lash out at another board member for posting a sarcastic tweet mocking their views.

“Students must learn to self-advocate for issues they believe in a productive way without harming someone else or impugning the character of someone who disagrees with you,” Nelson said. “Adults are not doing great now at modeling behavior for students.”

Lessons in frustration and success

A year ago, there was recycling in name only at Riverside STEM High School. Just a bin in classrooms for cardboard that was just another trash can. Today, there’s a full-scale operation, with a 20-yard-long dumpster separated for papers, plastics, cans, and cardboard, signs in every classroom, a video on the school’s website and agreements with the district for pickup and recycling that will continue after seniors Joseph Merickel and Adwoa Appiah-Boateng graduate.

Then, as part of the state seal process, the two students sat down and created a sustainable recycling plan. They visited schools in Long Beach and Laguna Beach that had successful award-winning programs and learned from them. The district started listening, and the plan fell in place step by step.

“There was a lot of frustration involved when you have an idea and you want to start it. You wanted to like, go, go, go. (The process under the seal) taught me to be clear in purpose. Change can happen. It’s just really slow because there’s a lot of obstacles that you have to overcome,” said Appiah Boateng.

“We’ve been totally inspired, totally energetic. The seal really helped us organize, put our stuff together, realize our original goals. It really gave us the tools and motivation to keep going,” Merickel said.

The authors of a study that takes a first look at the new program agree with Nelson that despite political tensions, schools and educators can help restore democratic values and norms. Although the state seal is only one tool, “it is an important one with the potential to help renew the democratic purpose of California’s public schools,” wrote Erica Hodgin and Leah Bueso in “Breaking New Ground with California’s State Seal of Civic Engagement: Lessons from Year 1.” Hodgin is program director and Bueso is a postdoctoral scholar with Leveraging Equity & Access in Democratic Education, an initiative at UCLA and UC Riverside.

In September 2020, the State Board of Education approved the state seal, making California the fifth state to adopt a diploma program to honor civic learning. It reflects the shift in civics education from passive to active learning — from reading about how a bill becomes law to picking an interesting community issue, researching multiple perspectives, taking a position and doing something to affect the outcome.

Launched amid a pandemic and remote learning, the program understandably started off slowly. In its first year, 5,369 seniors in the class of 2021 received insignias — a little more than 1% of graduates. And more than a third of those were graduates of one district: Anaheim Union High School District.

Nonetheless, the study’s in-depth profiles of seven districts’ formative efforts to launch the seal found strong commitments and extensive planning that can inform other districts. They include big urban districts (Fresno and Anaheim), a rural district (Chico Unified) and the Orange County Office of Education, with its ambitious plan to extend civic learning and the seal to youths in juvenile hall and in alternative high schools serving disengaged students.

Some projects recognized with a seal point to the potential. Students in Anaheim researched reasons for families’ reluctance to get Covid vaccinations, interviewed them and physicians and did a documentary targeted for the community that the district posted on its website. A Riverside Unified senior received national recognition for her speech on “hostile architecture,” tactics like loud noises and uncomfortable benches to deter loitering and homeless people. Among those presenting projects at Riverside Unified’s first showcase were students who built a greenhouse and recommended changes to the district’s recycling strategy.

The seal was an outgrowth of the 2016 revision of the state’s History-Social Science Framework, which included a chapter on broadening civic engagement both in and beyond the semester civics course mandated in 12th grade. Since then, there have been few signs of change. Hodgin’s organization at UC Riverside concluded after a survey, interviews and examination of websites that 5 million of 6 million students in California attend schools in districts that do not express a substantial focus on civic education.

The seal is intended to stimulate more interest. The requirements that the state board set for it include:

Districts determine who qualifies for the seal and also have the latitude to create local variations as long as they are consistent with the state criteria, Hodgin said. Some districts are considering good grades in history and civics to qualify for a seal, but others are using other ways to measure knowledge of the basics of civics in order to not discourage civic involvement, she said.

“The intent is not to make the seal an exclusive honor; the State Seal of Civic Engagement is meant to be accessible to all students,” Hodgin said. “It isn’t a competition or a race. We really do want all young people to feel prepared to participate in civic life.”

Anaheim, Riverside and Salinas Union High School District have adopted policies that require all students, not just high performers seeking to embellish college applications, be provided an opportunity to do a civics engagement project.

In Anaheim’s guiding philosophy statement, the Career Preparedness Systems Framework, civic skills ­— “cultivating and supporting student voice, identity, and purpose” — are defined as essential to learning. In the first year, nearly half of the graduating class of 4,500 were awarded the state seal, many through senior capstone projects. Three hundred teachers have voluntarily taken a three-day training on civic engagement projects offered by the Los Angeles County Office of Education or by the district, said Assistant Superintendent Jaron Fried.

Three years ago, Riverside’s school board passed a resolution making civic engagement a high priority, and every high school has a plan for it. Students will explore potential research topics in ninth and 10th grades and undertake projects as juniors.  “The goal is to get students involved in communities to make communities better — not just do another class project,” said Carolyn Power, the district’s history-social science instructional specialist.

The Salinas school board included the civic engagement plan in its Local Control and Accountability Plan, the district’s main planning and budgeting document, with funding to pay for training for teachers leading the work. One student from every high school served on the committee that developed the districtwide civic learning plan, and students were deeply involved at the school level.

At one large Riverside high school, teachers in English, history, government and AVID, a college preparation course, are working together to blend civic learning into both the core curriculum and extracurricular activities — and looking for ways to introduce it in math and engineering courses. In Anaheim, teachers in a single department — science in one school, English in another — are guiding the effort.

Fresno High is the “epicenter” of civic learning in Fresno Unified, the study said. All students are required to take at least one course through the school’s international baccalaureate diploma program, where service learning is integral to the curriculum. One staff member would oversee 10 to 20 civic learning projects.

To amplify their work, Anaheim, Riverside and Salinas have contracted with the Chicago-based Mikva Challenge, a nonprofit that supplies curriculum materials and training for teachers for “action civics” programs. It includes Project Soapbox, in which students give two-minute talks after researching the question “What is the biggest issue facing your community, why is it important, and what should be done about it?”

Those three districts and Fresno also benefit from strong university and community partnerships that offer expertise and ties with businesses and nonprofits dealing with issues like homelessness, hunger, immigration and the environment.

But many districts lack this web of connections for mentors, experts and volunteer opportunities. Starting from scratch could be a challenge — especially at a time when districts are inundated with new state initiatives and teachers are bone-weary from coping with Covid. Some county offices of education — Sacramento, Monterey and especially Los Angeles, with its California Democracy School Civic Learning Initiative — are already deeply immersed in civics education and, the report suggests, can help get the seal off the ground.

Another challenge, the report notes, is heightened polarization over politics and issues of race and the perception in some conservative districts that civics is, as one person interviewed called it, a “lefty thing to do.” California hasn’t banned controversial issues in schools, as in some states. But educators are wary of pushback, the report said.

Some counties are creating resources to communicate the purpose of civic learning in nonpartisan, understandable terms, the report said.

“When we talk about controversial issues, it’s not that the school or teachers are going to advance one political perspective. We should be able to learn how to have a productive, respectful dialogue across differences,” Hodgin said.

“We want schools and teachers to be able to support young people to understand multiple perspectives, research issues and learn about evidence so that they can then form their own opinion. Schools are uniquely positioned to be able to prepare young people for civic life,” she said.