Can infants learn math? State-backed pilot project in Fresno aims to find out 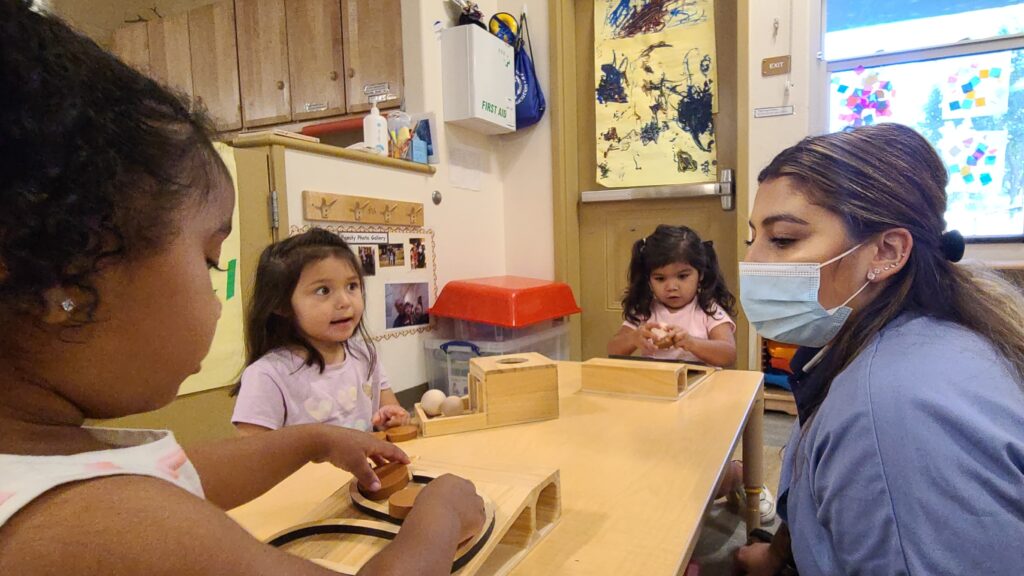 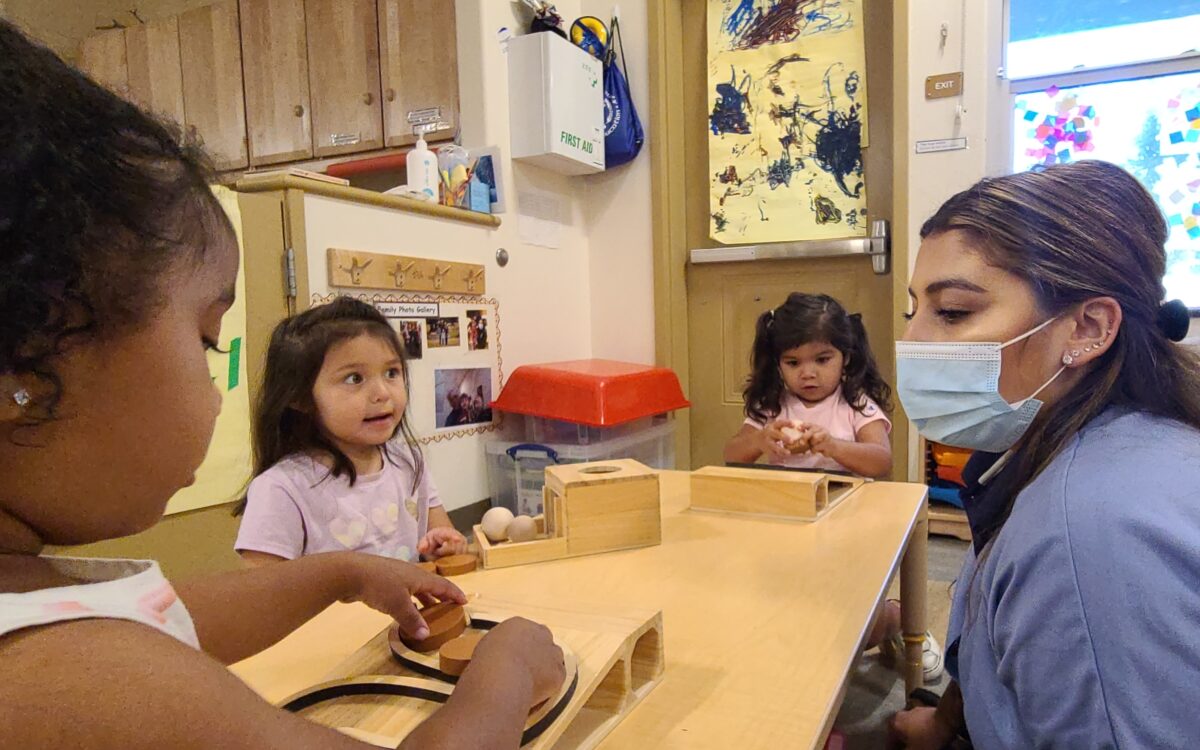 Inside the infant room at the Lighthouse for Children Center in Fresno, 1-year-old Peyton is learning math. As he climbs on top of a short table — a place he shouldn’t be — his teacher tells him, “You’re up on the table.” Then asks, “Can you show me down?” And “Pey-Pey,” as he’s nicknamed, obliges, climbing down to safety.

As teacher Brittany Montelongo is changing the baby’s diaper, she talks him through each step: first they wipe, then a clean diaper goes on. Lastly, Peyton happily helps throw the diaper in the trash.

Montelongo has been teaching at the center in downtown Fresno for six years, but it was only for the last three that she’s been awakened, as she puts it, to see “there really is math in everything.”

She used to think, “Oh, we can’t do math unless we’re sitting down and literally showing them one, two, three, four, five,” she says.

But that was before the Lighthouse Child Development Center became the demonstration site for the California Early Math Initiative — a statewide pilot project aimed at boosting the confidence of early childhood educators, child care providers and elementary school teachers to teach math. The project will hopefully in turn boost math and science outcomes for those children as they get older.

In 2018, the Fresno County Office of Education was awarded $11.2 million from the state to develop a training model for those who care for children from birth to 8 years old. This summer, Gov. Gavin Newsom approved $35 million until June 2027 to continue the project, which will move into its second phase to further its reach into school districts, preschools and child care centers.

Listen to Master Teacher Brittany Montelongo use math language in the infant classroom at the Lighthouse Center for Children.

More than 50% of students in the state are not achieving statewide math standards, according to a 2019 report by the Public Policy Institute of California, making it difficult to prepare for college success. Some studies have shown that preschool mathematics knowledge can predict achievement into high school and is a strong predictor of later success.

EdSource · Math for babies and toddlers

“It’s very apparent in the research there’s a lot of math anxiety, both in homes and among teachers,” says Carolyn Pfister, an education administrator for the State Board of Education who has helped oversee the pilot. “We realized that for many young children, that their exposure to meaningful math in preschool and in the early grades was really limited. And we also knew that parents felt that they were more than happy to step up and help with reading but were a lot more reluctant to do so with math.”

The AIMS Center for Math and Science Education in Fresno led the training, which began in fall 2019. Over 1,100 educators at over 30 agencies across the state, including school districts, nonprofits and county offices of education have participated. Some of the largest school districts in the state have opted in, including Los Angeles, San Diego and Fresno Unified.

The grant also made possible a website and app to engage parents in teaching their children.

The training and access to resources for the initiative are free, and when materials are recommended for use in the classroom, they’re low cost, says Matilda Soria, the senior director of early care and education at the Fresno County Office of Education.

“A lot of teachers … they’re buying a lot of their materials, and in terms of some of the initiative’s projects, we think (about) sustainability,” Soria says. “With the web-based suites that we’re creating, these are things that will live beyond us so that educators and administrators will be able to access and glean from all of the lessons learned and content that we developed as an initiative.”

Does the program work?

WestEd, a nonprofit research agency focused on education, is serving as an independent evaluator for the initiative. A 2020 report that focused on two of the 30 agencies found that “Educators reported significant increases in their math content knowledge, confidence in supporting children’s early math, and frequency of math teaching practices.”

“We are not trying to push down a curriculum that typically started at first or second grade,” she says. “We are building on a natural capacity of children.”

A limitation of the case studies was that they relied on survey data, and self-reporting is sometimes unreliable. But according to the report, teachers gave a lot of anecdotal evidence that the children were picking up, or at least interested in the teachings, and that teachers were more aware of how math plays into everyday life.

For the next phase of the initiative, Zur is hoping evaluators can be in the classroom to observe teacher behaviors and attitudes.

“Down the road,” they hope to assess child outcomes, she said.

Listen to assistant teacher Melissa Blanco sing a math-language song in the infant classroom at the Lighthouse Center for Children.

Due to COVID-19, many early educators were forced to put their training to use online during the pandemic. As they took the surveys, AIMS was able to make changes in the training based on the feedback. Many teachers requested flexibility on what was taught, and different levels of teaching depending on a teacher’s confidence level.

Soria hopes to include more diversity in the content and in the types of families who are a part of the program, including Indigenous and differently abled children. She also hopes more evaluation of the initiative will better show how efforts are paying off.

Program leaders are also conducting focus groups for the update of the California Preschool Learning Foundations, a guide that informs early childhood learning for children across the state.

The Early Math Initiative aims to help not only educators, but parents, become more confident in engaging with children about math concepts.

At the Lighthouse, Montelongo is an example of both sides. She has an infant daughter at home whom she now talks to more about math.

“It can get annoying sometimes if you’re at the dinner table and you know there’s a math lesson in there,” she jokes. “I will be in the grocery store, and we’re seeing shapes all around. ‘Oh, we need to get some apples — how many apples should we get?”’ she asks her daughter.

It’s something she says she didn’t do with her older kids.

“I wasn’t knowledgeable in that area. Now that my eyes are open, I can see nothing but math.”

This story has been updated to correct the amount of funding approved this year by Gov. Newsom.