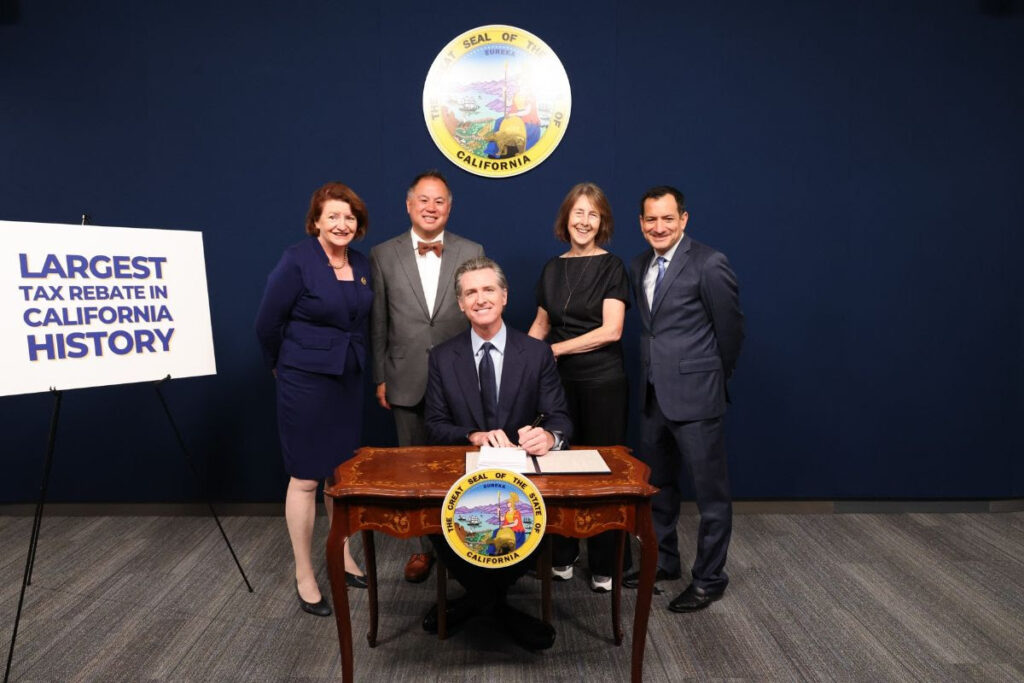 Big boost to funding formula, after-school for all and a promise for more Cal Grants 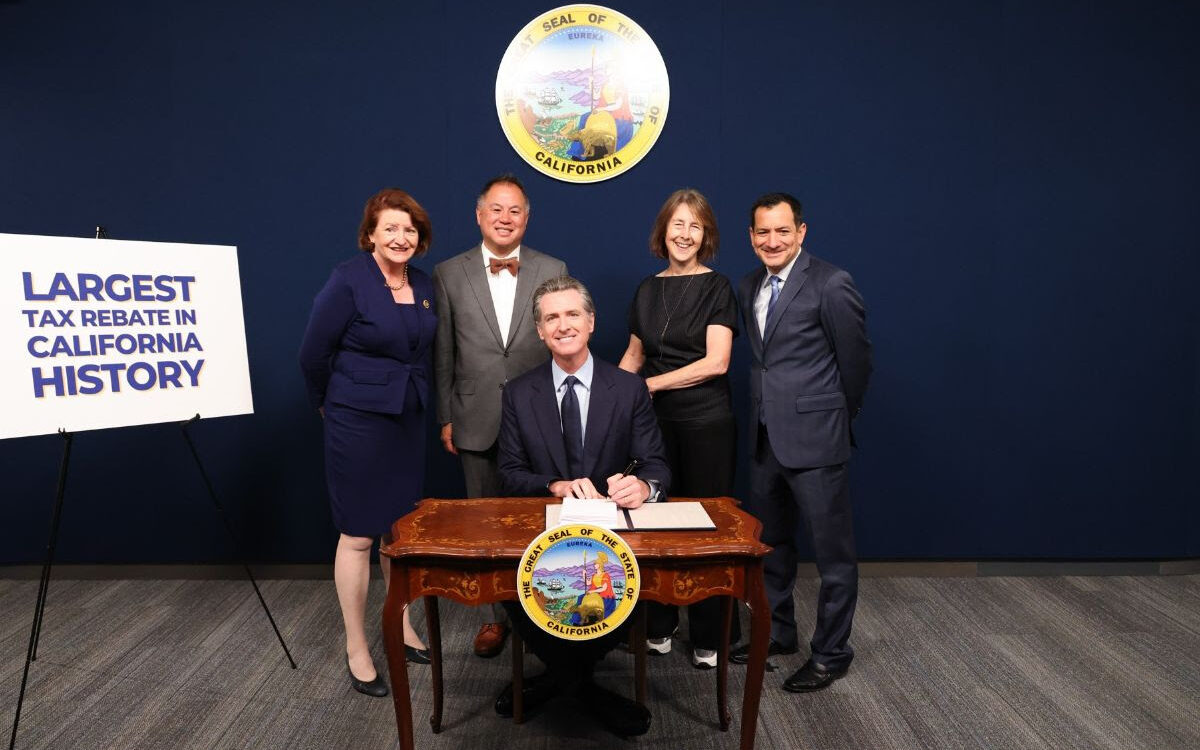 California school districts, enjoy it, make it last and spend it wisely, because you may never see an education budget like the one that Gov. Gavin Newsom signed Thursday.

Total state funding for schools and community colleges will be $128 billion.

That’s a dramatic increase from 2011-12 when, in the depths following the Great Recession, districts and community colleges got $47.3 billion in funding from Proposition 98, the formula that determines how much of the state’s general fund goes to TK-12 and community colleges. In 2022-23, the total increase in Prop. 98 funding alone will be $37.2 billion.

Inflation is running high, and staff shortages are big in many districts and charter schools. So a portion of that new money will cover rising costs, pay raises, new hires and a couple of billion dollars in districts’ share of higher pension costs for teachers and other employees.

The bulk of new money will go toward new programs and grants, most spread out over several years.

Elementary school families, particularly in low-income neighborhoods, should see a tangible, even life-changing benefit starting this fall. Their districts will be funded to offer three hours of before- and after-school activities and six weeks of summer school. At a minimum, they must offer the programs to all low-income students and English learners.

Transitional kindergarten will roll out for 4-year-olds who will celebrate their birthday between Dec. 2 and Feb. 2. That, in turn, will create some more state-funded preschool openings for 3-year-olds — a relief for at least some parents facing crushing child care costs.

“This is a continuation of our whole education agenda. Between this year’s and last year’s budget, which was also momentous, we have put a lot of components in place,” said Ben Chida, chief adviser to Newsom. “But I put myself in the shoes of the parents who are wondering, ‘Oh, great, record funding, but how do I see it in my schools?’ It is incumbent on us to deliver results. The big make or break is implementation and execution. That’s on all of us. It’s a shared responsibility.”

A progressive tax system, in which the highest 1% of earners pay 50% of the state income tax, produces boom and bust cycles. We’ve seen that for the last 40 years. Some economists are predicting that a recession could slam the door on the boom this year. But the budget assumes state revenues — and Prop. 98 — will at least be flat for another year. And if things go south, the Prop. 98 rainy day reserve will be filled to the brim — $9.5 billion — to be tapped when needed.

To simplify the complex, what follows is a graphic guide to key elements of the budget.

Most of the remaining funding is for grants, new programs and program expansions. Some are ambitious, including large appropriations for after-school programs, new career pathways in computing, health and education, literacy coaches in high-poverty schools and teacher training in math with a focus on pre-K to 3.

The largest, the $7.9 billion Learning Recovery Emergency Fund, gives districts five years to spend the money, and comes on top of billions of dollars in federal and previous state Covid relief funding. Much of that money remains unspent, with many parents unhappy there’s a lack of their No. 1 priority: tutoring.

The Learning Recovery Emergency Fund is among the new programs that are either restricted to or targeted to school districts serving low-income students.

Districts have complained that one-time funding inhibits districts from hiring teachers, counselors and aides because they could be forced to lay them off when the money runs out. But other districts, like Long Beach and Los Angeles Unified, have hired large numbers of staff, on the assumption that retirements and staff attrition and good planning would prevent a problem.

Edgar Zazueta, executive director of the Association of California School Administrators, said it’s OK to invest in new people with dollars that can be used for an extended time — if districts have the reserves and a plan to avoid a fiscal cliff if funding is cut: but be cautious. He credited that advice as the “Mike Fine rule,” referring to the CEO of the Fiscal Crisis Management and Assistance Team, or FCMAT, a state agency that assists districts to avoid financial insolvency.

A number of the other new TK-12 programs also have spending deadlines of at least three years.

Here’s a rundown of significant appropriations:

TK-12 portion distributed to all districts — approximately $2,000 per child — tied to the numbers of English learners, low-income, foster and homeless students in a district.

Permissible uses include tutoring, learning recovery programs, literacy intervention and programs for pre-K to 3, after-school programs, health, mental health and social-emotional support, and actions to reduce or stabilize staff-to-student ratios (a flexible use).

One of the few programs distributed based on a district’s total average daily attendance, about $600 per student.

Permissible uses: Don’t be fooled by the title, which stresses instructional materials; it can also be used for “operational purposes,” including “retirement and health care cost increases.” In other words, it’s very flexible.

$4 billion, including $1 billion rolled over from last year

Funding will allow schools to add three hours of after-school programming for a nine-hour day and six weeks of summer enrichment programs for students who enroll. It will apply to all K-6 schools, with higher payments of $2,750 per English learner, low-income, foster or homeless youths in districts where those students comprise more than 75% of enrollment. These districts must offer the program to all students.

Program will promote regional partnerships of school districts, higher education institutions, community groups and employers to advance students from high school to careers in health, computer science, education, STEM, and education, including early ed. Priority districts will be those with lower than average rates of A-G course completion and higher than average homelessness and foster youth, school suspension and expulsion and dropout rates.

Grants will train and pay for literacy coaches, with grants of at least $450,000, usable through June 2027, in high-poverty schools in grades K-3 — those where at least 97% of students are English learners, low-income, homeless and foster children; $25 million will go to selected county offices of education to develop and provide training for educators to become literacy coaches and reading and literacy specialists.

Instead of issuing new state construction bonds, the state will spend $1.3 billion of what’s left from the 2016 bond and $2.9 billion from the state’s general fund in 2023-24 and 2024-25. Money will be distributed under the existing formula in which the state splits the cost of new construction with districts and pays 60% of renovation and modernization.

Other budget items include: