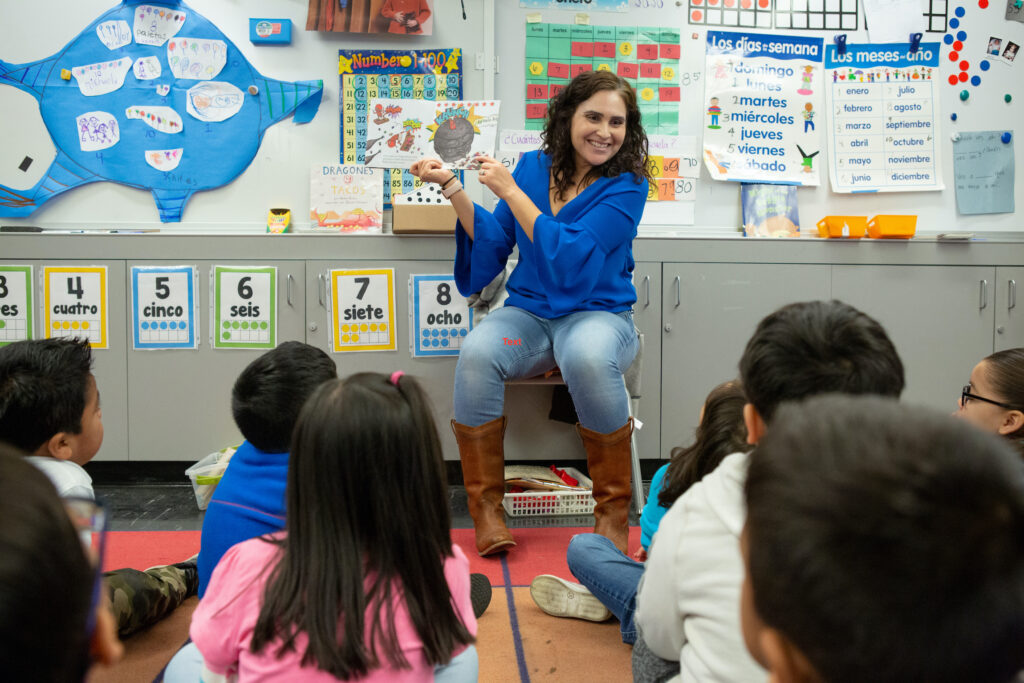 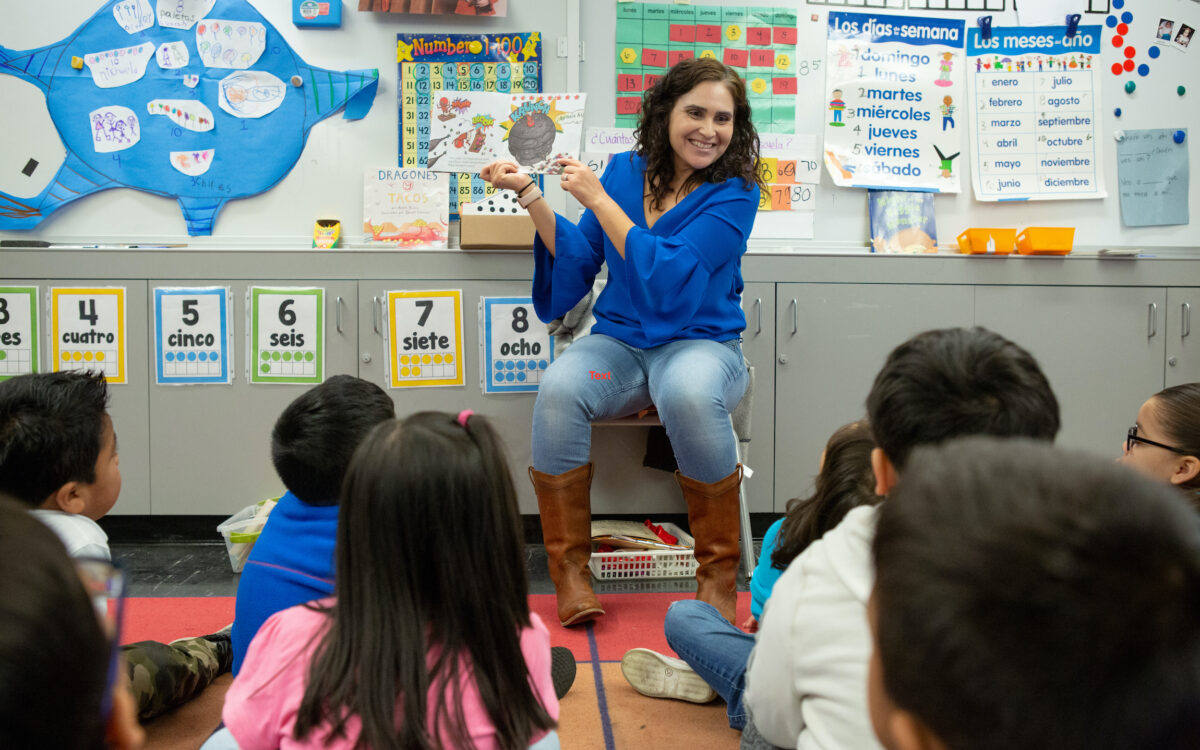 Photo by Allison Shelley for EDUimages
A teacher reads a story to her prekindergarten students at UCLA Community School.

Photo by Allison Shelley for EDUimages
A teacher reads a story to her prekindergarten students at UCLA Community School.

Next week, California will jumpstart a seven-year initiative to convert potentially thousands of schools into full-service, parent-focused community schools.

The California Department of Education is proposing that the following school districts, charter schools and county offices of education receive initial funding. The State Board of Education will take up the list on May 18:

In January, the state board adopted the framework for community schools.

Approved a year ago by the Legislature, the $3 billion California Community Schools Partnership Program will be the nation’s most ambitious effort to create schools serving multiple health and learning needs of children. Community schools have come to be known as schools with “wraparound services.” The underlying assumption is that a holistic approach to education, particularly in low-income areas with unmet basic needs, creates the best conditions for children to thrive emotionally and academically.  Gov. Gavin Newsom is proposing to increase the community schools program by $1.5 billion – 50% – in his revised 2022-23 state budget, which he released on May 13.

At its meeting next Wednesday, the State Board of Education is expected to approve $635 million in planning and implementation grants for 265 school districts, county offices of education and charter schools. (Update: After a 90-minute discussion, the board unanimously approved the first round of grants on May 18 as recommended.)

On the recommendation of the California Department of Education, 192 districts, county offices of education and charter schools will receive $200,000 two-year planning grants in the first round.

Districts and charter schools will be required to contribute an additional third as their match of the state grants.

Oakland Unified, a district with possibly the largest concentration of community schools in the nation, will be the biggest recipient, with $66 million to expand and supplement its community school network to 53 of the district’s 81 schools.

Curtiss Sarikey, chief of staff for the district, said he was excited by the news.

“We’d been doing this work for 10 years and have been poised for this moment,” he said. “The funding confirms that we have the systems in place to make the best use of these dollars, with the goal of improving results for kids.”

Los Angeles Unified will receive $44.4 million for 31 schools and San Francisco Unified will collect $33.7 million for 29 schools. Rocketship Public Schools, one of several charter school organizations to qualify for implementation grants, will get $15 million for 11 of its 13 schools.

Small, rural districts also will receive either planning or implementation grants. Among the latter are $712,500 for Wheatland Union High School, near Yuba City, and $5.5 million for Sanger Unified in Fresno County for four elementary schools.

Many districts, besieged this year with staff shortages, chronic student absences, Covid masking and testing challenges, appear to have taken an initial pass. More than two-thirds of the planning and implementation funding remains for future rounds. Depending on who applies, there may be more than 1,400 community schools, constituting about a third of the state’s schools with at least 80% low-income children.

The launch comes at a moment of clear need and abundant resources.

“The pandemic has highlighted the need to see schools as hubs for the community,” said Leslie Hu, a former social worker who is the community school coordinator at the Martin Luther King Jr.  Middle School in San Francisco. “We saw what happened to our young people and had to shift to better attend to their needs, to do things differently.”

Newsom made community schools a top TK-12 priority with last year’s unprecedented post-pandemic state budget surplus. But the funding, averaging several hundred thousand dollars per year per school, in itself will not massively expand services. There’ll be enough, depending on what each school chooses, to create a student wellness or parent center or add one or two staff, whether a family liaison, social worker, counselor or music teacher.

The top priority for schools, under the terms of the grant, must be to hire a school community coordinator. Like Hu in San Francisco, that person will be a key figure who must create and sustain partnerships with health-care providers, county agencies, nonprofit organizations and neighborhood groups – and to create cohesion among often disjointed programs and services.

In addition to community schools, Newsom and the Legislature have dedicated billions of dollars to new school programs that will unfold in the next several years: an expanded day and six-week summer school for all low-income elementary students; transitional kindergarten for 4-year-olds; free lunches and breakfasts for all students; expanded career pathways in high school; tens of millions of dollars for staff development, and hundreds of millions of dollars to hire K-3 literacy coaches if the Legislature adopts his proposal.

These programs will benefit more than community schools, but they mesh fundamentally with their mission.

Rocketship Schools already views its schools as community hubs, said California Director Maricela Guerrero. It would use the money to grow its Care Core Program, in which a dedicated staff member at each school coordinates resources and programs to overcome “learning barriers” – whether housing, food, counseling or mental health supports.

Sanger Unified, with13,000 students in rural Fresno County, would use its $5.5 million to hire counselors, a social worker to coordinate services and increase family involvement, and student-parent advocates across the four elementary schools eligible for the grant, said Associate Superintendent Tim Lopez. The district will combine funding from other sources for after-school activities that could include tutoring, clubs and leadership programs, he said.

Sarikey said the grants would enable Oakland’s community schools to dig deeper into two or three ongoing priorities, whether student attendance, mental health, academic acceleration or enrichment. “Because we already have around 50 community school managers in place, these dollars are really going to empower schools to make investments.”

Based on what the best community schools do, State Board of Education President Linda Darling-Hammond, an adviser to Newsom, and the architects of the California program concluded community schools must be more than traditional schools with a collection of supplemental services; schools themselves must change, and teachers and principals must rethink their roles and relationships.

Drafters of the state law creating the program established “four pillars” that must guide community schools: integrating services, including trauma-informed health services; expanding learning time; sharing decision-making among educators and administrators; and engaging families and the community. The state board added additional commitments – a willingness to share power, the use of “restorative practices rather than punitive, exclusionary discipline,” and an appreciation of a community’s culture, heritage, and strengths.

Trusting relationships, Hu said, are built by collaboration and listening to families, Hu said. As an example, she said, math teachers at her school and after-school staff who normally aren’t involved in curriculum, started meeting together. That led to an after-school acceleration class in which staff served as aides to teachers, and helped with an after-school online math skills program.

Listening to the voices of students is critical, said Laura Zavala, senior strategy director with Californians for Justice, a nonprofit that trains student activists. At the Felicitas & Gonzalo Mendez High School in Los Angeles, surveys and town halls for parents and students highlighted student health issues, including high asthma rates. That eventually led to the construction of a $6.5 million health center on campus.  “Having a school-based wellness center where students and their families can go to was a priority for the community,” Zavala said.

Milbrey McLaughlin, a professor emeritus of education and public policy at Stanford University, is a self-described fan of community schools who tracked their development over eight years in her 2020 book The Way We Do School: The Making of Oakland’s Full-Service Community School District. She said she was impressed by how schools addressed different needs “by involving families that never before had felt respected.”

“The family engagement in Oakland was impressive,” she said.

But she said she is worried whether administrators and teachers in districts receiving the funding will fundamentally change how they operate schools and open them to parents and the community. “Changing norms is hard and takes time,” she said. “I’m concerned that in 5 years, we will look at what we invested and not see results.”

Aware that districts will need guidance and help, the Newsom administration built in $166 million to fund a network of at least five regional technical assistance centers that will assist districts create community schools and oversee their progress. The Alameda County Office of Education will be the lead agency, if the State Board approves its $20 million grant.

The California Partnership for the Future of Learning, a coalition that includes Public Advocates, Advancement Project California, Californians for Justice, and PICO California wants tighter transparency and accountability requirements written into the community schools program.

In a letter to legislative leaders, the coalition calls for requiring community school grantees to annually report and publicly present to parents and the community on progress on achieving the goals, and an annual evaluation, backed by data, on whether the school’s practices are proving effective. The coalition also wants the state to prohibit using community school funding to staff police and safety officers.

“We don’t expect community schools to be strong immediately in all program’s cornerstone commitments and four pillars, but they should assess where they are and whether they are responsive to their communities,” said Erin Apte, senior legislative counsel for Public Advocates.

“Five years is a fabulous time to implement and try to get some different results. It’s also not that long in the big picture,” he said. “I would ask, ‘How do you think about sustainability from Day 1?’ What systems, processes and ownership are you going to build so this doesn’t become just another grant program, a flash in the pan. And then when the five years goes away, so does a large part of what you once started.”