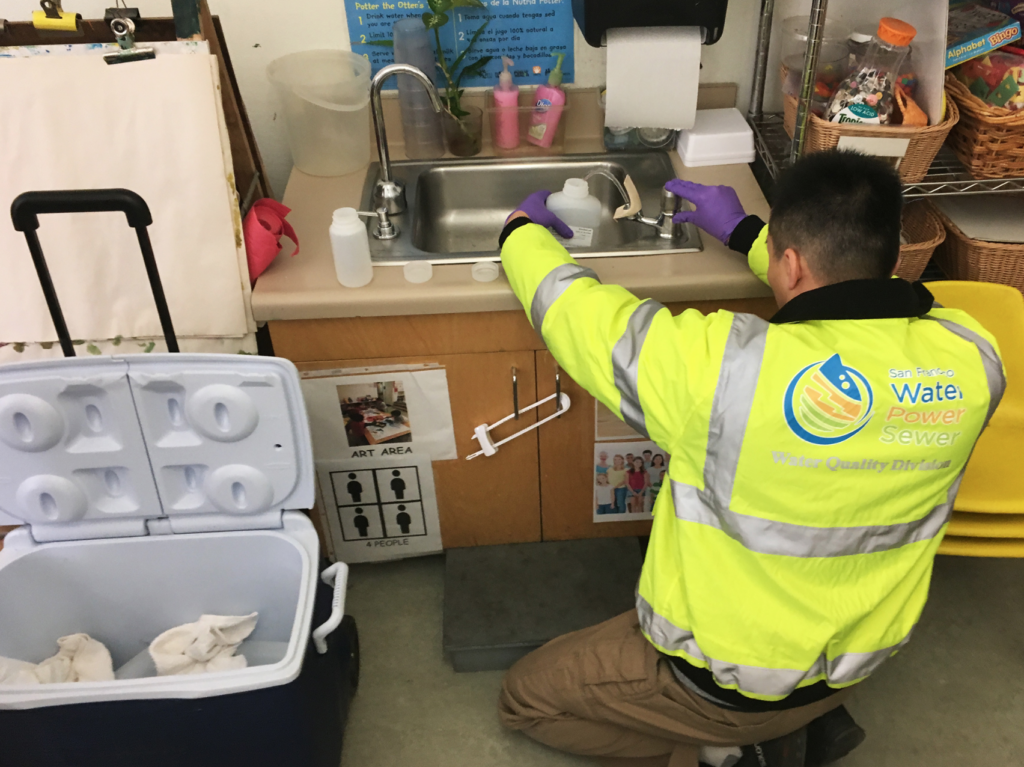 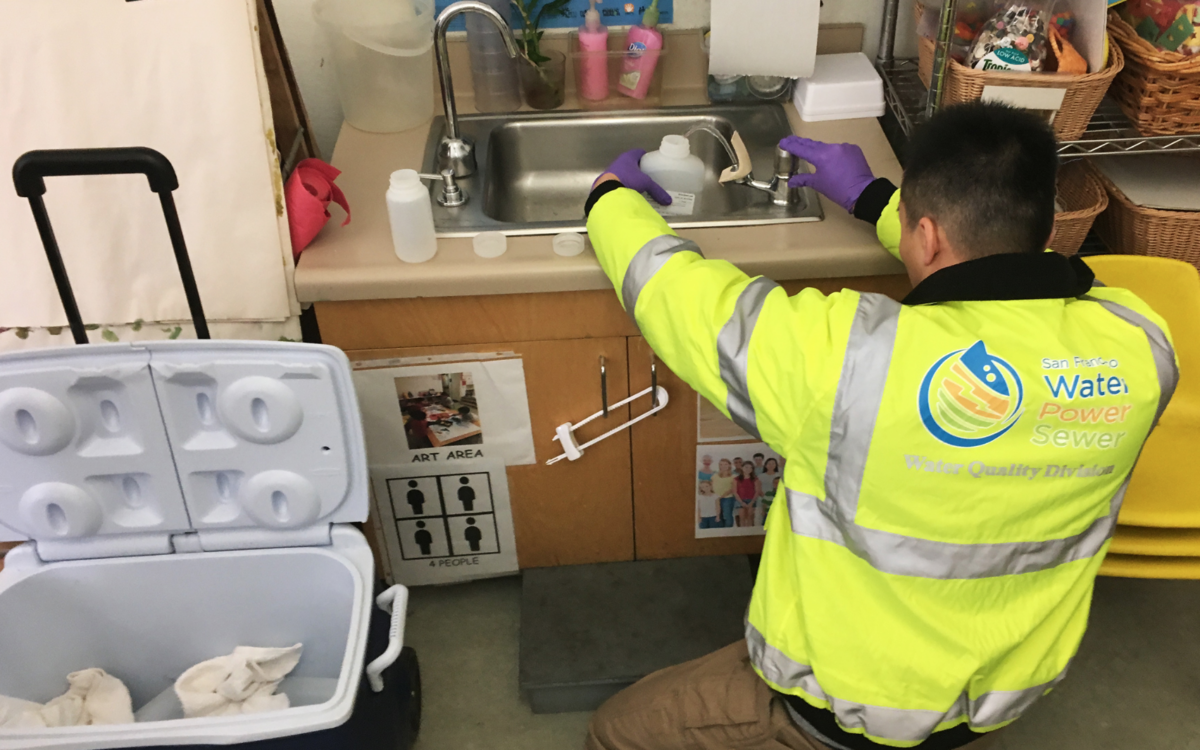 Credit Nico Savidge / EdSource
Water quality technician Weldon Ng sample water from a classroom sink in San Francisco in 2018. Prompted by a 2017 state law, schools across California had their water tested for lead to meet a July 2019 deadline.

Credit Nico Savidge / EdSource
Water quality technician Weldon Ng sample water from a classroom sink in San Francisco in 2018. Prompted by a 2017 state law, schools across California had their water tested for lead to meet a July 2019 deadline.

A 2017 state law led schools across California to have their faucets tested for lead in a program to reduce lead in school drinking water.

Public employee unions and organizations representing school districts, school boards and school business officers are pitted against each other on legislation spelling out how to protect students and school adults from lead in water.

Newsom must pick a side: Senate Bill 1144 easily passed through the Legislature.

Authored by Sen. Scott Wiener, D-San Francisco, on behalf of the California State Pipe Trades Council, the bill would require school districts to write a water efficiency and quality report determining lead levels in every building and replace or install filters on every fixture with high levels of lead. Districts could have to replace lead pipes in buildings — if the state dedicates funding to do so.

Lead is a highly toxic metal that can harm the health and cognitive development of children when ingested or inhaled, even at extremely low levels. An EdSource series four years ago revealed the significant risk for lead exposure in many schools that tested for it.

By default, the bill would adopt the current, outdated standard for unsafe concentration of lead in water. Set more than a decade ago by the U.S. Environmental Protection Agency, it is 15 parts per billion. The federal Centers for Disease Control and Prevention and many advocates for children’s health say anything over 5 parts per billion is hazardous for children’s health. President Joe Biden’s EPA administrator has said he favors lowering the threshold, and it could happen by 2024.

The level of lead contamination to require action was not brought up in the negotiations on SB 1144, and children’s health groups were not involved, according to those familiar with the discussions. The author and sponsor of the bill did agree to push back the deadline for compliance, phasing it in over four years, starting in 2027.

But that and other changes narrowing the bill’s scope didn’t placate the opposition, whose Aug. 16 letter said the bill would create an expensive unfunded mandate potentially costing hundreds of millions of dollars and a costly, complicated new program that “failed to identify a persistent problem in schools” it would solve.

The letter doesn’t say so, but several coalition members said the pipe fitters union had a self-interest in backing the bill. Troy Flint, vice president of communications for the school boards association, said the focus of the bill is to create “revenue and employment opportunities for trade unions that will do the work.”

To an extent, the bill would pick up where a 2017 state law, Assembly Bill 746, left off. That legislation required local water companies to test lead levels in every school. In cases where levels exceeded 15 parts per billion, districts had to close off fixtures, take mitigation efforts like regular flushing of faucets or replace them. The deadline was July 2019.

But, unlike a few states that require periodic testing, that was only a one-time requirement, and some districts were exempted. In large schools, where only spot-testing was required, some lead-laden outlets may have been missed. In violation of the law, some districts failed to notify parents their schools had unsafe lead levels.

An EdSource analysis of test results for 3,700 schools that had tested for lead as of the summer of 2018 found that 4% — 150 schools ­— recorded a lead level over 15 parts per billion. But at least one outlet in 897 schools tested between 5 and 15 ppb, requiring no action. That’s significant because scientists and physicians have criticized the federal 15 ppb standard as too high.

The maximum allowable concentration of lead in commercially sold bottled water is 5 ppb. The American Academy of Physicians, saying that any amount of lead is dangerous for children, says the limit should be no more than 1 ppb. The 5 ppb standard was brought up in negotiations over AB 746, but the Brown administration raised concerns about higher costs.

State and districts can choose a lower standard

States have the ability to lower the safe level standard, and districts can act on their own. Oakland, Long Beach and Los Angeles are among districts that have adopted the 5 ppb as the target for fixing and replacing outlets in their schools. Berkeley Unified adopted a 1 ppb limit in schools.

“We know there is no safe lead level. Schools ought to work to remove that source of lead for these kids,” Dr. Jennifer Lowry, chair of the American Academy of Pediatrics’ Council on Environmental Health, told EdSource in 2018.

Children Now, which advocates for children on issues of health and education, didn’t take a position on SB 1144 but does support “regulation and guidelines backed by the scientific community and pediatricians, who know that no amount of lead exposure is safe for growing kids,” said Vince Stewart, the organization’s vice president for policy and programs.

Whether the gauge is 5 parts or 15 ppb, there is no reliable estimate of how much work is needed to reach safe levels in districts and charter schools.

The state Legislature appropriated about $17 million to help qualifying districts with testing and fixture replacement in 2018 and 2019. But that was clearly not enough. In placing a $13 billion school construction bond on the March 2020 ballot, legislative leaders and Newsom designated $150 million to test and fix water fountains and fixtures with high lead levels, to be distributed to the lowest-income districts.

Districts requiring more extensive removal efforts, such as replacing a contaminated water line, could seek supplemental funding of up to 10% of the value of a school renovation project, with the state paying 60% of the cost. Ian Padilla, who represents the Coalition for Adequate School Housing, which lobbies for facilities funding, said the group had sought $500 million for lead abatement in the bond.

But in March 2020, voters defeated the bond, which unfortunately for advocates had the bad luck of being designated Proposition 13 on the ballot. Padilla said with Covid, primarily an airborne contagion, soon consuming attention, the priority for facilities spending shifted from lead in water to HVAC systems and air filters.

Newsom proposed committing $1.8 billion in deferred school building maintenance in the 2022-23 budget, but it was cut in final negotiations.

The current bill includes no funding for testing and the work it could require, although about $15 billion of Biden’s $350 billion infrastructure funding, passed in December, is dedicated to lead pipe removal in homes and schools.

In a letter supporting SB 1144, Tiffany Mok, legislative representative for the California Federation of Teachers, said schools in California are “especially afflicted” by poor water quality. It “is amounting to a public health crisis, and we cannot sit back while our children consume unsafe water,” she wrote.

School organizations, however, said they object to the pipe fitter union’s approach to fixing the lead problem. The union didn’t consult with them in drafting the bill and ignored a model that had worked. Under the previous law, the burden of testing was put on water agencies. That took advantage of those agencies’ expertise in identifying potential problems and provided oversight separate from schools.

“Overall, I saw the bill as a huge success, but more work is necessary,” said Eric Bakke, a former legislative advocate for the California School Boards Association, who was involved in both the drafting of the previous law and the defeated Proposition 13.

Under the current bill, if lead is found at higher levels at the faucet than coming into a school, districts could be required to search for and remove lead pipes. This could require costly construction work overseen by undefined qualified personnel.

The bill says that invasive techniques would not be required. But in a letter urging Newsom to veto the bill, Los Angeles Unified Superintendent Alberto Carvalho wrote his district is unaware of how this can be done without tearing down walls and sampling the pipe, potentially releasing asbestos and harmful chemicals.

The author of the 2017 law requiring water providers to test water in schools was Assemblywoman Lorena Gonzales, D-San Diego. In January, she resigned from the Assembly to become the top executive at the California Labor Federation, the organization representing organized labor.

“I was not involved with this bill,” she wrote in an email this week. “I support all bills that have the support of our affiliated unions within their jurisdiction.”

The lobbyist for the California State Pipe Trades Council did not respond to requests for comment.

The bill would also apply to all state buildings. It includes long sections requiring testing and mitigation for the water-borne bacteria causing Legionnaire’s disease, of which there have been no known outbreaks reported in schools. The scaled-back final version would apply only to buildings of at least 10 stories with water towers — all but excluding schools but not some state buildings.

Newsom has until the end of September to decide to sign, veto or let SB 1144 become law without his signature.