Dashing hopes for a rebound, K-12 enrollment has fallen sharply again this year, by an additional 110,300 students, pushing total public school enrollment in California below 6 million for the first time since 1999-2000.

The decline includes charter school enrollment, which dropped for the first time year-to-year in two decades, by 12,600 – 1.8%, the same percentage as school districts. “Charter schools are public schools and are facing the same statewide demographic challenges as noncharter public schools,” said Myrna Castrejón, CEO and president of the California Charter Schools Association.

For months, districts have known their own enrollment figures, which can vary significantly across regions and counties. The information is used to plan budgets for the next year and make long-term plans for staffing and close or open schools. New Los Angeles Superintendent Alberto Carvalho said he would analyze enrollment trends to develop a strategic plan to attract families back to LAUSD schools as part of his first 100 days plan. Other districts will likely do so, too.

For Gov. Gavin Newsom and legislators, the new numbers will add urgency to decisions on how to fund schools post-Covid. Schools are funded largely by students’ average daily attendance, but drops in enrollment will affect their bottom lines and ability to meet expenses.

As they did last year, student enrollments hemorrhaged in Los Angeles County, down 3.6% this year on top of 3.2% in 2020, and the Bay Area, down 3.3% on top of the 3.1% in 2020. Three of the state’s four largest school districts alone — Los Angeles Unified, San Diego Unified and Long Beach Unified — accounted for nearly a quarter of the loss in student enrollment this year. Enrollment in Fresno Unified, now the third-largest district, barely budged over the past two years. 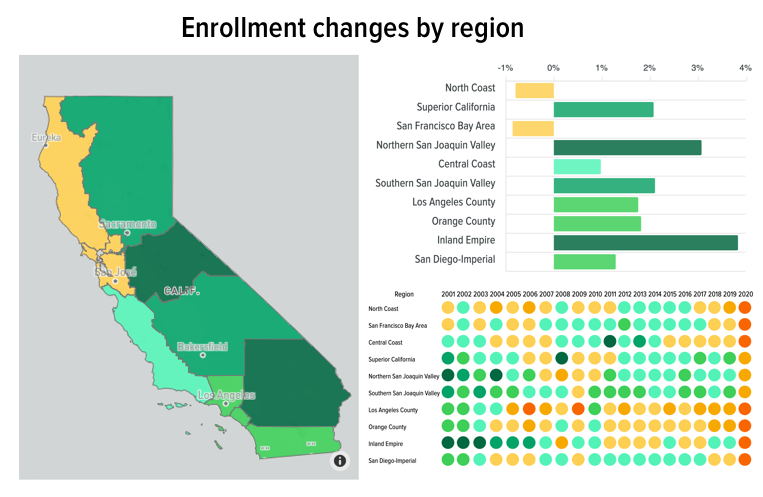 This interactive infographic, updated with 2021-22 data, lets you dive deeper into enrollment changes by region.

But the decline was uneven throughout the state, with a slight increase, though less than 1% in enrollment this year, in what’s called Superior California, which is eastern California from Sacramento to the Oregon border; the Inland Empire of San Bernardino and Riverside counties; and the San Joaquin Valley area.

Some of the enrollment increase continued a decadelong migration inland from Silicon Valley, Orange County, San Diego and Los Angeles to where homes are bigger and rents are cheaper. But Covid, with the ability to work remotely, may have quickened the pace.

The drop in enrollment also was not equally spread among ethnic and racial groups. Latinos, who comprise 55% of K-12 students, declined only 0.9% this year, and Asian student enrollment declined 1.9%, while Black enrollment dropped 3.6% on top of 4.5% last year. White enrollment fell 4.9% on top of 5.6% last year; the two-year loss of 141,000 students is more than half of the total decline in students statewide.

What happened to the students?

School boards and superintendents were crossing fingers that enrollment would recover quickly this year, as with the economy. That didn’t happen, but top-line enrollment data alone doesn’t yet answer big questions: Where did the students go – to another district or out of state? Did they go to private schools, or did families try homeschooling? Might they still return to public schools? Did tens of thousands of families disengage and lose touch with the school over the past two years?

Factoring in a declining birth rate and a decline in in-state migration, demographers for the California Department of Finance before the pandemic were projecting 703,000 fewer students – 11% statewide – by 2029-30. Did Covid accelerate or compound that number? It’s hard to tell.

“I thought there might have been a bounce-back, but instead there wasn’t,” said Julien Lafortune, research fellow with the Public Policy Institute of California, who has analyzed enrollment data.

Enrollments declined from 2020 in all grades but two and fell significantly in half of the grades. But enrollment did increase in kindergarten, by 7,756 students, and in 12th grade, by 3,577. Edgar Zazueta, the new executive director of the Association of California School Administrators, took solace in that. 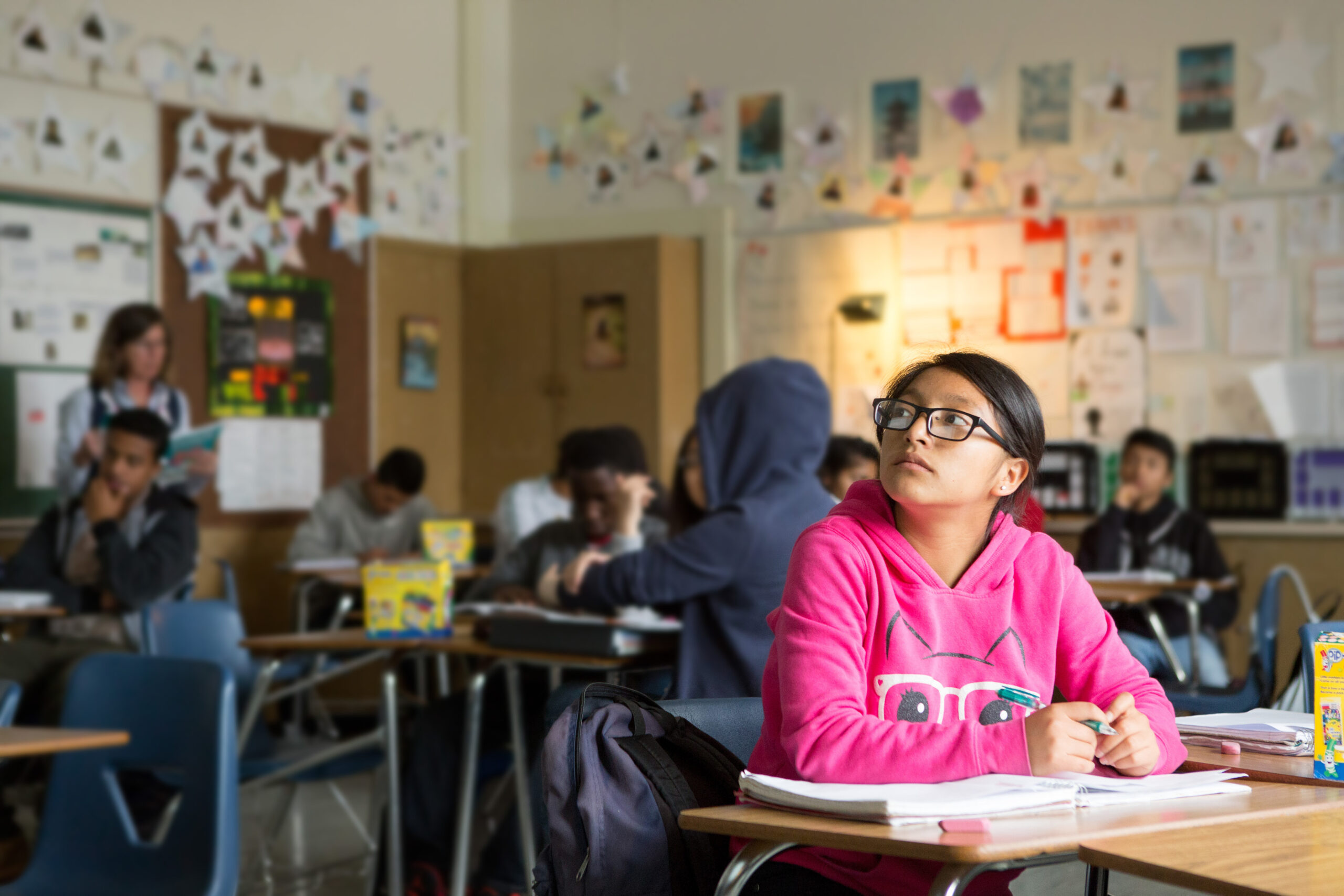 “The latest statewide enrollment data captures a complicated picture for our schools,” he wrote in an email. “On one hand, we should be worried about the decline in overall enrollment trends that we are continuing to witness. We should not only be concerned about the fiscal consequences of having less students, we need to question where the students are going and how their educational needs are being met.”

“On the other hand,” he said, “there appears to be some glimmers of hope in the numbers. An increase in kindergarten population could mean that the expansion of TK could be bringing in more students into the system. The increase in 12th grade students could be a sign that the system is doing a better job of keeping more students on track towards graduation.”

The 495,327 seniors in the Class of 2022 who showed up on Census Day last fall were about 1,400 students more than when the class arrived in ninth grade. This could indicate that some students who failed to graduate in 2021 re-enrolled this year to earn their missing credits. That’s what happened in Los Angeles Unified, said Veronica Arreguín, the district’s chief strategy officer.

Last year, more than a third of the total decline was in kindergarten. School districts were hoping that, with the return to in-person instruction everywhere last fall, parents who didn’t enroll their kids during distance learning would enroll in kindergarten or first grade. Kindergarten did grow, but the increase didn’t make up for the 61,000-student drop in fall 2020. And first grade enrollment plummeted this year by an additional 18,292 students.

Some experts suggest that last year’s missing kindergartners didn’t actually forgo kindergarten, parents just waited to send them until it was less scary, closer to what the kindergarten experience is supposed to be.

“Maybe some kids didn’t skip kindergarten, maybe they just delayed it, and/or more than usual did it twice,” said Shantel Meek, founding director of the Children’s Equity Project at Arizona State University. “That’s what I would have done. Done it twice or hold them back.”

Scott Moore, head of Kidango, a nonprofit organization that runs many Bay Area child care centers agreed that’s what may have happened.

“I would guess that for children who missed kindergarten in 20-21 due to the pandemic, their parents decided to enroll them in K in 21-22 and not 1st grade despite being age eligible,” he wrote. “They are basically red shirting their child.”

Deborah Stipek, a professor in the Stanford Graduate School of Education and an early education expert, said multiple factors could be at work.

“Probably both homeschooling and private school likely played a role,” she said, “but there is also a decline in births in California and an increase in people leaving the state,” she said.