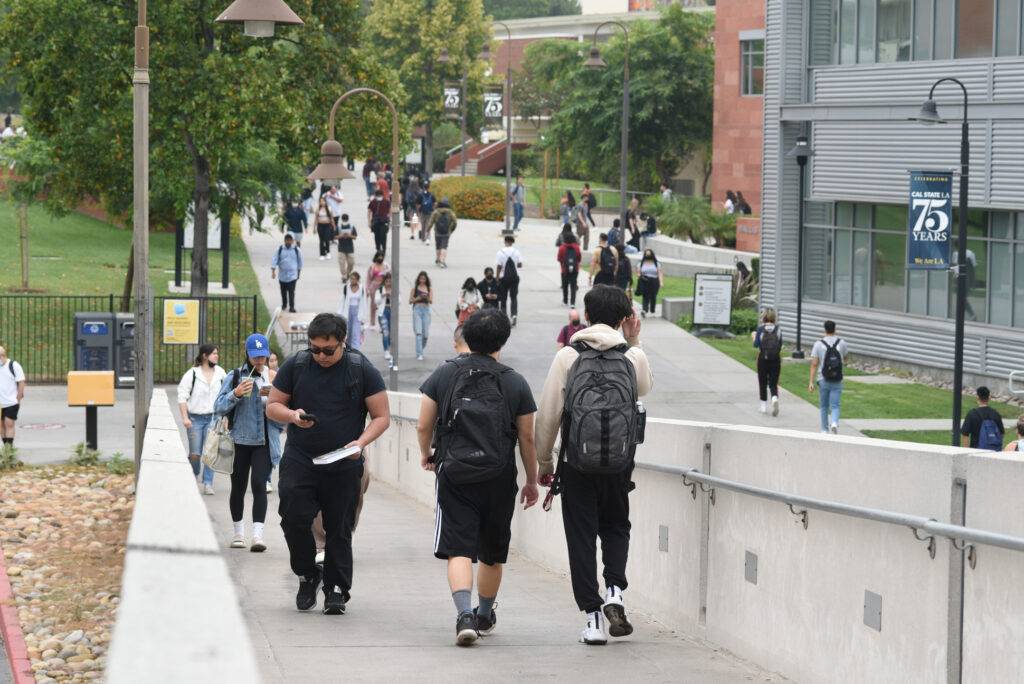 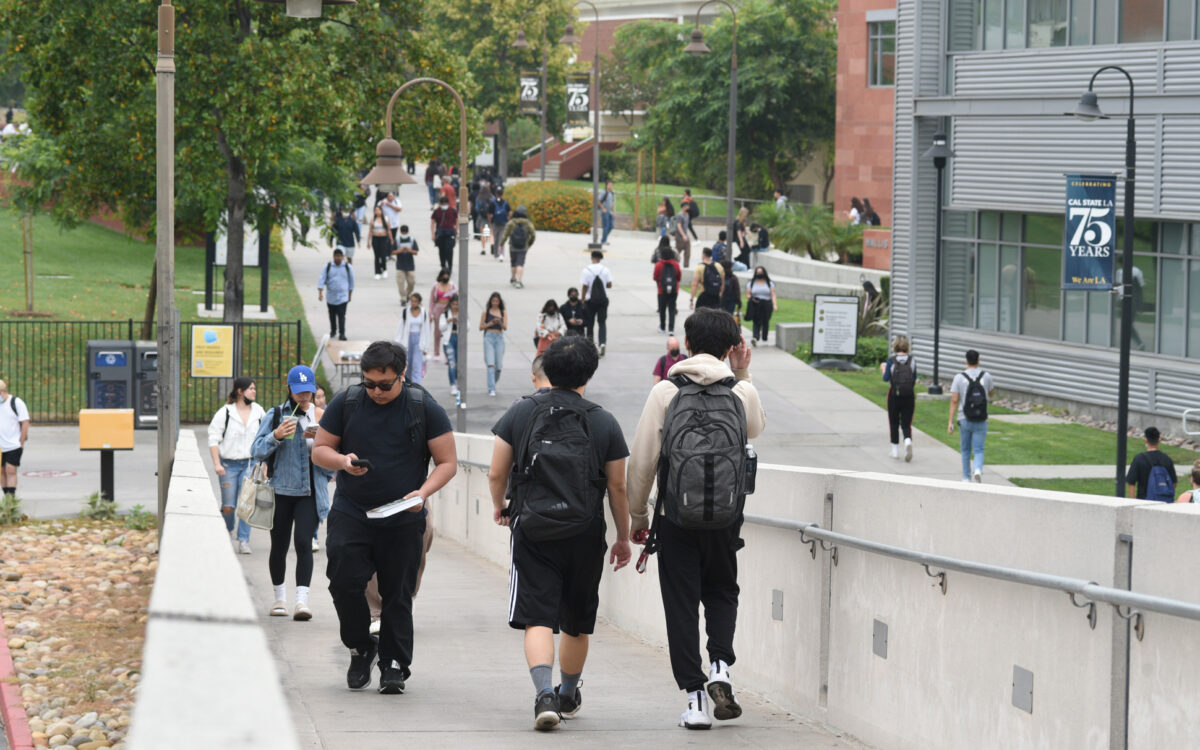 Students at California’s public colleges and universities will begin returning to campuses this month, and many of them will be welcomed back to full in-person classrooms, no mask mandates and few Covid-19 testing requirements. At some community colleges, students won’t even be required to be vaccinated.

More than two years into the pandemic, Covid-19 restrictions have been significantly eased across the University of California, California State University and the state’s 116-community college system, which together enroll some 2.5 million students. That’s the case even as the colleges prepare to deal with another virus, monkeypox, potentially spreading on their campuses.

It’s a stark contrast to last fall when indoor mask mandates were the norm at colleges across the state and many campuses also routinely tested all students for the virus. Amid the threat of the delta variant at that time, campuses were also preparing to move classes online if necessary. At least one CSU campus, Stanislaus State, delayed in-person classes for about five weeks at the start of the fall 2021 term.

The specific protocols in place this year vary across the campuses, especially at the 72 brick-and-mortar community college districts governed by locally elected boards. Some of those districts never had vaccine mandates, and some have rescinded vaccine mandates ahead of the fall term, which is underway at some colleges and begins later this month at others.

Systemwide vaccine mandates are still in effect at UC and CSU, but many campuses in those systems no longer require students and staff to mask indoors and have stopped requiring students to be regularly tested for the virus. Fall classes have started at most CSU campuses and begin this week at two UC campuses, Merced and Berkeley. UC’s other seven undergraduate campuses are on the quarter calendar and resume classes in mid-September.

Gone also are the days of online classes aimed at preventing the spread of the virus. UC and CSU are at full capacity in their dorms, are holding almost all classes face to face and have no plans to shift to online classes. A bigger share of community college courses are being offered remotely, but that’s largely due to student demand for online instruction and not due to Covid. Many community college students, who are typically older and often work or have family obligations, have told the colleges they prefer remote learning.

Even campuses that want strict Covid restrictions are finding it difficult to keep them in place because, in many cases, it would run counter to public health guidance to do so.

The Contra Costa Costa Community College District, home to three colleges, had an indoor mask mandate as recently as this summer but decided to lift that requirement ahead of the fall term to align with Contra Costa County’s public health department. Tim Leong, a spokesman for the district, said district officials were torn over that decision.

“There are students and employees that still feel very concerned about their health, but we also are realistic to know that it’s hard to have an answer that’s going to win with every person,” Leong said. “I think to be the only entity that’s requiring masks, that’s difficult when everybody is running to places like the grocery store or the mall and there’s no mask mandate.”

The same is true at many CSU campuses, including Maritime, Chico State and San Luis Obispo, as well as at UC campuses such as Davis and UCLA, which lifted its mandate on Aug. 15.

But just because masks aren’t required doesn’t mean they won’t be worn. Most campuses that aren’t mandating masks are still strongly recommending them. At UC Riverside, students living on campus are required to wear masks while moving into campus housing, but not after that. Riverside also didn’t have a mask mandate in the spring, but most students have still chosen to wear masks around the campus, said Sheila Hedayati, executive director of the Environmental Health and Safety department at the campus.

“Our students are fantastic and very conscientious. I see more masks than I see full faces,” Hedayati said.

In the CSU system, Long Beach is among the campuses that will require masks indoors to start the new academic year because of an “ongoing wave of Covid-19 infections from the current dominant variant,” President Jane Close Conoley said in a message to the campus community earlier this month.

Whether students need to be tested for the virus also depends on where they attend.

At some campuses, like College of the Canyons in northern Los Angeles County and Cal Poly San Luis Obispo, testing isn’t required. Other campuses, including those in the Los Rios and State Center community college districts, require routine testing only for students who aren’t vaccinated.

A few campuses, including UC Davis and UC Irvine, require students living in campus housing to be tested upon moving in, but routine testing isn’t mandated after that, except for unvaccinated students at Irvine.

UC Riverside has one of the stricter testing policies in the state. In addition to requiring weekly testing of unvaccinated students, the campus will also mandate testing every two weeks for students living on campus.

The easing of Covid-19 restrictions at some colleges also applies to vaccine rules. The state’s largest community college district, the Los Angeles district that’s home to nine colleges, rescinded its vaccine mandate over the summer, said William Boyer, a spokesman for the district. The Coast Community College District, based in Orange County, also rescinded its vaccine mandate this summer.

Some community colleges, though, continue to require vaccines for students taking classes in person, including the Contra Costa, Los Rios and State Center districts.

The systemwide vaccine mandates at CSU and UC also remain in effect and soon may require an additional shot for students. Currently, both systems require students to have their booster shots and a second booster could soon be available to college-aged students.

UC Davis officials are anticipating that a second booster will be available to students as soon as next month, said Cindy Schorzman, medical director of Student Health and Counseling Services. If that happens, students across UC would need to get the booster. Schorzman added that there will likely be a grace period for students, but it probably won’t be a long one.

Back to in-person classes, more online at community colleges

Across UC and CSU, face-to-face instruction is the norm entering the new academic year. At Chico State, 80% of classes will be in person. At San Luis Obispo, about 98% of courses will be in-person, a 13% increase from last year. UC Irvine is holding all classes in person except for a few that are being held online for academic purposes and not for reasons related to the virus.

Classes were also mostly held in person last fall, but with the delta variant spreading rapidly at that time, campus officials across UC and CSU were preparing to quickly pivot to online classes.

This fall, moving courses online across the systems is highly unlikely, officials said.

“I don’t think any of us really want to see a point where we go back to a stay-at-home situation, with online classes,” said David Souleles, director of UC Irvine’s Covid-19 response team. “Across the country, if you look at state and local governments, that’s not on the table for the most part.”

Sean Murphy, a spokesperson for Chico State, said the campus successfully held classes last year during the delta and omicron surges. Officials there are confident they can do the same this fall, though he added that “we have the mechanisms in place to change the mode of instruction.”

The situation is much different at most community colleges, which are still offering more courses online than before the pandemic. In the Los Rios district, 50% of classes are still being offered online, compared with 15% pre-pandemic. About half of courses are also online at College of the Canyons and the Los Angeles district.

For the most part, those colleges are offering many online courses not for public health reasons, but because students have indicated they prefer remote classes. Community colleges across the state have suffered dramatic enrollment declines since the onset of the pandemic, with the system as a whole losing hundreds of thousands of students. Colleges are doing what they can to bring students back, and that often means offering online classes, which often receive more enrollments than in-person classes.

At College of the Canyons, about three-quarters of students attend part-time and are often “doing other things, like working or caring for family or both,” said Eric Harnish, a spokesman for the college.

“So, having the flexibility to attend online is something they really appreciate,” he added. “And by having significant numbers of classes online, we’re giving them the opportunity to actually attend.”

To varying degrees, many California colleges are ready to confront positive cases of the monkeypox virus on their campuses, which has already happened at a few universities across the country.

Officials with campuses across the three systems said they are consulting with their local health officials on plans and possible responses. Supply of the monkeypox vaccine is low across the country, but officials said they have requested vaccines as soon as they’re available.

At UC Davis, if a student believes they have monkeypox symptoms, that student will get a telehealth appointment and, if needed, will be tested for the virus. If that student needs treatment, the campus plans to work with the Yolo County’s public health department to secure that treatment, or the student can get treated through UC Davis Health.

While the experience of dealing with Covid-19 could help colleges respond to monkeypox, the virus will also present new challenges, said Souleles, the UC Irvine official. One of the main differences is that if a student contracts monkeypox, the isolation period could be much longer than is required for Covid. Instead of the five or seven days of isolation that Covid requires, a positive case of monkeypox could necessitate that a student isolates four to six weeks.

“We’re trying to think through what that means and how that might be managed, like where that isolation takes place, whether it’s on campus or at home or case-by-case dependent. So we’re making sure we have a plan and that we’re communicating that in advance of our return to fall, so that families and students know what to expect,” Souleles said.