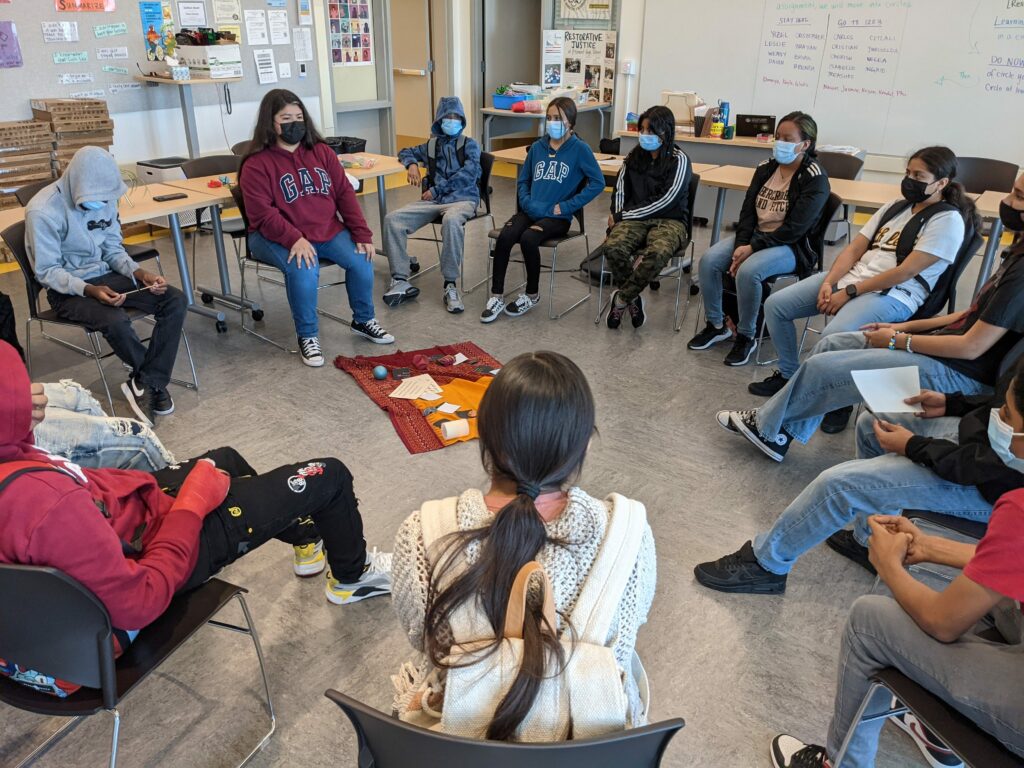 Five years ago, Fremont High in East Oakland had some of the highest discipline rates and lowest attendance in the city. Fights and conflicts were common occurrences. Only 1 in 4 graduates were qualified to attend public college in California. One in 3 dropped out entirely.

But Fremont High is – literally – a different place now. With a newly rebuilt campus and an intensive focus on improving campus climate, Fremont has seen its enrollment jump 20% even as districtwide enrollment has dropped, and the number of students who qualify for college admission has nearly tripled.

Hear a conversation with one of the students involved in Fremont High’s Restorative Justice program.

Much of the credit, students and administrators say, goes to a restorative justice program that’s evolved beyond its original mission of resolving disputes to encompass a total transformation of school culture.

“If you grew up around here, you remember when Fremont had a horrible reputation,” said Tatiana Chaterji, the school’s restorative justice facilitator. “But we’ve worked so hard on building community, relationships, trust. I really feel we’ve made a difference. I feel so proud. Honestly, to see where we are now, it’s a dream come true.” 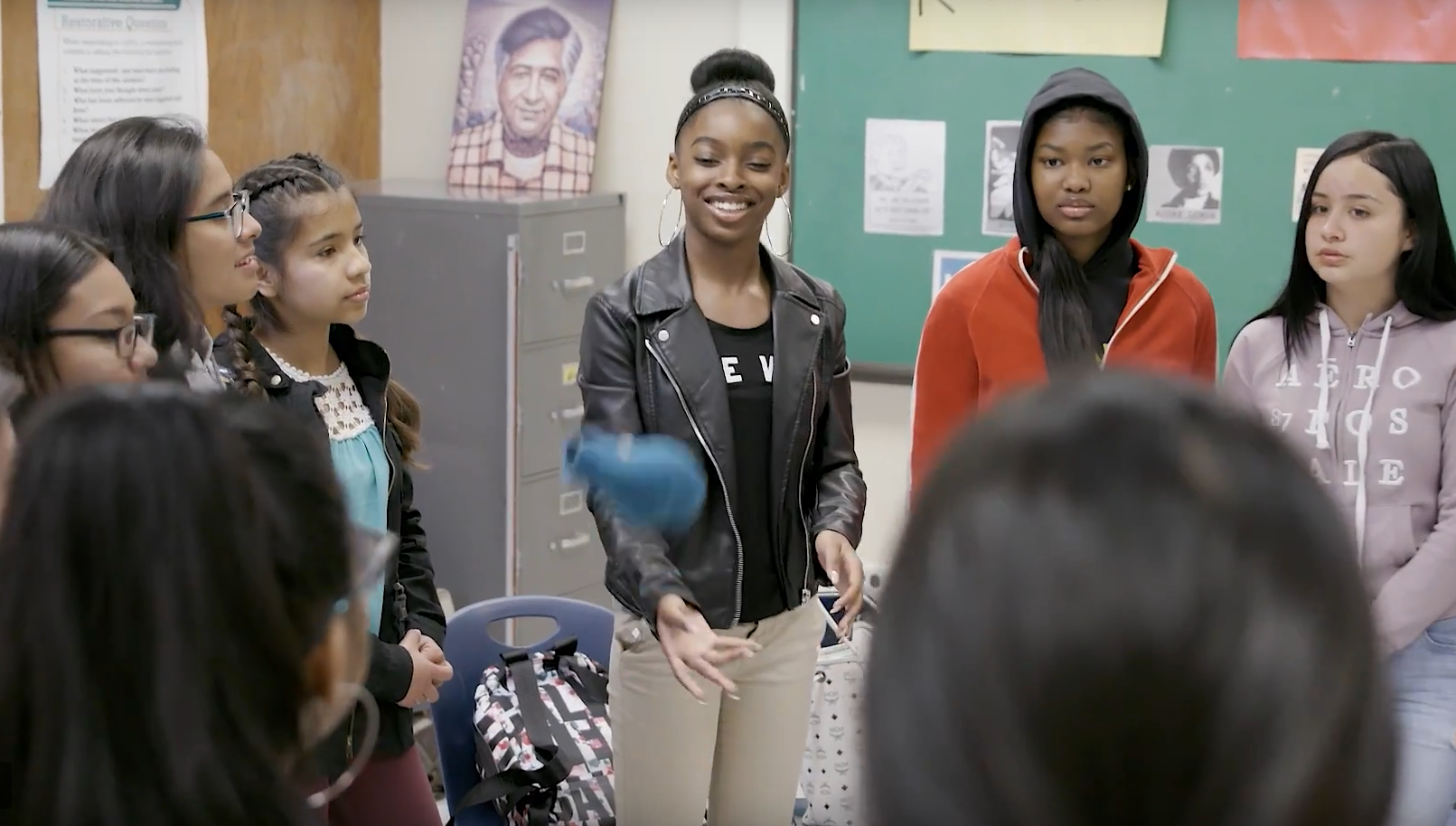 Restorative justice, an alternative to traditional discipline, focuses on repairing the harm done when students misbehave. Typically, students sit in circles and talk about their emotions or how an incident affected them. By getting to know each other in a more personal way, the hope is that students learn to respect each other, build friendships and take responsibility for their actions.

Oakland Unified has been funding restorative justice at various schools for almost two decades, but in 2017 made a $2.5 million investment to expand it across the district. That’s when Fremont High launched its comprehensive program. In addition to organizing circles, Chaterji works with teachers to bring restorative practices to every classroom.

Over the years, the program has broadened to include community groups, district staff and even alumni who return to help out. The program has its own website and Instagram account. Fremont students attend national restorative justice conferences. It’s been featured in a book by Heather Manchester, “The Little Book of Youth Engagement in Restorative Justice” (2021). Even the school security guards participate.

But most notably, it no longer just focuses on conflict. Students use circles to welcome newcomers, get to know each other and build bridges between different cliques and ethnic groups. Situated on the edge of the vibrant Fruitvale neighborhood, Fremont High is rich in diversity, with immigrants from Mexico and Guatemala, Yemen, Tonga, Cambodia and Vietnam, among other countries. More than half are English learners, and almost all are low-income.

To include as many students as possible, restorative justice circles are held in English, Arabic and Mam, an indigenous language in Guatemala. They’re incorporated into a leadership class and a class for ninth graders where students learn to design and lead their own circles. They’re also tied to career planning, with a focus on law, psychology, social work, law enforcement and teaching. Somewhere on campus, students hold circles almost every day.

For freshman Jayla Pablo Martin, circles in Mam are an important way to help newcomer students feel welcome. When she arrived in the U.S. at age 10, she spoke little English and felt very shy at school. She didn’t understand what was happening in class and had few friends. It was a lonely time, she said.

This year, she helps lead circles for Mam-speaking students at Fremont, in an effort to help them feel comfortable, safe and welcome at school.

“I tell them I know how it feels because I also went through it,” she said. “I tell them to never give up and keep trying. I feel that because I speak Mam, I can help. It feels good.”

At a recent circle in Mam, students shared a little about themselves, then played a musical chairs-type of game where someone would say, “I love my neighbor who … wears red shoes,” and all the students wearing red shoes would scramble for new chairs. Students were laughing and joking and having fun.

Fremont has a sizable Yemeni population, as well, refugees from a civil war. Ebrar Wasel, a junior, said that circles in Arabic, as well as English, made a huge difference in helping her adjust to a new school, a new city and a new culture, especially after experiencing the trauma of war. As a recent immigrant, she was often afraid to participate in class and often felt uncomfortable at school.

“I used to be scared people would laugh at me,” she said. “But then in circles, I learned that it was the same for other people, too. Now I feel better, I feel like I have a lot of friends on campus.”

Another addition to Fremont’s restorative justice program is a connection to nearby Horace Mann elementary school. Fremont students lead circles for students to get to know each other and build social skills, reinforcing the restorative lessons already underway there.

During a recent visit, Fremont students met in pairs with elementary children of all ages and laid out the basics of restorative justice circles: how to listen, how to express emotions appropriately, how to snap their fingers to show approval. In a fourth grade class, students tossed a ball around the circle as a way to relax before Fremont leaders started in with the hard questions: What emotion are you feeling right now? What’s something you like about yourself? What’s something about yourself you’d like to improve?

One student said, “I wish I was smart.”

“You’re already smart. Maybe you wish you were smarter,” said Kimberly Higareda, the Fremont High student leading the circle. “We all have things we want to improve about ourselves.”

Later, when students got distracted and started goofing off, Higareda cut them off.

“I’m hearing some of you disrespect your classmates,” she said. “That’s hurtful, to use those words. Try to think before you use words like that.”

The students quieted down and resumed listening. One by one, they shared details about themselves that their classmates might not have known. One girl loves the color of her hair. Another is proud of her friendships. A boy who’s ordinarily shy turns out to be an expert at football. Another boy says he loves his family most of all.

“It was fun because we all got to talk and we played some games,” said Junior Alvear, adding that he learned about classmates he didn’t ordinarily interact with. “It was fun to see everyone all happy.”

Aaron Gray, restorative justice coordinator at Horace Mann, said it’s never too early to teach children about restorative practices. Even at age 4, they can learn how to resolve disputes, build friendships, understand body language, identify emotions and speak respectfully to peers and adults.

Those skills will help them feel safer and more comfortable at school, which in turn leads to better academic performance and an overall improved campus climate for everyone, he said.

“There’s really no way to teach or learn when there’s a lot of conflict in the classroom,” Gray said. “When I first started here, I was dealing with conflicts all day. But now, there’s been a shift. Kids are resolving their own issues and organizing their own RJ circles. It’s amazing to see. There’s been a huge change in the culture.”

Joshua Watan, a freshman at Fremont High, credits the school’s restorative justice program with helping him make a smooth transition from middle school. Although he was popular and athletic in middle school, he often felt pressured to maintain a certain image and was afraid to fail. That left him extra nervous about the challenges that awaited in high school, he said.

But in Fremont’s restorative justice circles, which are available to all ninth graders, he finally felt some relief. He learned to express his doubts and fears, and was comforted to learn that many of his classmates felt the same way.

“I learned how to talk about my emotions, which helped me gain confidence,” Watan said. “And I learned a lot about my classmates, especially the quiet ones. I think RJ circles teach you how to be yourself, how to feel good about yourself.”

Chaterji, Fremont’s restorative justice facilitator, said she’d encourage all schools to adopt some form of restorative practices that go beyond conflict resolution. But she noted that many teachers have been doing it informally for years, long before restorative justice became a buzzword.

“Teachers already have these skills. It doesn’t have to be imposed on them,” she said. “We don’t need to reinvent the wheel. … We can leverage the wisdom that’s already there. We can all do circles.”

Hear a conversation with one of the students involved in Fremont High’s Restorative Justice program in our Education Beat podcast.