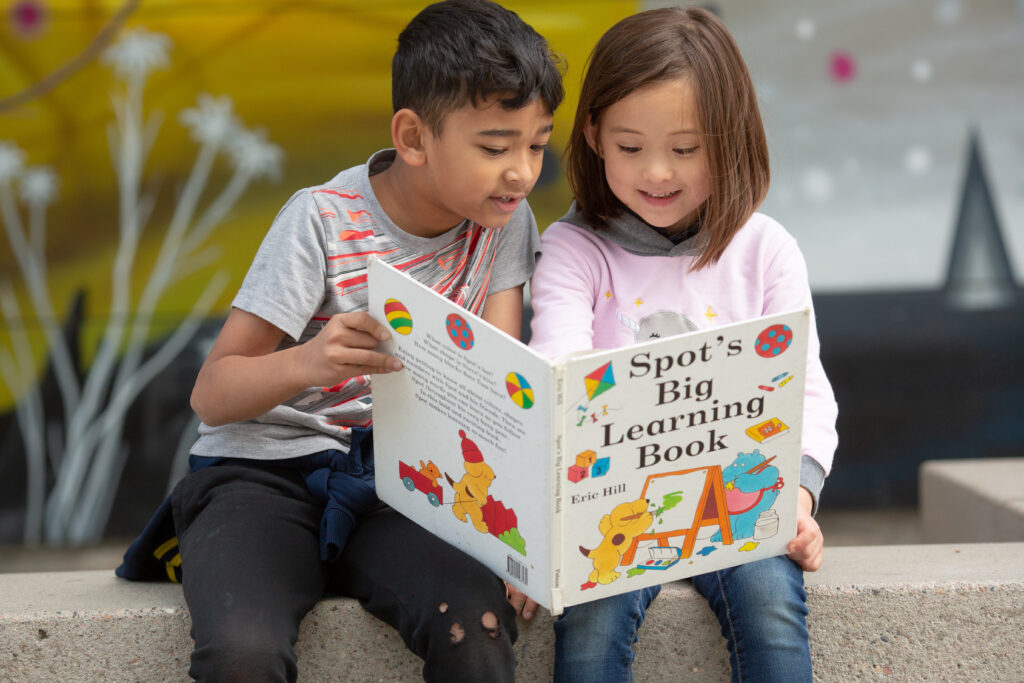 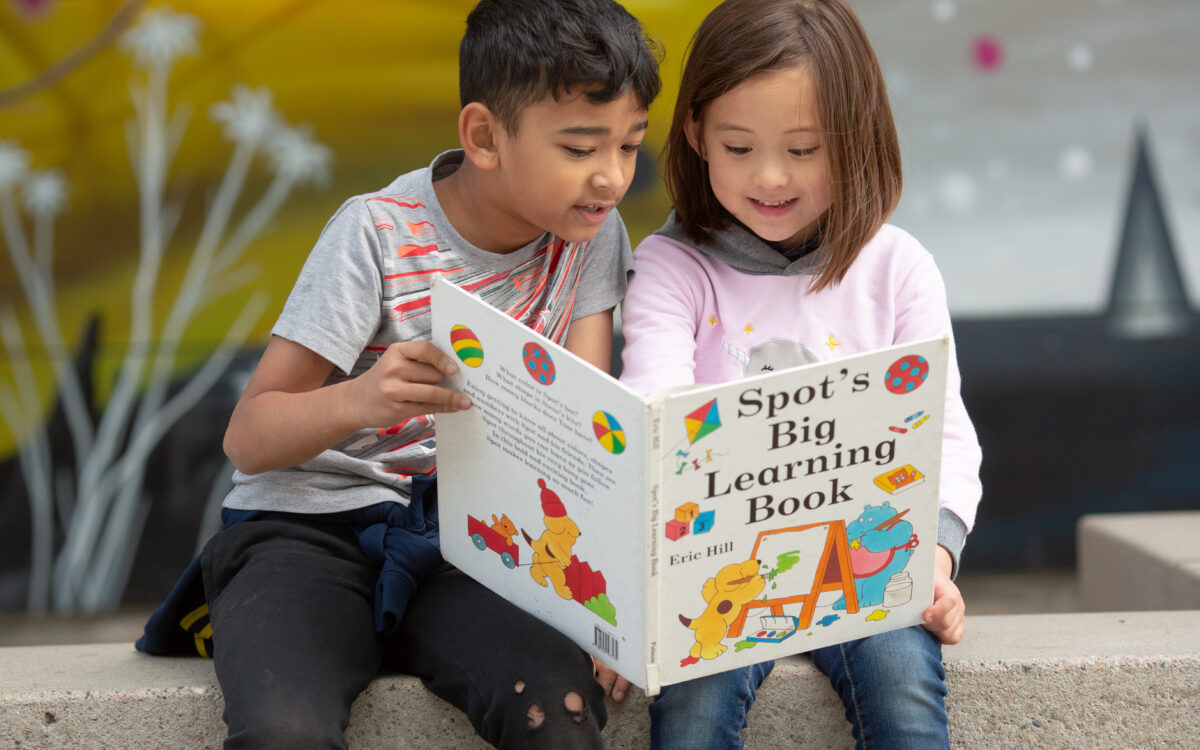 Credit: Allison Shelley for American Education
The screening test would be given to all kindergarteners and first graders in California.

Credit: Allison Shelley for American Education
The screening test would be given to all kindergarteners and first graders in California.

With a major push from Gov. Gavin Newsom, California is moving closer toward screening all kindergartners and first graders for dyslexia — a reading disability that affects up to 15% of the U.S. population, including Newsom himself.

Newsom’s proposed budget, unveiled earlier this month, includes $10 million for dyslexia research at the University of California San Francisco, where scientists are studying the neuroscience behind the condition and creating a free screening test that would signal if a child is at risk for the disability.

The $10 million follows $15.2 million in the current budget and $3.5 million the previous year, for a total of $28.7 million. Also in the pipeline is a Senate bill that would require the state to start screening all kindergartners, first graders and second graders for dyslexia starting in the 2022-23 school year. These efforts are joined by a $4 million pilot program at the Sacramento County Office of Education meant to improve the way schools across the state identify and help children with dyslexia.

Dyslexia assessments vary by district, but usually schools don’t test students for reading disabilities until third or fourth grade when they’re already lagging well behind their peers in literacy skills. Typically, if a school identifies a student with dyslexia, they’ll either get a 504 plan (legal accommodation that allows them extra time on tests) or a special education plan that provides anything from an hour or two a week with a reading specialist in a small group, to several hours a day in a special education classroom.

But identifying dyslexia early, advocates say, can dramatically improve students’ outcomes. Students who receive services at a young age can avert a slew of problems associated with reading difficulties, such as low self-esteem and disengagement from school. And the sooner they start, the easier it is for them to learn.

For children with dyslexia who don’t get help, the hurdles can be daunting and reach far beyond the classroom. They’re less likely to succeed in school and more likely to engage in risky behavior, research shows. Only 70% of students with learning disabilities graduate from high school, compared with about 80% of their nondisabled peers, according to the National Center on Learning Disabilities. A 2000 study of Texas inmates found that 48% had dyslexia, more than twice the rate of the population at large.

Among those championing the new screening tool is Linda Darling-Hammond, chair of the State Board of Education, whose two children have dyslexia.

“Screening can make a huge difference in the well-being of children,” Darling-Hammond said. “We’re looking at an approach that’s unique and based on the new neuroscience of dyslexia. … This kind of research will have effects that go beyond California and benefit children nationally.”

By getting the extra help they needed, Darling-Hammond’s children were both able to thrive in school and even graduated from Ivy League colleges, she said.

California’s screening tool is a 20-minute digital test, called Multitudes, that measures how well a student can recognize letters and sounds. It won’t diagnose dyslexia, but it will signal that the child needs extra help learning to read, often with an approach based on phonics and sounding out words instead of guessing words based on pictures or context.

Dozens of other states already test kindergartners for dyslexia, but California’s efforts have hit a few roadblocks. In 2015, Assembly Bill 1369 would have mandated dyslexia screening for all third graders, but the bill failed after the California School Boards Association, California Teachers Association and Special Education Local Plan Area Administrators voiced their opposition.

Their argument is that the screening test would over-identify English learners, who might be able to recognize sounds and letters in their native language but not in English. Those children would be funneled to special education whether they need it or not, they said, creating an unnecessary stigma and costing school districts extra money.

Those groups do not appear to have changed their stance. The school boards association is opposed to the current bill, as well, arguing that it’s unfair to English learners. Even though UCSF scientists are creating dyslexia screening tests in multiple languages, tuned to the cultural and phonetic nuances of each language, it still won’t be enough to ensure English learners get the same benefits as children who speak English fluently, the association said. Almost 60 languages are spoken in California schools, according to the Public Policy Institute of California, far too many for researchers to address.

“California’s schools serve students from many language backgrounds. It is impossible to provide assessments in every language,” the organization wrote in June to the bill’s author, state Sen. Anthony Portantino, D-Glendale. “If only the language(s) mostly common at a school site are provided, students could be left behind.”

Should we screen all kids for dyslexia?

Renee Webster-Hawkins shares how her son went years without help for his dyslexia – still reading at a kindergarten level in sixth grade.

EdSource · Should we screen all kids for dyslexia?

But for parents like Renee Webster-Hawkins, not pushing forward with dyslexia screening is a greater equity concern. Her son struggled to read in elementary school, but the teachers and specialists at his school in Sacramento never identified him as dyslexic. By sixth grade, he was still reading at a kindergarten level and deeply despondent about school.

Webster-Hawkins eventually hired a private educational consultant who identified her son as dyslexic, and she sent him to a private school that specialized in learning disabilities. Her son learned how to read and quickly caught up to his peers academically, she said. Now an 11th-grader in a traditional public school, he’s taking Advanced Placement classes and gets mostly A’s, she said.

“He used to feel like a failure. He was afraid he’d end up in juvenile hall, that he wasn’t worth anything,” she said. “Now we’re talking about colleges. Getting help for dyslexia was life-changing for him, but it shouldn’t have gotten to that point. He should have been screened in kindergarten.”

For too long, California’s approach to learning disabilities has been inconsistent and, for most students, inadequate, she said. The result is that thousands of students, particularly those who are low-income, have fallen behind or dropped out because they didn’t receive the help they need.

“More than 70% of kids who need help don’t get it,” she said, citing California Department of Education special education data. “Unless a parent raises a red flag, we’re missing those kids. They fall through the cracks, and that’s not acceptable.”

Screening should begin as soon as possible, she said, even if the assessments aren’t perfect. The tests can be refined and improved over time, but waiting another year or two will only endanger more students’ academic outcomes.

At UCSF, researchers are taking a comprehensive approach to the study of dyslexia, using MRI scans, genetic tests and other tools to learn how the brain processes language. The research is not limited to reading: They’re studying auditory processing, visual perception, executive functioning, memory and other cognitive skills related to communication, language and learning.

Equity is a focus of the research. Scientists are testing the assessment on students from a wide array of racial, ethnic and socioeconomic backgrounds to ensure it’s effective for all students.

“It’s a social justice issue. Literacy is a huge predictor of one’s outcome in life,” said Dr. Marilu Gorno Tempini, co-director of the UCSF Dyslexia Center. This funding, she said, “is such an opportunity. It’s a field that has been underfunded too long, with consequences that can be catastrophic for low-income communities. To get to where we are now, it’s an exciting moment.”