In another measure of the pandemic’s corrosive impact on learning, California students performed significantly worse in 2022 on Smarter Balanced, the state’s standardized test.

To look up a school or district’s performance on the California Assessment of Student Performance and Progress, or CAASPP, go to EdSource’s site where you can see scores and graphics showing statewide trends.  Student scores are categorized in four achievement levels that indicate whether a student has exceeded, met, nearly met, or did not meet the standards, in grades 3-8 and 11.

The pandemic’s effects were widespread; the scores fell roughly the same – 5  to 7 percentage points among most racial and ethnic groups. But disparities in scores among those groups were already chasmic, and the declines in 2022 wiped out six years of slow, steady progress since Smarter Balanced was introduced in 2014-15. The 69.4% of Asian students who scored at or above standard in 2022 is more than triple the rate for Latino and Black students.

Moving up its original release date, initially set to be released with other state data in December or January, the California Department of Education instead announced the results on the same day as the release of scores on the National Assessment of Educational Progress or NAEP. The results of the different tests cannot be compared, but point to the same conclusion: Covid severely set back progress nationally and in California, indicating it will take extra resources and attention, and probably several years, to recover from the impact. (See story on NAEP scores)

“Now is not the time to take our foot off the accelerator when it comes to doing everything we can to help all our students progress toward mastery of our learning standards and thrive in every way in school,” said California State Board of Education President Linda Darling-Hammond. 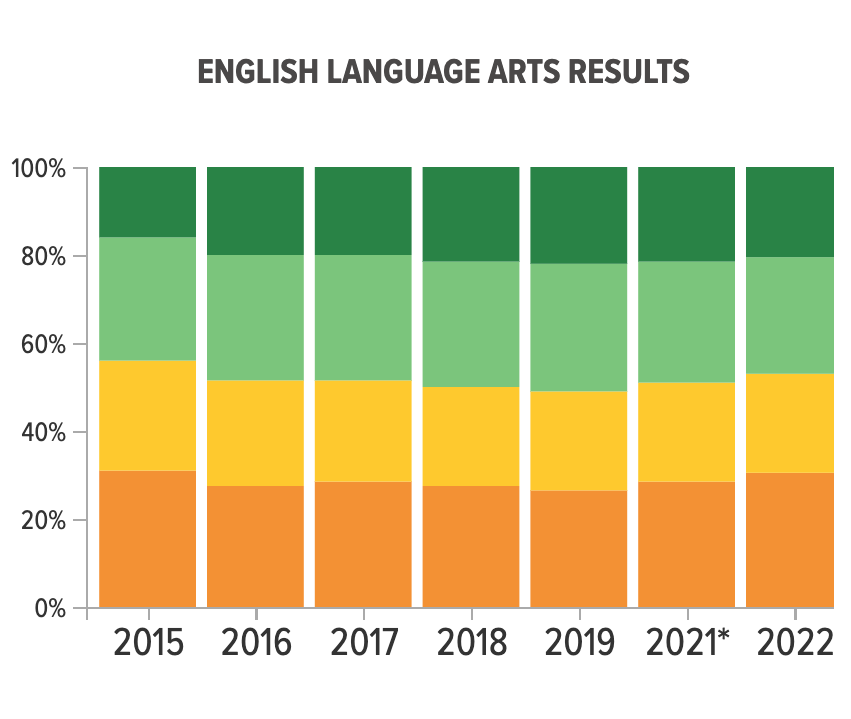 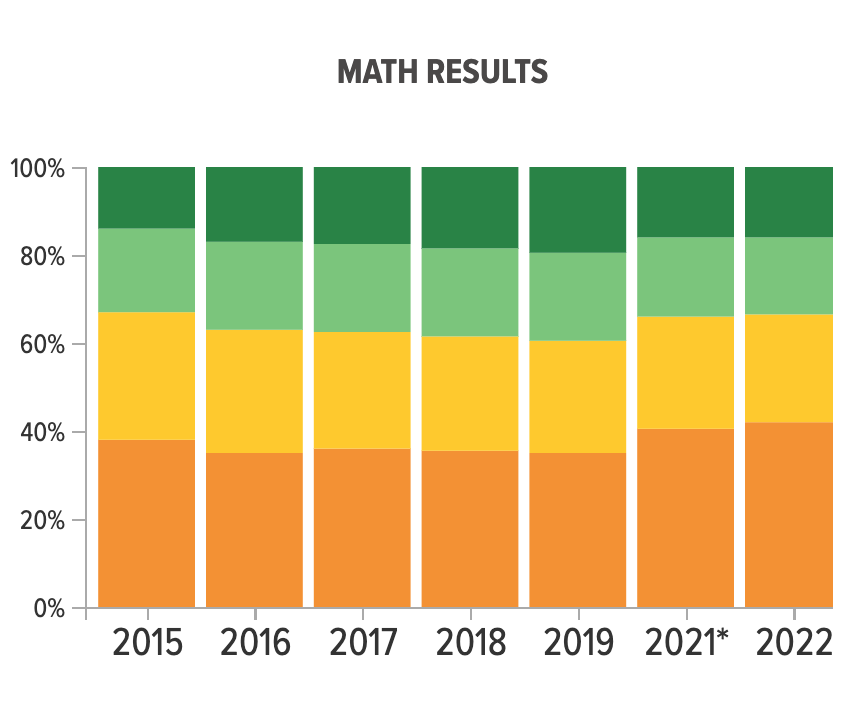 “Our situation with reading achievement was bad before; now it has gotten worse,” said Todd Collins, a Palo Alto Unified school board member and founder of the California Reading Coalition. “The need is even more urgent for a comprehensive state literacy plan, focused on giving districts and teachers better training and curriculum and backed by what’s been successful in the states that have succeeded.”

“We have unacceptable rates across the board, with a persistent, continuing problem in math,” said Rick Miller, CEO of the CORE districts, a nonprofit learning partnership of California school districts representing more than a million students. “It existed before the pandemic, and the pandemic’s impact was most acute for those who needed the most help.”

He and others said it wasn’t surprising that learning declined more in math and in English language arts. Remote learning showed the importance of high-quality classroom math instruction. 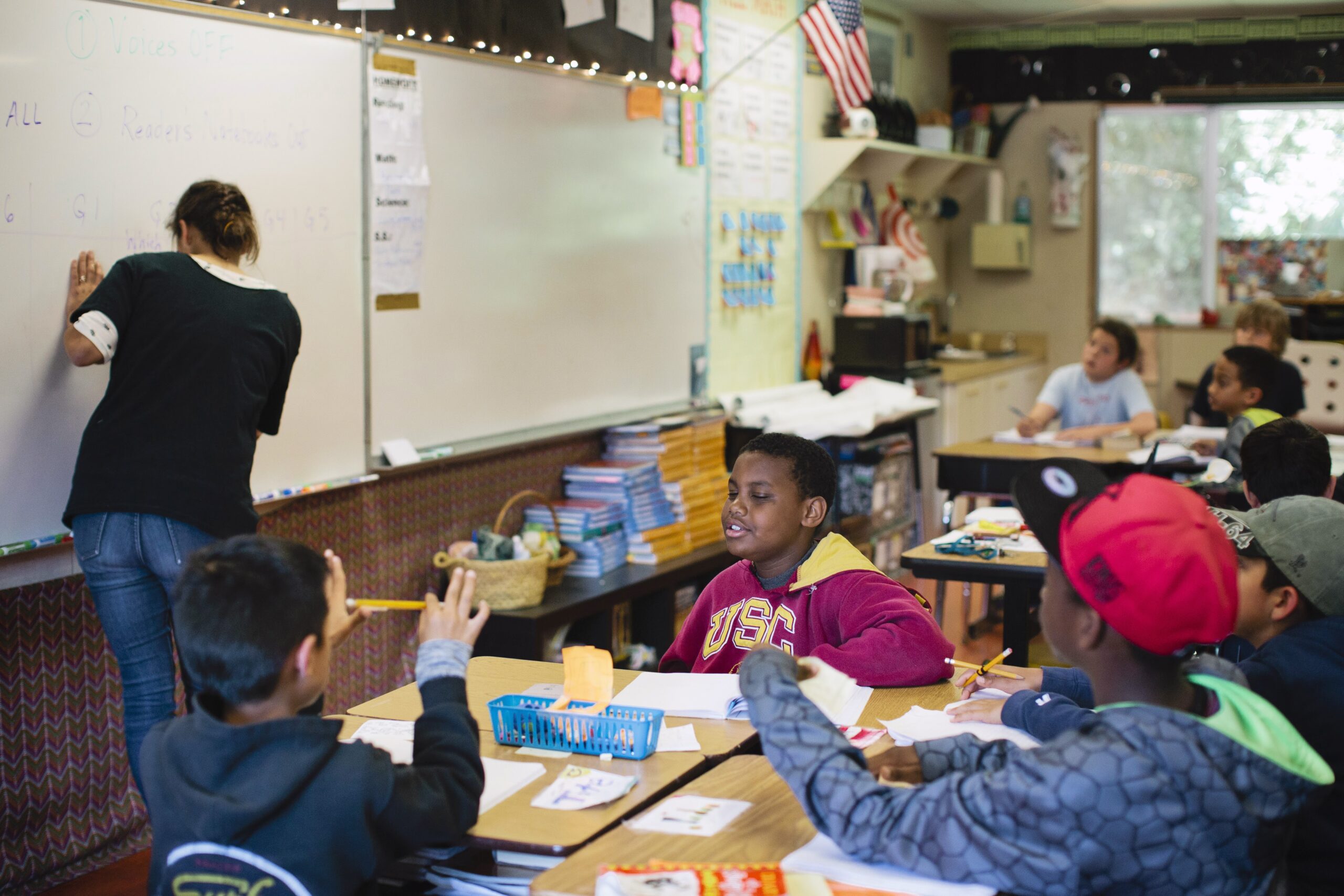 Scores nationwide crater on national math test, California’s not quite so much

“Students who were bored were more likely to pick up a book to read than do math,” Miller said.

Peggy Carr, commissioner of the National Center for Education Statistics, which administers NAEP, agreed. Abundant research “shows that math is just simply more sensitive to schooling. You really need teachers to teach math,” she said. “Parents and the community are more comfortable helping students with reading.”

Contrary to the statewide pattern, in Long Beach Unified,  students meeting state standards in English language arts dropped 11 percentage points, nearly triple that of  math. To address that, the district is expanding preschool to better prepare students for TK and kindergarten and shifting its instructional focus to phonics and phonemic awareness, an approach that helps students learn to read by connecting letters to sounds. Third and 4th grade both had the highest percentage of students not meeting standards.

The district has also hired instruction and intervention coordinators across its elementary and middle schools and has provided small group tutoring across grades handled both by teachers and contracted providers,  Superintendent Jill Baker said.

Heather Hough, director of Policy Analysis for California Education, described the scores as a clear signal that education in California must change radically if students are to overcome the challenges wrought by school closures and the pandemic. The stakes are especially high for students who were disproportionately impacted, such as Black and Latino students and those from low-income families, she said.

“What we have been doing has not worked,” she said. “We’ve been talking about accelerated learning, but we have no experience with accelerated learning, and our track record with closing the achievement gap is not good. … We cannot revert to business as usual because that did not work. This requires large-scale, systemic change.”

The state’s recent infusion of money into K-12 schools will likely not be enough, she said. The changes need to be widespread and long-lasting, particularly regarding staffing. Prospective school counselors, for example, need to know their jobs will exist a decade from now.

California’s overall results were better than the average of nine of the 10 other Smarter Balanced states that had released scores. Their average decline in reading was 5.4 percentage points and 7.3 percentage points in math. Those states include Oregon (down 7.4% in reading, 8.8% in math) and Washington (down 9.3% in English language arts, 11.3% in math), according to data for grades 3 to 8 collected by Doug McRae, a retired standardized test publisher who lives in Monterey. Several states either offer the test in 10th grade or use the SAT or ACT as an alternative to Smarter Balanced in 11th grade.

California skipped Smarter Balanced statewide during two years of Covid. The state canceled the test in spring of 2020, when all schools closed and switched to remote learning, and made the statewide test optional in 2020-21.

Most districts in California continued in remote learning for much of, if not all of, 2020-21. Covid created the most havoc in low-income Black and Hispanic neighborhoods, which also had the least access to the internet. Chronic rates of student absenteeism continued in the last school year.

Megan Bacigalupi, director of CA Parent Power, an Oakland-based nonprofit that grew out of parents’ frustration with school closures, pointed to prolonged remote learning in California as the cause of lower test scores.

“Any parent who was home with their child … saw what a failure online school was. Parents should look at these scores and know that statewide leaders failed our children,” she said. “Parents should also ask hard questions of their school districts. … We should be treating this as a statewide crisis.”

Some school districts saw their scores improve during Covid. Cold Spring School District in Santa Barbara, a TK-6 school with about 200 students, was a high performing school prior to the pandemic and most scores inched higher in 2022. In 2019, for example, 67% of students exceeded the state standard in reading, and three years later that number rose to 70%.

Superintendent Amy Alzina attributed students’ success to the school staying open for most of Covid. The district had recently endured wildfires and a deadly mudslide, and Alzina knew that the school had provided stability and a refuge for students experiencing hardship. She and the board decided to reopen in September 2020 despite the risks.

In addition to masks and social distancing, students attended classes outdoors throughout the year, even in rain and cold. The PTA purchased jackets for teachers and others who needed them.

State Superintendent of Instruction Tony Thurmond said data did show an encouraging sign from limited data. Although districts with fewer than a quarter of the state’s students took for 2020-21 test, the state was able to track the scores of those who did using unique student identifiers. It found that their scores began to rebound by spring 2022, especially in reading, from the even larger losses recorded in the spring of 2021 test. But that did not happen in math in eighth grade, where the decline continued from 2021 to 2022 and further dropped in 11th grade in both English language arts and math. 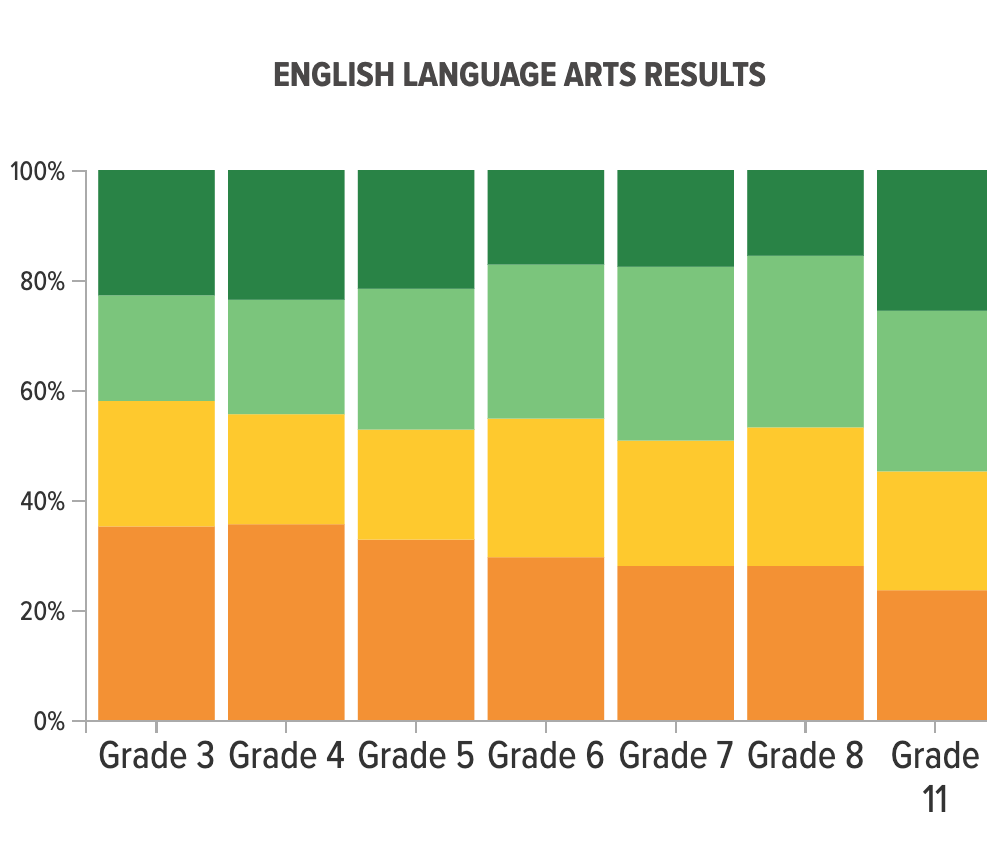 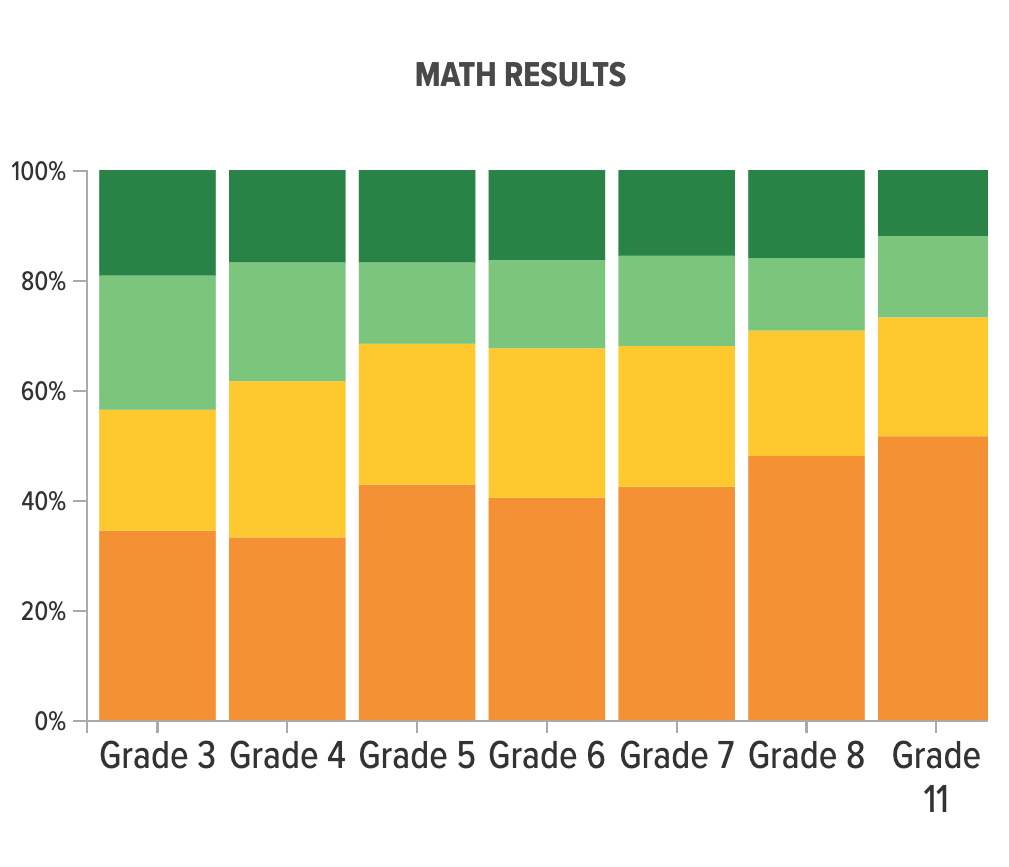 State officials stressed that the current state budget alone includes more $12 billion in one-time and ongoing funding that districts can use to remediate or accelerate learning and for mental health. This includes $7.9 billion in a Learning Recovery Block Grant, tied to a district’s proportion of low-income students, and $4 billion for low-income districts to add three hours per day for after-school learning and six weeks of added learning. In addition, they have $15.3 billion that Congress funded through 2024 under the American Relief Plan Act.

“California’s investments in important initiatives, such as high-dose tutoring, professional development for teachers, and expanded learning time, and in such areas as mental health and wellness, are critical to lifting up academic performance across the board while supporting students’ well-being,” Darling-Hammond said in a statement.

California has started College Corps, which has recruited 1,500 college students to tutor in 33 school districts and community after-school programs, but there aren’t enough tutors to meet the demand. Los Angeles Unified has been slow to roll out tutoring, and San Diego Unified is relying on teachers to do it after school.

Anticipating learning loss issues, Lodi Unified Assistant Superintendent Robert Sahli said the district initiated student supports during the pandemic and expanded efforts with a return to in-person instruction. These include tutoring, expanded afterschool and summer opportunities, teacher training on literacy, and the adoption of a new K-8 math curriculum.

Miller said additional resources matter, but one-time funding alone won’t fix a long-term math problem. He cited the need for high quality curriculums and continuing professional development for existing teachers and those in training, and facing up to a long-existing “math phobia” among early elementary teachers.

Also released Monday were the science assessments and the English Language Proficiency Assessments for California, the ELPAC, measuring the progress of English learners.

Students have not performed well on the science test, which is aligned to the Next Generation Science Standards and is given in fifth, eighth and each year in high school. The good news is that districts did not lose ground in 2022; 29.5% of students met or exceeded standards, compared with 29.9% in 2019, the first time the test was given.