Wildfires delay beginning of school year for some rural California schools, some for the second year 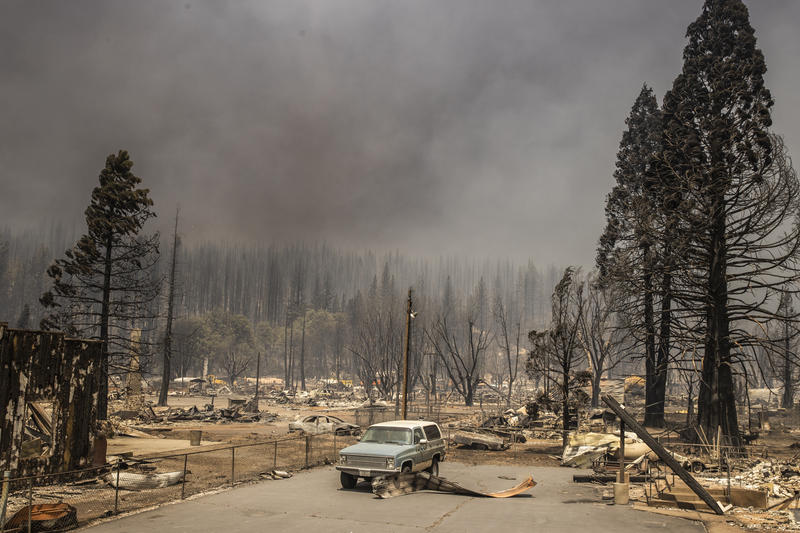 Credit: Stephen Lam / San Francisco Chronicle / Polaris
A general view of the town of Greenville destroyed by the Dixie fire on Aug. 5, 2021.

Credit: Stephen Lam / San Francisco Chronicle / Polaris
A general view of the town of Greenville destroyed by the Dixie fire on Aug. 5, 2021.

Wildfires raging across Northern California are once again endangering communities and putting school reopening plans on hold as school officials focus on locating evacuated families and connecting them with food, shelter and other needed services.

In Greenville, a town of 1,100 residents in Plumas County, a charter school learning center that served 50 students was destroyed and the elementary and high schools were damaged when the Dixie fire razed most of the town last week.

According to the school’s Facebook page, the Greenville High School gym and woodshop have minimal damage, as does the playground at the Greenville Elementary School.

“To me, this represents hope and a place we can all return to someday in the future,” said Jennifer Scheel, principal of both the elementary and high schools, in the Facebook post. “Greenville Staff looks forward to this day!”

The Dixie fire, which has burned in Plumas, Butte, Lassen and Tehama counties, had consumed more than a half-million acres and destroyed 1,045 structures by Tuesday evening. It is 30% contained.

So far this year, 6,311 fires have devoured nearly a million acres of land in California, according to Cal Fire. For many school districts in rural areas of the state, the threat of wildfires has become an annual event.

“We were in exactly the same spot last year with the Sheep fire,” said Patricia Gunderson, superintendent of the Lassen County Office of Education. Gunderson said the Sheep fire, which consumed 29,500 acres, threatened the same two school districts endangered by the Dixie fire this year.

Last school year, some Nevada County schools were closed on the second day of school when the Jones fire caused 4,000 residents to evacuate. Three or four of the schools stayed closed for most of the week, said Scott W. Lay, Nevada County superintendent of schools.

“It’s becoming part of our landscape now in California,” he said. “Now we have to deal with the smoke.”

So far, the Plumas Charter School learning center in Greenville is the only school destroyed by the fires raging through Northern California. The school, which has 350 students, has students learning at home and others at learning centers scattered throughout the county. Two of the school’s learning centers also are in communities threatened by the Dixie fire, said Taletha Washburn, executive director of the school.

“It’s constant,” said Taletha Washburn, executive director of Plumas Charter School. “We are going to have a lot of kids who don’t feel safe.”

Although damage to Greenville’s elementary and high schools is minor, it’s the damage to the town’s infrastructure — water, electricity and roads — and poor air quality that are likely to delay the schools from reopening in-person for the fall semester, said Kindra Britt, spokeswoman for the California County Superintendents Educational Services Association.

That was the experience of Paradise Unified, which lost four of its nine campuses in 2018 when the Camp fire raged through the town of Paradise and surrounding communities in Butte County, killing 86 people and destroying nearly 9,000 homes.

The five campuses left standing remained closed for months as workers removed dead trees around schools, cleaned soot and ashes from classrooms, replaced landscaping, repainted walls, purchased new furniture and erected playgrounds. Because fires often leave behind toxins in water, air and soil, they were tested at all campuses and found safe before students were allowed back.

Now, some of the same students who narrowly escaped the fire in Paradise are evacuating their new homes. Plumas Charter School alone has at least four students who moved to Plumas County after Paradise burned.

They and other students are experiencing increased anxiety because of the fires and will need counseling, Washburn said. The Dixie fire, which has raged for almost a month, is causing long-term stress for students and staff, she said.

“It’s constant,” Washburn said. “We are going to have a lot of kids who don’t feel safe.”

In Tehama County, only a few students in the eastern part of the county have evacuated their homes, said Richard DuVarney, Tehama County superintendent of schools.

DuVarney expects county schools to remain open even if smoke continues to linger over the county. “We have closed in the past for smoke,” he said. “I think the general feeling in the county is the safest place for kids is in school with our filtration systems, which are as good if not better than those in homes in the area.”

Gunderson agrees. Most of the schools in Lassen County received air purifiers and upgraded air filters last school year to mitigate the threat of Covid-19. Now the technology will be used to keep students in school and safe from the poor air quality created by the wildfires.

Although many schools in the county are impacted by the smoke, only two school districts were directly affected by the fire, Gunderson said. Westwood Unified School District, which serves 189 elementary and high school students, was in a mandatory evacuation zone on Tuesday, and Janesville Union Elementary School District, a one-school district with 386 students, was under an evacuation warning.

After learning most of the families in the district had been displaced, Westwood Unified officials decided to postpone the beginning of the school year — previously scheduled for Aug. 24 — until two weeks after the evacuation order is lifted. Janesville Union students are scheduled to return on Aug. 23. So far there are no changes to that plan.

“We hope we can get our kids back in school and have some level of normalcy,” Gunderson said.

On Monday, Trinity Alps Unified board member Jim Morey was hunkered down in his home under an evacuation warning because of the Monument fire. The wildfire had burned more than 62,000 acres in Trinity County by Wednesday morning and destroyed 31 properties. The fire, which is only 3% contained, is threatening numerous communities and their schools.

“The smoke is terrible,” he said. “We are hesitant to open schools, which are scheduled to open next week.”

There are 695 students at the district’s two schools — Trinity High and Weaverville Elementary schools. About 30 of the high school students come from nearby communities.

Morey is concerned that these students will not be able to get to the high school because the fire is burning alongside state Highway 299, the only route to the school from some communities. Caltrans has warned that the highway could be closed for a month because rock and debris must be cleared from the roadway.

Morey says there are a few possible contingency plans to ensure students can continue learning if they can’t get to school, including moving them to independent study or starting a small school in rented office space in another community. But he isn’t sure there will be electricity and internet connectivity to make independent study feasible.

“A lot of the students were not in independent study last year, and they aren’t set up for it,” he said. “We would have to get them the computers so they could log in and do the coursework.”

In Nevada County, Lay can see the plumes of smoke from the Dixie fire through his office window at the Nevada County Office of Education. But he has also been able to watch the planes coming and going from the nearby air attack station set up to battle the River fire.

In Nevada and Placer counties, the River fire has burned more than 2,600 acres and destroyed 88 structures, causing hundreds of families to evacuate, although no schools have reported damage. By Tuesday evening the fire was 85% contained.

Lay expected to spend the weeks before school reopened this year finalizing a countywide independent study plan, reviewing Covid-19 requirements and ensuring mandated teacher training was completed. Instead, he has been helping school districts deal with evacuations.

Last week he accompanied Chicago Park School Principal Katie Kohler and her husband, Jordan, down roadways lined with burning embers to see if the school was still standing. Along the way, the group stopped to allow Jordan Kohler, a former firefighter, to put out spot fires.

The River fire had burned up to the edge of the school, which was pink with fire retardant, and stopped. Several homes and industrial buildings around the school had burned, Lay said.

Five miles away, the River fire had also stopped abruptly at the edge of the Colfax Elementary and Colfax High school campuses, although it caused the evacuation of hundreds of the schools’ families and destroyed the homes of 12, including the home of a teacher, Principal John Baggett said.

“We pushed it one week to provide child care for families, to be the reentry center today and to reset and have a good start,” Baggett said Monday. “People are in crisis and need a moment to figure out their next move and figure out where they are going to live.”