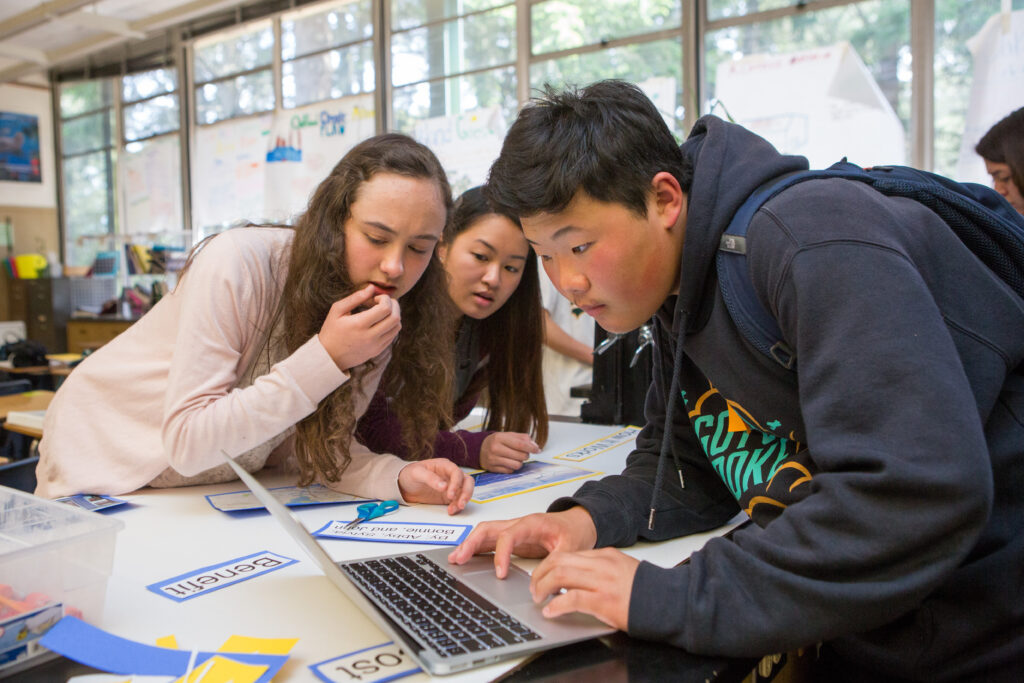 After 18 months of distance learning, I took a breath before the start of this school year. What would the new normal look like? I feel like I’m still holding my breath, waiting for the proverbial shoe to drop that comes in the form of an end-of-semester report card.

As the mother of a newly minted middle school student and a high school junior, I knew this year would test my personal code of ethics about grades: Effort and improvement should supersede a letter. It’s a mantra my husband and I have long drilled into our children that’s built on the belief that it’s more important to learn to love learning than it is to chase a check mark. Personal growth should win the day.

During EdSource’s latest Roundtable series, “The Future of Grading: When Failure is Not an Option,” educators and experts acknowledged the need to reevaluate how students are graded.

It’s hard as a parent to stay true to your word about grades when you know California’s college admissions stack your children against their peers — not just those in the state but the ones they sit next to in class. A huge shortage of seats at California’s public four-year institutions has made applying for college feel like a scene from the “Hunger Games.”

A study by the College Futures Foundation estimates that the number of students who meet University of California and California State University admission requirements but can’t enroll because of the limited seats could nearly double over the next decade. The shortfall is particularly pronounced in the Los Angeles region, where UCLA this year posted an admission rate of about 10% for California freshman applicants. (In 1995, it was as high as 42%.)

I try not to think about it and instead have committed to prioritizing the mental health of my children, particularly amid a pandemic that has contributed to learning loss and stunted socialization nationwide. Last week, the U.S. surgeon general issued a public health advisory on an emerging mental health crisis among youth: Symptoms of depression and anxiety have doubled during the pandemic.

Grading, they say, should focus on how you finish the race, not how you start.

I’ve seen the anxiety build in my own home this year despite my attempts — from tears when a grade drops from an “A” to a “A-” to the confidence-crushing defeat when hours of work and study fail to deliver an expected outcome. Even encouraging one-on-one communication with a teacher about a lesson or a grade can send my kids into a tailspin in ways I’ve not seen before.

Nidya Baez, assistant principal at Fremont High School in Oakland Unified, said that during the pandemic, teachers had to rethink how they evaluated students. It’s only natural that it continues, she says, as the stress of grades, test scores and being compared to peers takes its toll.

Some students with high GPAs and test scores “are still walking out of your classroom feeling pretty defeated,” she said during last week’s Roundtable. “You talk to them, and they are just devastated.”

The pandemic has accelerated the debate among educators that began years ago that questions whether traditional grading methods are failing students.

While some teachers and districts have responded by moving toward the elimination of Ds and Fs, a controversial move many educators do not agree on, the overriding goal is to offer meaningful feedback and encouragement. Grading, they say, should focus on how you finish the race, not how you start.

“You can’t say, ‘I believe in social and emotional learning; I believe in resilience, in bouncing back, and then turn around and use the average and say…‘I’m going to punish you today for mistakes you made three months ago,’” Douglas Reeves, author of dozens of books about education leadership and student achievement, said during last week’s Roundtable. “You can’t use the average.”

The practice of assessing students based on what they’ve learned, not on how they perform on tests or whether they turn in homework on time, is known as competency — or mastery-based learning. In addition to eliminating the average, it involves allowing for test retakes, revisions to essays and other fluid measurements that allow a student to demonstrate progress and effort toward meeting a standard.

At Lindsay Unified School District, leaders 10 years ago implemented a performance-based grading system that fosters a “growth mindset,” which became a common mantra in many districts throughout the pandemic. Whether grading based on competency requires more work on the part of teachers, Guadalupe Alvarez-Smith, the district’s curriculum and instruction specialist, says teachers always have to work hard, no matter the system.

“It is a lot of work differentiating and customizing, but is it more work?” Alvarez-Smith asked. “No, because that’s all we’ve known.”

Grading reform is not about lowering standards or coddling kids, educators echoed last week, but rather how to improve learning and, ultimately, how to be a better teacher. It also doesn’t have to be complicated — one or two small steps can be all a teacher needs to get going. Lydia Rocha-Salazar, who works with California’s CORE districts, a collaboration between several of the state’s largest school districts, said teachers evolve in their approach once they commit to change.

“We think there is a natural progression that can take place within the work that will serve both the teachers and the students well,” said Rocha-Salazar, a senior improvement coach.

Mauricio Rangel, a science teacher at Overfelt High School in San Jose, said it’s difficult to make this change in isolation. At Overfelt, the shift in grading began during the pandemic when a handful of teachers started to try things that they otherwise may not have had the motivation to try during pre-pandemic times. They began offering retakes on assignments, retesting and getting rid of the average.

Rangel said he and his peers are better for it. And as for the students, he said: “I have much more clarity of their content knowledge and skills than I ever have before.”

At EdSource, we’ve been chronicling education reforms long before the first Covid-19 diagnosis. As the pandemic took hold, we saw the potential for how distance learning could alter learning inside the classroom for years to come.

How teachers grade students is shaping up to be one of those reforms in which the pandemic created a window of opportunity. Time will tell.