What's next for California education? New laws and vetoes 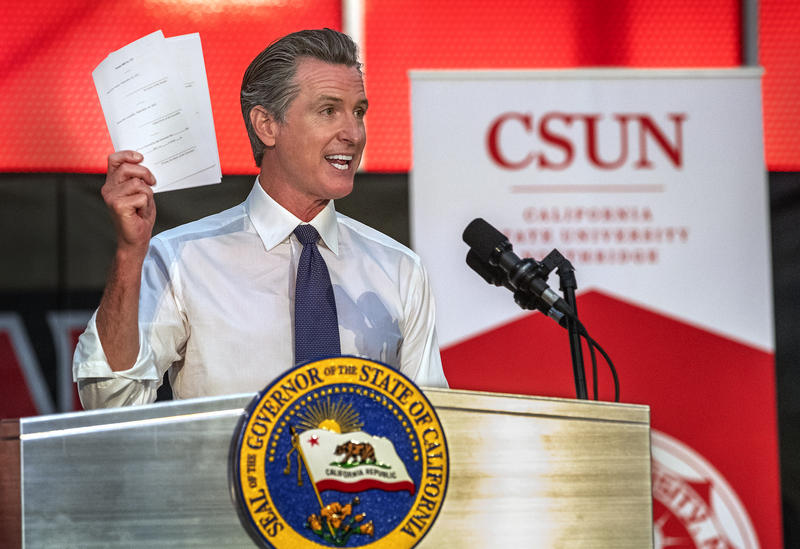 Sunday, Oct. 10, was the deadline for Gov. Gavin Newsom to sign or veto bills passed by the Legislature in this session.

Bills Signed by the Governor

This year, the Legislature’s focus on education was on Covid-related bills and on a record-high state budget, which includes tens of billions of new and one-time spending, along with policy decisions on how to spend the money. Nonetheless, it also passed unrelated, important bills.

(For a deeper analysis of the 2021-22 state budget, see: Unprecedented California budget to usher in sweeping education changes.)

Here is a roundup of notable education-related legislation with links to some of our coverage and more information about the bill.

Bills signed by the governor

With the governor’s signature, this bill makes California the first state to require all students to complete a semester-long course in ethnic studies to earn a high school diploma.

This pair of bills extend a state program that seeks to provide broadband access to Californians via grants that are funded by a tax on phone bills.

SB 14 changes the Education Code to allow for absences due to mental and behavioral health to be counted as excused absences. SB 224 requires mental health instruction to be included in existing health education courses at middle and high schools. AB 309 asks the California Department of Education to consult with the state Department of Health Care Services to develop voluntary protocols for schools in referring students for mental health support.

This bill requires school districts to provide classified staff with the same advance notice of layoffs that teachers and administrators must receive.

These bills streamline the process for school districts and charter schools to identify homeless students and their families. They were introduced in response to a state audit that found schools undercounting their homeless students.

For more about these bills and the audit that prompted them:

This new law, which went into effect immediately, provides school districts, charter schools, county offices of education and other local education agencies and their governing boards the flexibility to conduct public meetings virtually during a declared state of emergency such as a pandemic or wildfire.

AB 469 requires all students, by September 2022, to submit a Free Application for Federal Student Aid (FAFSA) or a California Dream Act application.

AB 1111 requires the 116 community colleges to adopt a common course-numbering system that ensures that similar courses at any California community college are aligned to fulfill the same transfer requirements for CSU and UC systems.

This bill extends a pilot program that allowed community colleges to offer baccalaureate degrees and allows colleges to increase the number of programs they offer from 15 to 30 per academic year.

For more about this pilot program:

This bill requires that only nonprofit, regionally accredited institutions are allowed to provide higher education in California prisons. It also amends the state’s Penal Code to recognize the full-time college enrollment of an incarcerated student as full-time work or a training assignment.

This law aligns the Migrant Child Care Alternative Payment program with other voucher programs, a move that will streamline access to child care subsidies for migrant farmworkers.

This bill requires community colleges and schools serving students in grades 6-12 to stock 50% of the school’s restrooms with feminine hygiene products and prohibits a public school from charging for any menstrual products provided to pupils.

Bills vetoed by the governor

This bill would have simplified the Cal Grant program, which has been criticized as being overly complicated, and would have expanded aid to 160,000 additional students. Community college students would have benefited the most because they would no longer have needed a minimum GPA to be eligible for financial aid.

Part-time and temporary faculty at California’s community colleges are currently limited to a course load of no more than 67% of a full-time equivalent load. This bill would have lifted that cap to 80% to 85% of a full-time equivalent load and would have prohibited the community college district from restricting the terms of the negotiated agreement to less than that range.

This bill would have made it easier for children ages 0-3 to get into the California State Preschool Program and streamlined means testing for eligibility.